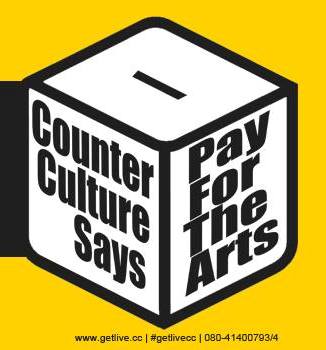 We’ve seen angsty shout-outs about it, and then some memes too. We’ve read emotive write-ups, and perhaps even participated in animated discussions about the issue. The debate, rather the dilemma, about free-gigs vs. charged entry has been ongoing for a while if not yet beaten to death.

I’d say free-gigs don’t work for the artists – even if the artist deliberately puts forward the proposition. It’s good for a launch gig, when you introduce your recipe to the world, but it shouldn’t be overdone. I realize it’s easier for people like me to say this, with fair enough dough in the back-pocket (self-high-five). The scene thrives on enthusiasts, majority of who are very careful about where they put their money – we’ll not talk about WHY.

While a free gig can benefit the fans and non-fans, it actually deprives the band of the money the serious-fans would have paid anyway and the non-fans are anyway not going to buy the merchandise or the CDs. Also, apart from the minority who buy the merch, when it comes to buying the music OR choosing to steal/download it for free, for the majority of the consumers, the choice is too easy to make.

What does the artist stand to gain from, and it all comes down to money, in the end? If not the sale of merch or the album itself, if not being lucky enough to have a sponsored gig, if not a gig well paid for by the venue management – how long can this form of art be served to you for free? Especially when it is full-time serious musicians, not the hobbyists!

All these thoughts are what lead me to appreciate the idea which CounterCulture in Bangalore has come forward with – “Pay For The Arts” (PFTA). So you go to a pub, you enjoy the food and beverage, and pay for it at the end of the day. Nobody taxed you for walking in to the restaurant, it’s what you consumed that you pay for. Perhaps on those lines, PFTA expects us, the audience, to make a voluntary monetary contribution at the end of the show if we enjoyed the gig. It’s not dropping a few coins inside the open guitar-case at the pavement – it’s the appeal to go as generous as you can while staying anonymous too.

We got a chance to converse with Guru Somayaji, Programme Director, CounterCulture, and going by what he had to say, the man totally believes in and supports the idea that PFTA is. Here’s a quote-unquote from the chat:

One of the many #PFTA boxes at the venue

WTS: Who came up with the PFTA idea as implemented in CounterCulture?

Guru: I have been one of the most vocal guys about paying to watch performances. My logic being, one will not go to a PVR and ask to watch a movie for free. The idea for Pay For Your Arts has been brewing with our team for a while. It is just that now we believe is a great time to vocally say it out.

WTS: What gave birth to the idea? What was the need for it?

Guru: This is not a new idea. It has always been practiced in a few countries and a few scenarios. For any economy, and in this case for the artist/musician/venue/spaces/service providers/ rentals and all other ancillary aspects of the performance arts industry to grow, one needs to keep the economy rolling by spending money. We are not talking ridiculous amounts of money, but a few hundred rupees.

WTS: Is it being done by others in India/Bangalore/other countries? If yes, where did you first see it and how large scale was that in terms of audience?

Guru: The pay for your arts scene is big everywhere. As a performing drummer in Glasgow a few years ago, very rarely did we get paid an appearance fee. The common equation was for bands to get together, get a venue, promote the gigs, tell all our friends, families to come and build a fanbase, who would all pay at the door. At the end of the evening, we split the money evenly amongst all the bands . That’s how it was. This happened every gig. This remained in my head and eventually the idea was to bring this into India where the mentality is “I don’t want to pay entry, but I will drink at your bar.” This logic defies basic etiquette towards your arts which is a bit of a shocker.

I recently caught TAAQ at the Ediburgh Fringe. Tickets were GBP 8, and every audience member were so glad that it was their money’s worth to see an Indian band play there. Why don’t we share the same emotion of being happy to pay for your arts?

WTS: Who stands to gain out of it – the venue or the artist?

Guru: Everybody; as you are not creating a stagnant scene. I stand to pay my bills and earn a living, you guys stand a chance to get paid event coverage, the bands stand to see money to buy gear, record new material. On the whole it has to be a win win situation. Most importantly audience gets to see something bigger and better for their money as that is what the cycle of a rolling economy does.

WTS: How often will PFTA feature at CC? Has it got a set frequency, or a particular day of the week, or month, etc?

Guru: There is no current schedule. But there will be a donation box of pay what you want. The collection will be given to the artistes. It’s as simple as that.

WTS: How are the artists appreciating the concept?

Guru: Now is not the current measure, but to persistently do it for some time and hopefully not just the artistes, it’s the audiences who need to give their thumbs up to this. Parvaaz as a band have always had that forward thinking to support any such initiative. It is this differentiator that propelled us to put this campaign out when we did, and we hope you all pay for your arts!