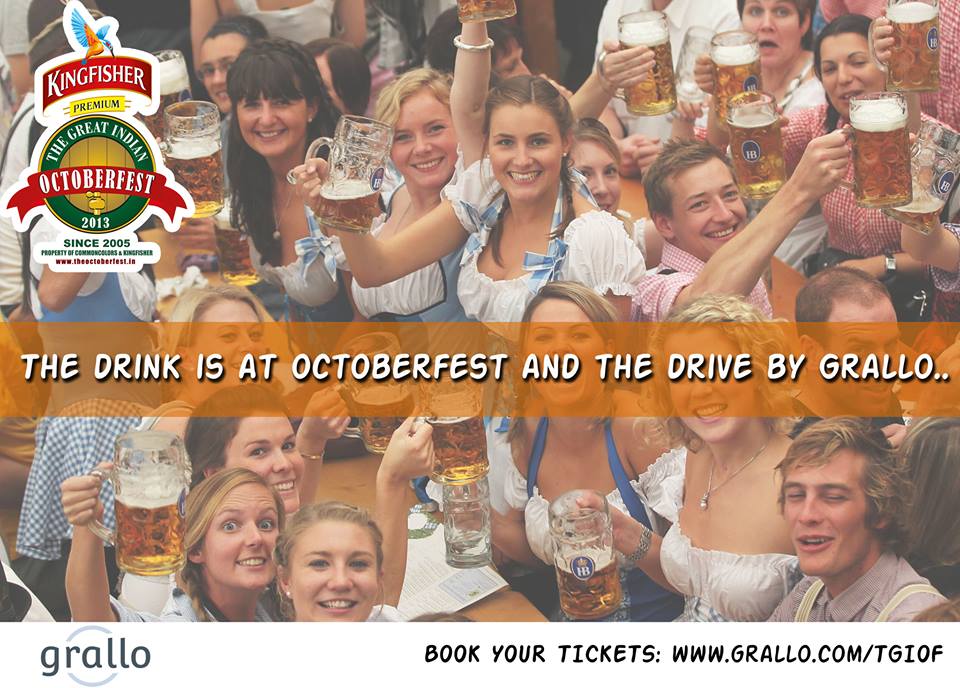 It takes a bit more than a brilliant set of musicians to pull off a truly successful musical extravaganza. Anytime a large number of people are going to gather in the same place, probably at night, drinking and abandoning themselves to music and movement, arrangements have to be made to ensure that injuries accidents and assaults do not occur and tarnish the evening. In particular, it is the journey home that proves troubling because hailing a cab, finding a bus and boarding a train when you just want to lay back and relive the memories of your recent moments of bliss, shouldn’t be a troublesome experience when you’re just bone-tired and want to rest.

To this end, Grallo, a UK-based company has worked out a system of journey-sharing that transcends mere carpooling. Tom, the head of Grallo operations in India elaborates “Grallo came out of being stuck up in a town called Leeds (UK) whilst we were students.  It would cost an exorbitant amount of money to get home and so in 2006 I used Facebook to a create a journey-sharing site which was called ‘Skint Traveller’. The group gained traction, my interest in the environment and society expanded and a couple of years later, a friend suggested we set up a business in the collaborative consumption space.  Originally we were just car pooling to events however we learned that there were often not enough drivers and pivoted to a more multi-faceted transport model which we use now and incorporates taxi-sharing, and bus-splitting as well.”

So, essentially, all you do is visit their website www.grallo.com, and you will be guided in simple, non-convoluted steps to find a reliable mode of transport back home. Just create an event, invite guests and find your way to journey sharing ease!

It gets better. This year, Grallo had teamed up with almost every major Indan music festival, be it The Great Indian October Fest, NH7 or The goMAD Festival. They have ample experience, having handled IBW, Storm and the Blue Lotus Festival with aplomb. So, adaptation to the unique Indian situation is not a problem.  Tom explains “There is huge variety too, and for us we are fortunate that we are not limited to just one event but can be part of so many.  For example in Bangalore we are working with The Great Indian Octoberfest which is urban live music at its best while the weekend after that we’re off to Ooty to work on The goMAD Festival which has the most extraordinary array of talented musicians.  Our services vary depending on the event, for example for the NH7 Weekender there are over 100 buses plying within the cities, 20 coming from outside, as well as the usual taxi, and car pooling services which are growing in interest.”

And, if you’re worried about the reliability of Grallo’s services, just take a moment to listen to his account of their only majorly negative experience in India - “One poor girl missed a bus on the way back from DJ Tiesto back in March, and we got a call from her father, which was a little bit of a surprise.  Anyway it ended well, one of our reps found her at the event and we put her in a shared cab, she got home safely and her father called to say thanks!”

And that’s not all. They make a concerted effort to make your trip back comfortable. “We do try to ensure the buses are in tune with the event, so we’ll put dance music on for the EDM scene on the way out, something to more chilled so people can decompress on the way back.  We’ve got some cool things sorted for the Mumbai Pune shuttles for NH7 too, but that’s a surprise.“

Conlcusively, Grallo might just be what every festival needed to make the musical evening what it is truly supposed to be about – fun.