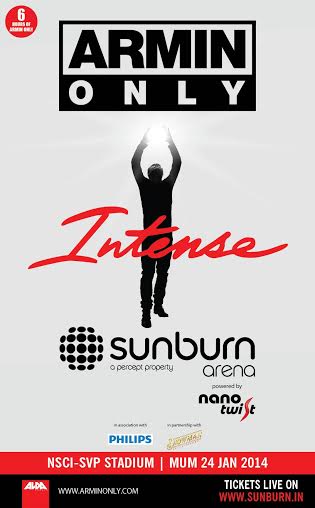 Sunburn is back with their first ever show for the year 2014 – Sunburn Arena – Armin Only ‘Intense’. As the name suggests, this show promises to be intense with a 6-hour solo set by Armin Van Buuren, Live Musicians, Vocalists, Dancers, Performers, Acrobats and many more surprises. Sunburn is also bringing Trevor Guthrie, Richard Bedford, Fiora Cutler and many more artists along with Armin for the show which is scheduled for 24th January 2014 at NSCI-SVP Stadium, Mumbai.

Armin Van Buuren will also be performing at Sunburn Arena Bengaluru  where he will be playing a 2-hour set with an opening act which will be announced soon.

Tickets are LIVE on BookMyShow.