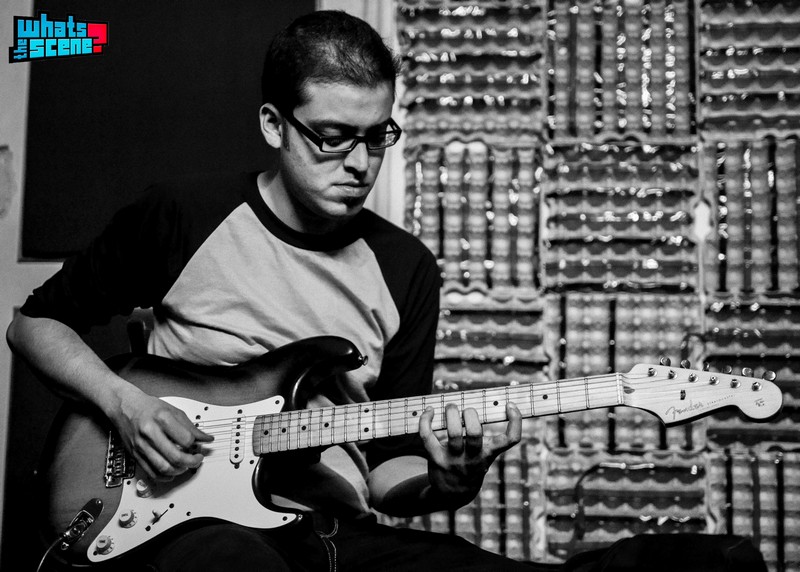 There are very few people in Kolkata who are as skilled in wielding the axe as Bodhisattwa Ghosh. Popularly known as “Bodhi” in the Kolkata music circuit, this expert guitarist is definitely the person to go to if anyone wishes to get a lowdown on guitar gear. We recently got in touch with Bodhi, and asked him to share his views on guitars, gear and music with us.

Speaking about his basic gear, Bodhi introduced us to his guitars and pedal preferences. “I use the Fender 57 Reissue Stratocaster (Limited Edition) and the Fender Highway One Telecaster – both made in the USA. “For effects I use BOSS Single Units, the Fender Bassman Pedal (FBM-1), the Super Overdrive (SD-1), the Blues Driver (BD-2), the Mega Distortion (MD-2), the Chorus Ensemble (CE-5), the Digital Delay (DD-6) and my BOSS GT-10. Regarding synths, I use a Novation Ultranova as my main synth and a Korg X50 as my accessory keyboard. Other gadgets I use are the Boss RC50 Loop Station and as for programming software I use Reason 5, Fruity Loops Pro and Acid Pro.”

But options are always more basic when anyone is a beginner. “I started out with the shittiest equipment possible! Because my parents first thought that music was just a hobby for me, I got a Hobner acoustic guitar and my first electric was a Hobner “Strato” made out of plywood! The selector switches looked like light switches and never worked. I used a Zoom 505 (which in my opinion is the worst processor ever) and I didn’t even have an amp to begin with. I destroyed my Philips Cassette player by plugging my guitar into the headphone jack.”

“During college, I upgraded to a 2nd hand Squier Strat and a Korg 1000G. My mom also bought me an Epiphone Les Paul, but soon I realized I am more of a Fender player. In 2007, I had to get a Fender Strat, because I could feel that the Squier Strat was physically getting in the way of things I wanted to play. So, my father gave me the greatest gift of my life – a limited edition Fender US 57 reissue Strat priced at 1700 US dollars.”

Upgrading, of course, is a continuous process – and with so many new gadgets and models coming out in the market, it is easy to get seduced into buying and upgrading to the latest gadgetry. However Bodhi’s take on this is slightly different and he does not necessarily adhere to the aforementioned principle and neither does he seem to be a follower of the “latest” gear upgrade cycle. “As far as pedals, synths, etc. go, I only upgrade when I have extracted all that I can from the particular gadget and I cannot get the sound I’m looking for. I still have a lot of exploring to do with my Ultranova synth and I will not upgrade it until I find any limitations. I am very happy with my GT10 and all the single units and will not trade them ever. My computer however needs some serious upgrading because I am having the need of more and more synthetic sounds with each passing day. Frankly speaking, I don’t know exactly what is the latest on the scene, but the Roland GR55 guitar synthesizer has really caught my attention. For experimenting guitar players who want to expand the sound of the electric guitar this is a must have. I am planning to get one real soon.”

“I believe that my gear has helped me immensely to shape my sound, but I always believe that the thought comes before the machinery and not the other way around.”

So how does one translate his thoughts and ideas into the music we love to hear? “To be very honest the process is extremely difficult. Whether the idea is playing-oriented or design-oriented, it needs to be tested and reworked upon by continuous trial and error until the thought in my head and the sounds that I hear after the work is one and the same.” So wouldn’t his knowledge of guitars and their associated gear help him in the creation process? “Instruments are extremely important in this regard because one has to clearly understand the direction of sound-scaping which appropriately fits the idea. However, having said that, I must also mention once again that the musician comes first, not the gear. Even if one doesn’t have top-of-the-line equipment, he/she can create great music just by putting apt ideas in the apt spaces.” 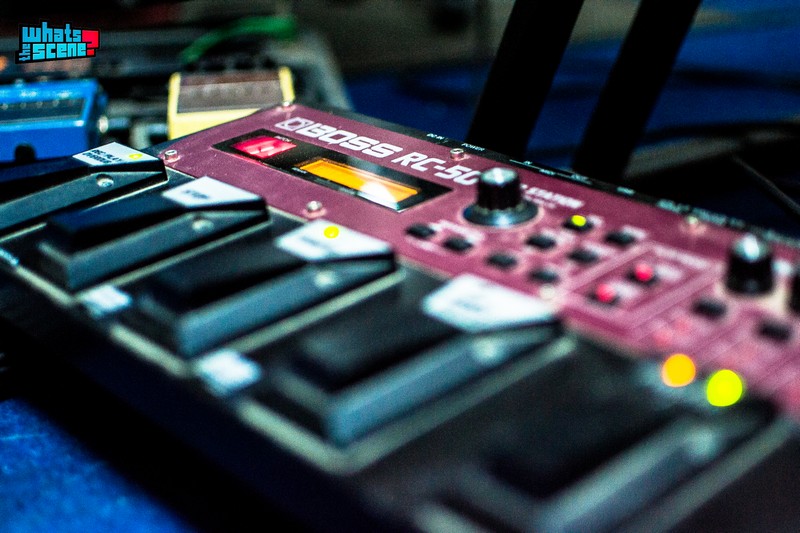 But we were curious to know about the actual process that he generally follows – how, for instance, would he compose a small 30-second track, and what kind of gear would he be using for this? “When it comes to any kind of composing, I always do it on my acoustic guitar and record it on my phone. I listen to the recording again the next day and start working on the appropriate treatment required for that composition.”

Obviously the kind of gear used by Bodhi would depend upon the type of music that was being composed, and being a member of bands that range from the eclectic to the down-right experimental. Take for instance Intersections, the debut album of his pet project The Bodhisattwa Trio, an experimental jazz rock outfit – what was his choice of gear during the composition of this album? “For Intersections, I have used my Strat and my Tele, an OD pedal, a chorus pedal, a delay pedal, a wah wah pedal, plugged straight into a Fender Hot Rod Deluxe tube amp. I have cranked the amp up to get the fattest and beefiest tone. Since the entire album was recorded live all at once, the main objective was to stick to the absolute basics when it comes to the equipment and focus on the playing bit.”

Again, in Atoms and Combinations the second album of indie quartet Zoo, Bodhi’s approach was quite different. “For Atoms and Combinations, I have used every digital device I have, including my programming software. As far as the guitars are concerned I used my Tele, plugged into my GT10, overdubbing the tracks as broad stereo signals, since there were so many layers, FX, sounds and modulations. I prefer to go the digital way rather than handling 20 pedals at once.”

He has even tried his hand at films scores but compared to the type of gears used for his bands, here his approach is a lot less complex. “For film scores, since it is impractical to carry my amp to every studio, I simply use my GT10 and record my guitar as a stereo signal.”

Bodhi is quick enough to provide us with a few useful tips which should be reassuring to guitar players of all categories. “For beginners, I strongly recommend a good, comfortable but not too fancy acoustic guitar. I started out with a Hobner acoustic guitar which was not very good but these days, you get very decent Chinese, Korean and Indonesian made acoustic guitars at very reasonable prices. Starting out with an electric guitar is absolutely disastrous because it completely shuts out all the options on your style of playing. At the intermediate stage, one must decide upon the style of music he/she wants to pursue and accordingly take a call. If you want to purchase an electric guitar then I recommend spending some money to buy a fine instrument as it will be a one-time investment and the instrument will become an extension of yourself eventually. Same applies for acoustic guitars. For advanced guitar players, the world is an ocean of choices. He/she will know exactly what is needed and it is only a question of application.” 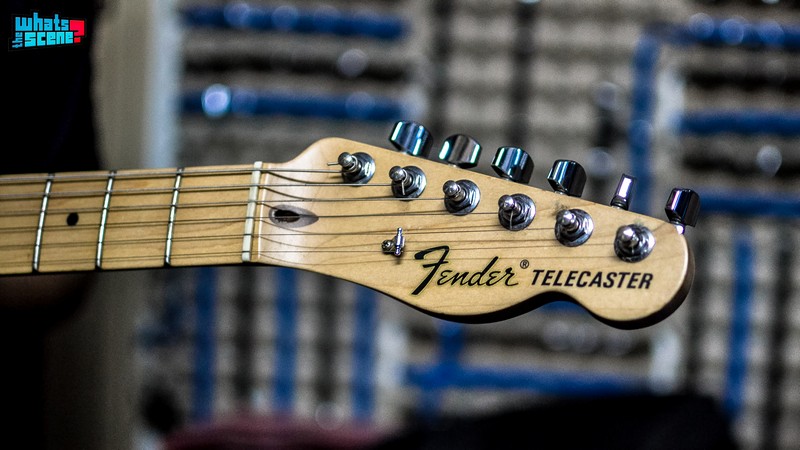 As a parting word to all guitar enthusiasts in and around the city who not only avidly follow him but look up to him as a role model, Bodhi says “The player comes first, not the instrument. I always put special emphasis on tone extraction with the pick and fingers rather than using heavy duty instruments. A good player will always get a good tone even if he uses the shittiest gear. But of course, a good instrument will always bring out the best in you. In a nutshell, the story lies inside your body and mind. Practice and hard work is everything.”