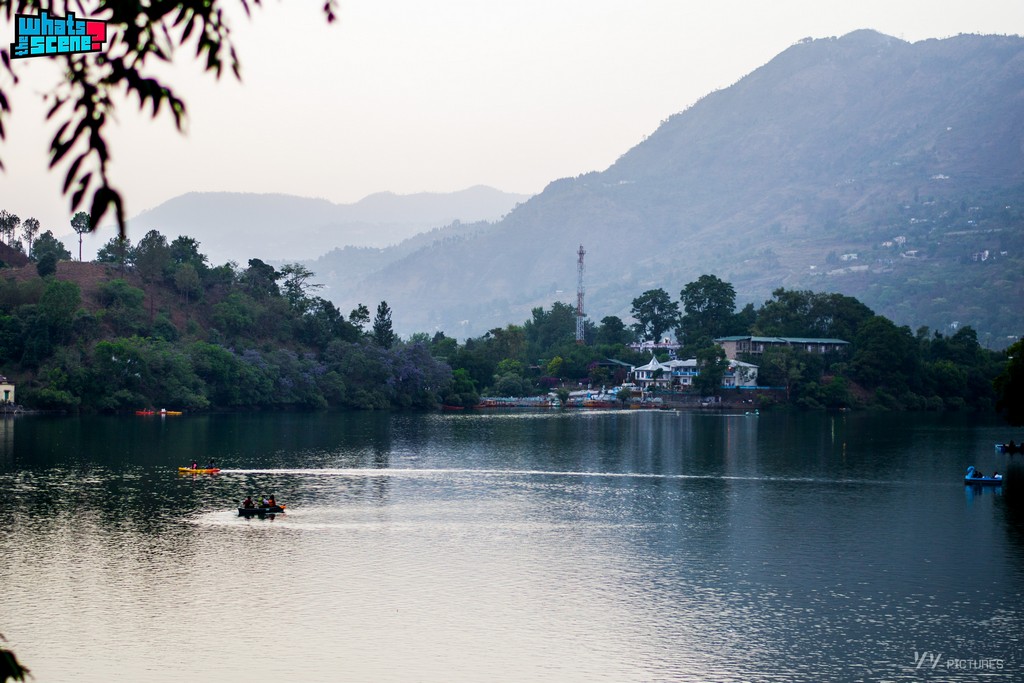 My first attempt to cover a music festival made me feel like William Miller from the movie Almost Famous, though I realized soon that the comparison was too glorified. This wasn’t going to be a window into the dark secrets of the bands but just a platform that would put forward an experience at Escape. I had been to the Escape Festival two years ago and I remember the experience fondly. It was the perfect ambience, well organized and the music was selectively good. I was looking forward to going back to rediscover what it feels to be in the arms of music for three whole days. 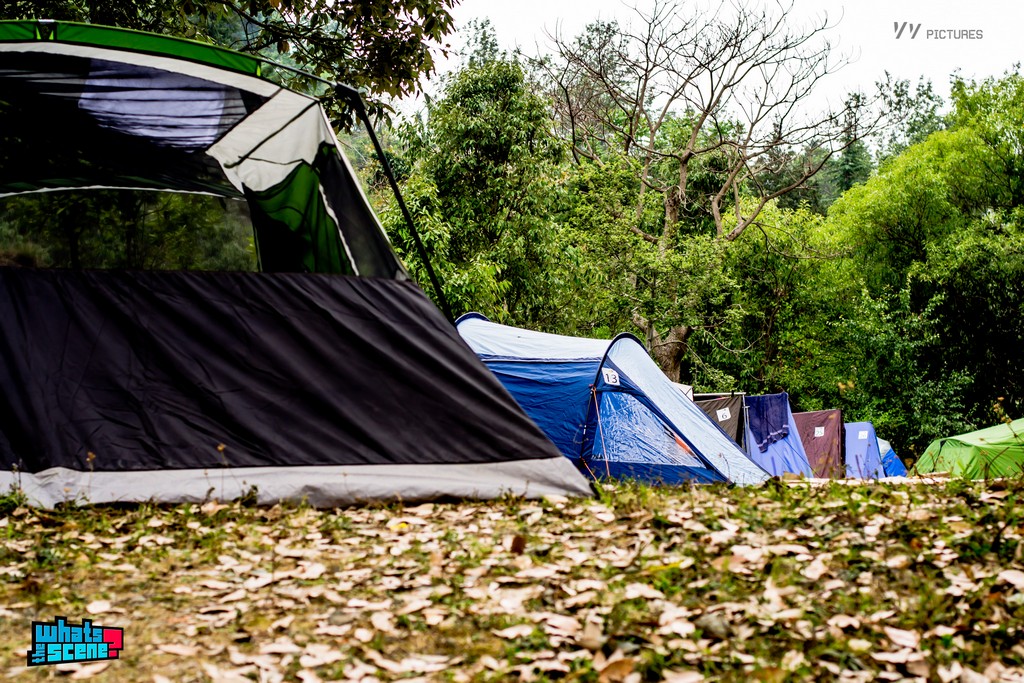 Like all events, this one was no exception with regard to the lack of organization. It probably went a step ahead. The venue did greet us with a spectacular scenic vision and a remarkable stage but almost everyone complained of waiting endlessly for a room – even the artists. We were tired, hungry and without a roof for hours and it was only after several outbursts from artists, visitors and media alike that things seemed to be sorted. Almost everyone complained about the lack of organization and vacant stares from the people responsible. But when the music started, everyone just shut up.

Let me throw some light on what the festival was about – there were over 17 bands performing amidst a brilliant sound and stage, aptly named Soul Garden,  there were film screenings, artists displaying their work and a second elaborate stage called the Magic Forest  for electronic music and an impressive list of artists. 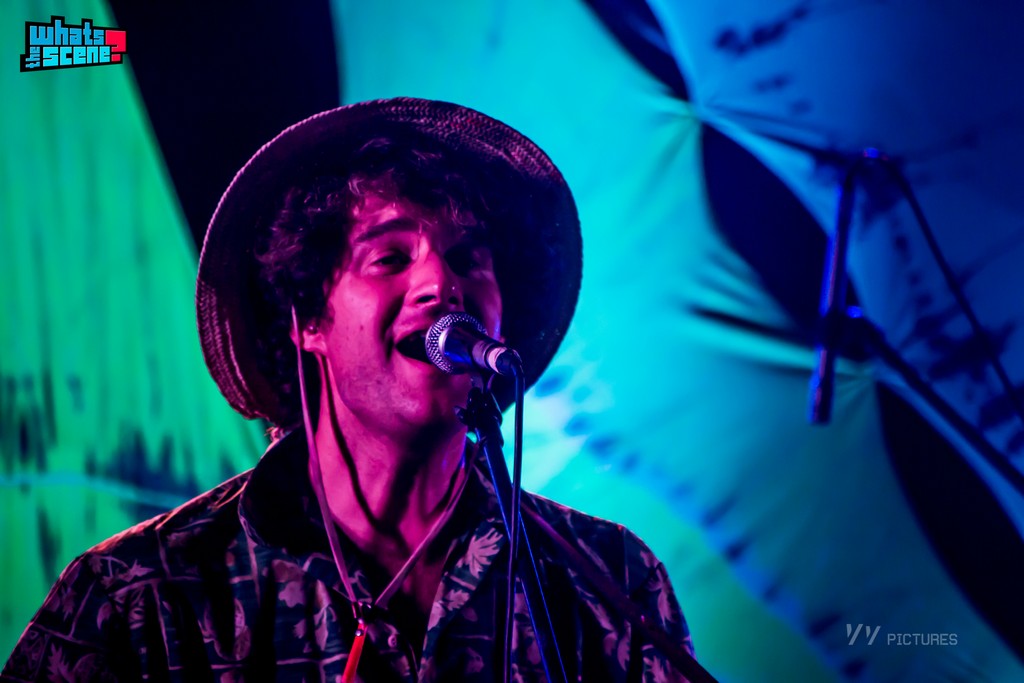 The evening of the 24th started with Delhi Roots (apparently with no one from Delhi in it), whose genre is defined as Latin Reggae. A last minute addition to the list of performers, I particularly enjoyed Sergio, the bassist’s performance. It was the first appearance of Shirish Malhotra on the Saxophone (and then on the flute), in the festival. Vocalist/Guitarist Antone was a huge support to Sergio not just with music but also stage presence.  For me, the band didn’t do much musically, though they did lift up the crowd’s spirit. 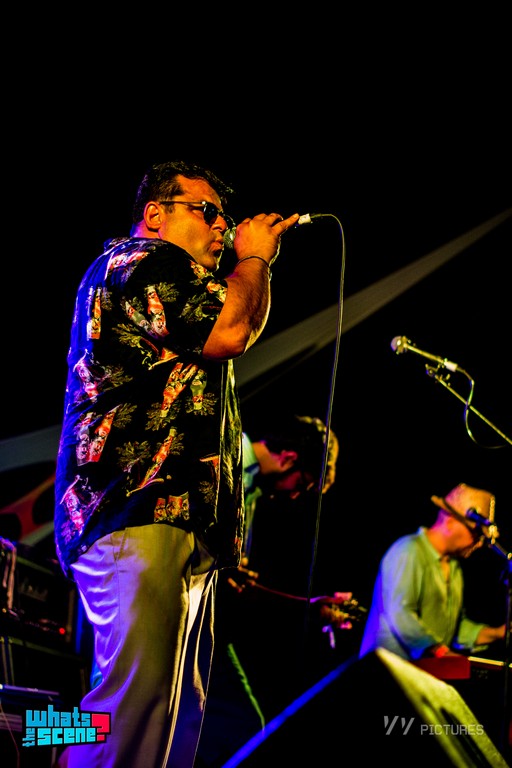 Next up was Atul Ahuja with a host of accompanists. The accompanists included Shirish Malhotra (Saxophone), Anirban Ghosh (Bass), Nikhil Vasudevan (Drums) and Stefan Kaye (Keyboards), who apart from a few unintended mistakes made Atul look good. This was the perhaps the only act to do all covers on stage, and popular ones at that. Stefan’s stage antics amused the crowd and the artists alike. 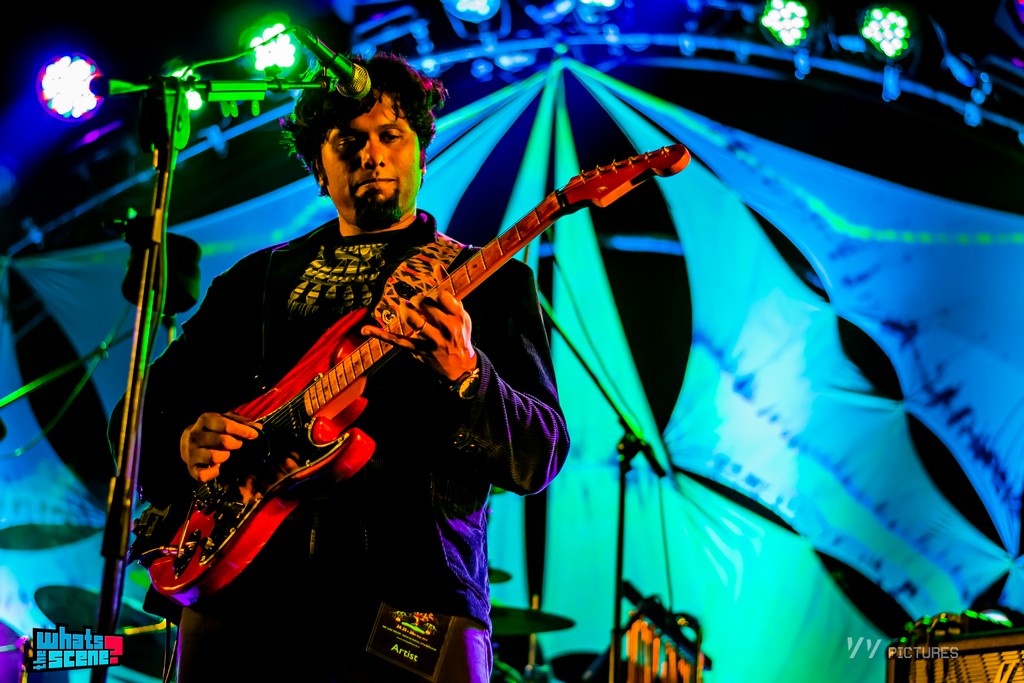 And then the band that I had been waiting for came and stole the show! Thermal and a Quarter kept the crowd going with their popular songs and did some songs from their new album. Bruce was and is a treat to watch. The relatively quiet duo- Rajeev Rajagopal (Drums) and Leslie Charles (Bass and backing vocals) – helped the band belt out some of the best songs of the evening. Not only is their legacy of over 15 years as a band commendable but the fact that they dish out something new also is. 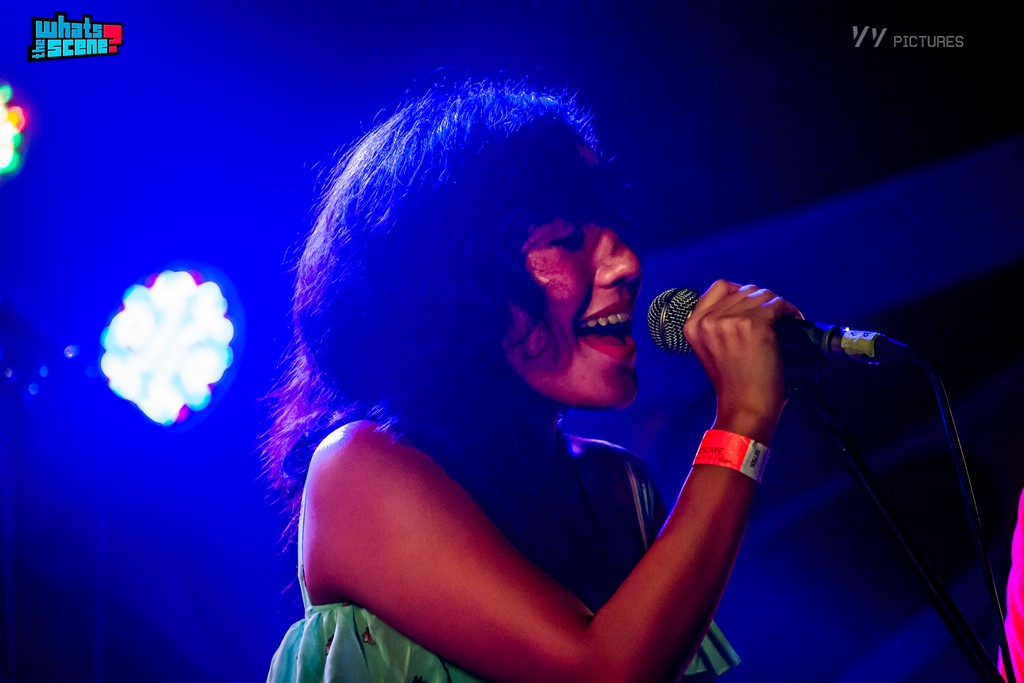 The evening ended with Faridkot who started on an impressive note with great sound but ended as a band that sounded monotonous. The band that calls itself “confused pop” had an eclectic mix of blues, soulful harmonies, slick guitar riffs and powerful vocals, but unfortunately after a point it sounded like they were playing the same songs. I did enjoy the harmonic melodies of IP Singh and Sonam though! The first day was hectic and it had nothing to do with the stage acts, just the management, but I was glad it ended well. 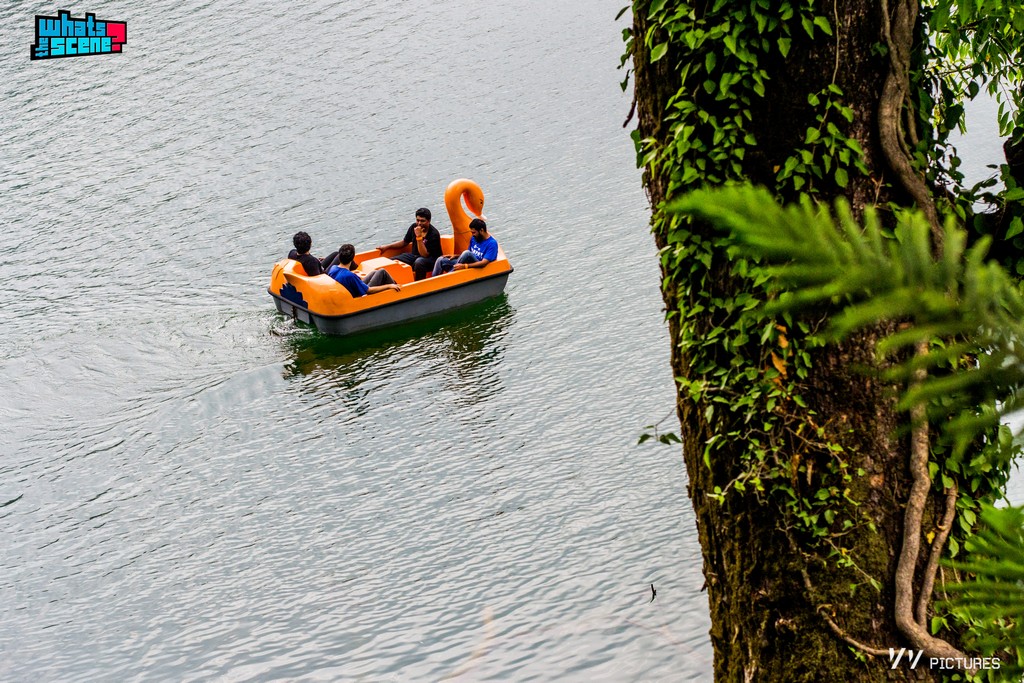 From the looks of it, the second day had a lot to offer at Escape. Against the backdrop of the peaceful lake, where I could find people jumping in and boating, there were movie screenings. No one seemed to have a clue about them and I found a lot of people coming up to me and asking the clichéd question “So, What’s The Scene?”  It was unfortunate that people missed out on the movies and music only out of lack of information passed on to them. I am not a huge fan of electronic music but I was pleasantly surprised by the music served at the Magic Forest because I expected straight up electronic, but it was experimental. 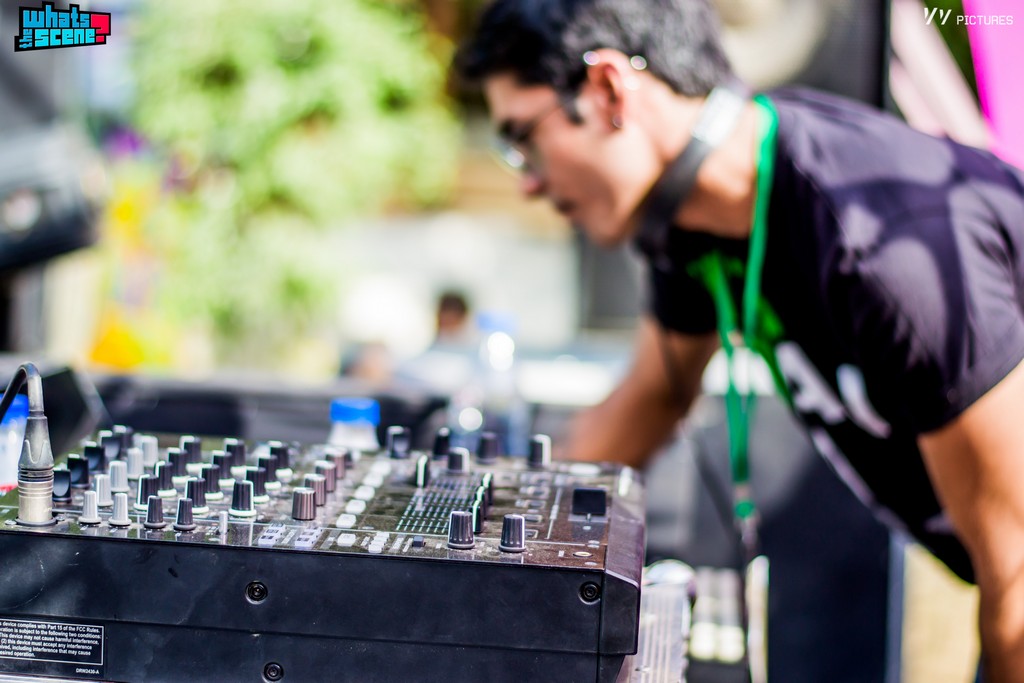 Fuzz Culture stood out but I think that had more to do with my preference than strictly about electronic music. The act consists of  Arsh Sharma (guitarist/vocalist of The  Circus)  and Sri Mahajan (Drummer Parikrama). People were looking forward to Vachan Chinnappa and Waga Waga (Aeroplane Records, UK) but a brutal stop was put by the cops during Vachan’s act. So the acts that did perform were Frame/Frame, Loopbaba. Fuzz Culture, Tarqeeb, Ez Riser and Buffa Pirate (who performed the next day morning to no audience instead of their scheduled Saturday night performance). 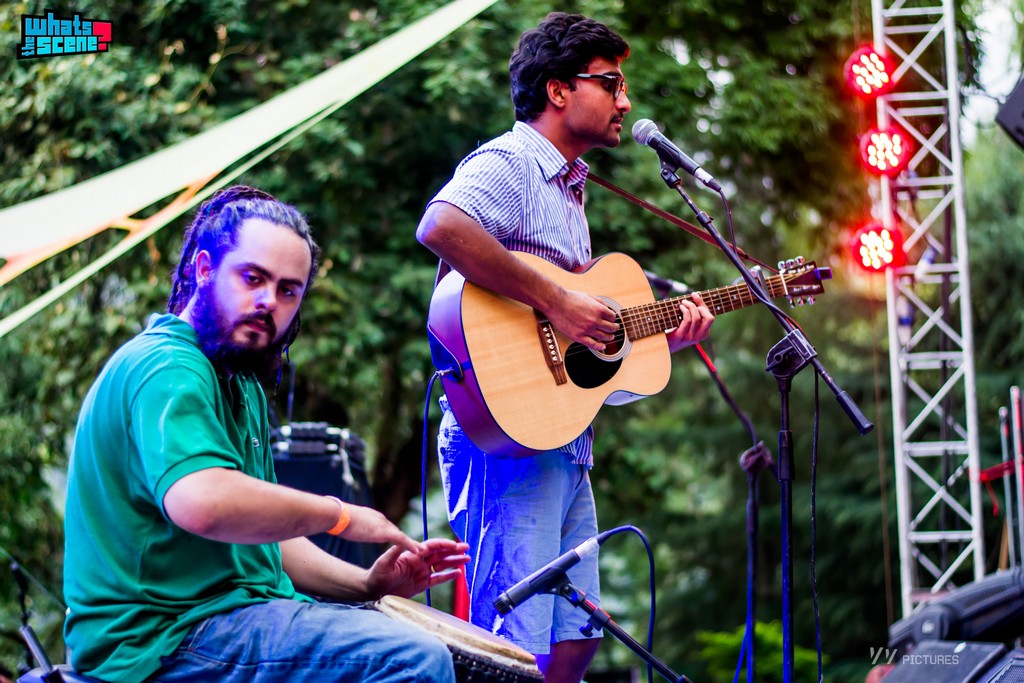 Soul Garden started with what was called the “Square Root Sessions”, which featured upcoming bands. Out of the three bands which performed, Pilgrim Tree House, Prateek Kuhad Collective and Gravy Train, Prateek was my pick. The evening sun was about to set so the acoustic works of Pilgrim Tree House and strums of Prateek’s guitar were a perfect mood setter. Just when I thought the strumming of Prateek’s guitar was becoming monotonous, Vir Singh Brar’s Jambi (a musical instrument that I hadn’t heard before) set the music apart. I didn’t quite enjoy the Hindi compositions for the mere fact that they didn’t offer anything new. 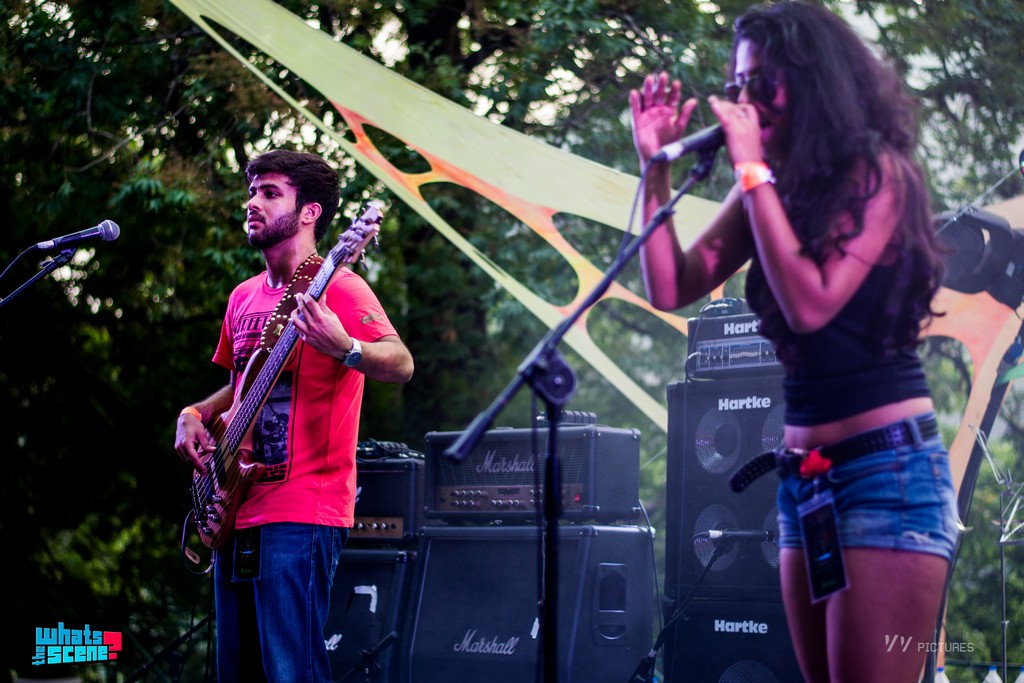 While I understand the popularity of Gravy Train coming from their act and interactions on stage, I would hope they concentrate on music as much. Akshay Johar’s bass stood out for me in the band. Gravy Train features Tanya Nambiar (Vocals), Akshay Johar (Bass), Karan Malhotra (Guitar) and Bhairav Gupta (Drums). 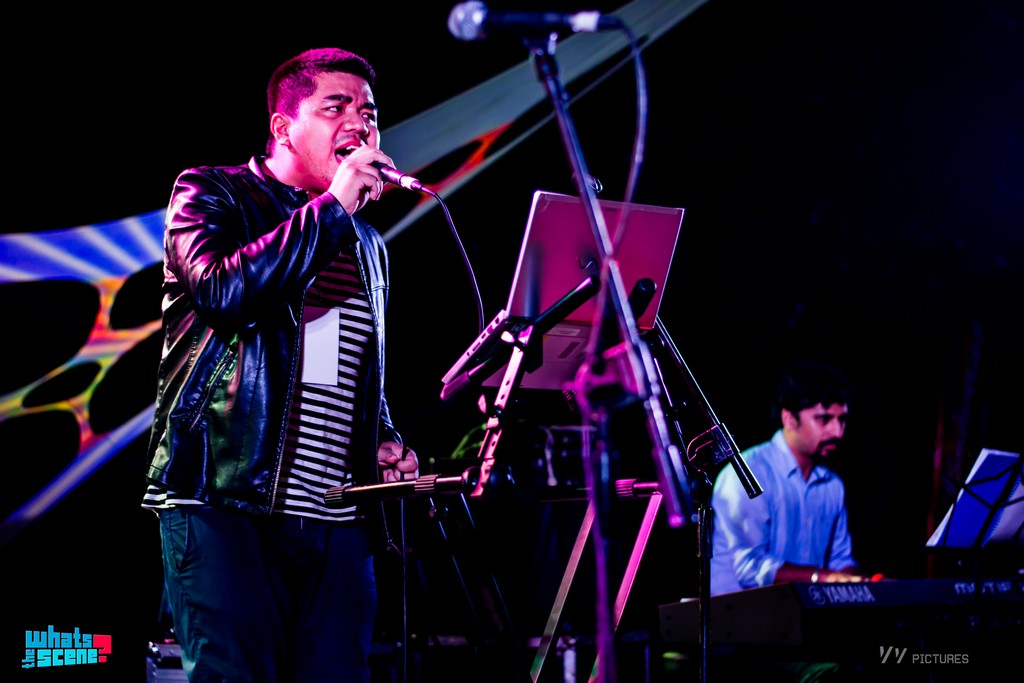 The amateurs set the mood and now it was the turn of the popular bands to carry the shiny beacon which pretty much flickered till the end. Sanchal Malhar of Indigo Children fame and Toshar Singh Nongbet of India’s Got Talent fame kept the crowd going. It was good to see the crowd enjoying Toshar’s opera style! 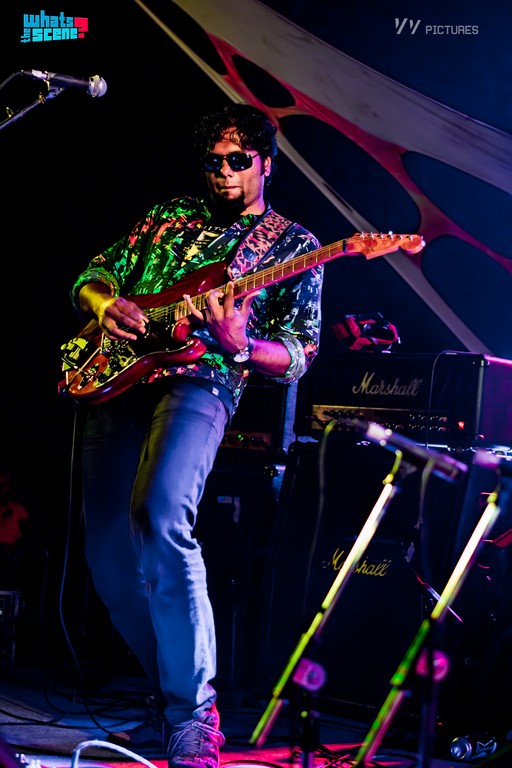 Bertie Da Silva and Amyt Datta were the opening act to Skinny Alley’s tribute. They had the fellow musicians up in applause and the crowd enjoying every moment of their performance.  The evening belonged to Skinny Alley who paid a tribute to the great Gyan Singh. More than a performance that has to be subjected to scrutiny as a musician, it was an emotional drive. It was good to see Bruce (from Thermal and a Quarter) joining in the tribute that lasted for quite some time and kept the crowd going. Jayshree’s vocals didn’t seem to fade till the last song and the applause from other musicians was endearing. More than musically enriching the second day for me was an emotional roller coaster (of the good kind). 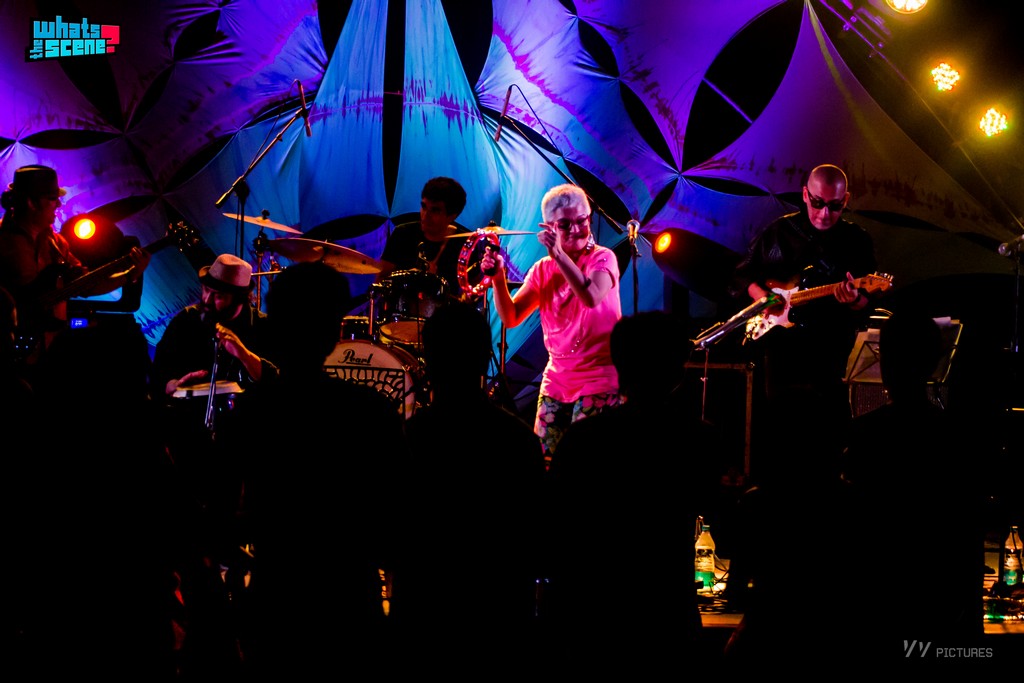 And then came the third day and I was reminded why I had come to Escape and stuck around the chaos. The Magic Forest offered a treat to the interested souls as the artists played well into the wee hours of the morning. The featured acts were Shantam, Vial, Dirty Saffi (who unfortunately did not play), KT, Tadayan, White Wizzard, Arjuna, Al Psummetrix, Technical Hitch and Post Modern Pundit. From the description and the buzz created, I wanted to listen to Post Modern Pundit and Dirty Saffi, but I was hooked on to Blackstratblues who were playing around the same time. Amongst the bands performing in the Square Root Sessions, The Cham Chams didn’t perform. No Thoroughfare and Raunak Maiti started the evening and Run! It’s the kid set the pace. 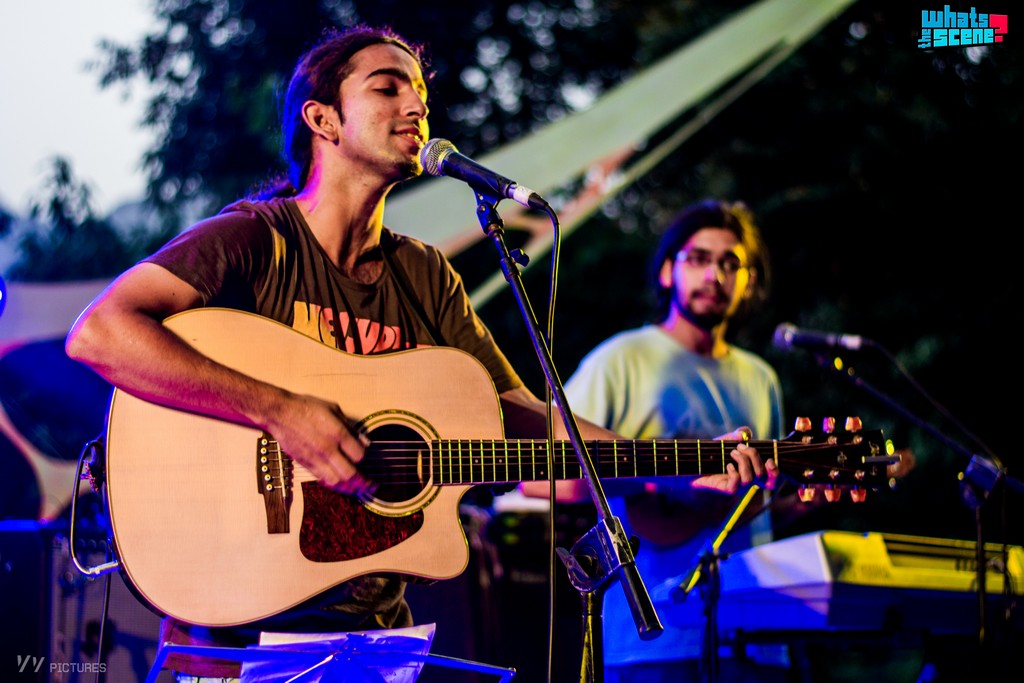 Unfortunately, I missed No Thoroughfare’s performance as I was drawn to watching a movie (which was brilliant). Raunak Maiti had Prateek Kuhad joining him for a few songs as all his songs were acoustic compositions. I did not enjoy his compositions on the keyboard as they sounded incomplete. It seemed the two artists from Mumbai had quite a support though in the audience. Dhruv Bhola (Backing Vocals/Guitar) and Shantanu Pandit (Vocals) from Run! It’s the kid helped gradually shift the music from acoustic to Folk/Reggae sounds. The Ukulele added the much needed zest. Most of the bands featured in the early part of the two days were acoustic or Reggae. 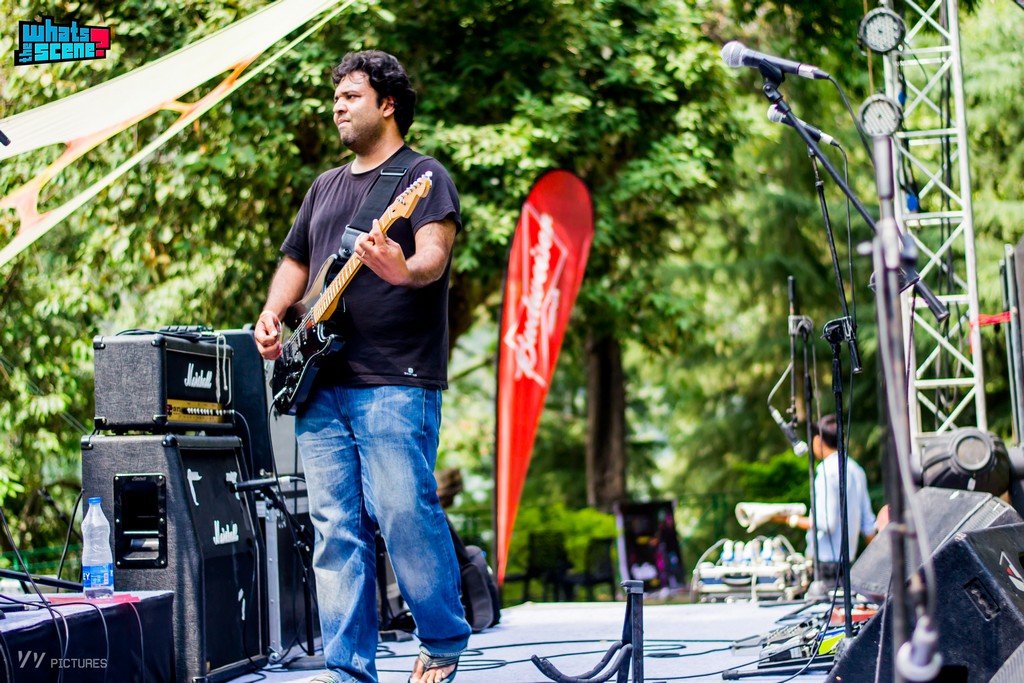 Beneath the star studded sky, breezy intoxicated air and the tremendous sound and stage, Blackstratblues began to mesmerize. Warren Mendonsa wielded his weapon and dedicated songs to the sunny evening, the rainy days and Zeppelin (his dog). Jai Row Kavi (Drums) joined Warren and made the shift to blues pretty effortlessly. This was one of the moments when I was reminded why this festival was worth coming to! 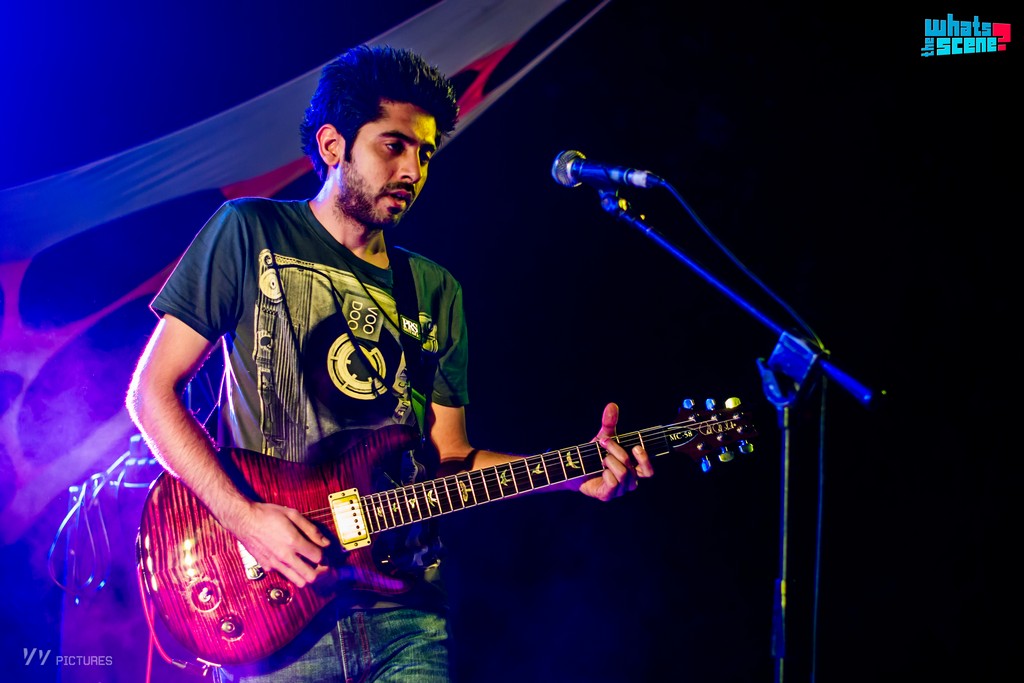 Tough on Tobacco was again high on reggae and quite predictably, Sidd kept the crowd going. A band that starts to describe itself “as a 6-piece progressive disco dance metal bhojpuri act from Outer Mongolia” is indeed a humor tinged pop-reggae band. I was particularly intrigued by the photo of the band on the schedule brochure and their music seemed to explain it! The band features Sidd Coutto (vocals/guitar), Gaurav Gupta (guitar/vocals), Pozy Dhar (guitar), Neil Gomes (violin/sax/flute/vocals) , Johan Pais (bass) and Jai Row Kavi (drums/vocals). 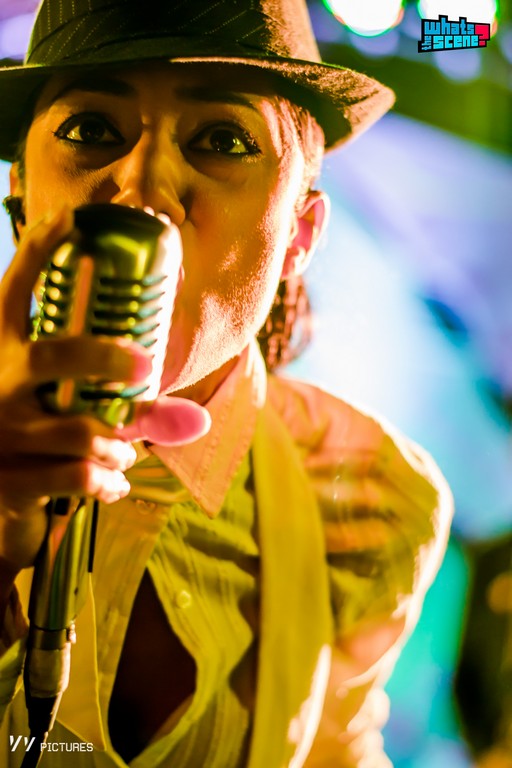 The evening ended with Ska Vengers, another act that was sought after in the fest. The eight-piece band made the crowd stand up and dance to their tunes. Vir Singh Brar got on the stage to join them, this time acknowledging the band by dancing. It was the first time I was listening to them and they came across as a modern twist (the twist being interspersing various genres of music) to Jamaican music. Shirish played with the first band in the 3-day festival and then played with the last as well. There isn’t any musical significance to this but it sure is a fun fact! The lineup includes Samara C. (vocals), Delhi Sultanate (vocals), Stefan Kaye (organ/percussion), Raghav Dang (guitar), Tony Guinard (bass), Nikhil Vasudevan (drums), Rie Ona (alto saxophone) and Shirish Malhotra (tenor saxophone). The electronica stage was thumping simultaneously, which made me feel torn between the two stages. However people who were clear about their agenda must have enjoyed to the fullest! 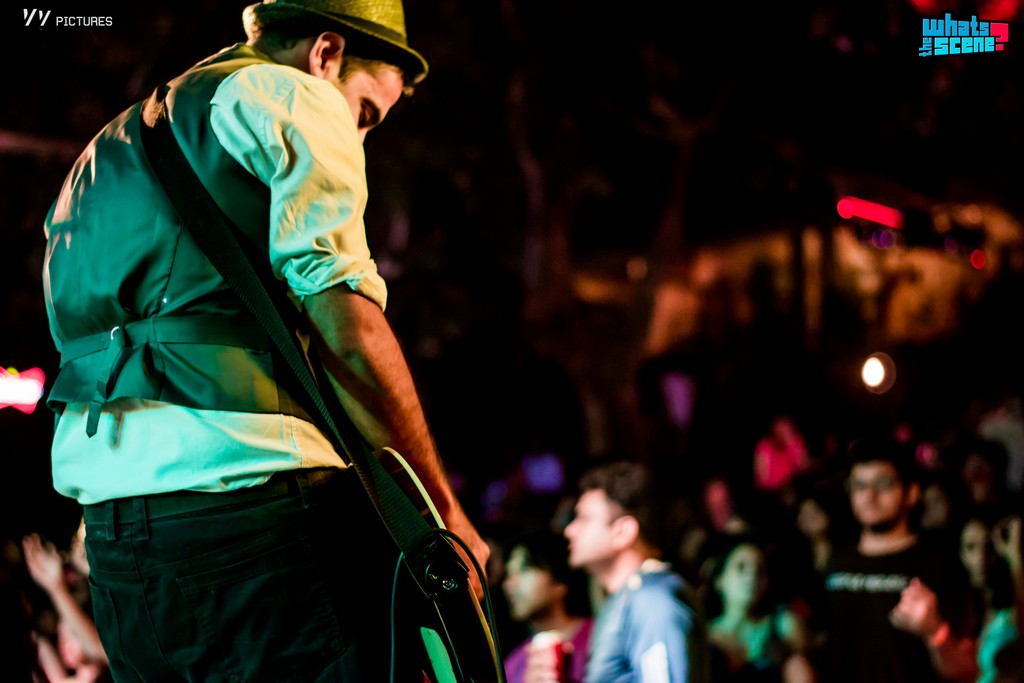 My first impression of Escape (from two years ago) was that everyone finds his space – a space that is personal and oblivious to fun as defined by others. This time I found an invasion of my space mostly by the mismanagement and lack of information. Escape for me was never about getting high on anything other than music and the ambience, and I found myself meeting people who thought otherwise. But the effort of bringing so many creative minds under one roof is indeed commendable; if only the fest had been managed well, it would have left a lasting impression on my mind.