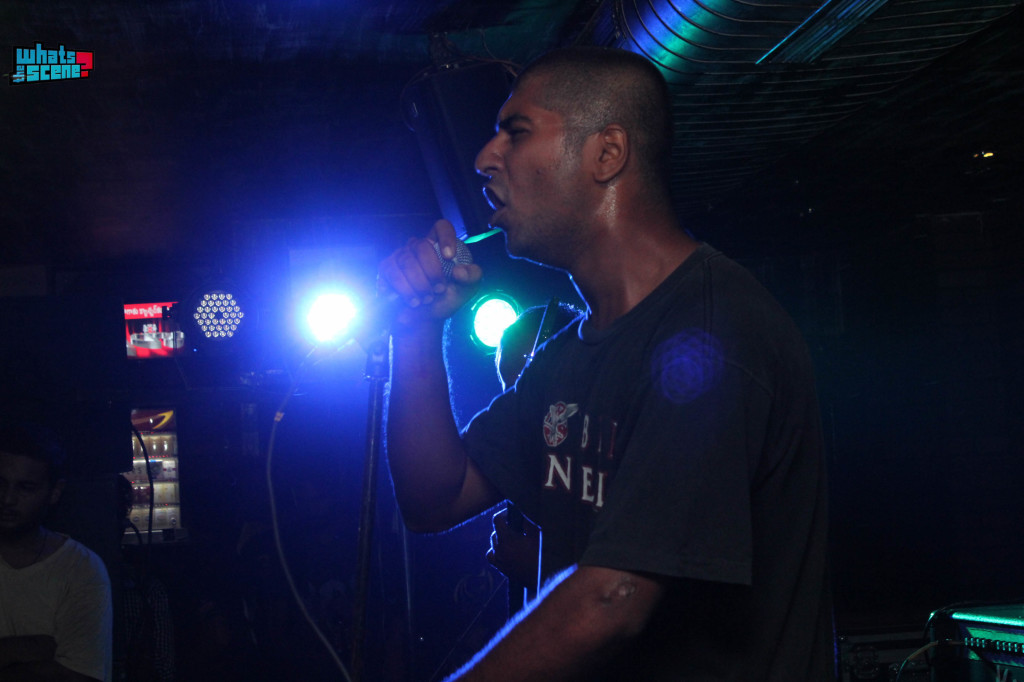 For all the headbangers in Hyderabad, Metal Wave at Xtreme Sports Bar brought an evening of metal music which made for a perfect Saturday on the 19th of May 2012. Xtreme Sports Bar along with MetamorphiK and Tooth & Nail Productions had the stage set for metal bands from Hyderabad and this time around, there were new bands formed by the coming together of seasoned musicians sharing the platform with one of Hyderabad’s most popular bands and the headliners for the event – Skrypt. 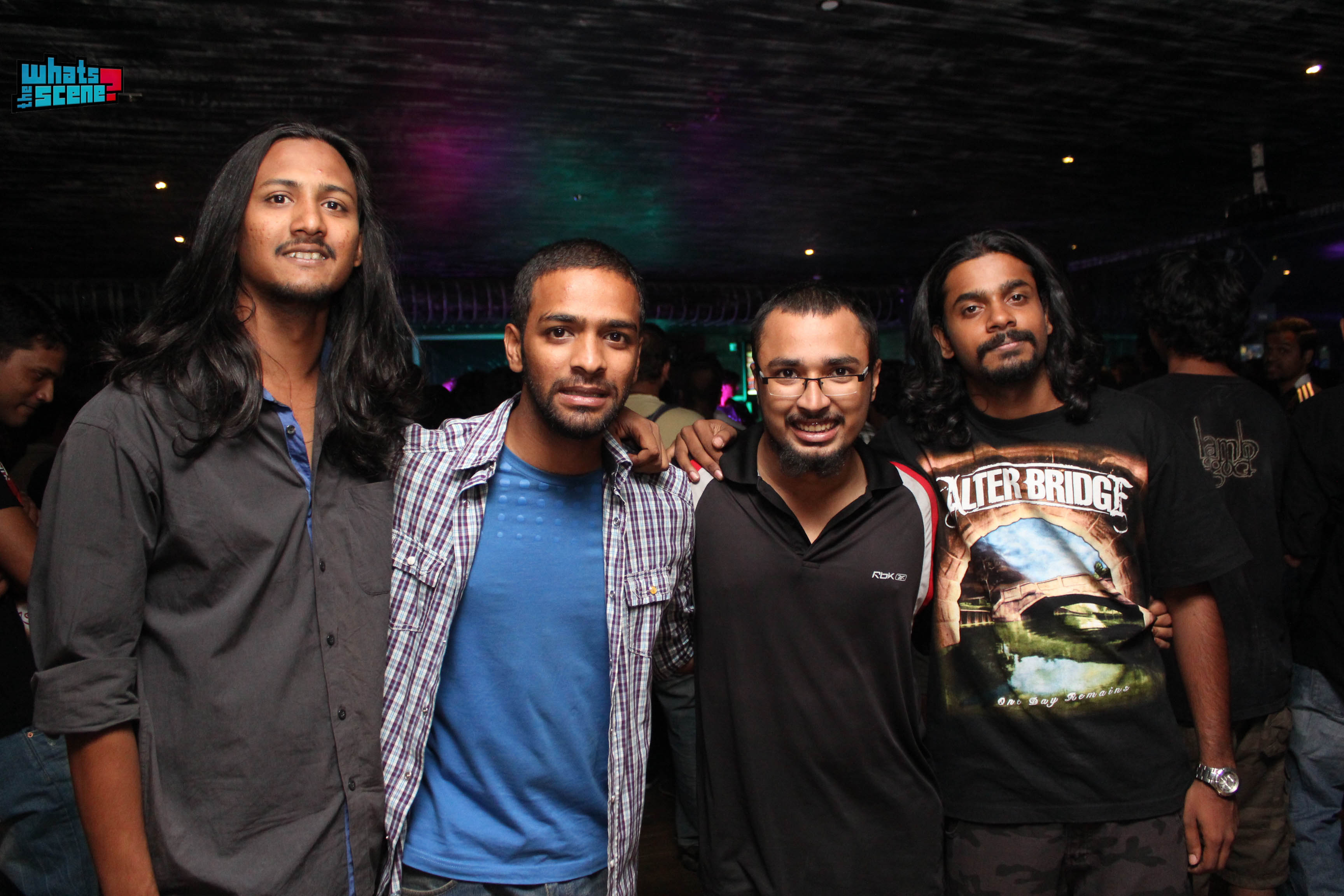 Four Clover, a group of experienced musicians, who have played for accomplished bands like Sacred Groove and REALMS, came together with the objective to show that music is something that each and every individual can relate to. With progressive influences from bands like Pagan’s Mind, Pain Of Salvation and Hard Rock influences from bands like Blackstone Cherry and Alter Bridge, Four Clover kicked started the show with the groovy ‘Cochise’ by Audioslave. With Vocals by Ashok, Eddie on the guitars, Praveen on the bass and Rohit on the drums their music has progressive and hard rock elements along with some groovy tones. ‘Linoleum’ by Pain Of Salvation followed next and Ashok got the crowd into the groove. Four Clover gave its own touch to Alter Bridge’s ‘Before Tomorrow Comes’ with a bass intro. The entire band pulled the crowd in with Foo Fighters’ ‘My Hero’. The final was their first composition – ‘Dawn of Day’. The clean vocals, classic guitar tones, crazy bass and drums, and the fact that it was Four Clover’s first major gig made it just the right start for the evening. 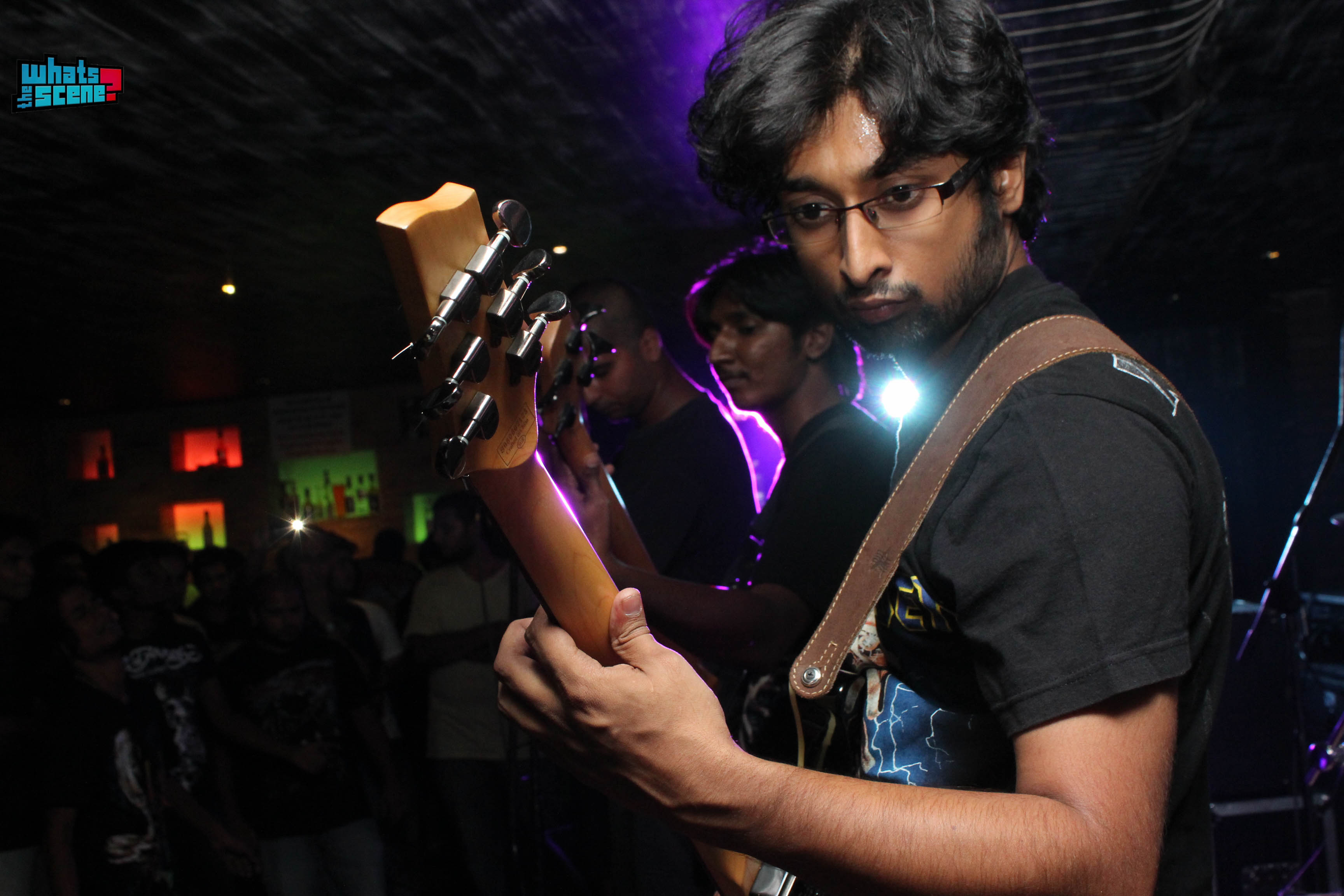 Perpetual Void formed in February 2012 is a 5-piece thrash death metal band, the line-up of which includes Swaroop (Ex-Cerebral Assassins) on the drums, Roshan (Ex-Cerebral Assassins) and Chaitanya on the guitars, Kenneth on the bass and vocals by Pranav. They opened with ‘F**king Hostile’ originally by Pantera, which is one of the favourite bands of most heads. The rest of the set list included their original ‘Ministry of Death’, Opeth’s ‘Leper Affinity’, Lamb of God’s ‘Walk with Me in Hell’ and concluded with another original ‘Apostasy’. Their compositions were good with heavy riffs and lot of double bass drumming, and growls that reminded me of Underoath. 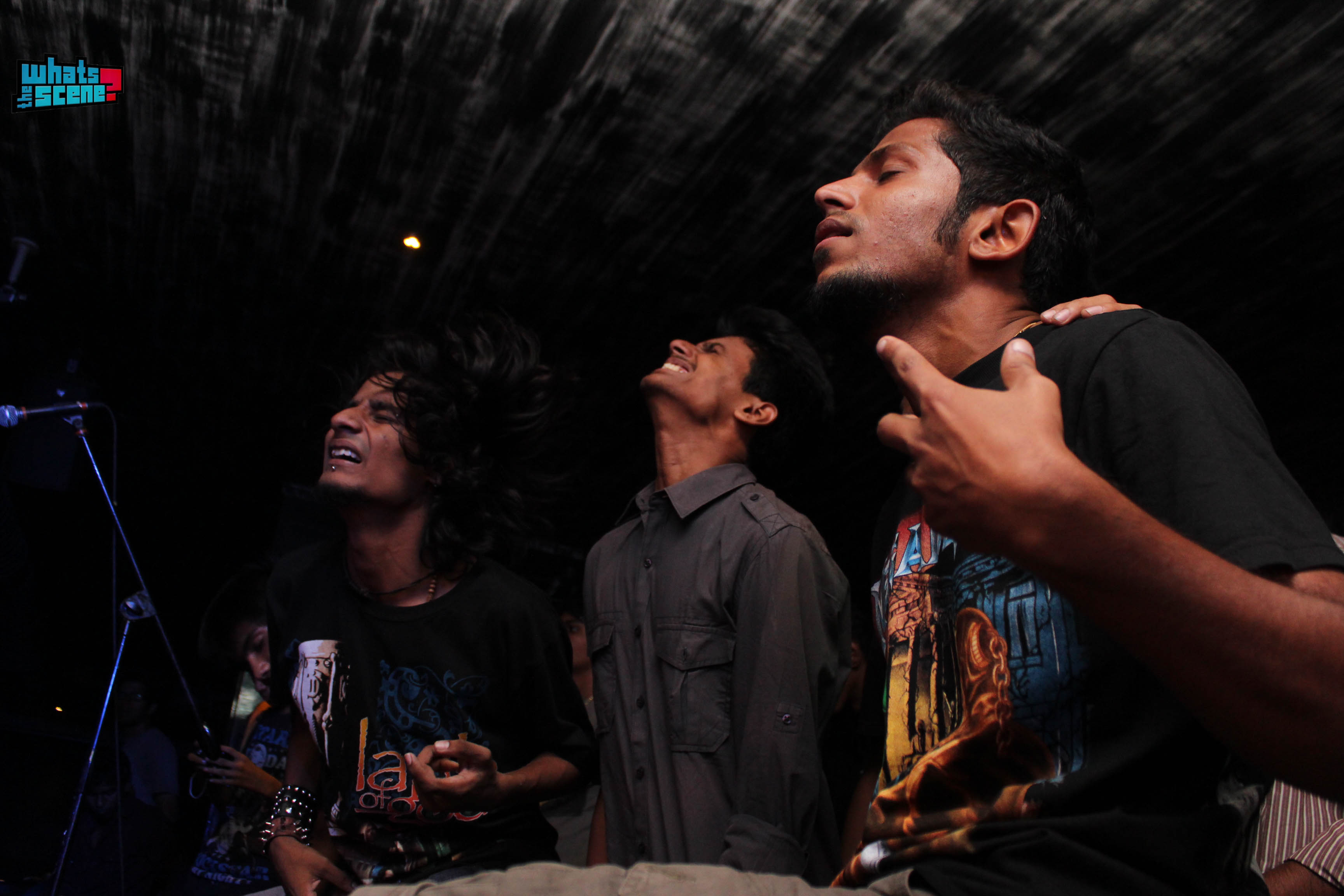 For all the fans of Shock Therapy, Insidious might turn out to be their next favourite since the band was formed by Jay (Shock Therapy), Aniketh (Shock Therapy) and Sumeet (MetamorphiK Productions). With vocals by Rahul(Shock Therapy), Jay and Santhosh (Cadent Slaves)on guitars, Sumeet on bass, and Aniketh on the drums these guys are influenced by bands like Slayer, Testament, Death, Motorhead, Judas Priest, Morbid Angel and Kataklysm. This was Insidious’ debut gig and they played a rather short set with Motorhead’s ‘The Game’, Slayer’s ‘Seasons in the Abyss’ and Kataklysm’s ‘Blood in Heaven’. With unusually deep growls, and influences ranging from heavy metal to death metal, their musical style is a mix of various subgenres. 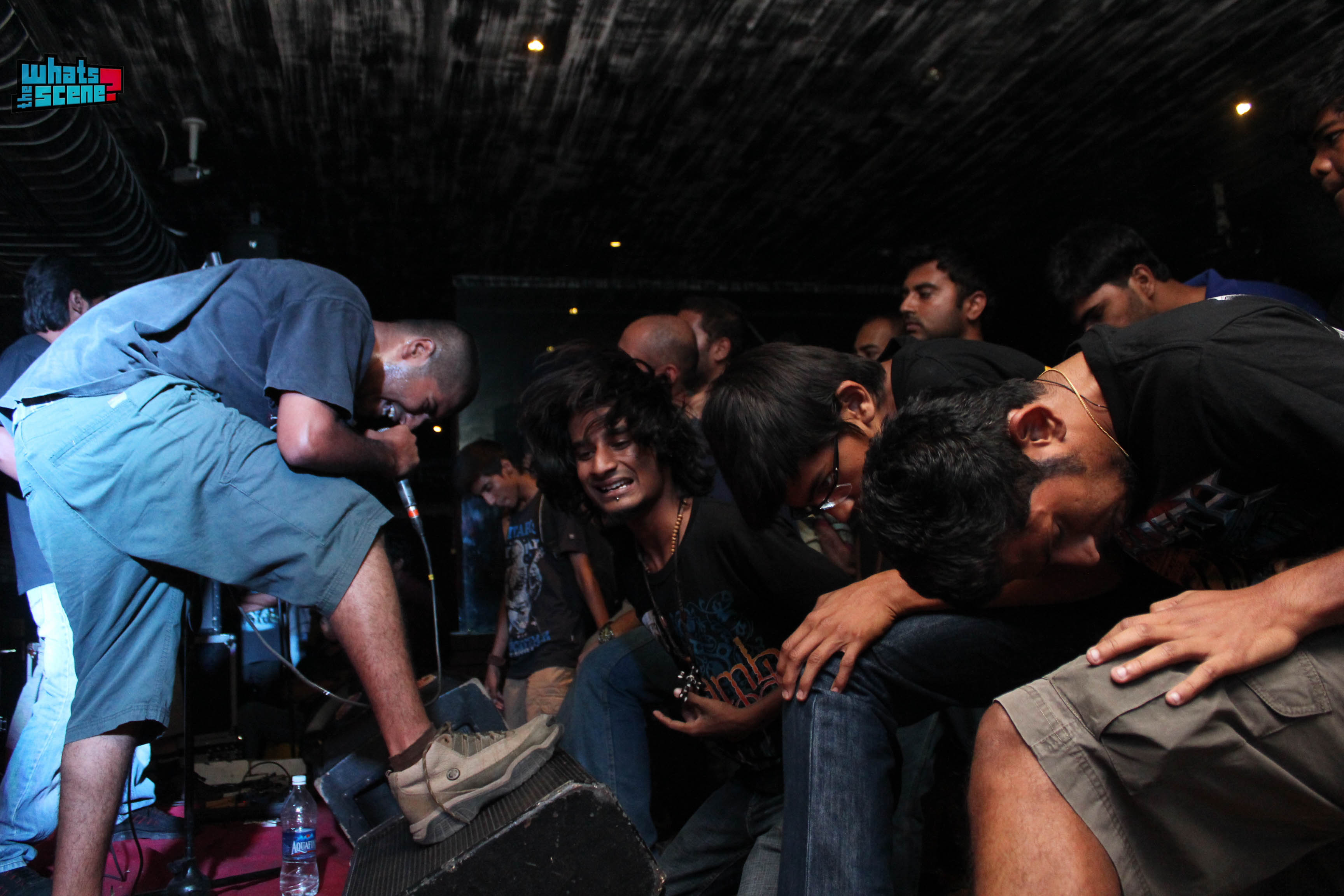 This gig was the first of its kind for Skrypt especially because this time the lineup featured a few guests. Due to an unfortunate accident in which he fractured his forearms, the current lead guitarist, Joel, was unable to play. However, the show did go on with ex-guitarist of the band Ramya back on the lead. The rest of the lineup had Scenic on vocals, Ravi on the guitars, Abbas on the bass, and Rajiv on the drums, coupled with Alan (Pandora’s Box) as a guest guitarist and Ananth (Ex-Negator) as a guest vocalist.

‘Artifice’ from their EP Discord was their opening piece that was followed by other originals like ‘Constructing the Absolute’, ‘Anathema’ and ‘Supremacy’ also from their EP Discord. Their compositions are mostly thrash metal with elements of progressive and death metal. Their covers included Gojira’s ‘Clone’, Pantera’s ‘Mouth for War’, Slayer’s ‘Raining Blood’ and, on popular demand, Pantera’s ‘Cowboys from Hell’. While playing ‘Clone’, the band pulled up a guy onto the stage to headbang with them, who later dived back into the crowd. For ‘Mouth of War’, Alan played the guitars and for ‘Raining Blood’ and ‘Cowboys from Hell’, the vocals were handled by both Scenic and Ananth. As always, this was yet another entertaining performance by Skrypt. 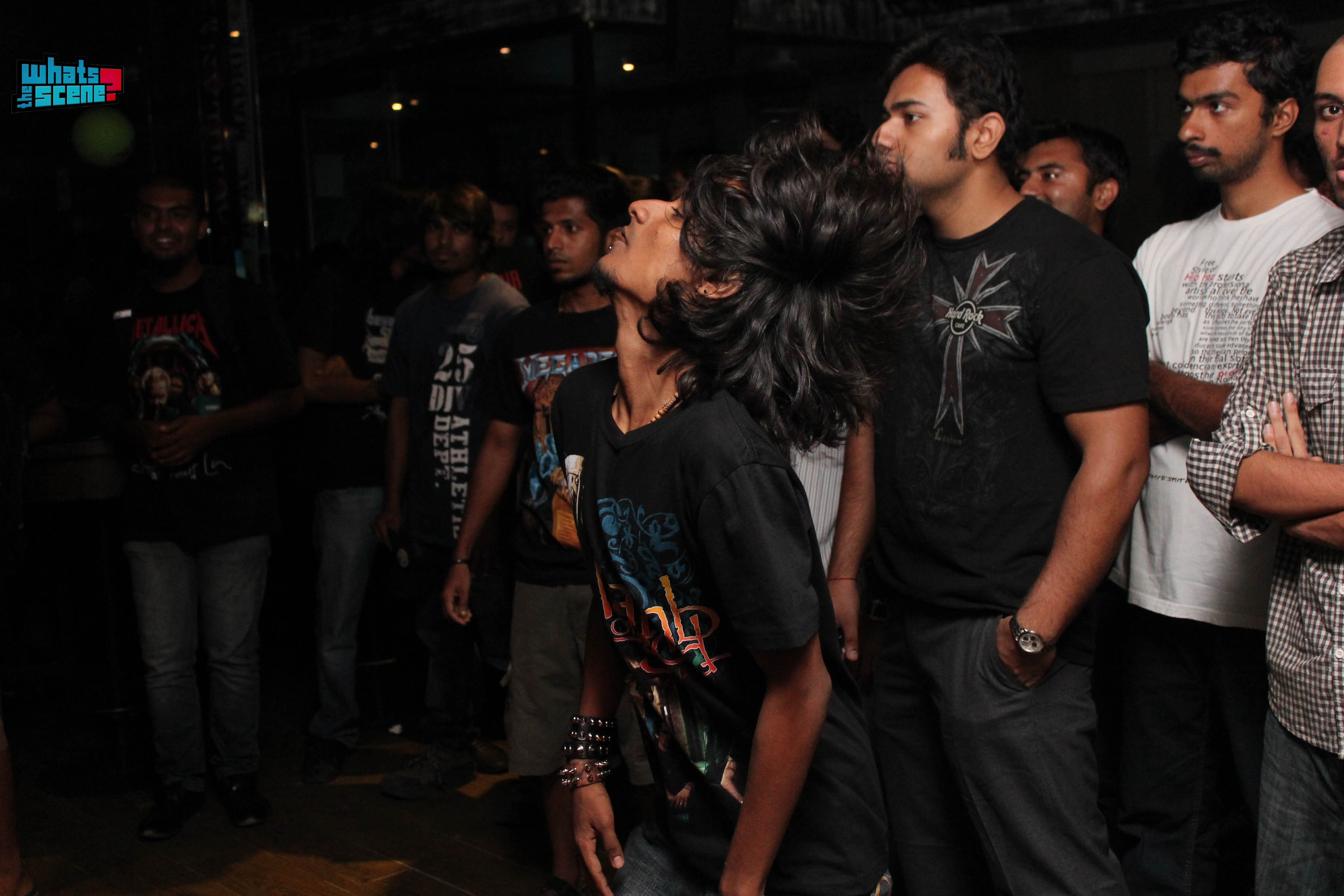 There were quite a few glitches with the sound especially when Insidious played and a few slips here and there with the other bands. However, that did not stop people from enjoying the concert. The crowd went wild head banging, moshing, and diving from the stage into the crowd. All the four bands kept the enthusiasm of the crowd on a high throughout the concert.

Four Clover’s groovy musical style attracted the crowd, moving on to heavier music by Perpetual Void and Insidious and on to Skrypt – the perfect transition for an evening of metal leaving everyone with high spirits and a stiff neck caused by some extreme head banging!