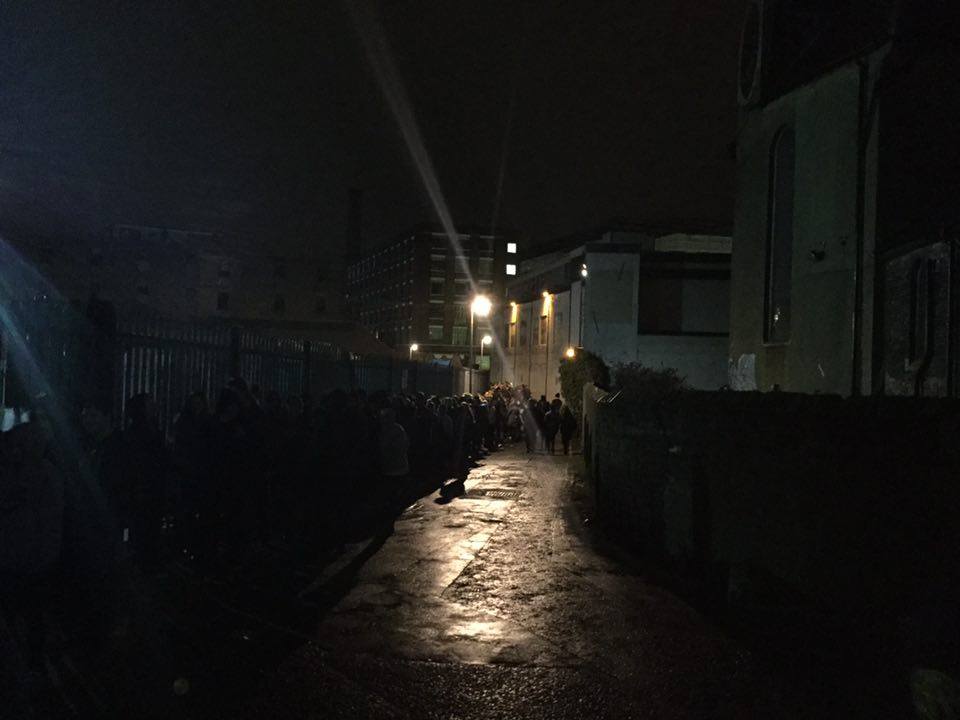 “Fuck Neck Deep mate, they’re shit,” the saying goes. “Ben’s dad owns a record label,” it continues. But, contrary to popular belief, Terry Barlow doesn’t own a record label, and according to everyone singing along in the Kentish Town Forum, Neck Deep are anything but shit. On tour for their belting sophomore, Life’s Not Out To Get You, the Wrexham boys have stepped it up a gear in terms of tour venues and tonight is no different; this isn’t some run-of-the-mill UK pop-punk show, this is a pro band playing a pro level venue. Not that any of the specifics matter to the queue that snaked round the back of the venue on a rainy Saturday evening, all 800m of people are thinking only of the music. Once we’re in its time for openers Light Years. They look a lot like Lagwagon (lead singer’s resemblance of Joey Cape is uncanny) but the sound is pitched somewhere between rock and standard pop-punk. Delivered confidently to an impressively full room, the boys from Ohio must be pleased with the reception they get. Finger-pointing? Check. Jump-around singalongs? Check. The boys done good setting the scene.

“We’re here for one reason and one reason only: to warm you guys up!” yells Will Gould, the effervescent frontman of UK goth-punk band Creeper. His solution to the problem? Circle pit. “We’ve got hollow eyes and heavy heads,” he wails in his characteristic indecipherable delivery, as the room opens up in the face of a load of teenagers running round in circles. Down the front the fingers point as word-for-word the songs are recited. Covering material from both their EPs as well as their upcoming release The Stranger, the Southampton boys surely leave an impression on the initiated and the uninitiated alike. Catchy and delivered with theatrical aplomb, this band deserve the world (and with a bit of luck might just get it).

Next up are the mighty State Champs; upstate New York breakouts and personal friends of 5 Seconds of Summer. The comparisons to the afore mentioned boyband-cum-pop-punks are obvious from the off, with the infectiously catchy single ‘Secrets’ kicking off proceedings. Bouncy and melodic to the point of being saccharine, the New York boys pull no punches in a 40 minute set that charts their whole discography. Encouraging were the responses to newer material which sounded like the crowd had been singing it back for years. “I’m a realist, and an optimist, but I swear to you I’m not getting over this!” yells frontman Derek Discanio as the crowd bounces as one. Finishing with crowd favourite ‘Elevated’, it’s a strong performance that leaves the assembled hordes thirsty for more action. And they might well get what they want, with the boys expected to return to our fair isle sooner rather than later.

As the stage is set up for the headliners, it’s apparent Neck Deep are milking their graduation from toilet circuit shows for all its worth. Ego boxes for the guitarists, flame-shaped MDF to house the amp stacks and a banner that Guns ‘n’ Roses would’ve probably been happy with, this is UK pop-punk on a scale we’ve never seen before. And as the lights dim and the Welshmen come out onto the oversized stage, it appears the hype is fully justified. From the first riff of ‘Citizens of Earth’, the Forum explodes in a riot of pointing fingers and crowd-surfing kids in baseball caps. No prisoners are taken as we career headlong into the classic single ‘Losing Teeth’, before exploring new singalong ‘Gold Steps’. Controlling the crowd like he’s been doing it for years is clearly quite the ego trip for Ben Barlow, not that this takes much from the performance. Old material from the original EPs is gratefully received. “Not getting used to it, just getting over it!” the crowd and band scream; surely no one could’ve predicted that this song would be sung with such conviction from stages like this?

The pace slows and the fingers are raised for ’A Part of Me’, by now a live staple, with vocal accompaniment from the ever-excellent Laura Whiteside. Call me sentimental or pathetic (or both), but that song will always remind me of the fantastically drunken singalong I had for this at Leeds Festival all those years ago. The encore starts with an outing for old-skool choon ‘Head To The Ground’, which Barlow plays solo acoustic, before a refreshing reworking of ‘December’ with full band instrumentation. Finishing on ‘Can’t Kick Up The Roots’, it’s apparent that Neck Deep’s new found poppier sound is somewhat usurping the grit of older offerings. Is this bad? Probably not, at least for me. This band look so comfortable on the big stage and it’s hard to begrudge them for the success they’ve enjoyed. Tonight belongs to Neck Deep, but it also belongs to all the kids who’ve been attending basement shows and gigs in crappy bars in boring towns. Now is the time for their hard work and belief to be rewarded; now is the time the UK takes its rightful place right at the top of the pop-punk pile. These next few months and years are gonna be very interesting to watch.