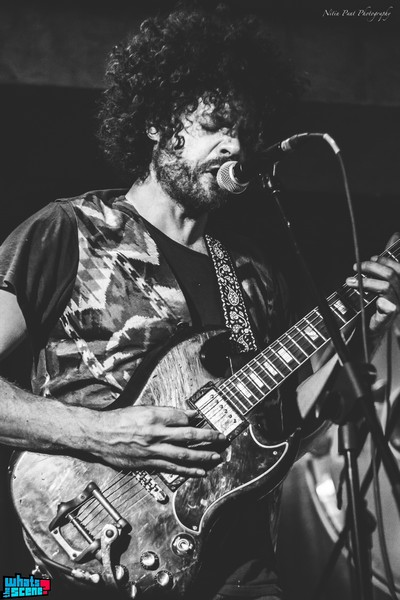 From the land down under, a band with many accolades in their pocket, Wolfmother took to the main stage at the BITS Pilani Hyderabad campus as part of their tour in India. An Australian Hard Rock band founded by guitarist and vocalist Andrew Stockdale in 2000, Wolfmother  rose to fame with their Grammy for the Best Hard Rock Performance for ‘Woman’, and ‘Joker and the Thief’ (Shrek 3 OST). They have composed two studio albums – Wolfmother and Cosmic Egg and three extended plays ‘Wolfmother ’, ‘Dimensions’ and ‘iTunes Live from Sydney’.

As a band, Wolfmother went through roller coaster rides over the years including a temporary split. The transitions led to the current line-up with Andrew Stockdale on lead vocals and lead guitar, Ian Peres on the bass, keyboards and backing vocals, and Vin Steele on the drums. Wolfmother’s music is primarily influenced by 60’s and 70’s rock greats like Jimi Hendrix, Black Sabbath, Led Zeppelin, The Doors, The Who, Beatles etc.

Wolfmother  kicked off their set at the BITS Pilani campus with ‘Dimension’ from their self titled album Wolfmother. This was followed by ‘Woman’ their Grammy award winning piece, ‘White Unicorn’, ‘Apple Tree’, ‘Mind’s Eye’, ‘Love Train’, ‘Colossal’ and ‘Vagabond’ from the same album. They topped it off with ‘California Queen’ and ‘New Moon Rising’  from their 2009 album ‘Cosmic Egg’ and ‘How many times’ from their latest work Wolfmother III. Their swan song was the famous Shrek 3 OST ‘Joker and the Thief’ also from their debut album Wolfmother.

Their music is pure hard rock with groovy styles from the 60’s and 70’s. Though critics believe they try to mimic Led Zeppelin and Black Sabbath, they have a style of their own which is a combination of modern tones with elements of the 70’s. They brought the same to the stage and their energy was just scintillating. Their stage presence was commendable as they kept the crowd engrossed the entire evening.

The band had a good start with ‘Dimension’ and ‘New Moon Rising’, however as the evening progressed, the quality of their performance started to diminish and did not quite sound as expected. By the last few tracks, it seemed like the musicians kept up the stage act but were unable to deliver with their performance. In fact, the front man’s voice was cracking up during ‘Joker and the Thief’ which was something totally unforeseen. Metal heads and rock fans were quite disappointed as this was quite an anticipated gig and given the band’s fame, this was quite a letdown.

Overall, the event wasn’t very well-orchestrated. The venue seemed too small for a band with quite a large fan following. The sound quality was awful, with speakers on one side going off once in a while, and there was constant feedback from the stage. Though Wolfmother’s performance was not up to the mark, their showmanship must be applauded – their groovy pieces, interesting solos and their stage antics kept the crowd cheering the entire evening.

Da High Tribute to U2 by The Beatroute at High Spirits, Pune

Blues before Sunrise at Legends of Rock, Bangalore