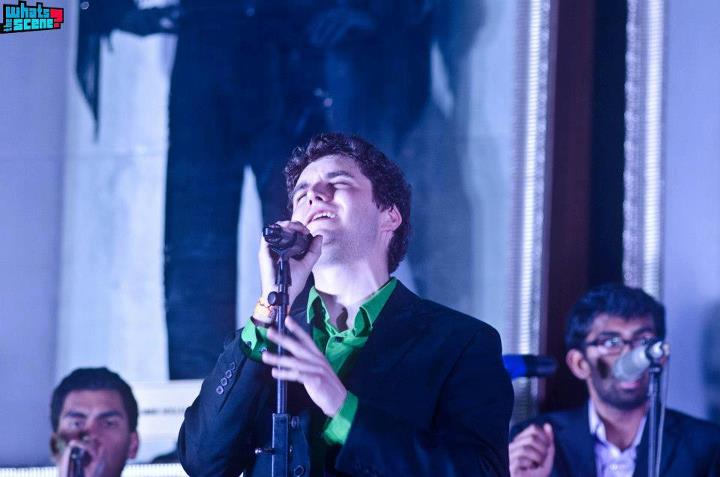 The term ‘boy band’ is dismissively used and abused as shorthand for everything that’s wrong with the music industry – whether personality-free meat puppets heeding their Machiavellian producers, or guile-less manipulation, or a general lack of character, integrity, and quality in the product itself. By ‘product’, I mean the music, but that’s the sort of word the puppet masters are supposed to use to describe something as elemental as music – a product to be hawked. However, often lost in this monetary maelstrom is that product – the songs are frequently frighteningly good. They’re appealing, catchy earworms that are even, summoning my forces of Carnatic music clichés, mellifluous.

When Penn Masala took the stage at a packed Hard Rock Café on the 10th of January, the first impression was that they were a boy band. Eleven young lads trooping onto the roof of the bar made me marvel at the structural integrity of the stage, and these gents had no instruments – they had no names either, apart from the one alumnus who joined them for a couple of tunes. The rest didn’t introduce themselves, reduced to being marked only by their quirks of appearance under their uniform colour-coded attire – that one in the waistcoat, the one who looked like a cross between Vir Das and Ranbir Kapoor, the one who looked like a lost brother of Joaquin Phoenix (See also: ‘that white guy in the brown group’), and so on.

Penn Masala, hailing from the University of Pennsylvania, are billed as one of the world’s preeminent Hindi a capella bands. A capella, Italian for ‘in the manner of the church/chapel’, has come to mean singing without any/minimal backing instrumentation. ‘Voice only’, one might say. In other words, Penn Masala were very much on friendly turf – a capella is hard coded into every Indian’s genetic makeup by that bane of school excursion buses everywhere: Antakshari.

They kicked off their first set with Outlandish’s version of ‘Aicha’, and two things were immediately apparent – that they had solid backing arrangements and that their lead vocalists were hit-and-miss, some sounding a little off key. It took a while to get warmed up, but the crowd really got going, in brazen defiance of the prevailing political climate, when Penn dove into Atif Aslam’s ‘Woh Lamhe’, with the band almost being drowned out by the crowd for most of the song.

That exuberance was a sight to behold for the rest of the gig. Penn Masala took a break shortly after, and when they returned for their second set, most of the songs (‘Tu Aashiqui Hai’, ‘She Will Be Loved’ and especially ‘Fix You’) were raucously matched by the crowd – that’s the benefit of singing popular songs that the crowd had been weaned on, or perhaps the benefit of allowing more alcohol to be imbibed.

The night’s setlist was as close to (discounting Real McCoy’s ‘Another Night’) a list of modern standards as you can get – Atif Aslam, Maroon 5, Coldplay, but as stated earlier, the quality of the singing itself was variable to an extent I wouldn’t have expected from a band that’s been around for fifteen years and released seven albums. But then I realized that Penn Masala is indeed a boy band, in the conceptual sense of the term – they aren’t a band per se, but more a brand with a revolving door of members (thanks to that annoying college conceit called ‘graduation’). I say that not as a slight, but to gain a measure of understanding. While ‘Penn Masala’ have been around for fifteen years, as too some of the arrangements used, the singers themselves are relatively wet behind the ears. Keeping that in mind, the band actually did a remarkable job of supporting each other, often adapting their harmonizing to the key of the vocalist.

Yes, Penn Masala is a boy band – literally as well, for a group of women I met before the concert told me (facetiously, of course… I hope) that they’d come to scout prospective grooms from this buffet of eligible gujju (I checked – they’re not all gujju) boys. Though not without their faults, the liveliness, charm, and the sheer energy of the crowd and band in tandem won over pretty much everyone in attendance.

On the other hand, I must mention that there was one gent who grumbled that all the people who were cheering off-key singing were a blight on humanity. It takes all kinds to make the world.