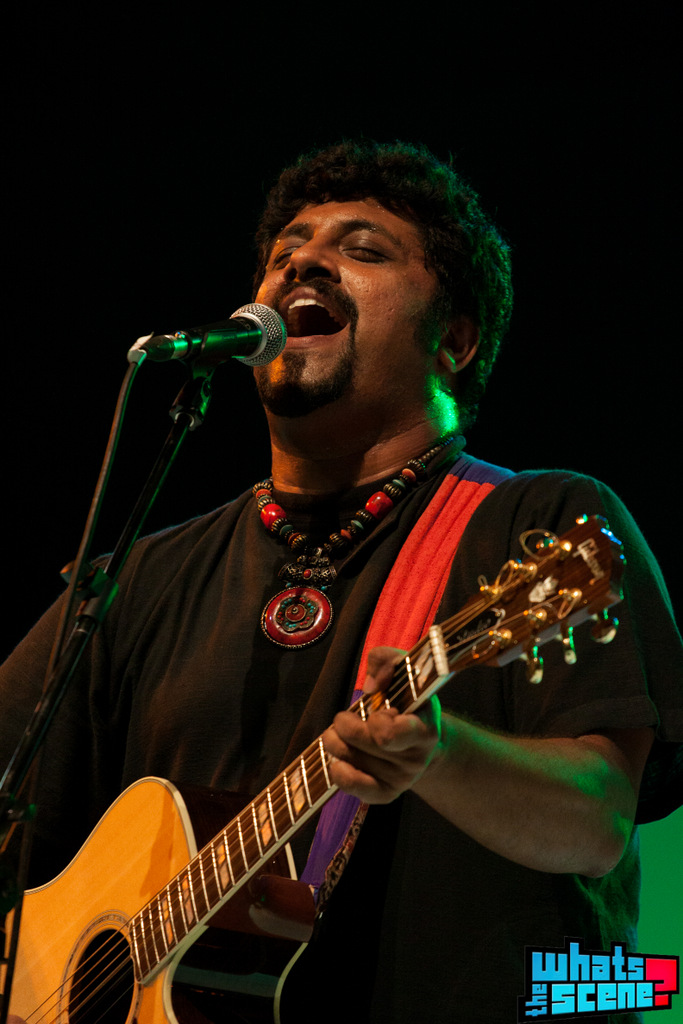 The Raghu Dixit Project stands out from other bands because of the absolute ease with which they connect with the crowd. Christmas Eve saw Opus Bangalore packed to the hilt with no space to take a step and the undeniable warmth of the Christmas spirit made its presence felt immediately. The densely packed tables placed close to the stage seemed awfully inappropriate for such an energetic show, but given the guest artists who graced the stage the past 7 days – Opus was definitely the place to be this Christmas. Raghu Dixit – almost a household name now, took to the stage at half past nine, with a considerably changed lined up – Wilfred D’moz on Drums / Percussion, a very youthful looking Parth Chandiramani on the Flute and Bryden Stephen Lewis on Guitars.

Raghupathy Dixit brought folk music to the front lines of the music scene of a city that saw all sorts of influences – from western classical music to college rock to jazz and blues, the dominion being sounds from the west. But what he manages to do is entwine eastern sounds and infuse carnatic notes with western instruments and sing in three languages (English, Hindi and Kannada) that instantly strikes a chord with the people of Karnataka. After playing ‘Hey Bhagwan’ from his debut album, with which he opened the gig, ‘Masti ki basti’ was the new song that he rolled out.  The performance of this song saw both Gaurav Vaz and Raghu jumping in unison – the rhythm rising to a lively jig that brought a smile to many faces there.

Raghu manages to bring the folk genre of Bhagavathee to the forefront with his songs. A genre peculiar to Karnataka, Bhagavathee (literally means ‘emotion poetry’) is a form of expressionist poetry and light music. Most of the poetry sung in this genre pertains to subjects like love, nature, and philosophy.

‘Kodagana Koli Nungitta’ was the next song he sang. Originally a Kannada folk song, (details of which you can find here), he turned it around to make it seem like a composition of absolute brilliance. It started off sounding like Jazz, moved into the familiar sounds of a folk song  interjected with Carnatic sounds from the flute, and culminated with Rock n’ Roll! For those of you who need an introduction to what Raghu can do to old tunes, here’s an example.

If you haven’t been initiated into the Raghu Dixit Project fan group yet, you must listen to the songs from his first album that he played at this gig – ‘Gudgudiya sedi nodo’, ‘Mysore se aayi’, ‘I’m in Mumbai, waiting for a miracle’ and ‘No man will ever love you, like I do’, the last one being a soulful melody that can tug at the heart strings of any lovelorn bloke.

What surprised me most was how the flautist supplemented the band after the departure of the violinist. I was glad to be introduced to the newer songs that he played – ‘Jag Changa’, which he said would be the title track of their next album. It had a nice rhythm and vocal parts and every member of the band sang the harmony to this song flawlessly. Another track – ‘Lokada Kaalaji’ had awesome riff lines and was fun to sing along to.

‘Yaadon ki kyaari’ was about Raghu’s childhood back in Nasik, where he was born. A laidback song where the guitarist uses a ukulele and the flautist plays the melodica. ‘Just maath maathalli’, ‘Munjaane manjalli’, ‘Neene Beku’, and ‘Mahadeshwara’ were the other numbers that they played. Considering that their first self-titled album came a full four years back, Raghu reassured the crowd that the second one would come out towards the end of January next year.

Their website proclaims the band as often being called India’s biggest cultural and musical export, and with good reason too because travelling frequently to play at countries like the US, Mexico, England (they played for the Queen on her 60th year anniversary since her accession to the throne) is no easy task. This band can only see greater success in the future!