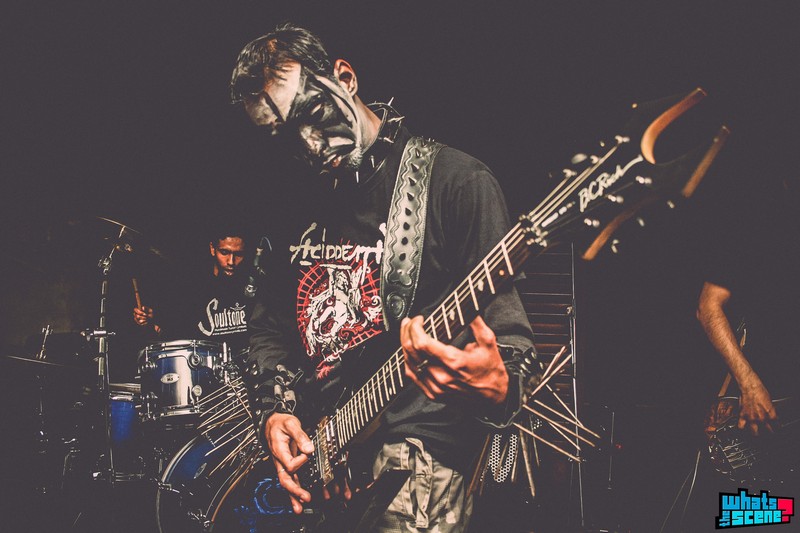 Vile Fest II promised to be a headbanger’s ball for all brutal metal fans, with eight bands from all around the country setting the stage on fire. A night of extreme metal, 2nd May 2015 was a much awaited Saturday evening.  Brutal music, brutal headbanging was the order of the day. The lineup included Escharified from Hyderabad followed by Pisakas, Dark Desolation, Necrophilia and Nauseate from Bangalore, Solar Deity from Mumbai and the grand finale by Breeding Machine from Shillong. Unfortunately, Shock Therapy from Hyderabad could not play due to lack of time.

Escharified, a four piece death metal band, raised the curtain for the evening. Little over two years in the music scene, these guys have established themselves in the Hyderabad music circuit. Their lineup includes Satyabrata on Vocals, Vishnu on the Guitar (ex- Deathnote), Sandeep on the Bass (ex- Negator) and Karthik the Drummer (ex- Human Plague). They played their original compositions starting with ‘Decisive Victory’, and went on to play ‘Diabolical Barbarity’, ‘Mutually Assured Destruction’, ‘Jallianwala Massacre’, ‘Wrath of Brazen Bull’ and concluded with ‘Hendang’r Proloy’. Their music was simple and straight up death metal with blast beats growls and that transcend into screams. Though the start wasn’t as impressive, their last track ‘Hendang’r Proloy’ sounded great.

Pisakas from Bangalore are also a death metal band, with Sourav on the lead guitar and vocals, Nilesh on rhythm guitars, Vicky on the bass and Arindam on the drums. Their set included ‘Abduction’, ‘Derogating the God’, ‘Stewmaker’, ‘Sodomized into Dementia’, ’Closed to a World Below’ (Immolation cover) and ‘Cataclysmic Impalement’. The snare sounded pitchy, giving the overall sound a funny tone. The music, except the vocals, sounded closer to thrash than death metal.

Dark Desolation also from Bangalore, an extreme black metal band with Maggot on the vox, Shredaj and Dharni on the guitars, Jake on the bass and Kartik on the drums endorses some of the biggest names in music like BC Rich guitars, Soultone cymbals, Blackstar amps, Railhammer pickups and many more. ‘Spasmodic Coitus’ was their opening piece. They went on to ‘Patricial Libido’, ‘Sorroricidal Seduction’, ‘Chrism’, ‘Apostatical Misantropy’ and ‘Incestuous Catacombs’. They exited the stage with their eponymous song ‘Dark Desolation’. As a pure extreme black metal band, these guys did justice to their genre with breakdowns and good solos, and corpse-painted faces.

Bangalore-based experimental death metal band, Necrophilia, changed the course of music for the evening. Avinash on the vocals, James Britto on the guitars, Stephen on the bass and Shelton on drums as well as vox brought in variations and technicality with a groovy touch. With a combination of OCs and Covers the set included Invasion, Harvesting the External Life, Judgment Day (Dying Fetus cover), Harlot, Mortal Destruction, Stripped Raped and Strangled (Cannibal Corpse cover). Necrophilia stole the show that night.

Solar Deity, a three-piece black metal band from Mumbai, have been in the music scene since 2011. With 3 EPs and a single in their pockets, Solar Deity is a unique band with two guitarists and no bassist. These guys proved that a band without a bassist can sound so good (though we still missed the bass guitar). With Aditya Mehta on the Guitars and Vocals, Niraj Singh Chauhan on Guitars, Yash Pathak on the Drums, these guys were brilliant. Dressed in black cloaks, Solar Deity gave a theatrical feel to their renditions of ‘Declaration of Satanic Victory and Eternal Reign’, ‘Blasphemous Chanting on a Moonless Night’, ‘Supreme Evil’ and ‘Ceremonial Feast at the Black Temple’. The drummer stole the show with his technique and style.

Nauseate from Bangalore is a mincecore band (grindcore with a socio-political purpose) that started in 2010 as 3-piece band, and they have recently added one more member to their crew. Their lineup has Charlie on vocals, Abhi Maggot on the guitars, Cliff on the bass and Karthik Pabba on the drums. Their set included ‘Your System Is Bullshit’, ‘Genocide of the Propagandist’, ‘Warsore’, ‘Bumlickers’, ‘Superstitious Scumbags’, ‘Multinational Scum’, ‘Stop Bragging’, ‘Eat Money and Die’, ‘Vicious Bliss’ and the last but not the least ’Nationalist Knobs’. While their theme is impressive, their music was a standard mixture of blast beats, riffs and growls.

Technical Slamming Brutal Death Metal is one long genre name but the boys from the hills will be remembered for more than the title of their genre. Breeding Machine from Shillong was originally Contaminated Error. After a lot of changes the current lineup is Chivalrous Matthew Pyngrope on vox, Kenny Kharkongor on lead guitars, Suraj Pradhan on the bass and Adarsh Pradhan drums. Due to lack of time they played only two pieces – ‘Torture Bleeding’ and ‘Bloodshot Gullet’. Technically sound with groovy tones, this band kept the crowd headbanging till the very end of the show.

Though the turnout was small, the musicians and the crowd had great energy. Sound seems to be the hardest thing to get right, but that did not dampen anyone’s spirits. The best part of the gig was that almost all of the pieces were OCs indicating that metal music in India is evolving. However, when it comes to showmanship, black metal bands still have a long way to go. The crowd fell in love with Necrophilia and Solar Diety. With seven bands coming together to perform from across the nation, it was one hell of a gig. Overall, the concert was a great success and, despite all the odds, the organizers put up a great show.