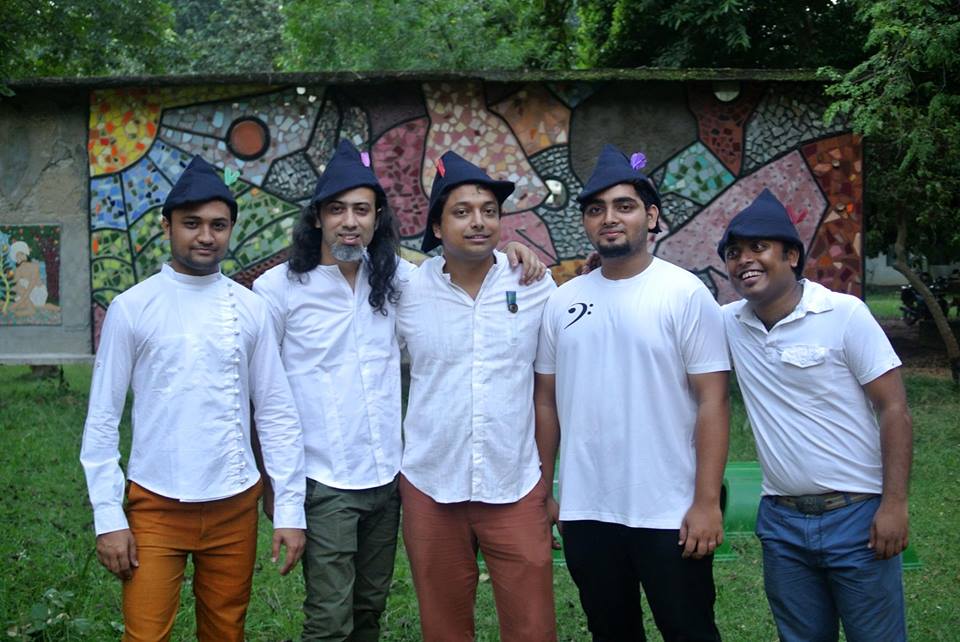 I tend to start on a new piece of music with a single question – “What does it feels like?” It is a simple approach that often assists with sentimentalizing the song, in ways that are both useful as well as generating bias. When I heard Bemanan, I was worried about the latter happening, because when I asked myself what their sound feels like, I found myself having a lot to say.

I started with ‘Damal Chele’ off their eponymous album, and it was a good one to dip my toes in. Their music holds itself to impressive standards, and yet, builds itself around a nerve of casual serenity. There are numerous moments when it twirls on the edge of incoherence, but the effect seems almost purposeful and is perceived only after numerous replays. This quality, coupled with stellar production, might just be the perfect encapsulation of what this band represents – a thoughtful ease. ‘Kato Gai‘ toes the same line of sentiment, but dwindles into trippier phonetic territories. This altering of inclination keeps the listener in the throes of a pleasant anticipation that is amply satiated by the last song.

“I knew Sayatya and Zubin from their Jack Rabbit days. I guess they knew me as the mandolin player for Fiddler’s Green. I had met them a couple of times at various gig venues and at Sayatya’s music school called Space. At some point Sayatya called me to check if I am keen on playing with them as a part of a new trio, doing acoustic original music. That’s how we met and started jamming on a few songs, and very soon we came up with the name Bemanan and did our Choupahari sessions.”

The Choupahari sessions had the three guys standing in the green recesses of the Choupahari forest at Shantiniketan and singing to the accompaniment of their strings as well as the wind and the shiver of the leaves. As seen in the video below, they are entirely unperturbed by dogs lounging around or a cyclist whirring by. A better introduction to their sound could not be imagined.

Satyata Mallick sees it as :

“… freeing ourselves to record amidst nature. The sound of our voices and instruments among the trees, leaves, the fresh air and the open skies… our friends at Notsoabsolute Films made it possible.”

“This came before our first album and we intend to do more of these sessions. The idea is to record music amidst nature, outside the confines of the studio. I think the music we have recorded outside is more spontaneous, more relaxed and organic. In fact, when we went in to record the album, we kept the same aesthetics to get some of that energy and realness into the album. If you listen to the album, it sounds just as we do live as we haven’t done much post production polishing to it and we have recorded it live as well. ”

He also mentions plans about working on a second round of them.

In terms of their musical philosophy the three men with demanding careers in advertising, accountancy keep it staggeringly simple. One must allow Satyata’s words to explain :

“It is about playing live. Feeling the moment together when we perform. Its about writing songs that talk about the varied colours of the self within.”

As effortless as it sounds (and almost a tad cliched, for any of us who have been immersed into any form of art whatsoever), it has led to the emergence of admirable musical nuance and intrigue.

Their artistic camaraderie is also as succinctly summarized by Diptangshu Chakravarty :

“I have noticed that I do not have to explain myself too much. I just start and soon I feel that I am understood. Be it some tune on the bridge of a song, a verse, chorus, or some thought on album design, promotion, anything… we are almost always on the same page.”

Satyata seconds it with confirming the presence of a “Common source of ideas, feelings and thoughts which we discovered.”

I’d say they have it right. The interspersing of sounds is almost lovingly made in the strain of laying a tapestry of laid-back intimacy. Try ‘Deyaal‘ to see what I’m talking about.

“It’s trying to hard to be Bollywood. We like some of the music that’s happening and we dislike some! Not trying to be diplomatic here…I think Bemanan stands out pretty much as something different… whether people like it or not, time will tell.”

“Bangla music is a huge term. A galaxy doesn’t need a fort! But for new Bangla music, there needs to be an eruption of good heartfelt work. At the same time listeners need to give it its due. The problem nowadays is the sheer quantity of music that is happening. Before you can truly start appreciating something, you move on to the next! The question is whether the existence of any new music is fortified.”

While Diptangshu Chakravarty leaves it at :

“I grew up listening to Bangla music. Your deepest emotions are best expressed in your mother tongue, isn’t it? I am too much into it… be it Baul, old film songs, jibonmukhi, adhunik… About its existence, well I am incapable of answering that but we are trying. ”

While they wrote most of their own music, they have also covered some of the songs written by  by Arunendu Das of the legendary Mohiner Ghoraguli. I’d recommend that you start with the futility of despair as elucidated by Arun da in ‘Ki Labh Knede‘ :

The band is well aware of the distinctive nature of what they offer, an assurance evident in the comforting harmonies of  ‘Tumi Aalo‘.  They seem just as high on self-awareness :

“Bemanan certainly doesn’t have a 1:1 offer that would make you instantly high. But if you give it a few listens, you are likely to keep listening thereafter.”

Admirably, they stand firm in creative conviction in the face of inconvenience and lose opportunity. To quote Diptanshu Roy :

“We don’t aim at getting into the rat race to become superstars. We are honest in our approach. and we aim to do our songs to the best of our ability. We record them and arrange them like we want to… We don’t want to take any names but we were selected and then dropped from a festival schedule, because we didn’t want to use drums for our set!”

With the promise of new material, the band assures that fans can find much to look forward to. To quote Diptangshu Chakravarty :

“People can relate to us easily because the songs are based on relationships, introspection, urban lifestyle, etc. At the same time we offer a new texture of musical background based on acoustic instruments. They cannot dance to our songs the way they do at a disco but we would leave a mark deep inside their heart. At least that is what we think!”

I leave you to make your judgments on the twists of melody that holds together a world of emotive multiplicity. I’m almost entirely sure that you will find something to relate and perhaps even make ‘your song’.

Check out their music at :

And support them at :

The Big Story: Ma Faiza – The Queen of Electronica

Interview with Rami Mustafa of Nervecell

Interview with Marten Hagstrom of Meshuggah at GIR Bangalore 2010