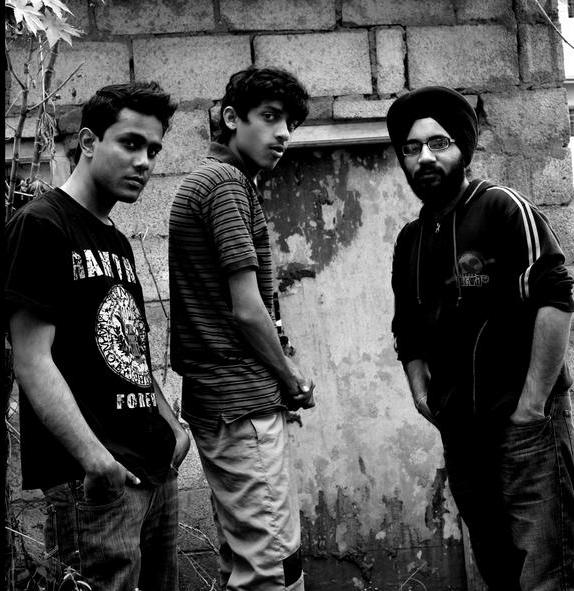 The Scratch Card Winners was formed on a lazy afternoon in 2009 with the sole intention of creating noise and waking up the neighbourhood and is one of the only active punk bands in Bangalore city. The Scratch Card Winners is Zoe(vox, lead guitars), Noel(rhythm guitars), Mike(drums) and Aamir (bass). WTS got in touch with them and spoke to them about punk music in Bangalore and more…

WTS: Tell us about how The Scratch Card Winners came into being.

Zoe: Before we started this band, I won a lottery. I won quite a lot of things including my current guitar which was given by Opeth when they were touring India in 2008. Around the same time, I formed the band, so I thought we could have a suitable name, it’s about guys who don’t have anything in life want to make it big, but how do they do that? – by earning quick money. That’s how the name came about. The band came out in the month of April 2009, I got my ex-drummer Shashi, and I had quite a number of jams with him, then I got my ex-bassist Gagandeep who had come all the way from Punjab, he came and joined my band around the same time he just came into Bangalore, that was the time when we formed the proper line up of The Scratch Card Winners.

WTS: What made you choose Punk as your genre?

Zoe: I was in a punk band from 2005, we were called String Sick , we started off as one band and then split into two – String Sick and Usual Suspects, we were the only bands who played punk music in Bangalore. Punk didn’t just come about because we wanted to be cool, it was more like a statement. We aren’t writing songs about using drugs etc. It’s not about that, it’s about things happening in and around us that are affecting us. If you Google it, punk stands for rebellion. We chose punk because it just came naturally to us.

WTS: Do you guys see the genre gaining more popularity in the coming years in India?

Zoe: It’s growing. I have seen the support for punk music change. Like Metal has death metal, doom metal and thrash metal, punk has different varieties, I have seen bands that play pop-punk but of late I have seen bands who’re playing underground stuff, more hard core stuff, which is the punk of the 80s and the 70s. I have seen the quality of the bands improve. Right now, I’m managing a radio podcast called One Punk Nation. I have interacted with most of the bands from Brazil and Asia and they want to know about the Indian punk scene and I’d be very happy to give them a list of the top ten punk bands from India, who could well be the future of punk music in India.

Noel: Before I joined Zoe, I hadn’t heard of any punk bands, frankly. Everyone was just playing rock and metal, and trying to make it complicated. Punk music is about keeping it simple and in-your-face, actually. Over here, I guess it’s catching up, everyone’s growing tired of the whole metal thing. If you listen to something complicated, it’s too much information. If you have a simple tune and sing your heart out, that’s the way to go. I’m kind of new to the band, Zoe does most of the composing and stuff like that, and the lyrics of course!

WTS: How has the response been to your music so far?

Zoe: Let’s say you like biryani, and suppose someone gives you pasta for a change, how would you like that? You may not like it, but you can never ignore it. During the first gig we had a mixed reaction. There were ten bands, eight of which were metal bands, we had the edge that time. It was something different that people took notice of. The kind of reaction we’re getting now – it’s still mixed, it’s gonna take us time. I think the Bangalore crowd is very intelligent, they know what’s good music, and as long as it’s good music, they will enjoy it. I think whatever shows we’ve done of late, they have enjoyed it.

WTS: What are the themes that your songs are based on?

Zoe: There’s this demo we had released sometime ago; it’s called ‘Time-pass Suicide‘, the song I wrote about a guy going through difficult stages, it’s about a guy who tried to commit suicide, but couldn’t do it. It’s the story of a loser who wants to do something in life. We have our own share of socio-political songs. A majority of punk bands have that. One of the songs is based on the Bhopal gas tragedy, it’s called ‘Devil’s Own Company‘. We wrote about the company which was a part of that disaster. I’m from the North East, we face a lot of racism from the Indian army. We’ve seen people from the army carrying girls from the villages just because they look different. So I wrote a song called ‘Freedom‘ that talks of the racial discrimination that goes against people from the North East. The song was about asking them to stop what they’re doing to us, to let us live in peace. Give a little bit of space to us and understand who we are.

WTS: What is distinctive about your band?

Zoe: The sound. We need a little bit of variety, where is the punk crowd? There are other forms of music. It’s dying or dead already. What sets us apart is we’re playing punk music, which is kind of extinct right now. We’re trying to revive that. Musicians are dreamers and they’re passionate about their dreams. We believe that the music is going to reach out to the audience at some time or the other.

WTS: What are your plans for the future? How do you plan to promote your music outside Bangalore?

Zoe: We have been asked to play in Malaysia, Kuala Lumpur. We are the first Indian punk band to be called for that. This is happening late October. I’m hopeful that if we have a local base which is as strong as outside then we’re going to do well.

WTS: What kind of antics can we look forward to from you guys when you’re on stage? Do all your bandmates sport funky hair dos?

Zoe: High volume, high energy. That’s all I’d say! We got banned in a pub because we spoke against the owner! (laughs) My new bassist is from Dubai, you can expect a Sheikh’s hairdo from him (laughs) , I used to sport spikes earlier but these days I wear a cap!

WTS: Have you ever received criticism for your performances and what are they mostly about?

Zoe: We have received a lot of criticism. It’s not been easy being a punk band. People think the music is easy, there’s more than what you see. We have to let them know that it’s not always about technicalities, its more about free and open music. People have said stuff like they’re three-chord-junkies, not technical, it is easy music. We have received a lot of comments. It’s a part of the game.

WTS: What led to Shashi’s departure from the band?

Zoe: Shashi was one of the founding members of the band. He’s a perfectionist, whatever he does, he likes to do it perfectly. When he was doing his job perfectly, the band was suffering and when he focused on the band, the work suffered, so he quit both. Now he’s pursuing his studies in CA.

Zoe: Our album is in the process of being recorded. It is called Inertia. We are 40% done. The mixing is pending and some new songs have to be added. We’re going to make it available for free download, and for those who really like our music, they can pick up a CD too.