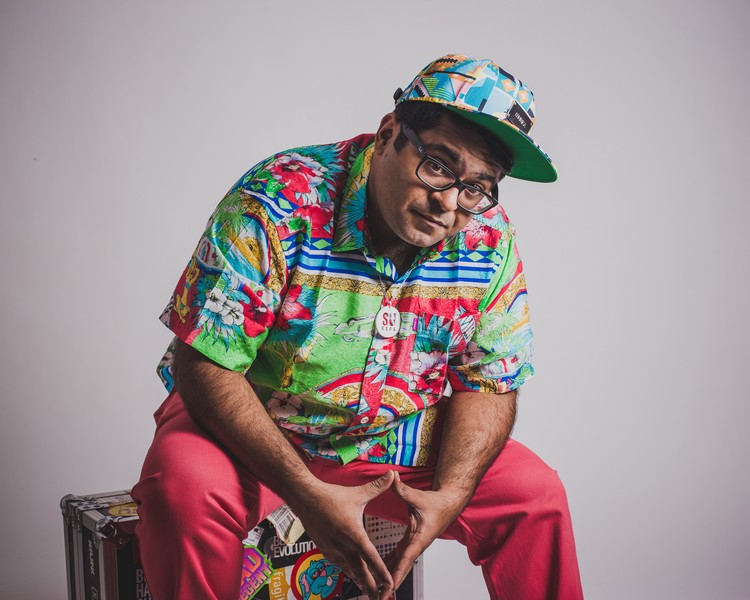 Su Real is the alter ego of Delhi-based Suhrid Manchanda. In the realm of dance floors, he rules supreme whenever he takes over the DJ console. Belting out song after song in his trademark bass-heavy style, his knack at recognizing and delivering what the audience wants is commendable. He released his debut EP ‘The Grind’ in 2013, and quickly followed it up with his first LP ‘Trapistan’ in 2014. Not restricting himself to any one genre, Su Real has explored multiple avenues in his songs, which lend a robust, no-nonsense, beat-driven feel to them. His most recent EP ‘Brown Folks’ released last month, and he is currently on tour promoting it.  Read on to know how his sound has evolved in ‘Brown Folks’, how he transformed the sleepy Hauz Khas village into the party-goer’s destination, how he relaxes after a particularly tiring set and his thoughts on the perennial question of mainstream versus underground.

WTS: You are known on the clubbing circuit for playing really long, dynamic and diverse sets, that go down very well with the audience. How do you keep the party going?

Su Real: Wow, it’s nice to be known for something! Well, first and foremost, it pays to be prepared. I continue to be shocked by certain DJs who almost never rehearse or practice. It’s really like playing any live instrument and the art demands hours and hours of practice and preparation. Its like sure, anyone can pick up a guitar, learn 4 chords and get on stage – but if you want to do solos, write complex arrangements or just even be able to perform without making a single mistake, you have to practice!. If you look at my setlists or “crates”, by now I have over 100 sets organized by BPM, genre and theme – and I’m constantly practicing them and improving on them. That means that no matter what situation I’m put into, there’s a strong chance that I can adapt to the crowd’s needs at any time of the day or night. Secondly, it helps to be healthy! As a notoriously self-destructive personality, it’s been a long struggle to curtail my bad habits. But as I’m learning from friends like Reggae Rajahs who run and jump all over the stage, and also Nucleya who takes flying leaps from above the DJ console, being a live performer these days means more than just playing a song. If we look at a lot of the top DJs and pop stars – having super busy schedules and not being able to take time off for sickness or recuperation – they all have personal trainers who make sure they stay fit and healthy with a good diet and exercise routine. We are after all only human, and only  when the body is operating at 100% can we deliver 100% to the audience and fans.

WTS: What’s your idea of unwinding after a gig?

Su Real: I might not be your typical DJ in this regard… Not too long ago, I started shunning the after-parties in favor of a quick shower (Su Real shows get hella sweaty & dirty!) followed by some nice food and watching cartoons. Maybe a couple of close friends will be around with me, but definitely not a crowd. Sometimes I’m so pumped from the gig that I dive right into producing music until I finally pass out around sunrise.

WTS: Your recently released EP ‘Brown Folks’ has a more catchy, pop vibe to it as compared to ‘Trapistan’. Was it a conscious decision to change your sound?

Su Real: Yes, absolutely, it was a very conscious decision. First of all, the line between what’s underground and what’s commercial has blurred so much that it’s almost disappeared. The common listener might not realize this, but as a music specialist in a way it’s my job to understand this. Many of the artists whose music I spin in my sets or whose sound my production style is similar to went from being underground to mainstream in the last couple of years – from Baauer’s “Harlem Shake” blowing up to Major Lazer, DJ Snake, Dillon Francis, etc. At the same time my sets are largely based in hip hop – and so I’m working with Grammy Award winning or nominated artists – Jay-Z, Kanye, Drake, Nicki Minaj, etc. Even pop stars like Madonna and Justin Bieber are working with underground producers! So, after being underground for pretty much my whole life, we’re at a great position now where it’s possible for underground genres to seek wider commercial acceptance, and even mass appeal. Especially here in India, where the underground is a tiny niche compared to the massive mainstream, any artist seeking a viable, sustainable career eventually comes to the same realization. But at the same time, here in India now, because so much of this scene is brand new and there are still so many young people being exposed to these sounds, genres and cultures for the first time – and there is a demand for it – it’s possible to be the gatekeeper that connects the dots for the Indian audience, helping them better appreciate and understand what they’re dancing to.

WTS: You were pivotal in the transformation of Hauz Khas Village from a sleepy avenue to a one-stop partying destination in Delhi. Tell us about the journey; everything from the concept nights you introduced, to your stint as the resident programmer/DJ at The Living Room.

Su Real: Wow, that was a relatively short journey actually, but what I have to say about it could fill up a book! I think the main thing at T.L.R. was to support the local creative arts communities. At the time T.L.R. opened in 2009, there was still almost nowhere for local bands and underground artists to perform. We became a de facto live music venue and hub for all kinds of creative types. Part of this success in my honest opinion was also the training of the staff to respect and appreciate the artists. Also, waiters were instructed that it was OK if some guest was only there enjoying the music and not ordering any food or drink. The reasoning was that that guest who enjoyed his T.L.R. experience would then tell their friends and come back – not just for more gigs but also to spend money on dinner, lunch, coffee, meetings, birthday parties, etc. Unfortunately these days a lot of bars and clubs are under such financial pressures that prices skyrocket and customers are pressured to spend, rather than enjoy themselves. Our philosophy at T.L.R. was always the opposite: create a welcoming, safe and yet exciting and dynamic environment to appreciate the finer things in life and commune with old friends while making new friends – and eventually the financial rewards will find their way to you. It was a long-term strategy and for a while it really paid off. We introduced concept nights for Halloween, Carnival, Christmas and other occasions to expand peoples’ mindset about what event curation could be, beyond the banal “happy hours” concept! We had a small space and small budget but I like to think we pulled off some grand feats! All with the support of friends, regular customers and extended T.L.R. family who all believed that we could do great things together. Unfortunately, all good things must eventually wind up, and for reasons too complicated to elaborate here, I decided to leave T.L.R. as simultaneously while people were recognizing Su Real as a DJ, unfortunately T.L.R. the venue was facing numerous authoritarian pressures – and also intense competition as the H.K.V. area exploded from 6 bars to 60 F&B outlets!

WTS: Artists these days stick to their own sound and refrain from experimenting with stuff that will please the audience. Do you think that affects their careers? More importantly, to what length should a musician be true to themselves? Is there a middle ground where both the artist and the audience can be happy?

Su Real: What a potent question. Whether you realize it or not, this question frames very accurately a debate I often have with my fellow musicians and music industry types. It’s a basic conundrum probably as old as civilization itself: as artists it’s our duty to create meaningful art, but as entertainers it’s our duty to please the crowd… Although it is usually en vogue to criticize and make fun of mainstream artists, I have often been critical of Indian musicians who veer too deep into the underground. Unfortunately, 99.9999% of Indian audiences are just not sophisticated enough to appreciate it. And worse, sometimes it discourages audiences who are genuinely interested in new experiences and sounds. Inspired by music from the West, too many “underground” music followers in India are often ignorant of the socio-economic circumstances there that leads to underground music. For example, the last time techno was underground in my opinion was when poor African-American youth in Detroit ghettos were messing around with stolen and borrowed equipment. When upper class Indian kids spend lakhs on computers and equipment to party in chi chi nightclubs in 5 star hotels with other upper class kids – I wouldn’t accurately call that underground anymore! But also, one must be aware that it’s a cycle: EDM was once underground (Dutch House), Rock n Roll was once underground (Chuck Berry, Link Wray, Isley Brothers), even Jazz was once considered a freaky new form of terrible music created by “outsiders”. There’s a cycle whereupon some underground music breaks through to the mainstream – but I don’t find that sufficient reason to start hating an entire genre of music or a single artist just because they’ve been exposed to the mainstream! Anyway, it’s important to remember these two extremes are not the only possibilities – there’s plenty of space to position oneself between staying true to yourself as an artist and yet adjusting yourself to market requirements in order to have a viable, sustainable music career. Everyone has to decide for themselves where they lie on that continuum. Personally, I believe that if you have truly developed your own style of songwriting and/or performance, you should be able to play any kind of music and yet listeners can still recognize that its undeniably you. It’s also possible these days to use pseudonyms for different projects – so you can have one project that’s all your underground, stay-true stuff, and then an alter-ego for more commercial stuff. But it’s a reality in the creative arts that any graphic designer or stage actor or performing dancer will be quick to inform stuck-up musicians: if you want to make a career out of this, you will have to adapt to a large degree to what the client or audience demands… the trick is to get them to demand YOU!