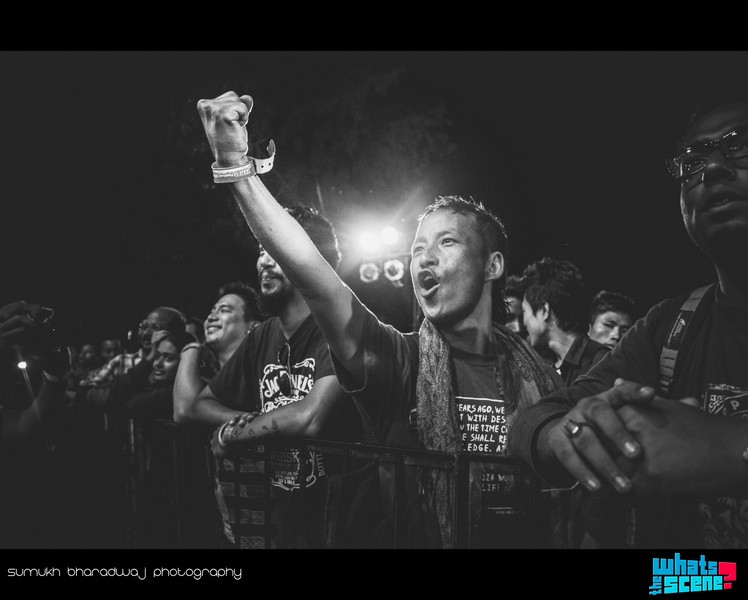 India’s independent music scene is apparently flourishing. You have more festivals go to, scores of new bands or soloists crop up every month to offer original music and we have a plethora of websites and magazines to keep us up to date on what’s what and who’s who in the world of non-Bollywood tunes. All of the above might give most of us a twinge of radiant optimism, but turns out the “system” has a huge flaw. It is one you would expect, and it is one that debilitates it entirely.

Musicians are not getting paid. Music doesn’t come cheap, despite what we’re told about the ethereality of art. Instruments have a price, as does studio time and travel. A great track might generate applause, but applause doesn’t pay the bills. Of course, no one who follows India’s local music circles is actually unaware of the fact that bands aren’t getting paid. It is a common lament, yet we seem to have sadly made peace with the fact that this is part of being a musician.

Nolan Lewis of Kryptos fame recalls, Back when we were eager to play any shows that would come our way, we’d fall for anything anyone would tell us when it came to payments and other things like travel reimbursements etc. But after a while wed just had enough and we decided it was time to put our foot down and get paid in advance. Of course, we weren’t offered as many shows as before due to our stance, but it’s been good for us in terms of being in control of things from our end, rather than depending on someone else. We’ve gone through many instances where we haven’t been paid what was promised even after hounding the organisers for months, or we’d get stranded in some godforsaken place because we didn’t get paid or reimbursed.

Srikanth, the artist manager for MotherRoot has a similar story, Delayed payments to artists is a big issue. Unfortunately, there aren’t any standard terms or contracts with most venues. Booking of artists is still largely through verbal contracts or just a basic mail exchange. So bands/artists have to keep following up with venues to get their payments; it often goes bitter because bands have no option but to first resort to public shaming and defamation before going legal. As everyone in India knows, legal action itself is a very long drawn out process. It firstly requires the bands to unite and file a case together because individual cases hardly make a dent and most bands don’t have the financial means or know-how of such processes. Artists need to unite and the industry needs a standardised process for booking and paying artists.

Bangalore-based rock band Rainburn’s vocalist Vats Iyengar says, “It is hard to get promised payments out of venues and promoters. There’s very little support for bands in the scene. You can see how some of the bigger bands have been completely silent – they’d rather forgo their money than speak out against the injustice.”

Muttering along the lines of how making it big is a struggle, especially in creative circles only serves to reinforce the idea that it is okay not to reward someone for good work until they are famous. It is hard enough to put up song after song on Soundcloud hoping that someone will notice and offer a record deal or self-fund an album and a tour and hope to get booked at a festival. To deprive the artist of payment, signals a fundamental lack of appreciation for the effort they put in. Creative work is still work, and musicians also have bills to pay.

Sahil Makhija of Demonic Resurrection considers himself one of the few lucky ones, Thankfully DR has not had too many issues with non-payment of dues. It has happened maybe 2 or 3 times at best. Nonetheless, the example he gives is telling of the larger picture, Once at a college festival we were supposed to be paid Rs. 5000 in cash before leaving the venue which didnt happen because the students made some excuse and then of course no matter how much we tried after the show they were not reachable. Another time in Delhi an organizer messed up the cabs and the whole band missed the flight. We were asked to book the tickets and were told that he would transfer the money later. He vanished after that gig.

Gaurav Vaz of The Raghu Dixit Project says that while they do not face outright denial of payment, delays are still prevalent. For people who invest both soul and finance into their music, this spells a fair amount of trouble. As he puts it, There have been instances in the recent past when our payments have been delayed by quite a bit, but they have eventually come through and while it is not the best thing in the world to keep following up for what is rightfully yours, you need to know how to deal with the situation. He is quick to affirm that this is an issue that plagues every business in the country, especially the creative industry, but also follows up with the fact that artists themselves need to be more assertive of their right to remuneration. The artists have a lot of control and they need to exert that when required to ensure that payments dont become a bottleneck. This is where management needs to step in and shield the artist from all that goes on in this regard.

Vaz and TRDP were forced to deal with an unsavoury promoter at Octoberfest, receiving their payment only at the intervention of Kingfisher itself. We performed there and we did not get paid for it. The promoter who runs that festival completely failed all the artists who were booked and was defaulting on our payments, but Kingfisher, the sponsors of the festival stepped in and ensured that all commitments to artists were honoured and it was they who paid us.

He does empathise with the plight of promoters who find themselves at the mercy of sponsors that delay or deny the money, From the promoters point of view, and I have been there as well, money from sponsors takes its own sweet time to arrive or sometimes doesnt arrive at all, and they are paying out of pocket for most immediate expenses, so in turn, they end up delaying things and defaulting, so its not one person who can take the blame for this and it requires everyone involved in this eco-system to work together to ensure that things get done right.

Arpan Peter of Overture India prefers to see it as a combination of disappointments, I don’t think I have a very clear solution for this but these struggles are pretty frequent. It is usually okay with clients who follow a payment cycle of 30-45 days after the submission of invoices. There are times when you collect 50% advance and clients make you run for the other 50%. It all comes down with how stern you are with the client who is giving you the show.

The uncertainty that plagues indie musicians possibly emerges from the idea that music not sanctioned by appearance in a movie, Bollywood or otherwise, or by the parameters of traditional classical greatness is not indispensable. Given that the tracks of Madboy/Mink or Parvaaz have begun to make their way into peoples playlists only recently, the populace still possibly considers indie music a fascinating but passing phenomenon. In addition, while India has a rich history of albums and music videos, the go-to destination for a new song has been, largely, a new film. However, this reason is no justification for the fact that independent art is taken for a ride every time it claws itself into some form of prominence. While the blame game does not make sense when targeted at a particular individual or section, it must be acknowledged that the system needs greater organisation and most importantly, greater accountability. It is deeply unfair if only artists with major fan-bases can command the right to be paid for work.

Manojna Yeluri, Legal Consultant, Researcher and Founder of Artistik License thinks the problem crops up frequently enough to be considered a menace. She explains that the very nature of the industry does not facilitate binding agreements, The issue is a difficult one largely because of the informality in which business is conducted. The entertainment industry, particularly the process of securing and performing a gig is still something that goes largely unregulated or rather follows a pattern that is more personal and less formal. There has been a change in the attitude of artists; however, we are still seeing many artists and venues/organizers struggle with resolving this problem. The fact that there is often nothing in writing accompanied by the fact that not too many people have the resources to invest in pursuing this legally, makes the entire problem a rather murky and difficult one.

The independent performance scene continues to be ruled by a strong sense of informality. While we are seeing a number of professional artists, the scene itself is marked by a strong lack of professionalism and this leads to non-payment for performances and services rendered by an artist. Having said that, non-payment is only the tip of the ice berg and we need to see and invest in a bigger change of attitude towards the arts and artist community, if we want to see lasting changes.

Her words would serve one well if they are planning to venture into the scene:

For starters, it is always good to get things in writing. Even if it is an email, it is worth something, more than just someone’s word. Even if you have the opportunity to work with a friend or someone you’ve known for years, it’s always important to remember that things need to possess a certain degree of formality. In addition, always make sure that you are aware of your rights as a content creator and performer. Insist on systemic change rather than an individual one wherein we work towards building a culture where artists are treated as professionals and it’s okay to receive a part of the money upfront too if required.

Heathen Beast to release new EP ‘The Carnage Of Godhra’

Goa Goes Jazz – A month-long celebration of Jazz in Goa!