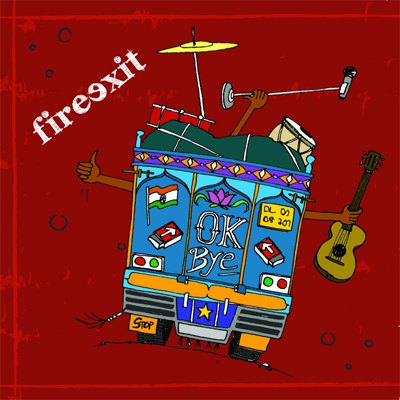 Most people first got a glimpse of Fire Exit through the 2008 compilation release, Stupid Ditties 2. ‘MML’ was one the songs that stood out as it had a different vibe to it. Their debut EP has managed to capture the same easy vibe. Although the songs are complex in terms of time signature switches and vocal harmonies, the collection still comes across as simple yet thought provoking.

Subhadra’s vocals ring of familiarity, but you’d find it hard to really settle on a definite influence. Her voice sounds mature yet innocent as she delivers textures of harmonies on ‘Waiting For’. Nice subdued percussions close the song out well.

‘Poison Ivy’ starts off with a Tabla and Guitar intro. Varun is on form displaying some great tabla work and the whole band sounds great on what is my favorite song on the EP.

When I heard the guitar intro of ‘Vacuum’ I went straight to my guitar to learn the riff. Beautiful acoustic harmonics and great delivery in the vocals as she dips in and out of the blues scale in parts.

‘The Spark’ has a very RHCP feel to it with its pronounced bass line and clean guitars with slight swells. The song just goes ahead and reminds us all that we’re listening to a band that has defined their music and know enough about themselves to write honestly and intelligently.

‘Heroes’ has a nicely crafted rhythm that suddenly turns into a driving groove as Subhadra croons “You don’t remember all the times you failed, as long as you know you’ve tried.”

Its only fitting that the placement of ‘MML’ is last on the EP. Nice blend of jazz chords and progressive bass lines. Superb harmonies and definitely the lead song of the EP. ‘MML’ closes out a great offering by a talented bunch of musicians. The album is well produced, and the art work on the cover is unconventional and goes well with the band’s sound. If you haven’t heard them yet, listen and order a copy.