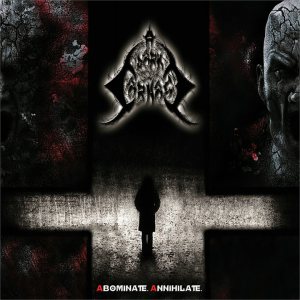 The North-east is the ‘elephant in the room’ for the current Indian metal scene. Everyone knows the level of metal that comes from there, but no one wants to talk about it. Whether it is the fact that the bands themselves don’t blow much of a trumpet about their own music or whether fans feel more comfortable with the already well-established cities like Bangalore or Mumbai, the ‘elephant in the room’ needs to trumpet louder. Dark Carnage, a melodic death metal/metalcore outfit from Guwahati, seems to be ready to take up exactly that very mantle.

While the idea of an intro song has become a bit clichéd in metal now, the one here is not one that has a ridiculously orchestral tune that in fact probably has nothing to do with the band’s style of music anyway. ‘The Unfolding’ starts with a single guitar and builds gradually into an ambient, bass-driven melody that sounds like a tune of things come. The keys are a great combination of digitized chimes and resonating twinkles. The transition into the next track ‘Tyrannical Generation’ is also interesting because it falls halfway between an ending and continuation and a sound effect slice thrown in-between. The songwriting that the band incorporates involves low-end chromatic arpeggios and the right amount of chord-play. However the ‘core’ element of breakdowns is there as well. Now while this can be a major deterrent for purists, the breakdowns are not just mundane moments of staccato silence. They are in fact very well filled in by the keys. The interest is kept up on the next track ‘Undead Redemption’ which has a regular melodeath-styled syncopated riff to it. That and the following track ‘Deathmatch Destruction’ keep up the melodic death metal influences of the band and utilize breakdowns only when necessary. The champion track on this EP though is the last track ‘Acrimony of Terrorism’. It is heavy and yet contains quite a bit of emotion as well. As a song that shares the sentiments of the intro ‘The Unfolding’, it is a fitting final track.

The keys by themselves are a breath of fresh air. They are not the run-of-the-mill, ambient sustained chords nor are they just blatant twinkle echoes matching exactly what the guitars play. They are a great mix of piano mirrors (of the guitar riffs), synthesized loops and the occasional orchestral hits. They do a great job intertwining with the rest of the rhythm and sounding like an inseparable part of it. The vocals are regular death-growls and while they don’t really have anything bad about them, they are not very spectacular either and seem to do the job for the band’s style. One notable thing however is the fact that they are actually guttural enough to be called ‘death-growls’ and not the fake larynx-driven croaks of most metalcore bands of today.

The mood generated from this album is one of concern for matters both personal and political. The riffs are relevant, the breakdowns are balanced well by keyboard elements and the drumming is not just an over-the-top display of the drummer’s double bass speed. The band also manages to mix the songwriting up quite well, with full riffs for the most part and only patches of breakdown section, where the groove is the major driving force. Personally I have not heard too many bands of similar genres but if you’re a fan of Veil of Maya or Born of Osiris, pick this CD up. Or just pick it up if you’re a fan of great music.