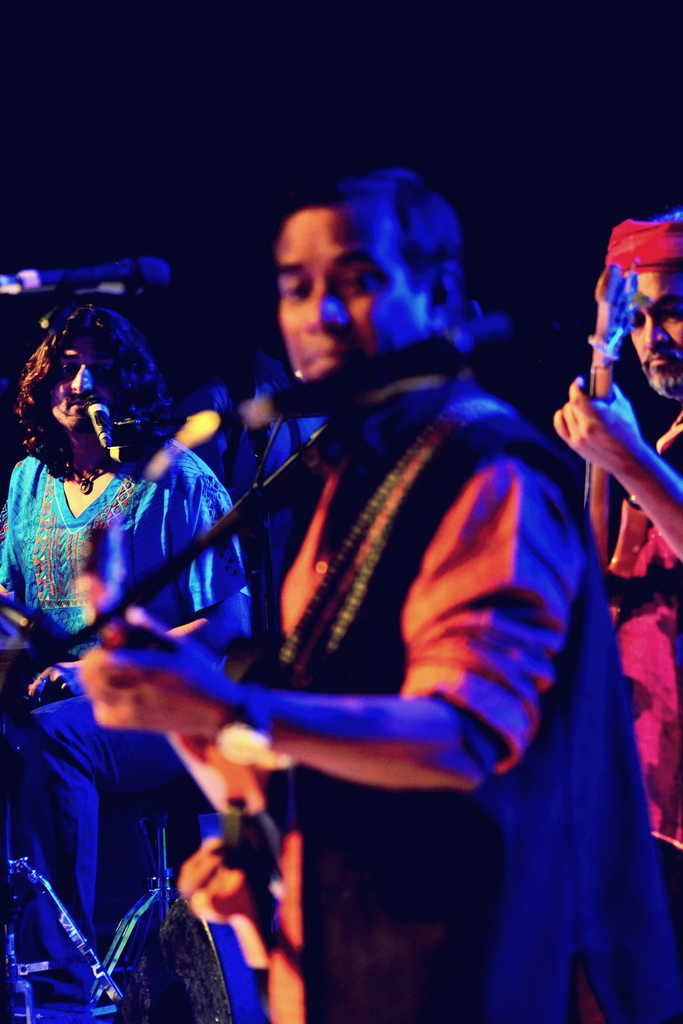 A rather exuberant fan from the land of Punjab wearing his newly bought shirt that screamed Indian Ocean was humming the Bengali lyrics and eventually came out flashing his devil horns when the ensemble played a song that talked about Lord Buddha’s journey.

Contrasting sensibilities or just defying odds? Indian Ocean’s journey, that spans more than two decades, has been about the duel between the two with latter being the worthy champion. Starting off at a time with a dearth of ears for “band music” leave alone semi-classical instrumentals, Indian Ocean has come a long way from defying the gravest of odds to be the cornerstone of India’s indigenous independent artistes.

In heart of upscale Gurgaon at Club Zygo, the band made their fans wait for long to take the stage. And when they did eventually, one “not-so-political” fan yelled in a desperate exhortation, “Dikha do ki abbhi Jawaan ho.” Tuhin Chakravarty- the Tabla player, with plenty of age on his side, was the unarguably the first one to retort back, “Jawaan toh hain yaar”, while Susmit just wore a childish grin that barely deserted his countenance throughout the show and others just followed the suit.

Dodgy stage sound and feedback were the price they paid for the late start as they hurriedly started off with ‘Khajuraho’. A long thirst of good music when quenched with a song having unmatched lyrics, it’s often worth the wait. ‘Darte Ho’ was the next and is a song of varied emotions. Powerful vocals of Himanshu Joshi and reverberating bass lines of Rahul Ram sets a darker tone, while Susmit’s wonderful work on the guitar, Amit’s harmonies and the brilliant lyrics serves inspiration.

The crowd were still shuffling with their martinis, and requests started flowing in with the shouts of ‘Jhini’ and ‘Bhor’. They didn’t dampen the spirits and ‘Jhini’ was aptly chosen. A song that pivots around the vocals of Asheem- the band’s late vocalist cum percussionist and better known as “the man with a golden voice” – that might have been rendered unimaginable without his presence for an Indian Ocean loyalist. But Himanshu Joshi dispels any biases and churns out a heart-touching rendition of the song that neither evokes a strong response in an Asheem fan nor makes him miss much. The biggest feat Himanshu manages is to make the song sound like a “Himanshu Joshi song” and not an Asheem one.

Meanwhile the bass’ string came undone but music went on undeterred, as Amit broke into an impromptu drum solo. Tuhin joined in and so did Susmit with his adept strumming. After putting the pieces together, Rahul’s bass was the latest entrant to the jamming session that suddenly started taking the shape of ‘Bol Weevil’. If that was an impromptu or pre-planned, the band’s chemistry on the stage refuses to reveal. The resonating bass riff forms the backbone of this song and along with melodic semi-classical scales on guitar; this one’s a true masterpiece. Tuhin, though was in no mood to be left out as he took the centerstage to much surprise and immediately stole the limelight with terrific jugalbandis. First, with the audience and then stunned everybody with his tapping on Rahul’s bass. In a reminder or maybe a tribute to Asheem’s exploits on the bass in a concert many years back- a video still available on YouTube- he had cast a spell on the crowd as everyone stood in a state of shock, awe and disbelief.

As the evening stretched, their improvisations went from terrific to stupendous to fantabulous, they belted out their beloved songs- ‘Nyam Myo Ho’, ‘Chand’, ‘Bula Raha’, while Himanshu Joshi’s Bengali accent barely slipped in ‘Bondhu’.

The clock struck midnight and Amit Kilam took out his gabgubi. Gab..what? An instrument with its roots in the Bauls of Bengal has long been patronised by the man during the course of years. Not only does he use it as percussion, he does a gabgubi solo too in ‘Maa Rewa’ – unprecedented even amongst the bauls. Amit is a multitalented and never constrains himself to his energetic drumming and percussions. Be it the harmonies, the gabgubi or the clarinet, he does it all. The next song had a rather sombre and solemn start with Amit’s clarinet that set up the mood for the most Grand of the Finales- ‘Kandisa’. Susmit’s guitar solo, that’s only heard in their live performances is a class act and distinctly different from the one on the record.

As the night drew close, Indian Ocean might have ebbed away from the stage, but did the music? The thunderous bass riffs, invigorating and energetic percussions, the fluid guitar lines with a touch of Hindustani classical music, the powerful vocals echoes aloud in one’s head long after the amplifiers were plugged out. This is a kind of music without any ephemeral shelf-life. It’s just timeless and perpetual. Jazz, Rock, Blues, Fusion, Sufi, Classical or Folk- it encompasses everything including sheer amount of honesty in it. If at all one were to describe music that’s “organic, deep rooted to Indian ethos and ingeniously indigenous”, this is it!