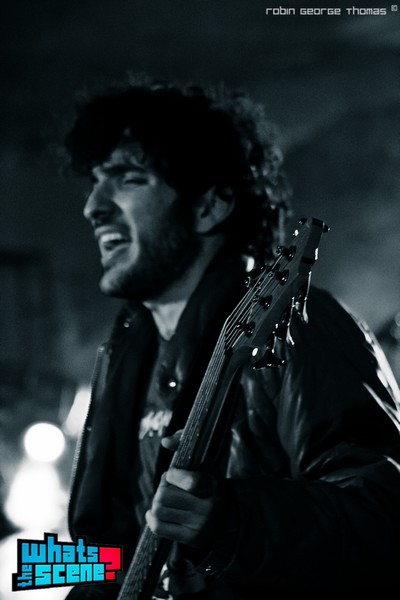 An eclectic mix of almost every genre imaginable, The Family Cheese was an interesting and enjoyable start to the weekend. At Bflat on Friday night, they played Psychedelic Rock, Progressive Rock, Blues, Funk, Gangsta’ Rap, Electronica and Brazilian Bossa nova! They even let loose a riveting Pink Floyd cover!

We entered the venue just as the band was setting up. There was some classic jazz on the speakers which instantly induced a positive vibe. As the drums were being set up, Homi started playing the groove of the background track flawlessly. This was a small initial dose of the band’s technical prowess. They soon progressed into a sound check which was a jazzy jam. Each member fed off the others’ energy and it was clear that they were proficient and capable.

The band consists of Apurv Frank Vedantam “Lala” Isaac on Lead guitars and Vocals, Homi Rustamji on Bass and Yohan Marshall on Drums and Vocals. They are all students of the Swarnabhoomi Academy of Music, Chennai. They introduced themselves (and each other) with loads of jokes and teasing. It was obvious that their egos aren’t as immense as their musical training. Also, after every song, Yohan kept repeating the line “We are the Family Cheese and we absolutely love that breakfast!“, which was funny at first but seemed a little strange after a few songs.

They then began their set with an original which gave off slight alternative rock vibes. Lala proved himself to be a competent singer with Yohan effectively backing him up. The solo was a tad too reminiscent of ‘Comfortably Numb‘ and Lala’s delay-heavy guitar tone embellished this similarity. At the end of the song, Yohan quipped sarcastically that the energy in the crowd was too much to take, once again dishing out their brand of humour.

They then started playing a Brazilian bossa nova tune ‘Black Orpheus‘ and we were left speechless for a minute. It did look like things were going to get serious when Yohan pulled out brushes and soft sticks. Their ability to play jazz was really impressive. The phrasings were sublime and really well constructed. Homi played his six string bass wonderfully and perfectly complemented the guitar. The walking bassline seemed to jog in the middle and eventually even ran! Yohan played a very intense drum solo in the middle of the song and blew the crowd’s mind. Along with the intense precision and technicality, one could also hear a lot of konokkal within his phrasings. He is an insanely talented individual and a force to be reckoned with on the drums.

They then played an original titled ‘Stories of the places you’ve never been‘ which was a progressive rock/metal song. Lala shone through on lead guitar. The crowd lapped up his licks and solos. Lala seems to be most at home with progressive rock/metal and played face melting solos and demented arpeggios effortlessly.

The band then went into total ‘mess around’ mode with Yohan leading their whimsical experimentation for the night, on a ‘Sit on your bum groove‘, as Homi described it. The playfulness began with Yohan singing ‘Toothpaste baby’ or ‘Two-piece baby’ over some blues. The band then started a rap song with Yohan rapping in Gujarati about how his mom wouldn’t let him drink daaru or bring chokris into his room! Lala also joined in and they covered Afroman’s ‘Colt 45′ with Yohan using his cymbal hits to censor obscenities. It was clear that they wanted to have as much fun on stage as they possibly could.

They then played an original called ‘UNIR’ which was again a progressive number. This was followed by a heavy cover of the blues classic ‘Hoochie Coochie Man’ with Yohan on vocals. They played a decent rendition of the song. It was Lala’s birthday the next day and the band got one of their friends to smear cake on his face during the middle of the song. This was another example of how open and easy-going the band was. They had already impressed the crowd with their technicality and now proceeded to have as much fun as possible.

They then launched into a medley of famous tunes like the Simpsons and Mario theme songs, followed by some very off-time signature jams. Next up, ‘Blue and pissed off’ was an original blues song but played in a very progressive and experimental light. The highlight of the song was Homi’s bass solo. By now Lala was tired of the cake on his face and took a break to clean himself up. Homi and Yohan launched into an electronic drum & bass jam which was a little too experimental and didn’t really go down too well with the crowd.

Lala returned and the band played one of their best known originals ‘The Cheese’ which Yohan proclaimed was “Homi’s song”. Why it was called that was obvious the second the riff started. Homi played tapping riffs with both fingers and created a complex interplay with the guitar on a 9/8 time signature. There were complex interludes and psychedelic portions with myriad effects which felt and sounded like an acid trip.

The band ended their set with a rendition of Pink Floyd’s ‘Comfortably Numb’. The dual vocals of Yohan and Lala more than did justice to this famous albeit overplayed classic. Lala’s sometimes overly heavy and Gilmour inspired tone and style seemed to finally get some relevance in the solo. He was totally in control and walked out into the crowd and even got a member of the audience to pluck his guitar for him.

Overall, the evening was very entertaining. It was heartening to see talented musicians having so much fun on stage. The Family Cheese is a funny quirky band, technically proficient and easy going. Although their jokes and banter were humorous, it did get a tad excessive towards the end, but considering the vibe of the place and the fact that they had mainly their friends and family present, it can be understood. The band did spark our interest and it would be interesting to see what they can do with a bigger audience and a more structured setlist.