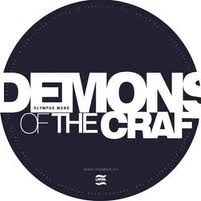 Demons of the Craft are a two piece experimental band who have cut their first EP Olympus Mons which is available for free on the band’s page. It is a largely unknown band making experimental music of the extreme kind. Listening to their new EP gave me the impression that they tend to delve into the areas of music which is: firstly, unvisited by mainstream audience (your usual Metallica and John Mayer listening folks) and secondly, followed by a rare set of people that are probably into bands like The 3rd and the Mortal and Devil Doll.

The aspect of them being a rare experimental band that are more underground than your great-great grandmother’s final remains is what is appealing. They’ve made music that has ‘I do not care if you like it or not’ stamped all over it. Truth is, if you are one of those average listeners you’ll probably never return to them again if you are listening to them in the first place. But the fact, I think is, they probably don’t care.

The first song on the EP starts off with a tune which sounds like a second grader’s attempt at ‘Guitar Hero‘, however, it matures as it proceeds into a song that covers three moods which the band have named: Arabia Terra, Noctis Labyrinthus and Olympus Mons. Along the way you can sense Carnatic touch to it. After experimenting thoroughly on the keys, sequencers and drums for nearly ten minutes, the song gives way to ‘Back to the Stars’. It begins with down tempo notes which sound like they are being produced on FruityLoops. It proceeds trying to be an experimental/atmospheric track; however, it remains just another track. Like a filler.

The final track is an untitled number which is filled with various incoherently mixed sounds with guitar melodies interspersed throughout. It ends dragging the main melody of the song, created again, seemingly, on electronic equipments.

What I liked about the band is they are experimental and they tend to not hesitate making the kind of music that is rarely made. Forget selling an album. This is not to make money. This is purely for the sake of satisfying your senses, especially the senses of the band members. What I disliked is, it is an under-produced, lacklustre EP except for some rare moments in the initial and final tracks.