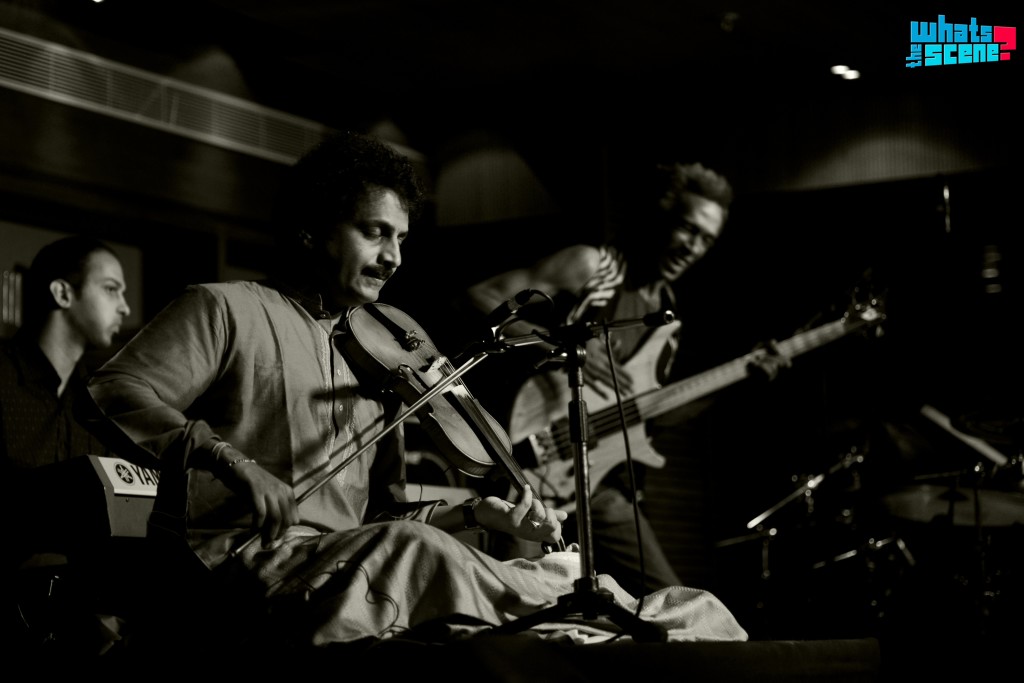 Rohan Arthur is a Photographer + Writer at What's the Scene who enjoys all music that does not involve growling/vomiting into the microphone. Rohan is the vocalist of a blues rock band and also manages another folk rock band. At every given chance, he runs away to the jungles, which he believes are his home.

The Fireflies All-night Festival of Music 2011 was a well promoted event, and the crowd that thronged at the venue was testament to this fact. The lucky ones (us included) managed to park their cars a meager one kilometer away from the hill where the amphitheater was located, and plodded through the small village to the ticket counter that was rather well lit by a 0.5 watt bulb. Stamped and shoved, we found ourselves in a stand of trees that interspersed people passed out everywhere. The night was young, and people had already seemed to have crossed the limits, turned back, and crossed the limits again. We clambered for space at the top edge of the amphitheater and just about managed to view the proceedings on stage, courtesy the juice-leaking trees which had set root in the most non-optimal places thereby giving us a not so vivid picture of the bands from this distance.

We had borne the brunt of the tightly packed audience in the amphitheater, and had resolved to see this through the night. The Bicycle Days were in the middle of their set, but way off course as far their performance was concerned. The most noticeable aspect about their music at this show was their genuine attempt at belting out a different sound. Kudos to them for that, but the final execution of it all was disappointing. The vocals were off key and barely audible, the bass was overpowering everything else, and the samples used to render the psychedelic twist to their sound oscillated between perfect to downright annoying. The ambience-creation was excellent, but this was undone by what seemed like quacking ducks. The drumming was very tight and helped keep the band’s music rooted in a place where the average listener could connect with the band’s sound. In the end, it was refreshing to hear a different sound like theirs and one feels that they still have a way to go before making their music likeable, even to non discerning listeners.

While the next band that set up was Spinifex (Dr. Mysore Manjunath and the brass section from the Netherlands), the crowd shuffled around and we managed to get a little more comfortable as far seating and consumables were concerned. Spinifex’s performance was a technical orgy. Dr. Mysore Manjunath’s ability to make the crowd roar every time he started shredding the violin was phenomenal and unstaunched. The thrill he was experiencing on stage was infectious, he seemed to be feeding off of the audience’s energy, and the end result was wave after wave of crescendos and flamboyant solos on the violin, mrundangam, drums, and lastly, the brass quartet. The ensemble of trumpet, reeds, tenor Sax and tin Flute seemed highly out of place amidst the Indian ragas, yet these guys proved to be masters of their craft when they belted out number after number in a host of Indian classical pieces alongside the Mysore Brothers.

By the time Moonarra was set to play, the crowd was some 4000 strong, in a venue that was meant to accommodate about half that number. Moonarra’s set started off on a note that set the performance bar quite high. The musicianship and technical prowess displayed on guitars, bass, drums and the lap steel guitar were phenomenal and groovy. The music reeked of effortlessness; they made everything they played look so easy. Catchy tunes interspersed with Carnatic and Hindustani runs and sections worked well to provide the appreciative audience with an eclectic mix of sounds with this instrument set up. And just when it seemed that the listeners opened their arms and ears to the band’s sound, the experience was marred brutally by a vocal line that snatched defeat from the jaws of a musical victory. The singer’s attempt at pulling off a baritone pitch failed miserably. She was off key to such an extent that it ruled out all probabilities of categorizing the vocal line as jazz, or fusion, or ‘intentional’. It was bad, period. The singer’s rather unjustified confidence while belting out what appeared to be random notes obliterated any remote possibility of realization that she was off key. Suffice to say, Moonarra disappointed, considering their recently acquired popularity. The flamboyant inclusion of ‘movement specialists’ at the end of their set was salt in the wound, as the dancers were unsynchronized and drew attention away from the music. The show at Fireflies was constantly plagued by an ever increasing number of people, who, due to a lack of space at the venue, thronged behind and beside the stage, (spilling out between the amps even) and needed constant reminders to, well, get off stage. Though we tried hard to omit these from memory, it was like a bad allergy that kept coming back.

After yet another crowd dispersal message, Thermal and A Quarter blew everyone away with a pitch perfect, energy intensive, groove filled, electric performance that no one on that day will ever forget. Armed with a flautist and a saxophone player, TAAQ displayed how their songs represent a unique, catchy flavor that is ‘Bangalorean’ yet so, so, global in its appeal. Their cover of ‘Hey Jude‘ was by far the most exceptional song of the night; they show their ability to control audience response at will, and their greatness as a band was manifested on this amazing night.

Swarathma‘s colorfully dressed band members were visible through the haze and drew a fantastic crowd response while the stage was being set up. They masterfully executed a set of songs with and without a message, with the singer donning the garb of a horse and having an on-stage dialogue with the bassist, who ‘conducts’ the show with a hilarious Hindi accent! This band ensured that their presence on stage was not a one way rendition of music, but engaged with the crowd through dialogue and humor, making the overall experience a laughter-filled eye opener. They don’t bear down on the audience with a message, but elicit ‘wah wahs’ from everyone. This band has a fantastic live act one should be a part of at least once!

Dollu Kunitha, a percussion ensemble, appeared to have been added just for the sake of offering a multi-genre experience. The drummers were out of sync and the Tapaanguchi beats belted out again and again proved to be quite a bore. The fact that they made man-pyramids was unimpressive; gymnastics during live music does not make bad music good. Added to this, the team ventured through the crowd towards the exit and continued to thrill those in a drunken stupor behind the amphitheater while something more relevant to music was happening on the stage.

Something Relevant‘s set up was plagued by ceaseless Tapaanguchi front-stage. The band oozed freshness with the most apparent thing at this point in time: their apparel. Their start overlapped with Dollu Kunitha’s drumming behind the amphitheater, and the polyrhythmic mania created was terrible. One band at a time, please! When a band finishes it’s set up, its only basic courtesy to hear them play, without having to worry about why the organizers refused to (or later, did they?) get the previous band to stop playing! After the initial confusion died down, STR demonstrated some exceptional music. The saxophone proved to be the instrument of the night, taking the count to three bands with a sax this night. Amidst girls going wild over the singer, we were able to hear some funny lyrics being sung out, mixed with some really cool percussion and saxophone parts. Their music is groovy, fun filled and induces happiness and it’s as simple as that. These guys are a breath of fresh air in the music scene.

In the end, the atmosphere at Fireflies was palpable, the musical experience was fantastic, and the revelry was symbolic of Bangalore’s desire and love for live music and other such addictive notions. Quite the life experience, one might say. B’bye Woodstock, hello Fireflies!

Sidharth Mohan is the founder of Whats The Scene and a biophysicist. A musician in his own right, he started WTS while still a part of a local band in Bangalore. When not working with gloves and a lab coat, he spends his time travelling, swimming and jamming.