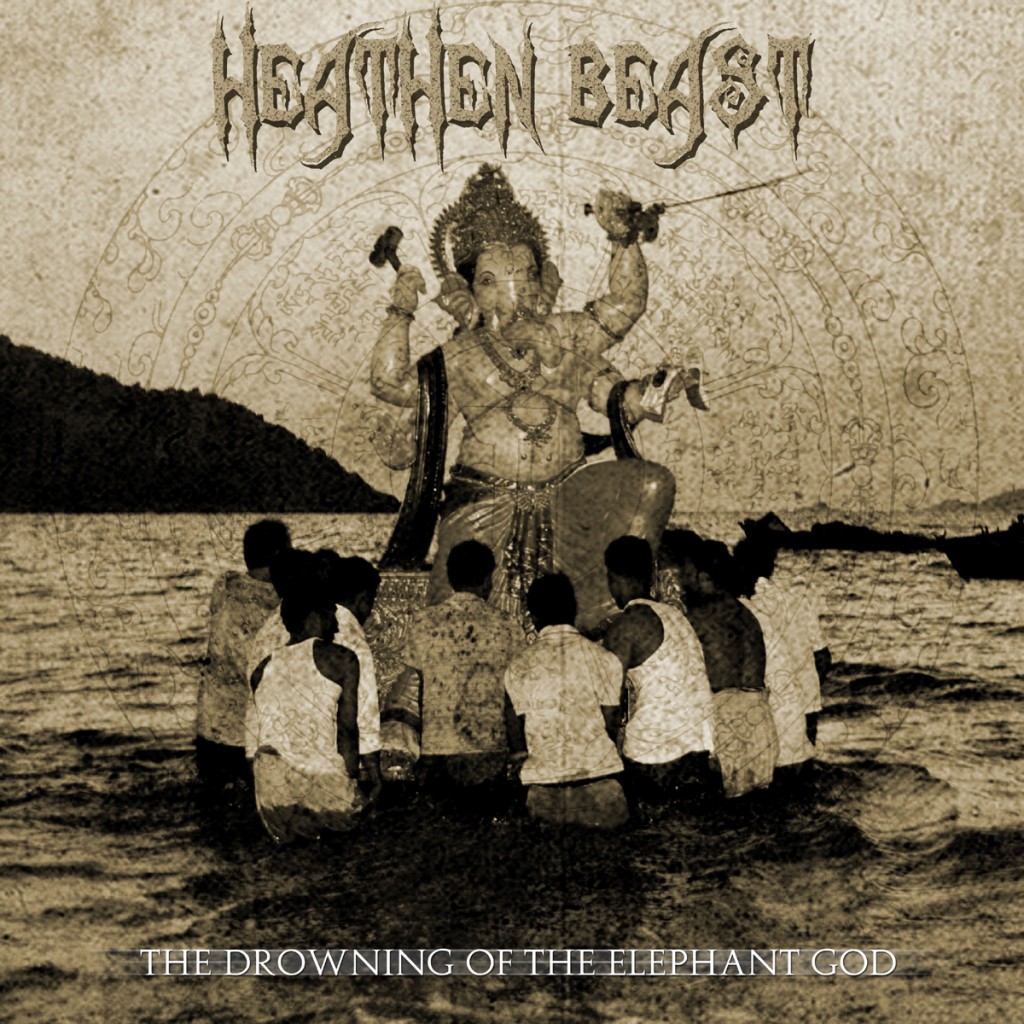 Back in November 2010, a mysterious Black force called Heathen Beast had dropped a sonic bomb on unsuspecting masses. The first EP Ayodhya Burns was well-received and the title track happens to be one of my favorites  The secretive trio from Mumbai, who go by the monikers Carvaka (vocals/guitars), Samkhya (bass) and Mimamsa (drums), profess to be atheists and claim to deal with subjects relevant to India and its culture, rather than choosing to focus on the typical anti-Christ or Satanic themes prevalent in Black Metal. Now, a year-and-half later, they have returned with their second EP titled The Drowning of the Elephant God.

Similar to Ayodhya Burns, the 2nd EP also contains three songs. But, while the debut album dealt with religious zealots warring amongst themselves, Drowning of the Elephant God laments the harm that the devotees cause to nature in the name of religion. One aspect where the new EP differs from the previous one is the use of Indian instruments like tabla and mridanga throughout the album, which is a breath of fresh air in what, otherwise, would’ve been a rehashing of the same old ideas. While the use of indigenous instruments works in the first two songs, it feels forced in the last song, ‘Bakras For Slaughter.’

Bands incorporating new ideas, experimenting and progressing further from their previous material are always welcome. There seems to have been a conscious effort to add atmosphere which also was missing in the previous album. It is very evident in my favourite track of the EP, ‘Contaminating The Ganges’, the subject matter of which is pretty self-explanatory. Soft chirping of birds in the background and the mellow guitar plucking accompanied by restrained tabla beats occupy the better portion of the first two minutes of the track, before blasting forth at scorching speeds underlined by some tasty guitar leads.

The enigmatic trio has its Black Metal chops thoroughly honed which is unmistakable in the spine-chilling, harsh shrieking of “Ganapati Bappa Moraya” at the starting of the title track or the frantic riffs at the ending of the title track. The transition from hyperspeed, blast-beats driven runaway black metal rocket to a more sedate pace suitable enough for tablas is more expertly handled in ‘Drowning of the Elephant God’ than in the other two songs.

While the subject matter dealt with in the EP is admirable and important – no harmful action is done with as much impunity and arrogance as those with religious sanction – there are moments when the lyrics feel preachy. I want my black metal to be diabolic and sinister, the elements of which are largely missing in Heathen Beast’s new material. Also, similar to the first EP, the vocals are sometimes indistinguishable, particularly during the chorus part of ‘Contaminating The Ganges’.

After giving the album several listens in the past week, I believe that their debut EP Ayodhya Burns was a better album than Drowning of the Elephant God. I felt that the ferociousness and raw anger present in the first album was somehow lacking in the new EP. However, that can be attributed to personal mindset and incorrect expectations from the album, since by itself Drowning of the Elephant God is a mighty fine effort and should serve as a worthy addition to Heathen Beast’s catalogue. Black metal fans should definitely be checking them out when it will be officially released.