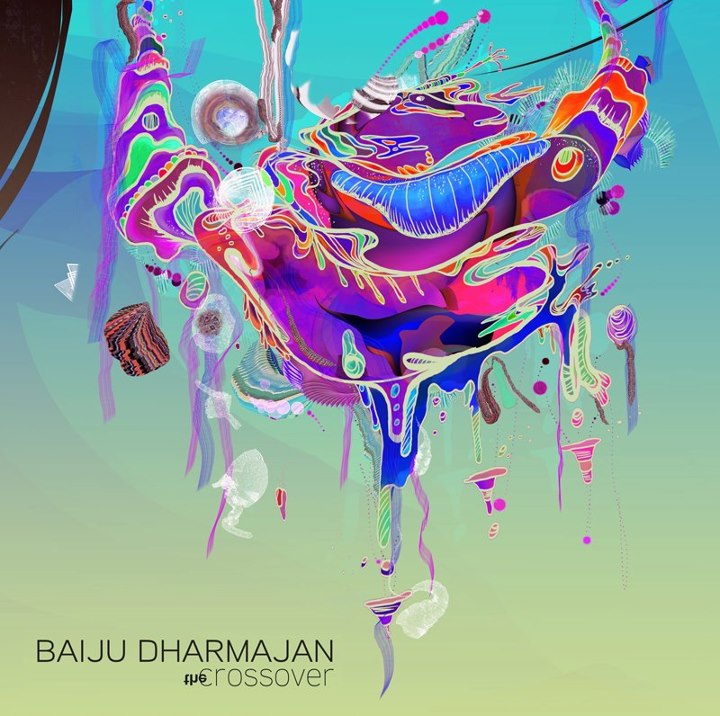 After listening to Motherjane’s Maktub, I was really looking forward to and all geared up for Baiju’s solo album. Baiju Dharmajan’s first solo album contains six fresh instrumental pieces in a sonic setting quite different from the darker Motherjane palettes. With a catchpenny price on the tag, the album is a steal, given the rich quality of content Baiju offers in this album. The whole album’s got a laid back, feel good approach yet not lacking in mean guitar riffs.

Crossover opens up with a very Steve Vai-Steve Morse-ish jam track Demented. Baiju throws in killer Carnatic riffs right from the start on this album and there is some very accessible riffing and infectious guitar playing. The rhythms section could have been more interesting with live drums. The soloing is very fluid, bluesy yet freak-outish.

The album takes a shift from Saturn-orbiting stuff to breezy biking on seaside highways of Kerala with the next track Alchemy. On this rhythmically complex track in 7/8 time, Baiju goes to his Ilayaraaja roots clearly. With the Tubescreamer on full, the tone is killer and at times throaty, reminding one of the Blow by Blow and Wired sounds of Jeff Beck.

Halo, the third track continues on this breezy outlook with more of the backwaters and china nets atmospheres. With apt circular riffing and a raga-base (closely resembles Hamsadhwani at places), Halo is a jocular trip, which is well contrasted by the next track Cyber Reptile.

Cyber Reptile is one to plug in and go on an ego trip through the cubicles of your office to the coffee kiosk downstairs. As in many songs on the album, the riff is very cyclical turning in circles, with a recurrent theme. The rhythm section is very similar to the electronica albums of Beck and Satriani (Jeff by Beck, 2003 and Engines of Creation by Satch, 2000). The solo has those contextually apt and fantastic breaks of slide-licks. The squeals and bends contribute to the overall futuristic sound scapes amidst the effervescent Carnatic riffing.

Philia is a soulful ballad – hitting the brakes after bucket-loads of riffing and heavy patterns. It is also set in a complex time signature of 5/4 but in a more self-reflective mood, with textures in the style of traditional Carnatic composers. Philia is certain to be the sunset song for many!

The album closes out with the wah-wah heavy, yet softer in overall texture Landscapes which doesn’t feature the flashy guitar playing, but with effects galore paints a picture of fascination that an urban yuppie would get while travelling across the greens of the paddy fields and the clear blue sky somewhere in interior South India.

Overall, there are eclectic soundscapes reminiscent of Asimovian space-fiction, coconut trees, backwaters of Cochin and office cubicles. Instrumental rock in India starts here for me. And surely more Satriani and Vai like sounds can be expected from the “God of Small Strings” Baiju Dharmajan.

Bone of Contention: Carnatic rock is a term used constantly to describe Motherjane’s and more specifically Baiju Dharmajan’s music. For something to be called ‘Carnatic rock’ we need raagas, gamakas and the usual rock components of riffs, power chords and blues licks. The quintessential recording that emphasizes all these aspects of ‘Carnatic rock’ remains ‘Electric Ganesha Land’ by Prasanna (2006). In my opinion,Crossover may not classify as Carnatic rock, but it does set a mood for things to come that may tend more towards it, but at the moment we could term it ‘Desi-Rock’, ‘Native-rock’, ‘roots-rock’ or some other word that hazily captures music set in indigenous environments.