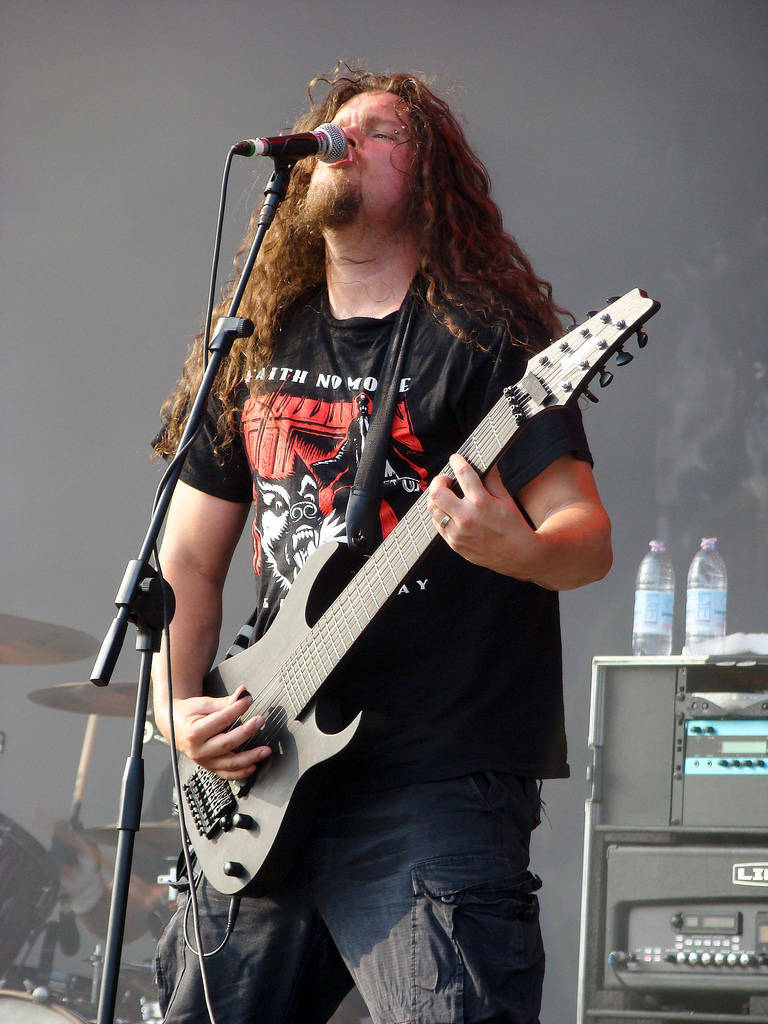 WTS: Good afternoon! So how has the travel been so far?

Hagstrom: Travel from Pune to here was extremely tiring. We were on an early flight. We haven’t slept much, but it’s all good.

WTS: How was the response from the crowd in Pune?

Hagstrom: It was really good. I mean, since we haven’t been here before we don’t know what to compare it to but for us it was a good experience. Like, it was the first show and people turned up so it was really good.

Hagstrom: Yeah. All the crazy shit!

WTS: Did you get a chance to catch any of the local bands?

Hagstrom: Actually, no. The reason for it is like I said we have travelled for 24 hours to get here. So we had to catch the hours so we could sleep. Unfortunately we arrived at the stage like few minutes before the show so we caught a couple of songs by Enslaved.

Hagstrom: I’d really like to answer that question but honestly I can’t. When you are in a band, or at least in our band, what happens is that we are just a bunch of fu**ed-up guys who want to have fun with music. That’s how it started out and that’s the way it’s been since. So why an album turns out a certain way, we never sit down and think we need to do this or we should do that. We just, you know, when the ideas come we build on that and it turns into an album. So I guess it’s just a fingerprint of what we are going through at the time.

As for Catch-33, it is one of those things where we’ve been discussing doing that type of project. We never thought we’d get around with it but for that album we thought, okay now is that time. So it’s kind of a natural process. What happens on one album is dictated by what we have done on our albums before. Because we made Catch-33 that made it feel fresh to go back and use regular songs. What we do with the sound we have now is to bring in a little bit of tweak into the old style and create something new. So if we tried that when we were doing Catch-33 it probably wouldn’t have turned into the album it is. You know, we go back and forth a little bit (laughs). Having said that I don’t have a clue what the next album’s gonna sound like even thought we are writing it now.

WTS: When’s the next album going to come out?

Hagstrom: I don’t know, next year probably. We are hoping September/October, maybe.

Hagstrom: Personally, albums are fingerprints of the work you’ve been doing. There was something about the albums we made at the time which makes you feel “Oh this album is cool in this way and this album sucks in this way”, so, you know, it’s different. I like certain parts of certain albums. For us I’d say that Catch-33 was the most gratifying album to make because it was something very different and it was an idea we had for a very long time. It was one of those things, you know, like a white sheet of paper and you do whatever you want to. Because there were no rules! It was like start here and stop there. That was liberating and we had a lot of fun making that album.

If I had to pick one, I’d pick that one (Catch-33). But then again, albums are very different and it’s hard to choose just one because I like ObZen a lot for certain aspects of it. Catch-33 is such a monumental project because it’s just one track and we weren’t exactly sure how to pull it off. So when it came out it looked as close to our vision as possible. That’s a good feeling when you are done with an album.

Hagstrom: It’s pointless to describe it. ‘Cause we’ve been called a lot. Like Swedish Death Metal, Math Metal, you know, and I guess every band gets that. But for us it is Experimental Metal. We’ve been Black Metal from Norway too according to the media (laughs). It’s tricky, because you do your stuff and in the end it’s just Metal, you know.

WTS: Speaking of genres, Motorhead call themselves a rock n’ roll band. They do not agree with the media classification of them as a Speed Metal or for that matter any metal band.

Hagstrom: Um hmmm… I understand that. Because in terms of what you do as a musician that (genre classification) should be the least important aspect of what you do. You do your music and then people listen to it and they say different stuff about it. That’s fine. That’s awesome. For us we never thought what kind of music we play. We play Meshuggah Metal. I mean, that’s what we do. There’s no use thinking about it. One point of time, in the US, there was a lot of talk about that Math Metal thing. They said, “You are the pioneers of Math Metal.” We cannot possibly be the pioneers of a genre we don’t even know what it means. I don’t even know what it is. So that’s probably not true.

WTS: Are you guys into Math at all?

WTS: Maybe you get this a lot but how do you achieve those time signatures and beats?

Hagstrom: We don’t achieve anything. It’s just 4/4 time signature all the time. Throughout the career of Meshuggah, there’s been polyrythmics and stuff, but through a theoretical standpoint if you could break it down (the song) what happens is the song starts and we’ve got 4/4 beat (claps to 4/4 beat) just like AC/DC, nothing more but we mess around with it. But the riffs revolve around 4/4. It’s rare that we create odd time signatures. It happens once in a while but 95% of Meshuggah songs are 4/4. People go, “It’s not, because you do this and that”. It’s not.

WTS: Where do your lyrical and musical inspirations/influences originate?

Hagstrom: When we were kids, when we started as a band we were very much influenced by the bay-area thrash scene. We were influenced by bands like Rush. As we evolved as a band the inspiration may have been less from other types of music and more from a movie or, you know, stuff that happens in your life. We also feed off each other a lot. When we start to write a song, we start to throw ideas at each other and that’s when the creative process flows.

But there’s a difference between influences and inspirations, in my opinion. In “influence” we actually hear (other bands) and try to achieve something, and you are not trying to copy something ’cause there’s a lot of band copying out there. Influence is when you hear, “Oh! This guy here wrote this song. You got to listen to his band.” And if you are “inspired” by something you don’t have to emulate anything about what you are doing. You might be inspired by a writer who has got nothing to do with music or art but the way he’s doing his thing so convincingly that it becomes unique. That is something that attracts the band. Pantera had their own music. They had their own style. But they have already done it. We try to create our own unique music. Our own sounds which people instantly recognize with us even if it’s not successful.

WTS: What are the plans after the tour?

Hagstrom: Sleeping! For a week.

WTS: Isn’t it snowing heavily back in Sweden?

Hagstrom: I talked to my wife, it’s 20 Celsius below in Sweden. A lot of snow. It’s normal winter. It’s cold and it’s very different from here. But like I said we’ve slowly started writing an album, so we’ll just take some time off during Christmas holidays, spend time with our families then come January we are diving right into the writing process. The writing process is one of those things which might be quick, which might be slow. So we don’t know yet. Then we are gonna do some shows probably in March in Scandinavia, you know, shift focus from the writing process and then go back again (to recording). When the album’s completed and out for mixing we are gonna play some summer festivals across Europe.

WTS: What are your expectations from the Bangalore crowd tonight?

Hagstrom: I don’t know. We really had a good time last night. We hope it’s gonna be the same here. Like I said, first time in new territory you never know. There might be just 300 people here or more.

WTS: One last thing. Tell us about that 8-string crazy insane beast that you guys carry.

Hagstrom: It’s an Ibanez custom-made and to cut the story short, it started out when we wanted something new in our sound. We were experimenting with tuning down and tweaking the regular guitar then there was this guy who suggested, “Have you thought about an 8-string guitar?” The thought had crossed our mind but it didn’t seem right. He had one, that he’d prototyped. We tried it out and that really made the difference in the sound since the Nothing, I album. It made a huge impact on how we made the guitar sound. It is pretty much like you said “a beast” but on the other hand they are really well built guitars and work out just fine. They help us tremendously in teams of inspiration. The instrumental part sound just great and we could do shit just like we want to. The creativity just flows out.