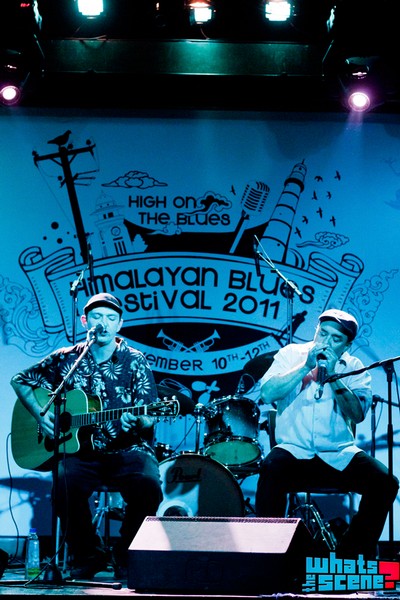 It was a Friday evening and the roads were wet and slippery after the incessant rain. I was exhausted after an arduous journey all the way from Electronic City to Whitefield but happy that I made it half an hour before The Himalayan Blues gig began. I was really excited and was looking forward to a bluesy night with not one but three remarkable bands. I armed myself with a notebook, a pen, a glass of whisky and a pack of cigarettes before I settled down at the table right at the centre of the long corridor where candle-lit tables were beautifully laid out.

The first band on stage, The Hudugaas, had completed their sound check and were about to start playing. The first thing you’d notice about The Hudugaas is the guitar sound. It was loud, crunchy, very raw and, very bluesy – the perfect sound for a blues band. The sound was achieved by connecting a Fender Strat directly to a Marshall amp and fiddling with the sound controls. The rhythm section, handled by Vinoo Matthew (Bass) and Deepak Raghu (Drums), was groovy and provided a solid foundation for the band. Most of the soloing was done with a harmonica which blended in quite beautifully with the blues setting. However, if you had come to witness a blues guitar ceaselessly wailing away, you would have to wait a while. The lone guitar solo on ‘Sinister Purpose’ was very ordinary and the notes were not clear in certain sections.

The band succeeded in drawing the reluctant crowd onto the open area between the tables and the stage. I suddenly realized that my feet were subconsciously swinging to the rhythm. The band’s set comprised entirely of covers and they kicked off the proceedings with ‘Goin’ Down Slow’, a song popularized by The Howlin’ Wolf. The vocals on the second song ‘Key to the Highway’ – a Charlie Segar song popularized by BB King, were particularly impressive. The set was completed in half an hour with a couple of blues favourites such as ‘Hoochie Coochie Man’ and ‘Pride and Joy’.

Next up was Izzy and Chris – a band from West Virginia that is heavily influenced by the country music scene there. They are a very laid back duo with Izzy handling the guitars and vocals and Chris playing the mouth organ. The entire solo section was handled by Chris. Their set easily blended in with the cool evening air and got a lukewarm response from the crowd. The first things you’d notice about the band would be the dexterous flamenco style strumming, the strong vocals and the beautiful harmonica work. They played multiple songs from Izzy’s record Preachin’ The Blues Vol 1. There was a lot of raw emotion in his voice which was very touching at times. However, I must say it got a little too monotonous towards the end because an hour long set with broken guitar strings, irksome guitar tuning on stage and an energy-sapped performance is simply too bothersome to digest even for the most devoted Blues fan.

Last on stage was The Jimi Hocking’s Blues Machine. This is definitely one of the best blues bands I have seen on stage. Jimi was flawless with the guitar and had an incredible voice. Karl’s bass lines were irresistibly groovy and Greme’s drumming was simple yet effective. The crowd obviously loved these guys as this was certainly a great change of mood. The whole place suddenly came alive with excitement. Jimi’s song, ‘I Think I Can’ about the blues train in Melbourne, was a peppy number which effectively showcased his showmanship. Their set was a right mix of own compositions and covers, covers which were tweaked a bit to give them a great flavour. Jimi is a great performer who interacts with his audience a lot and ensures they’re having a great time. He doesn’t fail to display his dexterous guitaring skills by playing the guitar behind his neck and under his legs – an immensely popular Jimi Hendrix stunt. The covers played included John Mayall’s Bluesbreakers’ ‘All Your Love’ and Hendrix’s ‘Hey Joe’. On the whole, this band was tight, played well-orchestrated numbers and had extremely powerful stage presence. Jimi Hocking was definitely the fix for a blues guitar junkie yearning to hear a blues guitar ceaselessly wailing away to an irresistible groove.

On the whole, the experience was fantastic and the sound on the PAs was incredible. The bands put up a great show and the crowd had a wonderful time which was very obvious because by the end of the show, almost everybody was standing and shouting out for encores.