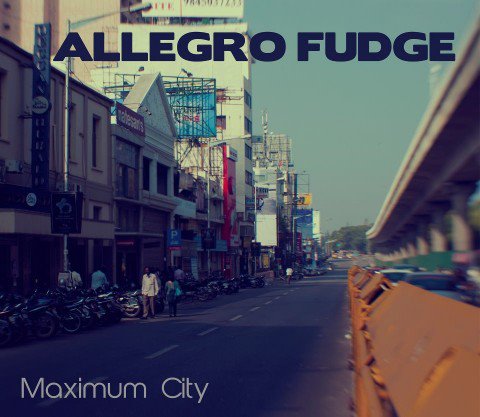 Allegro Fudge is a Bangalore-based band whose name subtly refers to the kind of music they make –Allegro is an Italian term for a lively, upbeat piece of music, so Allegro Fudge could quite literally mean a mash-up of many sounds and effects whose end result is quite upbeat and uplifting.  Their music ranges from blues to rock, pop to folk and even Celtic, which makes their music quite unclassifiable.

Allegro Fudge sounds nothing like its idols or contemporaries, which makes the band standout a head above their competition. The band members themselves hesitate from classifying their sound and claim to make music that inspires them without worrying about genres. In the Indian music scene which is choked with metal bands and flamboyant music, Allegro Fudge comes as a breath of fresh air with its soulful acoustic tracks.

Their unique sound has garnered them much international acclaim – their songs have been listed in Broadjam.coms Top 10 Contemporary Folk and Top 10 Asia lists and they were also finalists at the TFA awards. The band was founded in 2007 by keyboardist Jason Zachariah and Joey Sharma and along the way their line-up has changed quite a few times. The band currently consists of Saahas Patil on vocals, Jason Zachariah on keys, Shalini Mohan on bass and Anish Nadh on guitar.

Their much awaited debut album called Maximum City is a celebration of everyday life. They confess that they were inspired by their immediate surroundings (and Bangalore- the city they call home) and as a result, they had to often record songs and melodies on their cell phones. Unlike other bands, Allegro Fudge uses the keyboard to great effect in every song with the keys often standing out as the percussion instrument. Their songs have a dominating piano riff and the bands brilliant use of vocal harmony has made their debut album a force to be reckoned with.  One can imagine listening to their songs on a rainy day, holding a mug of hot coffee, looking out at the world and feeling melancholic.  Some songs on the album are lively and upbeat without being peppy and the others are soulful and dark without being petulant and angry.

Adrift– said to be inspired by the movie The Soloist, has a great atmosphere thats created in the beginning. One of the earliest songs written by the new line-up, Adrift is a song that talks about a persons lonely journey on the way to fulfilling his dreams. This great acoustic-rock track often leads into jazz and Saahas Patils unique voice adds great depth to the lyrics.

Day Dreamer is a pop rock song which shows off the great vocal harmonies achieved by the band. This song tugs at the heartstrings of anyone who has felt alone in a big bad city. This song is a great tribute to the undying hope and dreams of the young.

Colors Fly (which won the third place for Best Pop Song at the South Asian IndieGo Music Awards 2011) sounds almost like a pop ballad. The music, complete with dramatic piano flourishes lends an optimistic flavor to the song. The energetic and dramatic ending completes the uplifting mood of this song. One piece of advice-lock yourself up in a room and dance to this song with a dupatta in hand – total Bollywood style!

Far Away is a song originally composed by the previous vocalist- Noella DSa which was later spruced up by the current members. – Beware, the music may be misguiding in the beginning but the lyrics suggest a far darker theme. The lyrics narrate the heart wrenching story of a woman trapped in an abusive relationship and her inability to escape although the music does seem quite disconnected to the lyrics.

Enchantress and the Hillbillies is the only instrumental track on this album. A great guitar dominated intro leads to a piano riff around which this track is built. This song must have been Jason Zachariahs dream to play and shows off his skills as a keyboardist to great effect. My only complaint with this track- it was too short!

Waiting is one of the country songs on the album with its unmistakable harmonica in the background, lyrics, laidback attitude and guitar solo at the end.

Hear them Say is as country as the band gets on this album with a big ol Yee haw thrown in. This track is overwhelming with its instrumental interlude, harmonica sections and guitar twanging. Personally Im not a big fan of their foray into country music.

City of Sin is a sassy, funky, jazz number – a delicious track about giving into temptation only made better by the breathtaking and mysterious interlude.  I will admit to this being one of my favourite tracks on the album.

Rock all night, as the name suggests, is the albums rock song with elements of swing and jazz thrown in.  What makes this song so interesting is the changing tempo and highly suggestive lyrics. This track borders on cabaret with its amorous lyrics, bass and vocals.

Compared to the rest of the album Eye to Eye seems pretty unremarkable save the drum solo at the end. Nonetheless it is a pretty decent track with great vocals.

Finally we come to the piece de resistance of the album- Maximum City. Only a true blue Bangalorean can feel the melancholy of this song. Inevitable change leaves only memories behind and this is a bittersweet tribute to the city we call home. Others would think that the lyrics lament about any changing big city but I would like to believe that this song is about Namma Bengaluru – in my defense, the album cover is a picture of M.G Road in Bangalore. The guitar intro sounds almost like a Sarod making this rock acoustic track is another favourite of mine.

Overall, Maximum City is an outstanding album with mature and complex lyrics and a very unique sound. I can hardly find anything to critique and my only gripe in this otherwise flawless album is the deviation towards country music. The country tracks stick out like a sore thumb in this beautiful and melodious album. This 11- track debut album promises a great future for Allegro Fudge and I wait with bated breath for the next one!

In the meantime, the band continues to release singles and covers which are available on their Reverbnation page and the videos to their songs can be found on their YouTube channel. Maximum City can be bought online via cdbaby.com but of course the best way to listen to their music is up close and personal during a live concert. 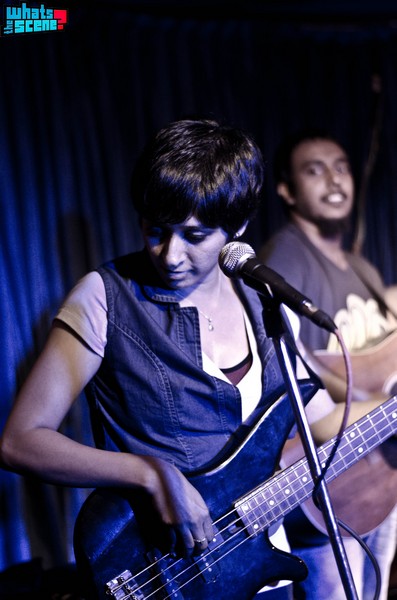 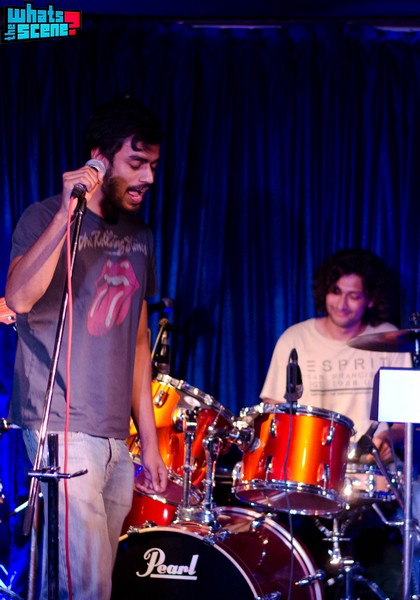 The show kicked off at 9 p.m. with ‘Hear Them Say‘, a bluesy tune that I enjoyed a lot. The song has a nice up-tempo break in between which adds some oomph to their sound. The first thing that struck me when Allegro Fudge opened their set is that they are all individually very talented musicians. The band went on to play ‘Far Away’ and ‘Yellow‘ by Coldplay. The keyboard forms an important part of their sound and is almost a lead instrument in itself. The keyboardist, Jason Zacharaiah, added a level of complexity to the sound which kept the music engaging. I really enjoyed the “blues face” he’d make when it was his time to jam out! The band followed with some more originals, ‘Colors Fly’, ‘Day Dreamer’ and ‘Waiting’. The crowd really got going by now and a few people could be seen dancing animatedly to the music. Anish’s guitar work was particularly enjoyable on the latter part of the setlist. The drummer, Kishan Balaji, also did a fantastic job throughout the set and played with a lot of feel and dynamics. 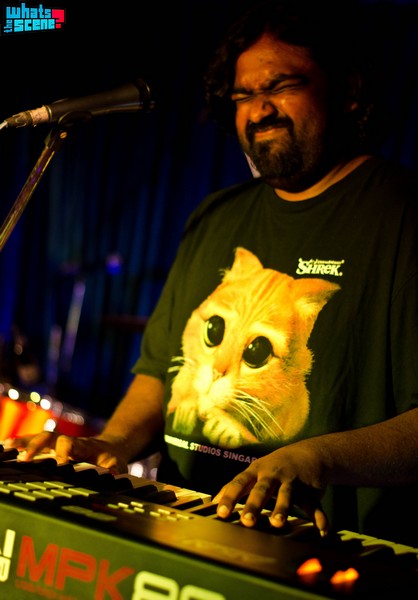 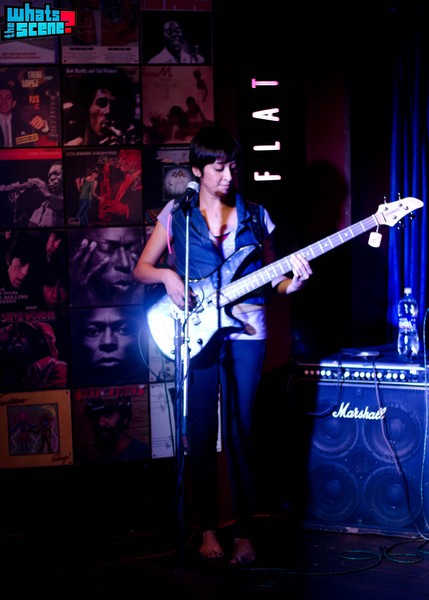