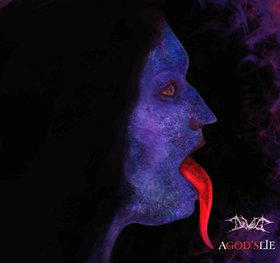 Is thrash metal dead? The genre that was most easily the ‘face’ of metal throughout the 80s and the 90s seemed like a lost art in the new century. With the most bankable names in thrash dishing out duds after duds, any metalhead worth his/her salt would say thrash is almost dead. A God’s Lie will change this perception.

The album marks the debut of six-year old Mumbai based thrash/ death metal outfit Devoid and talks about the violence of religion and the futility of it all. The album cover by Shakti Dash sums up the entire mood with illustrations that are startlingly smoky and blue with Goddess Kali in war mode. It’s dark, it’s heavy and it’s definitely not for the weak hearted.

‘A Silent Death’ makes for a brilliant opening for the album. The acoustic track sounds depressing, even suicidal and will leave you in a complete state of unpreparedness for the skull crushing riffs on the tracks that follow. ‘Battle Cry,’ right from its start of sirens wailing and gunshots to its riffs is reminiscent of the dying moments of Metallica’s ‘One.’

One of the most brilliant tracks on the album with its structuring is ‘New World Order.’ The track has parts of the goose bump inducing speech the character Howard Beale makes in the 1976 movie ‘Network’ about why people should get mad about everything wrong in the world. The title track, that comes in at the very end of the album stands out with its lyrics that slap you in your conformist faces. The other track that carves a niche for itself is ‘Black Fortress,’ a track that incidentally put Devoid into the spotlight in the Indian metal scene. ‘Possessed’ is a pure delight to hear for Shubham Kumar’s drumming. With lightning fast double bass beats, Shubham owns the track.

The bonus track, ‘Beer Song’ is an out-and-out old school thrash track that has ‘fun’ written all over it in capital letters. It’s the kind of track that would set the adrenaline pumping and lead to fractured limbs in moshpits at gigs.  Sanju Aguiar, who did a short stint as the lead guitarist for the band when their original man Keshav Kumar took a hiatus, returns to play on the bonus track, and boy is he fast!

Arun Iyer, with his raspy vocals, completely entices through the 38-odd-minute running duration of the album. Iyer’s crisp riffing provides Keshav ample opportunity to showcase why he is one of the best thrash metal lead guitarists in India. Frank Pawar, Devoid’s bassist, having played in several other bands is very seasoned to say the least, bringing his distinct touch to each track.

A God’s Lie isn’t about atheism; it’s about the flaw in religion that fails to save us from the monster that is politics. The idea is something that connects to Indians instantly and this works for Devoid. Both the band and the album are brutally honest and make no bones about it. The only issue with A God’s Lie is that the tracks lack this certain variation that would make them stand apart from each other.

A God’s Lie is that rare piece of a thrash debut whose copy you would want to preserve. Devoid is an extremely powerful band that shows promise like a pot of gold at the end of a rainbow. Thrashers around the world will agree that the album stands out not only because it’s from a Bollywood obsessed nation but because it’s genuinely world class. I’d rather listen to A God’s Lie than Slayer’s latest World Painted Blood, any day. Enough said!