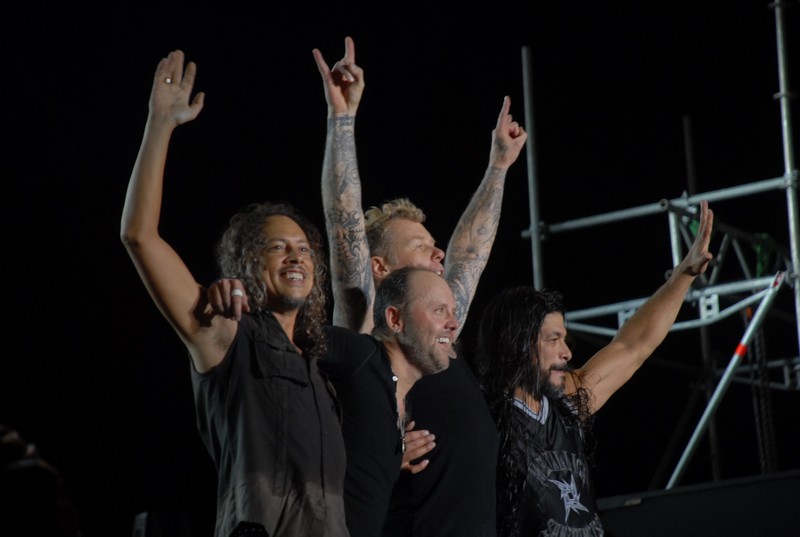 It took them 30 years to reach the Indian subcontinent. Most of the people attending the show were not even as old as the wait. The most successful and the most popular heavy metal band of all time, Metallica was going to make its debut on Indian soil on the 28th of October 2011. When the D-day arrived, it wasn’t without its share of hiccups. The much-awaited Gurgaon show was cancelled at the last minute which resulted in a massive riot at the venue, the damage of expensive equipment and most importantly, the disappointment of thousands of fans who hoped to catch a glimpse of their favourite band.

Yet, fans from Bangalore were desperately hoping that there wouldn’t be a similar turn of events in their city. Here was this near-impossible opportunity to watch the band that has influenced so many hard-rock and metal acts in the past 20 years, live. The flood of tweets and status messages prior to the show only reinforced the already hard-to-contain anticipation.

30th of October, 2011 shall go down in history as the day Metallica tore Palace Grounds apart with their first ever show in India. After the Black Friday in Gurgaon, the threat of the concert being cancelled in Bangalore loomed large but thankfully, the stars aligned and the Gods obliged – the stage was set for one of the greatest heavy metal bands of all time. 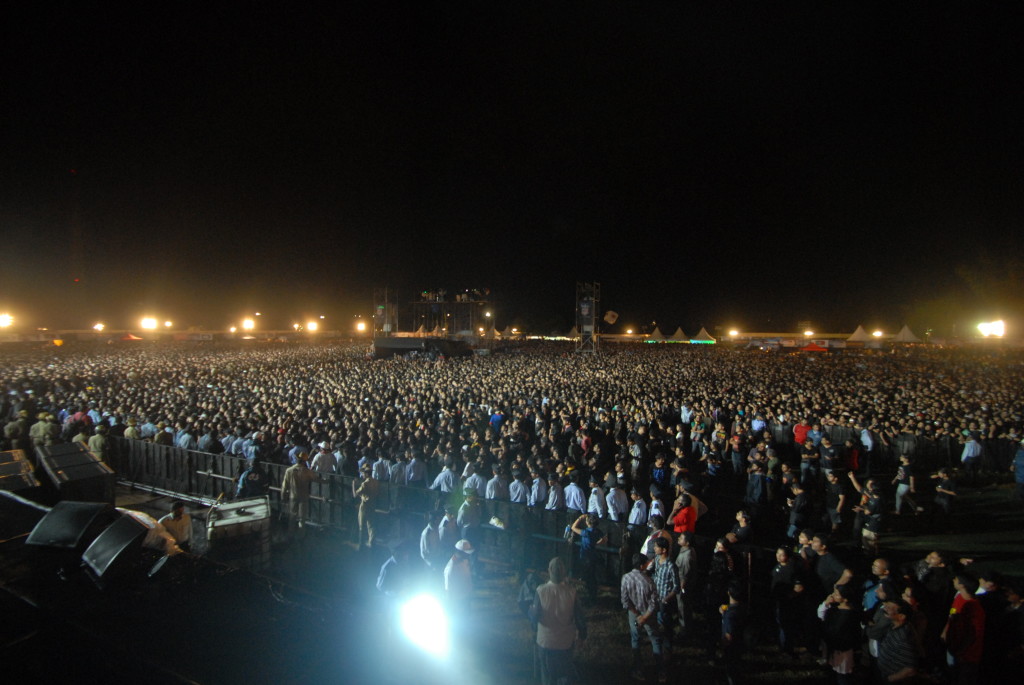 I did my bit by patiently standing in queue for about forty minutes before realizing there was a separate, significantly less-crowded entrance for media! Once in, the show kicked off earlier than expected. Bangalore’s very own Inner Sanctum kicked off proceedings with ‘Human Disregard’ off their debut EP Provenance. The sizeable crowd inside the venue was matched in number by scores of black-tee-clad-people who were patiently waiting outside in queue to enter the concert area. I stood close to the stage and could feel the thump of the bass drum on the side of my face. Sanctum was THAT loud. Their new song ‘Guardian’ followed the concert-staple ‘Agent of Chaos’ as Sanctum ended their abridged set with vocalist Gaurav throwing t-shirts into the crowd. The new-look Sanctum (Suraj on guitars is relatively new and Narayan was filling in for Michael on bass) had yet again raised the bar for Indian metal bands with their combination of technical skill and energy on stage.

There was a steady stream of people trickling in as Nikhil Chinappa dressed in a faux-rock outfit, appeared on stage to introduce the next opening act – Guillotine. He was warmly greeted with a sea of middle-fingers and “f**k you” chants! Since they also hail from Delhi, it prompted a tongue-in-cheek “Delhi Sucks” chorus from the audience, the Gurgaon no-show still fresh in memory. Sadly, Guillotine sounded very flat on the day. Their own-comps were a pointless mish-mash of many genres and to add to the band’s misery, guitarist Takar broke a string during a song. Inevitable FTN comparisons were made as the patient crowd could only muster a lukewarm applause when the band finally finished their set. 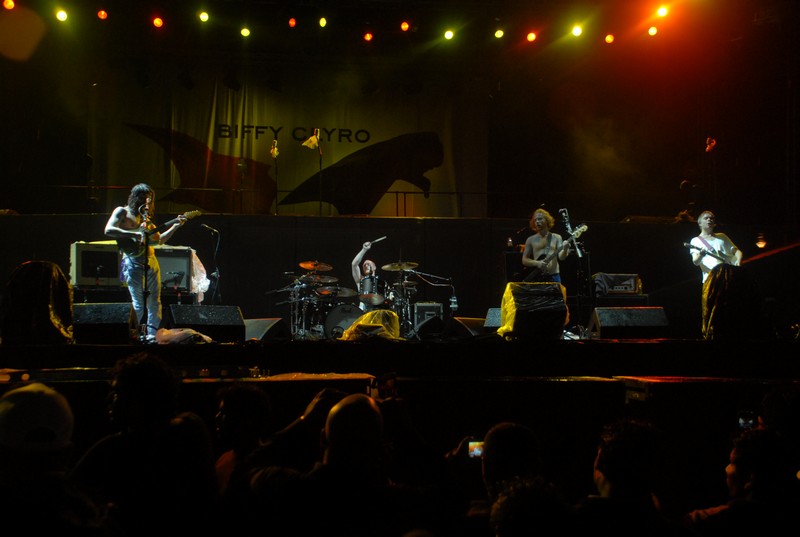 Once Guillotine wrapped up, the concert crew set to work on readying the stage for the international bands to perform. Scottish alt-rock act Biffy Clyro‘s soundcheck took almost an hour to complete as the crowd stood expectantly in the pouring rain. It was getting increasingly difficult to stand or walk about at the venue owing to the annoying slush. I wasn’t sure what to expect when Biffy finally appeared on stage. The three-piece band hailing from Kilmanrock did have a unique sound but it wasn’t something that would whet one’s appetite for some Metallica. Most of their songs bordered on emo-ish indie rock although they did have some riff-y moments. Admittedly, I phased out for most of Biffy’s set, choosing instead to loudly crack Metallica PJ’s much to the annoyance of everyone around me. At this juncture everybody was on tenterhooks, eagerly awaiting Metallica’s appearance on stage. The slightest hint of  sound emanating from the stage during the subsequent sound check- a stray guitar clang, a low-end bass note or a snare hit were all cheered excitedly by the hungry crowd. Fans even took to singing along with the recorded music that blared through the PA system. The rain had subsided and much to everyone’s annoyance a roadie was giving the patient crowd lessons on safety. But at roughly ten minutes past eight, a thousand hearts unanimously skipped a beat.

The LED screens to the right of the massive stage played a clip from the iconic western – The Good, The Bad and the Ugly whilst Ennio Morricone’s ‘Ecstasy of Gold’ played out in the background. And then…the epic intro riff to ‘Creeping Death’. That was it. The crowd got their first glimpse of their heroes and went absolutely berserk. This was the moment everyone had waited for. Hell, up until the day of the show there was a certain apprehension as to whether the Bangalore gig would even happen. Even during the opening bands’ performances we were informed that the show would only happen if all the safety arrangements were in place. All the apprehension and uneasiness was lifted off our shoulders in an instant as we saw and heard Metallica. Live for the first time in India! 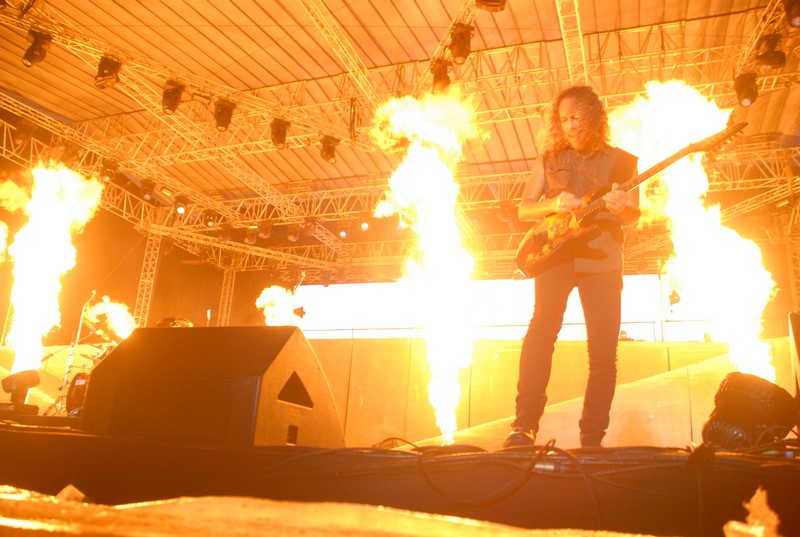 They carried forward the energy of ‘Creeping Death’ into ‘For Whom the Bell Tolls’. A good chunk of the elated crowd sang along to the chorus and chanted “Die! Die! Die!” with fists raised in the air. Astonishingly, Hetfield’s vocals sounded exactly like the studio versions of the songs. The last few bars of ‘For Whom…‘ gave way to ‘Fuel’ and I’m certain that a few heads exploded thanks to the sheer awesomeness of the moment. The pyrotechnics on stage lit up just as the “Gimme Fuel Gimme Fire” lyrics were heard. People around me were flashing texts on their phones with the probable setlist and were trying to second-guess the next song. Hetfield then asked the crowd if they liked the vintage stuff just as the ‘Ride the Lightning’ opening riff drowned out the crowd’s cheers. The live version managed to capture the sense of maddening paranoia of the studio version even though the tempo seemed a tad slowed down. Lars Ulrich and Rob Trujillo provided the solid rhythm section to Hetfield’s riffing and Hammett’s solos. Hammett teased the crowd with a solo that was the lead-in to ‘Fade to Black’. Hetfield, with only his silhouette seen against the backdrop of the giant LED stood on the upper tier of the stage while the rest of the band thrashed it out below. They then played ‘Cyanide’ from their latest album Death Magnetic (after Hetfield asked the crowd for permission to do so!) before playing the iconic ‘Memory Remains’. You would be hard-pressed to find an audience in the world who would sing the outro for a minute after the song was over but Bangalore did just that. Hetfield and Co. stood at the precipice of the stage and just soaked it all in, conducting everyone to keep it going. 40,000 fans sang in unison even after the music had stopped. The moment cannot possibly be described in words, the closest description I can come up with – perfect. 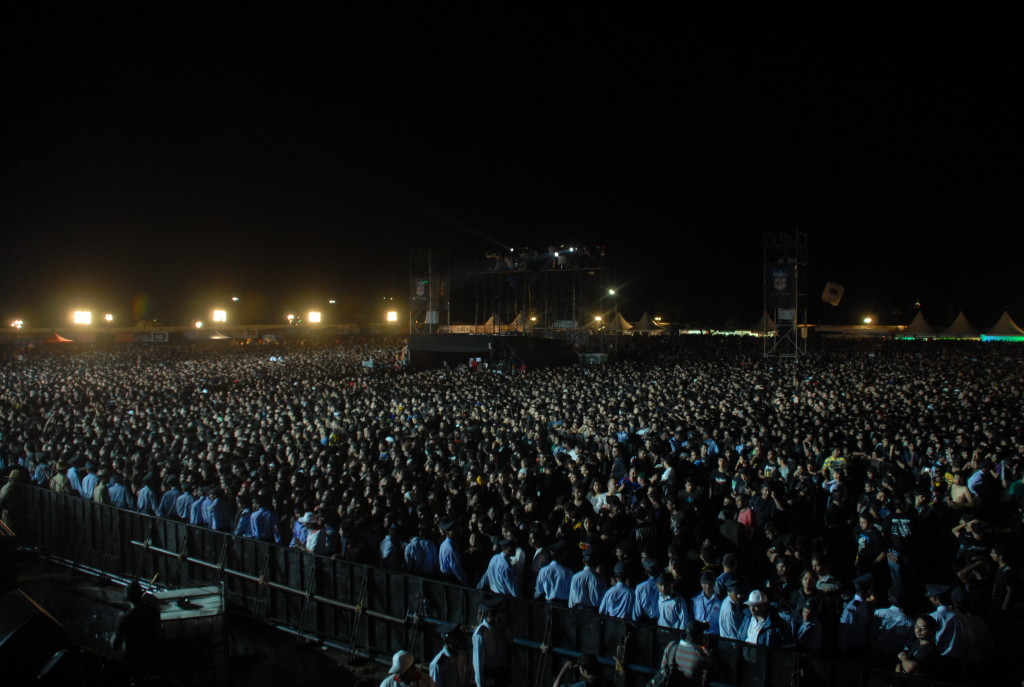 Metallica’s newer work has been criticized in some circles but when played live it is a different beast altogether. The eight minute epic ‘All Nightmare Long’, one of their heaviest tracks to date, was played with ease. It didn’t escape my attention that most people weren’t too familiar with the newer tracks and chose to record the spectacle on their phone cameras instead. Helicopter and airplane dubs playing over the PA meant only one thing- the anti-war song (and my personal favourite) ‘One’. My trance-like state was mildly disturbed when everyone around me jumped up and down, devil’s horns held up in the air. ‘Master of Puppets’. That genius, Hetfield even did the evil laugh in the song much to everyone’s delight. People had travelled from far-flung corners of the country to witness this event and it lived up to all of their expectations and more. People clutched their foreheads in disbelief at what they were witnessing. Hetfield, clearly overwhelmed at the fantastic response thanked the audience before launching into ‘Blackened’ after which the lights dimmed for ‘Nothing Else Matters’. Words cannot do justice to how powerful their performance of this anthem was. It might sound repetitive when I mention 40,000 people singing in unison, but I can’t word it differently – it was precisely that! They closed their unbelievably good setlist with ‘Enter Sandman’. Scores of already-hoarse, nostalgic teens and young adults headbanged as fireworks went off above the stage. The stage was obscured by a sea of devil’s horns and whiplashing necks. This was as good as any climax can get. 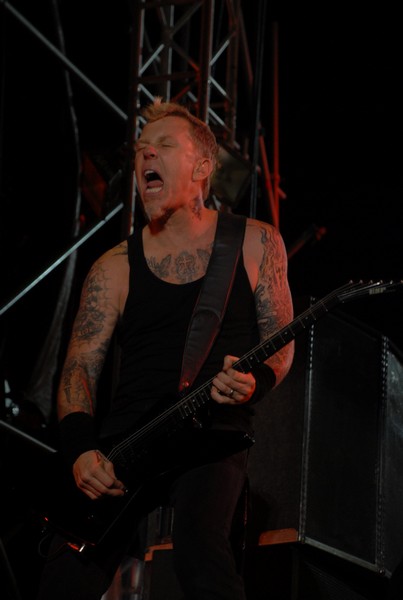 Metallica reappeared on stage for their encore and began with a cover of Diamond Head’s ‘Am i Evil’ (Did anyone spot the intro riff to ‘Frayed Ends of Sanity’ just before it?) The pummeling riffs of ‘Battery’ soon followed. For a band that has been around for 30 years there was absolutely no dip in the energy level. Every song was a tour de force that had a vibe that united everyone present there – they were a part of something special. They ended their set with ‘Seek and Destroy’ from their debut album Kill ’em All. The band members individually thanked the people present and Ulrich promised to come back to India for a gig in the future. Plectrums were generously flung into the crowd and so were drumsticks. Heck, even a policeman managed to get one!

While walking out of the packed venue, I heard a few people complain about Hammett flubbing a couple of solos and about the band not being as tight as they should have. Complaints about the organization and the security at the venue also echoed. But the concert had a greater significance in the grand scheme of things for such glitches to matter. For years now, there have been several untrue rumours about the possibility of Metallica touring India and when it finally happened it left an indelible mark on the metal fans of the country who had waited twenty long years (or more) for this opportunity. All the hype surrounding the event was justified as Metallica brought along a killer setlist and oodles of energy and badass-ness to Bangalore. If a future tour does indeed happen, splendid! If it doesn’t, the memory remains.