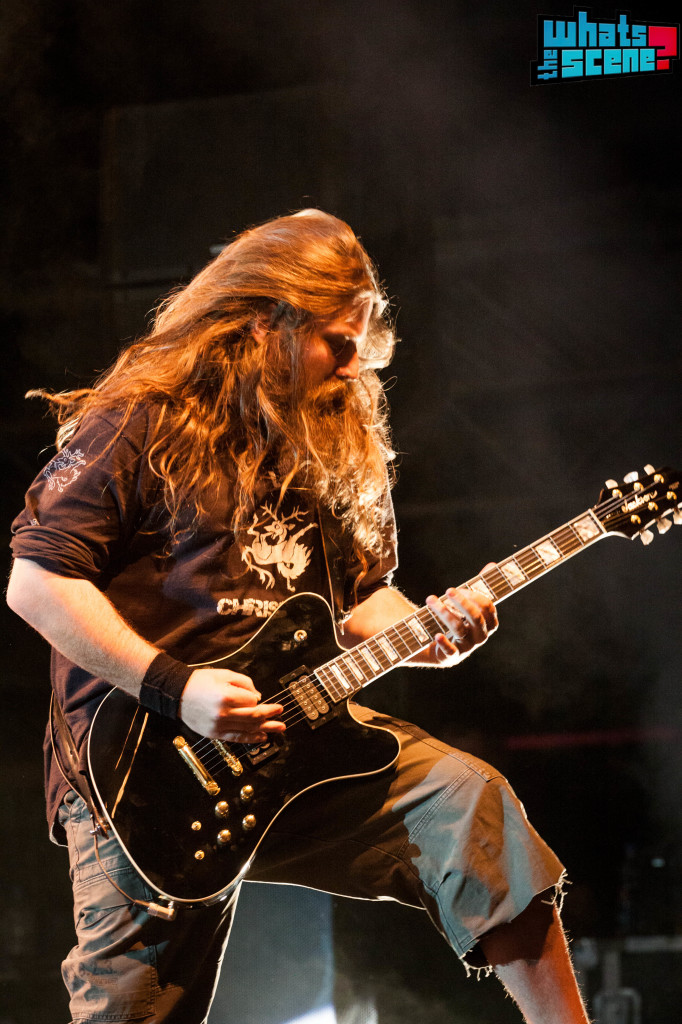 May 26th, 2012 as many diehard metal heads had predicted was brutally EPIC. You would have had to be extremely daft to expect anything less from a lineup that read – Escher’s Knot, Bhayanak Maut, Skyharbor and finally Lamb of God. Thanks to the new government rule which prohibits Palace Grounds from hosting any further gigs, the concert took place at Clarks Exotica, which looked like a rather serene resort till the Metal gods took to the stage and tore the place apart. The venue was by no means a letdown but comparing it to the Mecca of heavy metal in India, Palace Grounds, would be extremely unfair (to both Palace Grounds and Clarks Exotica). The location being 30 kms away from the city didn’t seem to pose a problem to the 6000 plus people that showed up but mineral water bottles being sold at an exorbitant fifty rupees a litre did. Unwilling to move from their vital vantage points, the water shortage soon turned into a mini crisis for the fans upfront. The enduring fans however were soon rewarded as the guys from Bhayanak Maut were kind enough to throw their own bottles to the thirsty crowd. 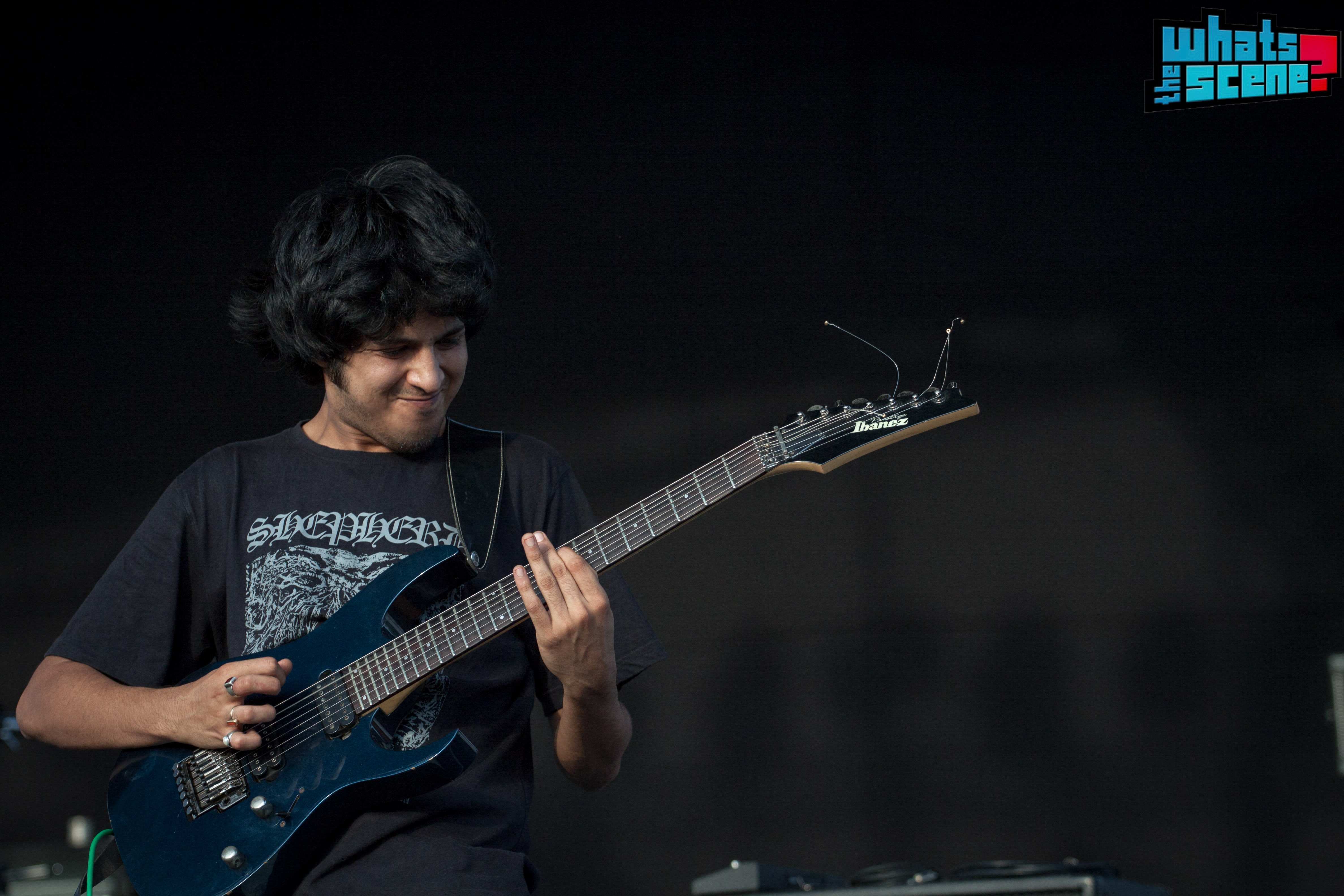 First up on stage (starting sharp at 5 pm) was the experimental metal band from Chennai Escher’s Knot, who played an extremely tight set, playing a lot of their new songs including ‘Reciprocity’ which seemed to have struck a chord with the crowd. It was a pity a lot of fans had to miss out on this enlivening opening act as most of them were either waiting to get inside or were stuck in Bangalore’s famous traffic jams. From playing in the pre party gig for the Lamb of God concert in 2010 to opening for them in 2012, this band has come a long way and is destined to scale more heights. 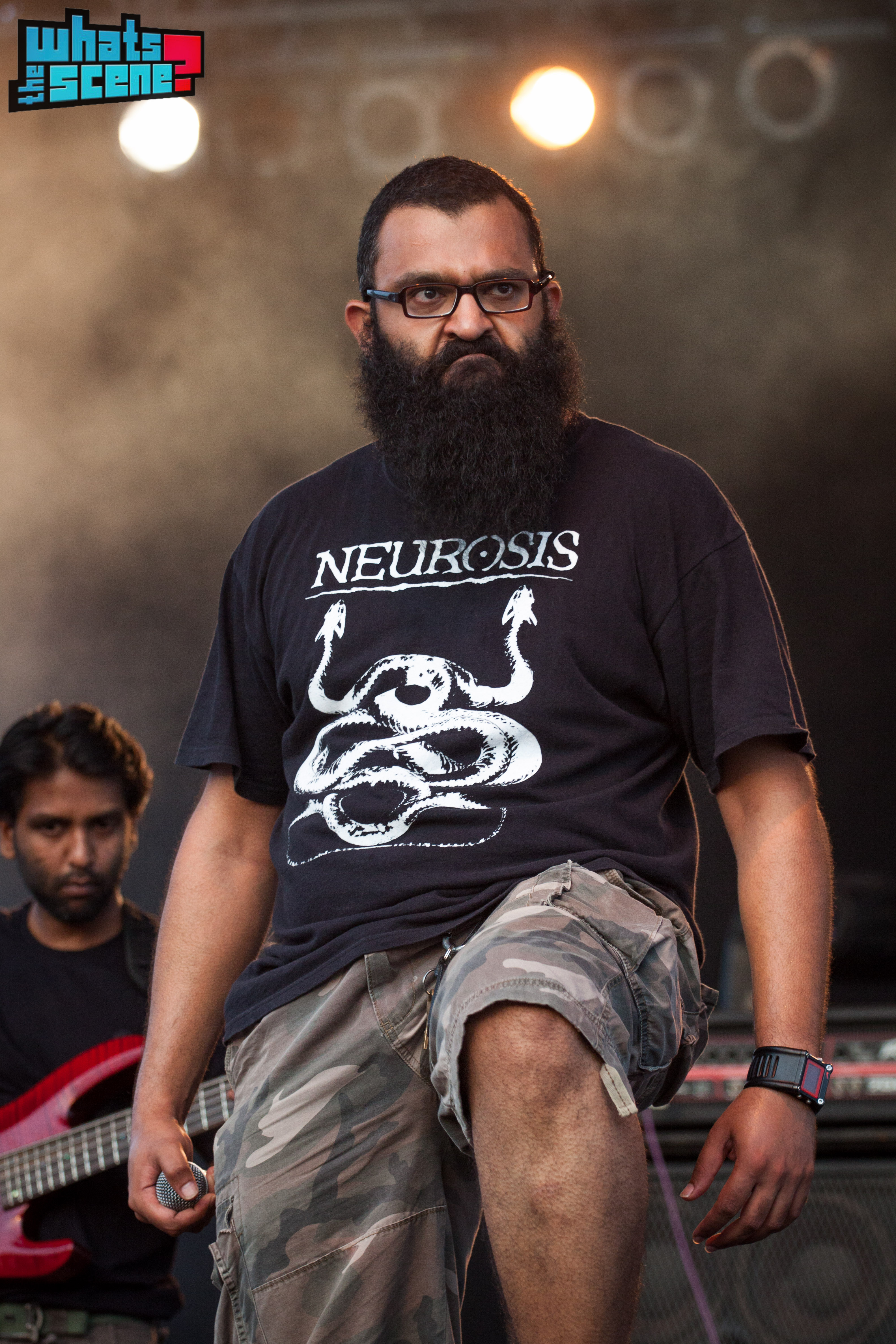 By the time Bhayanak Maut (who were up next) took stage a sizeable crowd of close to 5, 000 had gathered, and in true BM style they brought it that evening. Their set was a healthy mix of some old and new songs – their brand new song ‘I am Man’ along with with some of their older songs like, ‘Perfecting the Suture’ and ‘Ranti Nasha’. The guttural twins Sunneith and Vinay were specially brutal and with the double guitar attack of Aditya and Venky, teamed with Rahul on drums and Swapnil on bass they prepped the crowd perfectly for the mayhem to follow (though Sunneith’s vocal levels on the PA was quite low for most part of the set) It took them no time to get the crowd going, and the two gigantic circle pits on either side of the stage were testimony to it. Randy Blythe in particular seemed to take a liking for the band, he was spotted clicking pictures of the band whilst their set was on and later went on to make a personal dedication to them when Lamb of God was playing. 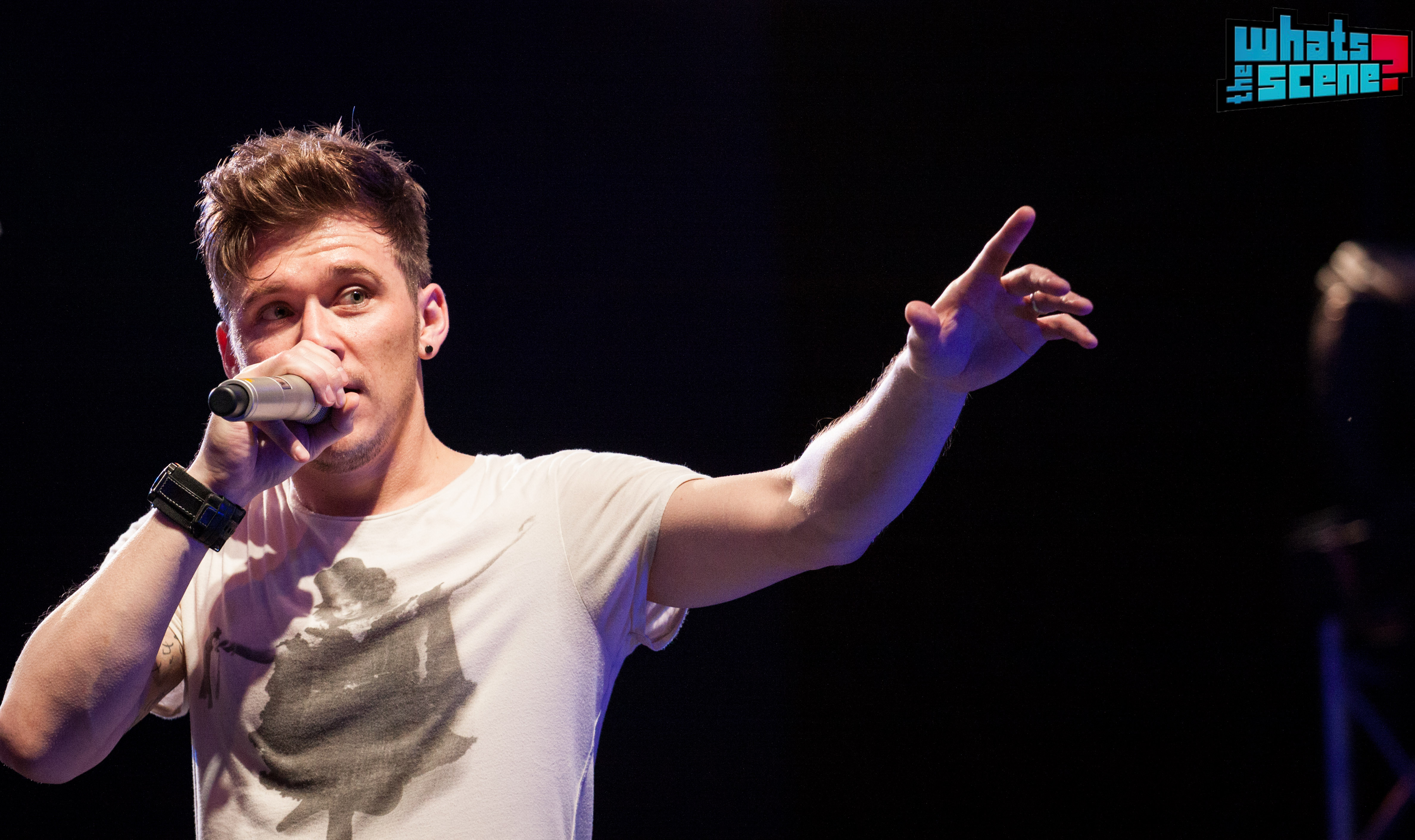 Next up on stage was Keshav Dhar’s much anticipated live act with his band Skyharbor; going live for the first and probably (hopefully not) the last time with Daniel Tompkins. Though Lamb of God was the headlining act, I personally know a lot of people who came down just to watch Skyharbor’s set. The band has been creating a lot of buzz, for all the right reasons post the release of their first album earlier this year, Blinding White Noise: Illusion and Chaos, which also features Marty Friedman (ex-Megadeth) in a couple of songs. 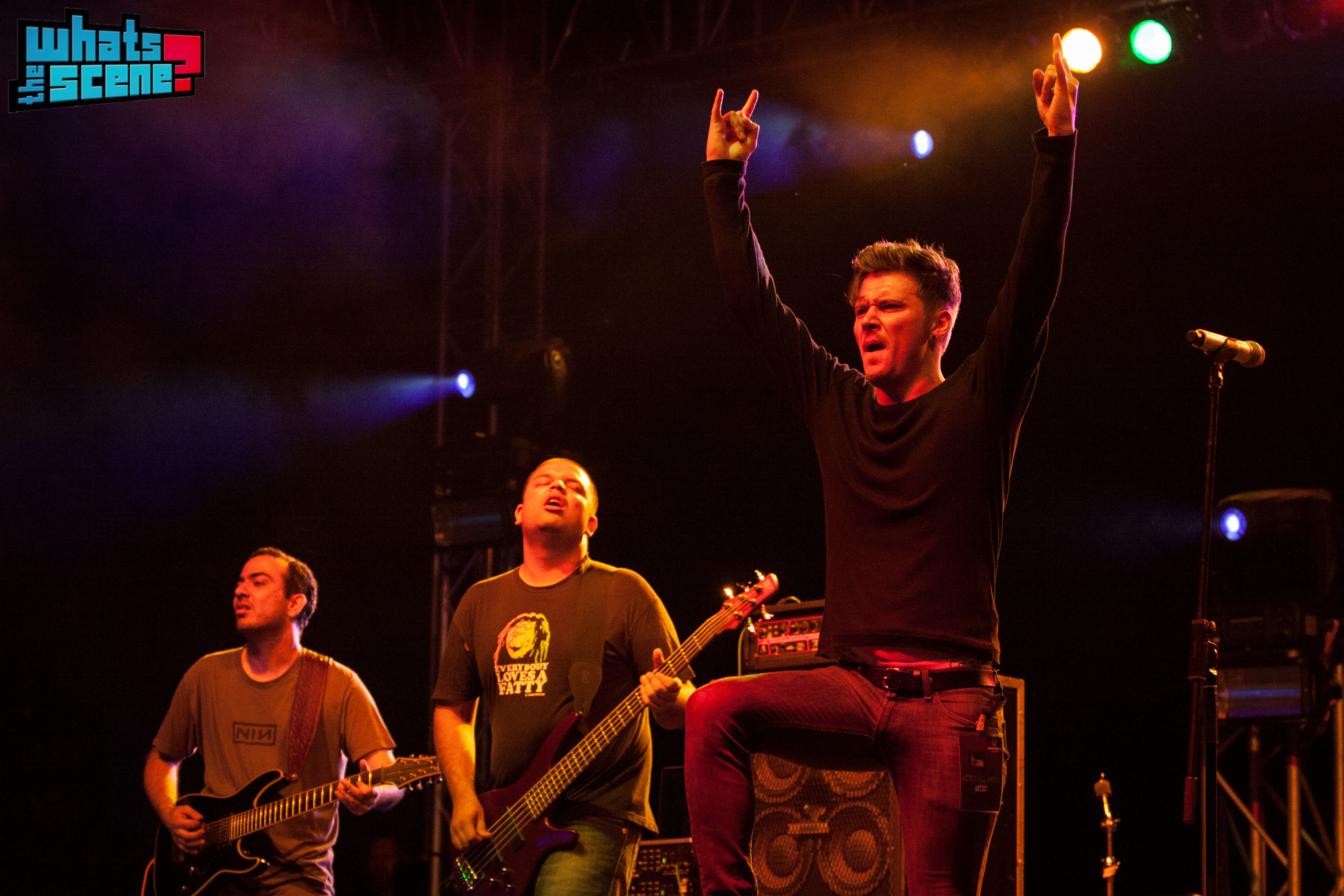 After the insanity of BM, Skyharbor was an invigorating change with their breezy vocals and intricate guitar riffs. You’d be forgiven to think that the recently moshing crowd was replaced by an opera audience (dressed in black metal t-shirts and combat boots though). Their set featured songs from Illusion and their sound was awe-inspiring to say the least. Keshav was his usual legendary self, and it was so refreshing to watch him just stand there smiling at the crowds while playing some of the most mind-boggling stuff on his guitar effortlessly, while Devesh Dayal from Goddess Gagged supported him beautifully. Dan’s poignant vocals melted perfectly with the sound of the band and it’ll truly be a pity to not watch him sing a ‘Celestial’ or a ‘Catharsis’ live again. Although I must say, it would have been awesome to see Sunneith on stage creating some ‘Chaos’ with the band, considering he was just around the corner. 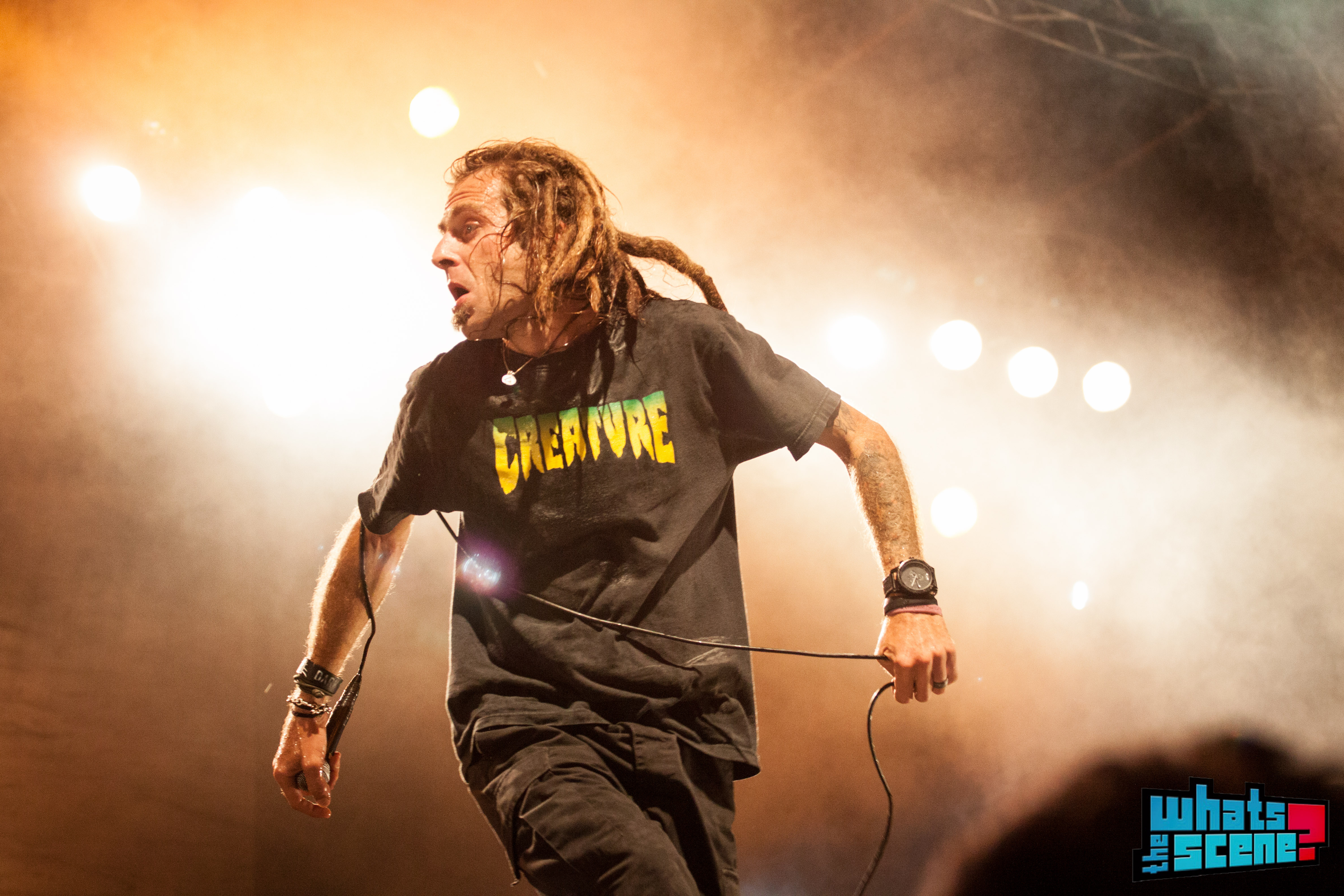 Up next on stage for the second time in Bengaluru was the headlining act from Richmond, Virginia, Lamb of God. They came on stage to thundering applause and started their set with ‘Desolation’ and ‘Ghost Walking’ from their brand new album, Resolution after which the entire crowd of 6000 plus metal heads walked with Randy in Hell. The band thankfully played a lot of music from their earlier albums which had a more raw sound compared to the polished sound of ‘Resolution’.

The crew filming for Lamb of God’s upcoming movie must have, without a doubt, got some spectacular shots of wave after wave of head banging metalheads I literally had goose bumps when the entire crowd sang Something To Die For’ along with Randy. The band followed it up with crowd favorites, ‘Hourglass’, ‘The Undertow’ and my personal favorite, ‘Omerta’ which all led to two of the most massive and wicked circular pits I’ve ever seen. (People moshing had nothing to worry about; there was an ambulance on standby!) 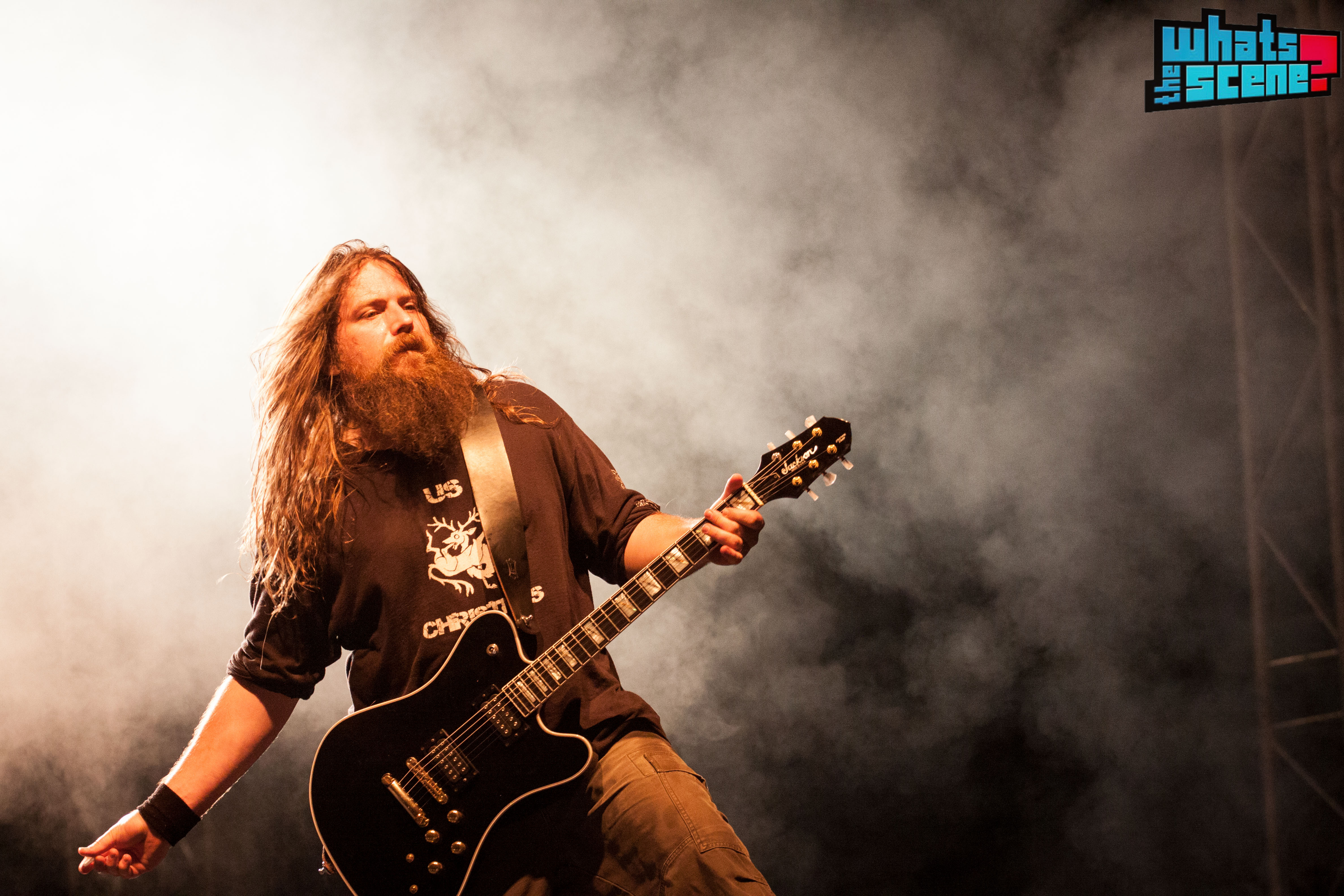 They belted out some more classics like ‘Contractor’, ‘The # 6′ and another crowd favorite in ‘Laid to Rest’ before going off stage for a bit giving the audience a chance to comprehend the insanity that had just hit them. But before any sanity could sink in, the band was back on stage with some of their most characteristic songs like ‘In Your Words’ and ‘Redneck’ before sort of calling a premature end to the night (considering it only 9:30) with yet another crowd favorite ‘Black Label’, arguably their most popular song till date. 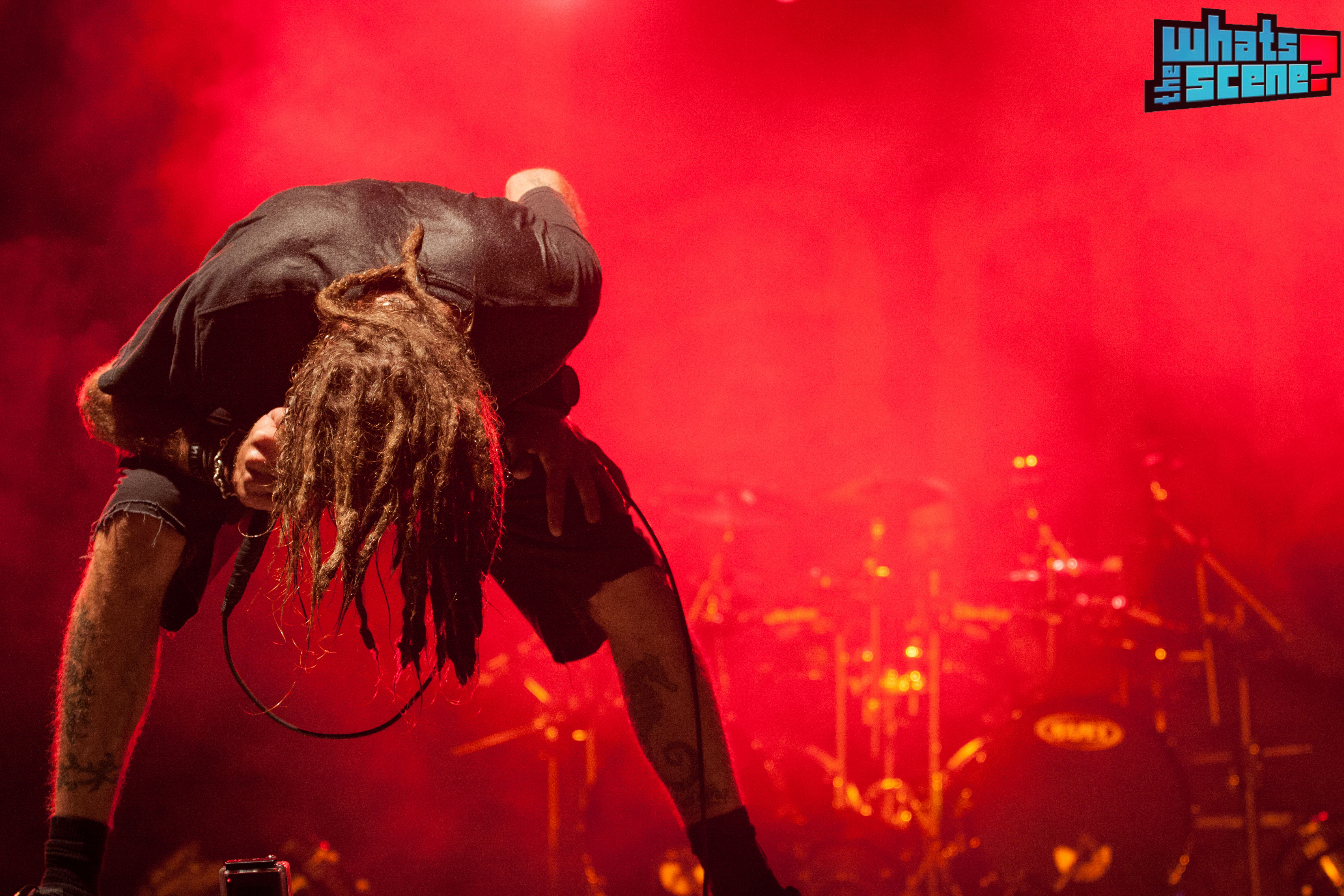 The party however wasn’t over for the 6000 plus metal heads who had gathered at Clarks Exotica just as yet, as Overture India decided to play Santa Claus to them by announcing that, “the booze is on the house”. That pretty much sums up how epic that night was. Was the concert better than Lamb of God’s first coming on May 15th, 2010 at Palace Grounds? Well, you don’t compare two great concerts; you just have to be there to enjoy them.