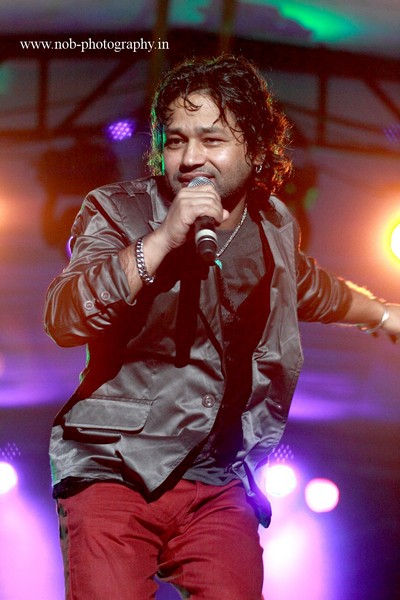 Kailash Kher, charismatic singer in the Sufi-rock style, proved yet again that he is right at the cutting edge of fusion music in India during his performance at IIM Bangalore this weekend.

I left early for the venue to beat Bangalore traffic, and reached so early that I caught the band’s sound check. I chatted with lead guitarist Paresh Kamath who told me about the lineup for the concert, especially singling out Tapas Roy on mandolin and saz (long-necked Turkish string instrument). 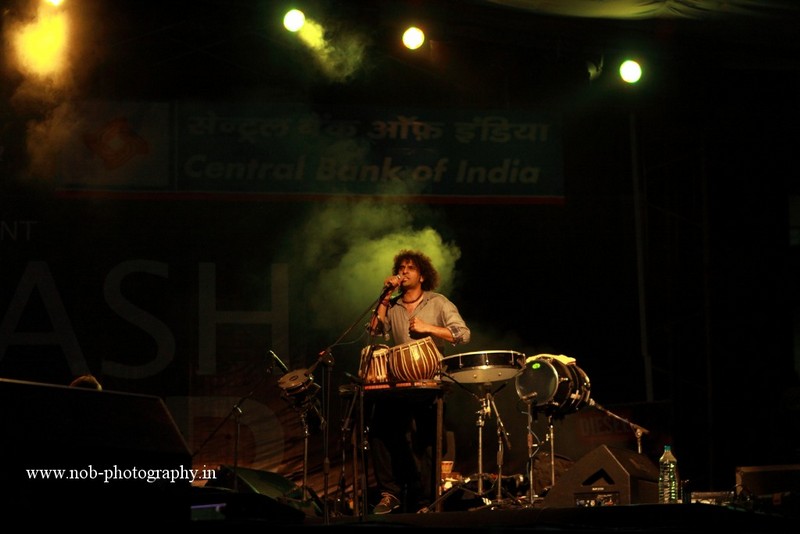 Roy’s instrumentation added a distinctly Middle Eastern flavour to the performance that evening. But that’s getting ahead of the story a bit! The crowds began to fill in late in the evening as the crescent moon, Venus and Jupiter lined up in the east, and the stars of Orion filled the sky above. The stars then descended on the open-air stage at IIM-B grounds: Kailash Kher and his band Kailasa. 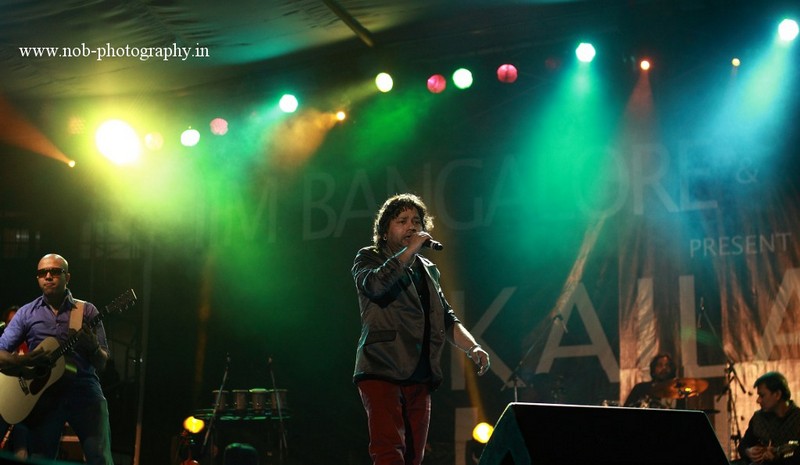 In each track Kailash Kher’s soaring vocals and earthy style shone through, right from the opening tracks ‘Dilruba’ and ‘Aoji‘ down to the closing pieces ‘Allah ke bande‘ and ‘Saiyyan’. The songs ‘Teri Deewani’ and ‘Na Batati Hu‘ drew huge applause, as well as ‘Tu Kya Jaane’ and the title track from his latest release, Rangeele.

“There must have been at least 7,000 people in the audience,” event organiser Vasundhra Jain told me; she said Kailash Kher was chosen as the headliner for their Unmaad Festival because he is not only a commercially successful singer but also keeps his independent and innovative edge, and is involved in social causes (eg. against human trafficking, child labour, global warming). He also performed in support of the recent Anna Hazare anti-corruption movement. 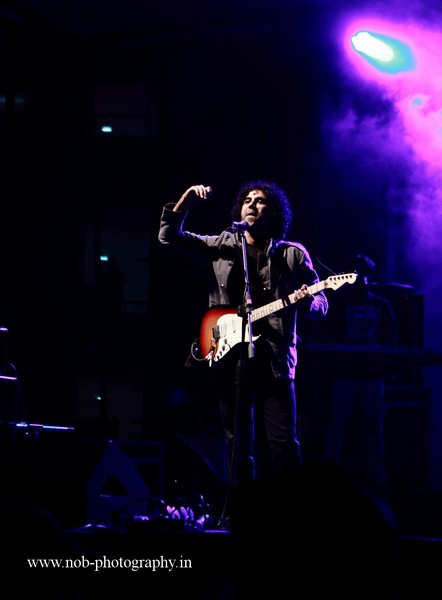 Indeed, at the Bangalore performance Kailash Kher revealed not only his creative edge and infectious energy, but his humourous side and social awareness, delivered in irreverent “Hinglish” while bouncing and jumping around the stage.

“English is the first most confused language in the world,” he joked. “Let us focus not just on movie music but indie music also,” he urged the audience, taking a gentle dig at the Bollywood industry which dominates much of the Indian popular music scene. Kailash Kher has had hits in Bollywood as well, which has won him admiration from the indie scene for being successful in both areas.

“Don’t focus just on branding and marketing, you must also cultivate a sense of corporate social responsibility,” he told the students in the audience. “Half of life today is pretentious anyway, don’t waste the other half,” he joked. 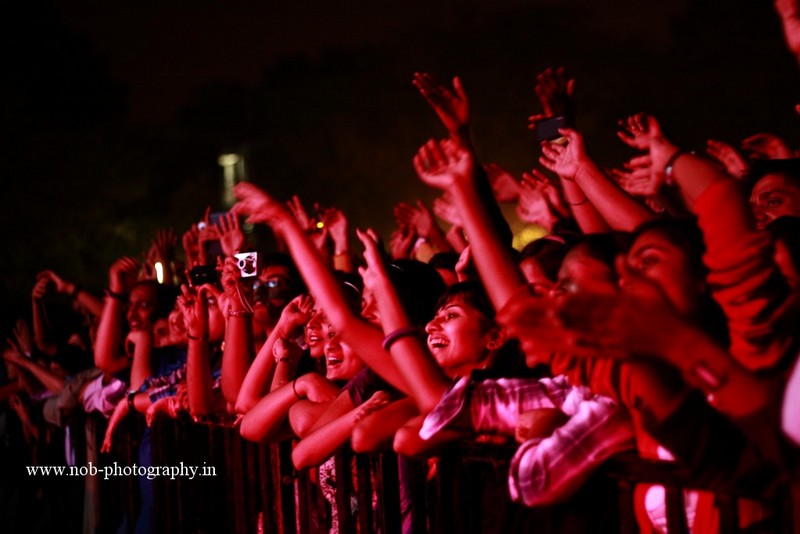 He endeared himself to the Bangalore audience by saying that the people and weather of Bangalore were perfect for music, and he even said a few words in the local language Kannada. He invited a couple of girls to join the band on stage for a dance, and seven girls eventually joined him. “Live life Queen size,” he advised them.

“The time for this performance is very short,” he said, taking a dig at the stifling government regulations and the “moral police” in India who insist that live entertainment and pubs shut down at the ridiculously early hour of 10 pm or 11 pm, an absolute dampener for the live music industry.

His Sufi messages drew the most applause. “Divinity is in love, everything else is bakwaas (nonsense),” he said. 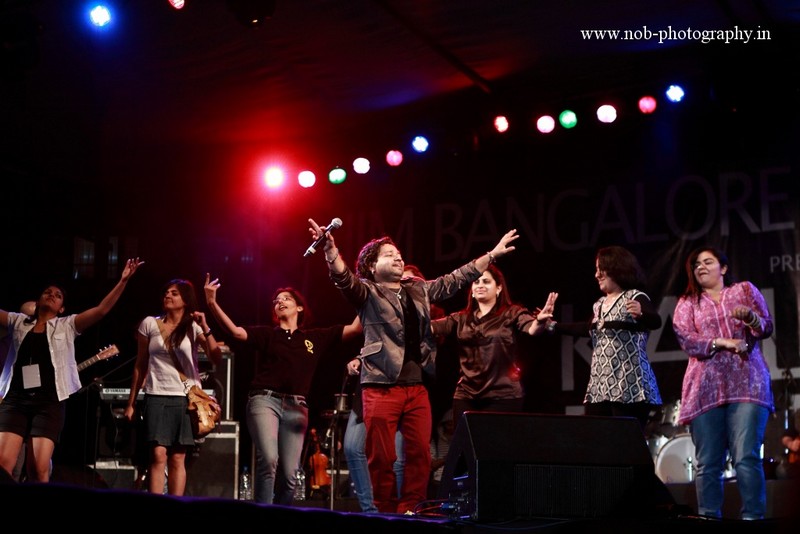 For his last song he called on everyone to dance. “Including you sitting there, you with the tie,” he said, singling out an attendee in the ‘VIP’ section.

Now in his late 30s, Kailash Kher appeals to a wide range of Indian society, and has a huge fan following abroad as well. His early influences included spiritual music, folk songs of North India, and classical music (especially Pandit Kumar Gandharv). He then moved to Mumbai in 2001, singing jingles for various TV and radio commercials.

In addition to Hindi, he has sung songs in a range of Indian languages such as Oriya, Bengali, Malayalam, Tamil, Telgu, Kannada, Gujarati, Marathi, and Punjabi. He has been involved in hundreds of Bollywood film songs, and has collaborated with Shankar-Ehsaan-Loy, Vishal-Shekhar, Salim-Sulaiman, Zakir Hussain, Vishal Bhardwaj and A.R. Rahman. His songs have featured in Hindi movies (eg. Mangal Pandey, Corporate, Salaam-e-Ishq) as well as other regional movies in Kannada (Junglee, Jackie). 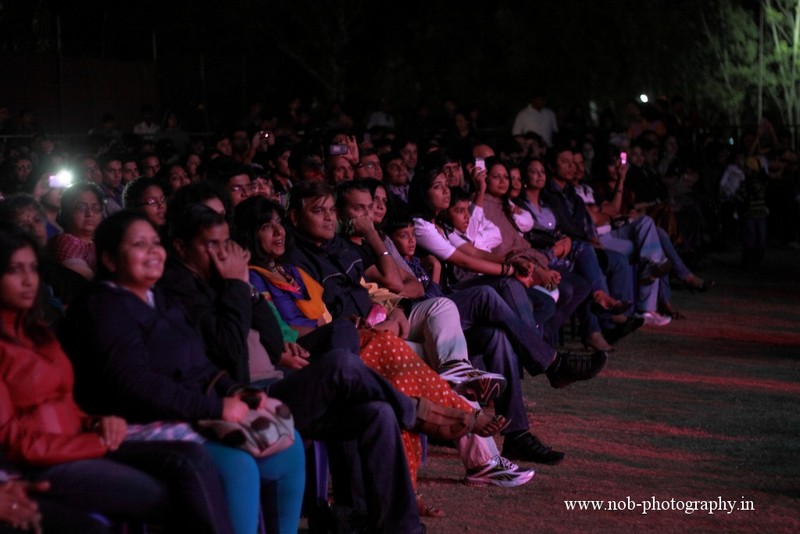 The band’s first independent album Kailasa (2006) and second album Kailasa Jhoomo Re  were huge hits, as well as the subsequent ones, Chaandan Mein and Yatra. This was seen as part of a broad revival of Sufi literature and lyrics.

“Kailash has this rare touch of marrying tradition with innovation in his compositions,” according to Adarsh Gupta, head of business at the label Saregama India, on the release of the latest album Rangeele. On TV, Kailash has also served as a judge on Indian Idol and IPL Rockstar.

His music has been described by critics as “intoxicating,” “hypnotic,” and commended for blending Hindustani classical forms (dhrupad) and Sufi qawwal. Followers of south Asian music notice more of Nusrat Fateh Ali Khan in his voice than Mohammad Rafi.

In contrast to Bollywood-style formulaic and poppy production, Kailash’s songs stand out for their folksy and spiritual nature even with the contemporary mix. Mumbai-based composers Paresh and Naresh Kamath have been co-founders of the band Kailasa and have been with Kailash Kher since the beginning.

“You will get to meet all the killer musicians in my band,” said Kailash, as he introduced the band members one by one at the end of the Bangalore show. The group is bound to find more success as they continue to innovate on the foundations of Indian folk and Sufi music along with a solid contemporary and Middle Eastern feel.