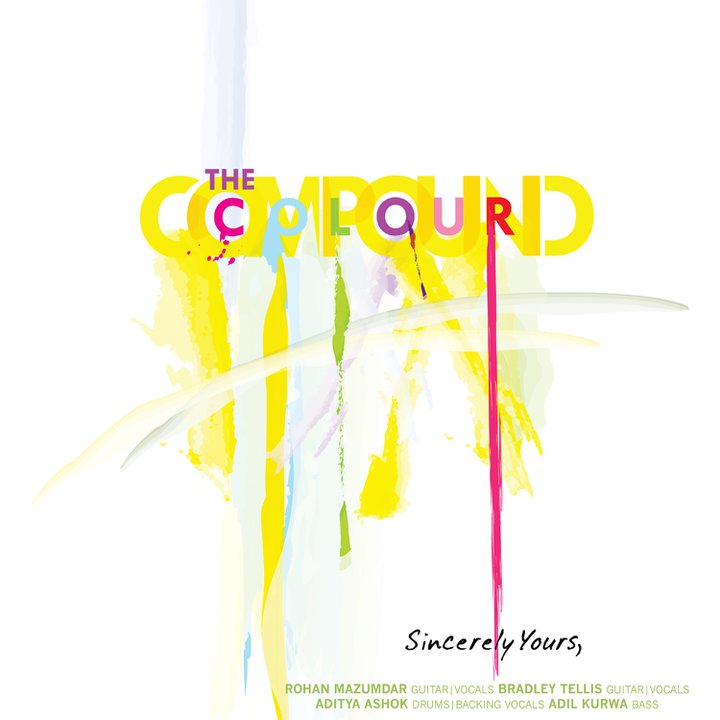 I wouldn’t say their reputation preceded them when I first heard of The Colour Compound a few months ago. I had heard Rohan Mazumdar singing just once before when he was helping out Mumbai-based Something Relevant for a few gigs while their vocalist was out of town and I remember him to be very good. Although I was surprised that they were releasing an EP so early and I had missed the launch of Sincerely Yours at the Blue Frog, they were still highly recommended.

The EP starts off with a song called ‘Just Another Déjà vu’. The first thing that struck me was the nice clean sound of all instruments. Acoustic guitar strum launches the song into a warm happy space as the clean picking and drums kick in. Rohan’s voice is pleasant and gives off a familiar vibe. If you listen closely you’ll find some nice phrasing at the beginning of the chorus, which tells you to expect similar interesting ideas in the songs to come. Watch out for the catchy “Deja-voo-hoo” falsetto, the catchy tune and apt title, and some nice subtle lines by Bradley Tellis’ guitar on the bridge, even as it may give you this nagging heard-it-before feeling.

‘Miracles and Magic’ starts off with some nice stick work by Aditya Ashok. I was told by Rohan in a short conversation that the verses had been shared between Bradley and him, so all the best figuring out who’s singing what part. The bass guitar could have been a little more prominent on this song, but nonetheless, a great pop tune once again.

Drums start off the next track, a seemingly SRV inspired lick. The vocal delivery on ‘Can’t Afford To Cry’ is very impressive, almost reggae, but not. I particularly liked the second verse which begins straight out of the Bad Boys theme by Inner Circle and really underlines the reggae influence. The “Whatcha gonna do when they come for you, and whatcha gonna say when it still won’t go your way” lyric is impressive, as is the nice pretty bluesy solo. The song writing is simple enough as they make great tunes quite memorable with their verse-chorus-verse-chorus-bridge formula.

Rohan’s singing shines through on the next song, called ‘The Other Side’. The vocals are super laid back and really compliment the lazy strumming pattern. Not one of the more memorable ones though.

The dual guitar intro on ‘What’s The Worst’ could have been complimented with a groovier bass line but that notwithstanding, the song is a mid tempo funk ditty. Listening to TCC is kind of like trying to figure out who is singing what parts in an Alice in Chains song. I was smiling throughout the song and particularly loved the clap in the bridge!

My favorite song on the album is ‘You Are Everywhere’. Rohan wrote this song, which would do well as a single, about and for his father. It is a beautiful song that anyone would be able to relate to. The lyrics are charming without getting corny, and the song delivers the highs and goosebumps that a great song should. Easily the best on the album I’d say.

On the whole, The Colour Compound keeps things simple and sincere, like the name of the EP suggests. The most complex part of their music is wondering why they don’t have a video out yet. Although the production could have been a lot better, (the band explained that this was a rushed effort) the music is extremely likable and marketable too. I’m sure their next gig will be well attended, especially by women. It’s a welcome break from music releases of bands that either over think the technical aspects of their songs making them unnecessarily progressive or the heavier sort whose subjects are as varied as the thumbs on my hands. Go check them out! – The Colour Compound