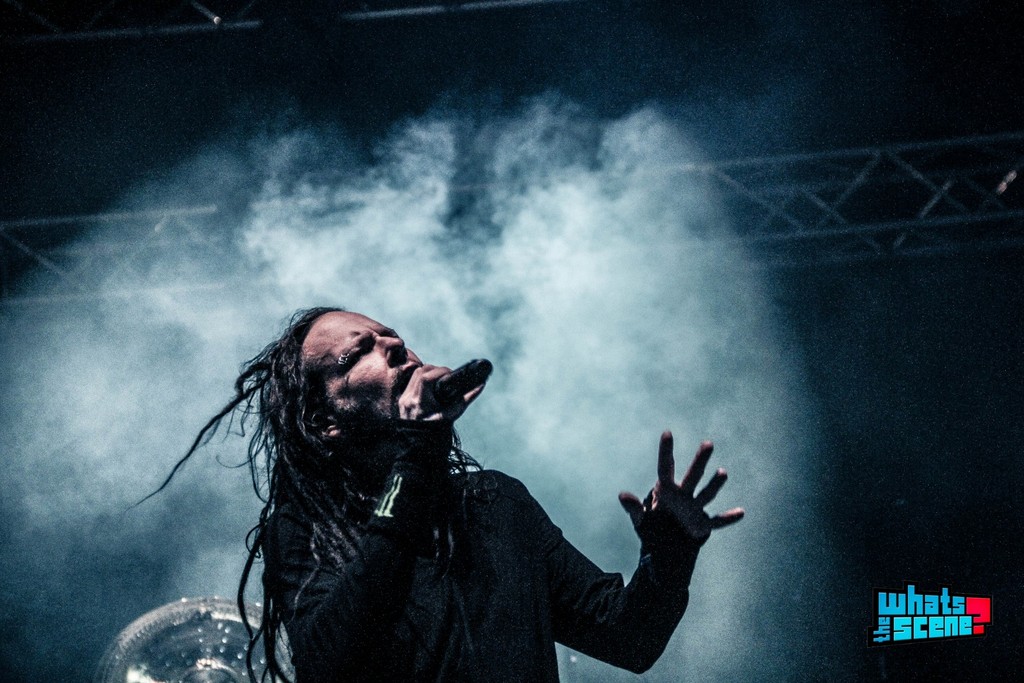 Love them, hate them, you can also ignore them. And thats probably just what you did. Was it condescension or the general disregard for nu-metal, post grunge scene? I would not know really. I for one, was there for a good time and for nostalgia, a delinquent Korn fan that I have been.

A large section of the crowd showed the presence of all kinds. There were some for Korn, Life is Peachy, Issues etc., some just for Greatest Hits, Vol. 1 experience, and some more for Path of Totality and Skrillex. Whatever the mix of audience, I was expecting a lot of dark, unapologetically repetitive verses, accompanied by hateful fist-pumping and the usual headbanging that follows. 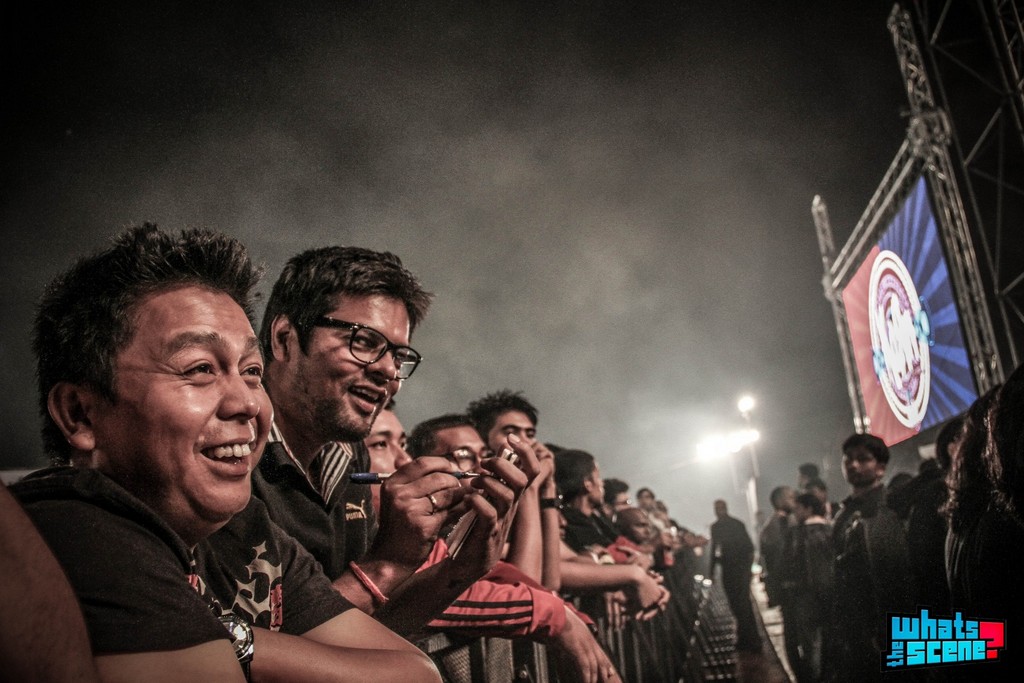 If you excuse the absurd calling-off of the Mumbai show, Mooz have pulled off a neat one to begin with. You may want to debate really what was there to manage? No long queues and the sweaty waiting crowd, no pumped up slogans in the air, no charged up atmosphere prior to the show, only a lazy pattern of cars and bikes arriving, you may even confuse the concert entrance with that of a college. And for us, the media  a warm welcome and a cold-hearted update  no entry for cameras before Korn take the stage, and only 10 minutes in the pit to take your shots and get out.

Inside, there was a ridiculously placed (as always) Platinum lounge to the left, the Premium section right in front of the stage with about 50 people, and then the General section, about 50 meters away from the stage. General section is where the fun had already begun, about 200 people were already cheering up for GG, from behind the evil separatist barricades. Few were seated on the matted ground, most were standing, scattered like last few strands of hair on a balding head. Beverage stalls skirted the venue. More people kept pouring in with the pace of ketchup coming out of a bottle. 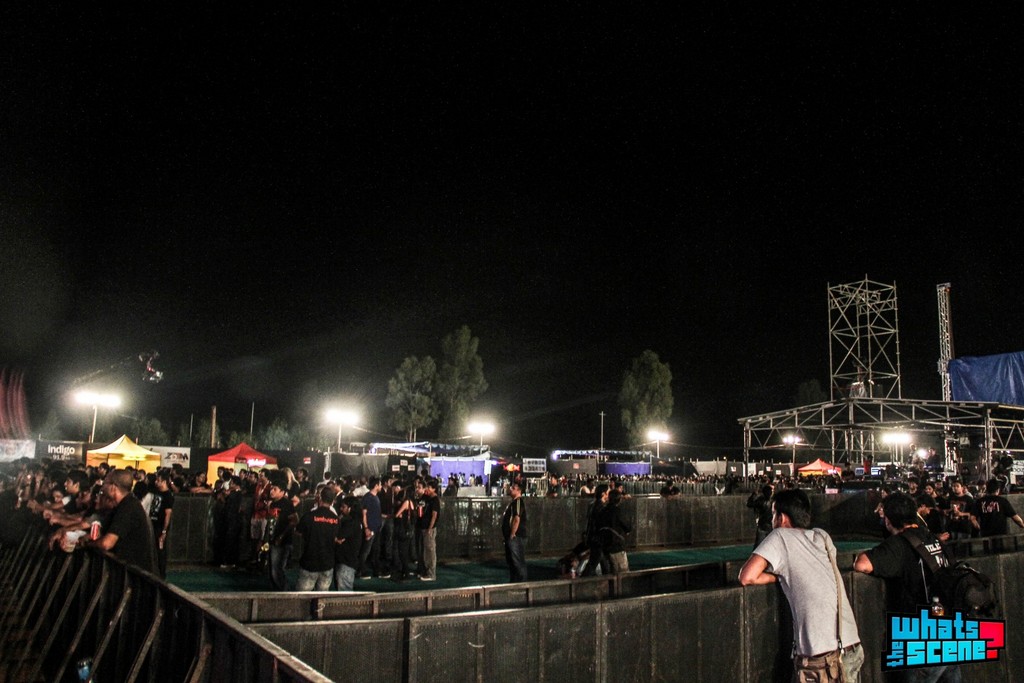 In the past, every time I had wanted to catch Galeej Gurus live, something went wrong  traffic tickets, car crashes and breakdowns included. Anyway, when I finally got to see them, despite being pretty impressed with their talent, the set and the set-up, I found theirs an awfully placed gig. Was it because on top of the legacy-Korn lovers, the new-converts, and the dubstep diggers, the organizers were also expecting an Alt-Rock-Blues crowd? Its like opening up a Chinese restaurant, inviting Tibetan connoisseurs, and serving continental starters. Can it get any more confusing than this? It could also be some Dubai Desert Rock Festival connection where GG had already performed for the same event as Korn. 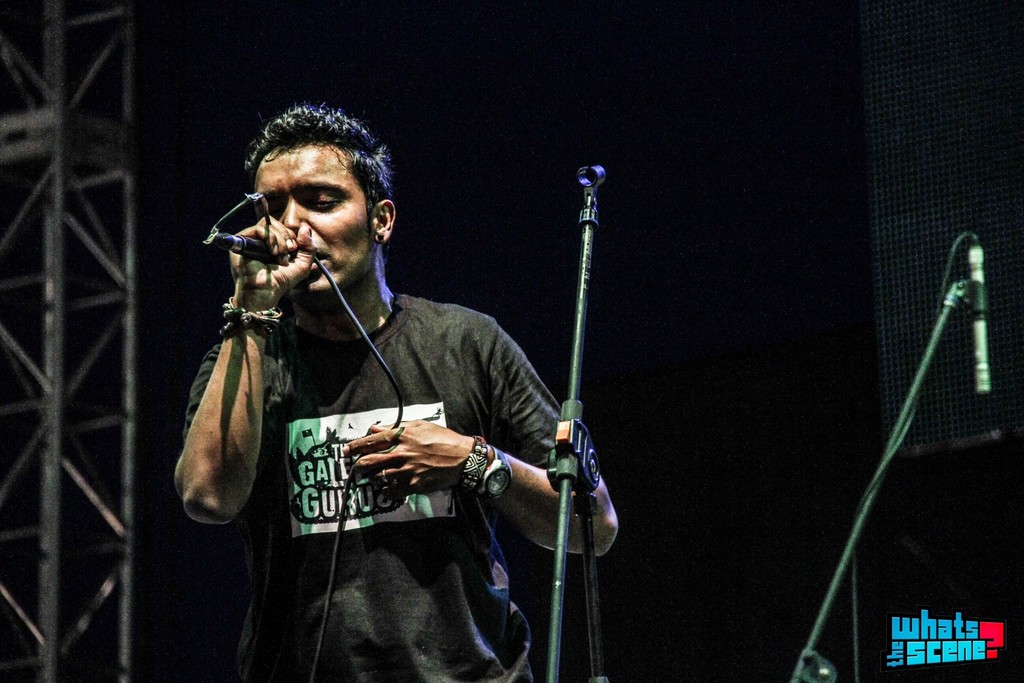 For their set, no matter what Nathan Lee Harris (vocals) tried, for the first few songs he really had to sweat it out more on getting the crowd to react than on doing the singing really. General section, from a place far far away, seemed more receptive to his calls, while the premium seemed more like warming up to the evening, and it was still daylight. Platinum looked more focused on their free beverages and confused as if at an eat-all-you-can stall at a marriage party. Nathan pulled the quick set of 9 songs brilliantly, so did Kishan Balaji (drums), Naveen Thomas Joseph (lead guitar), Matthew Harris (bass), and Ananth Menon (guitars and backing vocals). They played their usual set  Breathe, Play on, Leaving Tomorrow, Make some noise, Physiological Breakdown a.k.a. the one where he pull out the bullhorn, Full meals by the way side, and a few I could not catch the names of. By the end of it, the energy was almost successfully transmitted into the dull premium and platinum sections too  I saw it, or perhaps I really would like to believe it so much. To sum it up, GG to me sounded like a completely evolved band, so now I can look up to them for more than just the entertaining cover videos online. 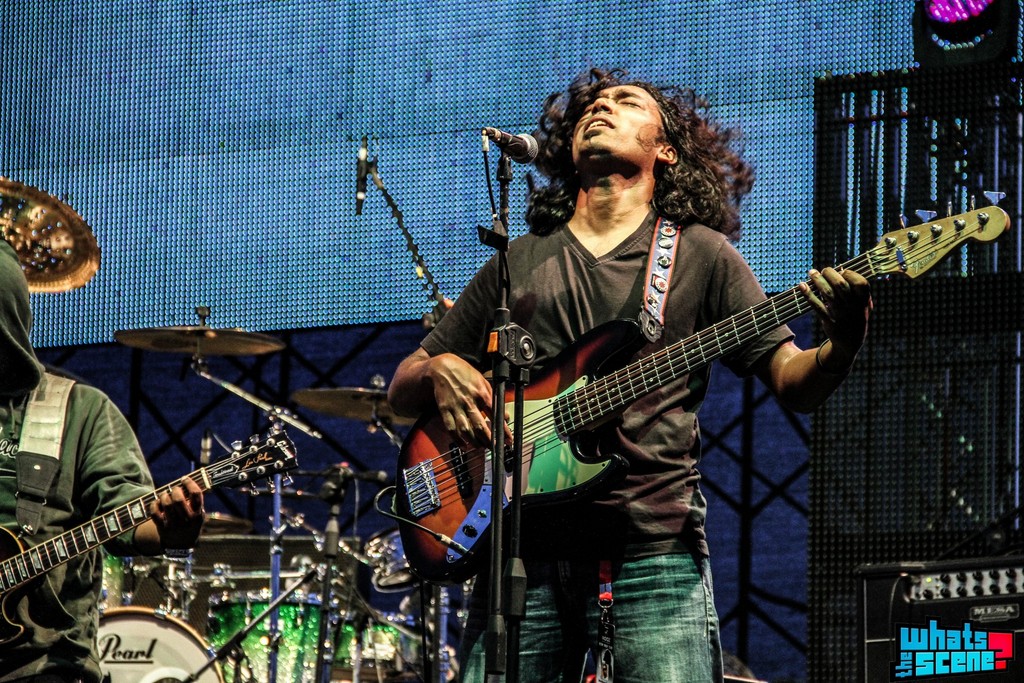 I had been a Korn fan right until the Unplugged experiment and the disaster I think it was. That is when I stopped following them completely. However, Korn III still made me smile with whatever I casually got to hear. It sounded more like a return to the roots, but Path of Totality was totally something else. Its a monster of an experiment, a risk, foolhardiness, a project only the one who furiously believes in himself would undertake  or perhaps the one who fears nothing. The album, released in December 2011, features Dubstep, Drum and Bass, and Electro House artists. When I heard Korn are coming to India as a part of the promo tour, I thought itd be interesting to watch what becomes of the concert, what is performed and what is excused, what is ridiculed and what is enjoyed, what is condemned and what prevails. 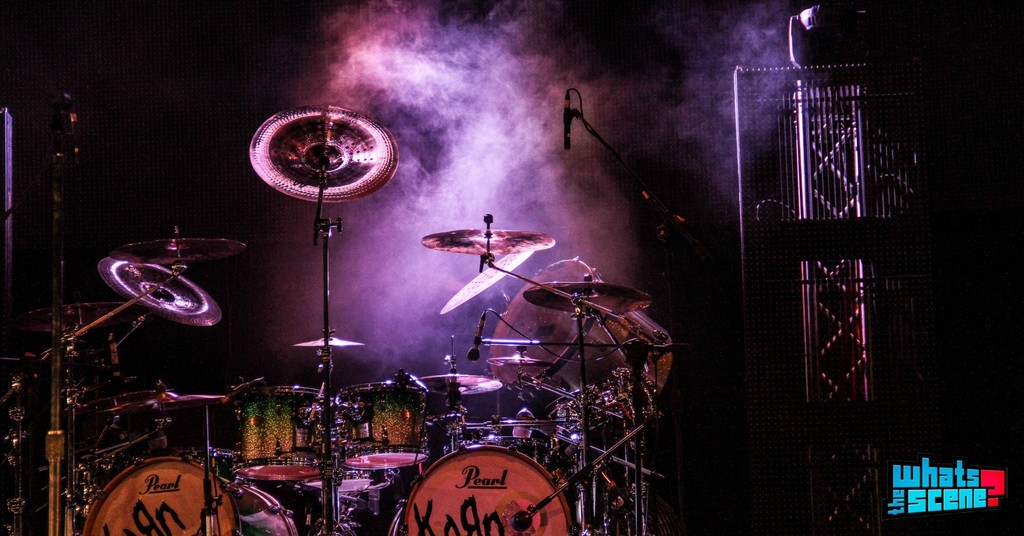 In a conversation, that was louder than the voices of the remaining crowd put together, some fans sounded divided over whether Korn has a signature sound  some said it doesnt, many said it does with JDs vocals, and Munky and Headss earlier guitar work. That said, each of Korns albums does have a distinctive sound  from the rawness of the debut album Korn, the ambient obscurities of Issues, or the paradigm shift towards mainstream with See you on the other side.

The illusive MC announced from behind the equipment on the stage, Are you ready for Korn? and the sudden crowd roar made me realize how the venue has started filling up now. Are you ready for Korn? and the bands crew is still getting the sound right. Are you (muffled eff word)ing ready for Korn? and the mic-stand is being screwed to the stage. Louder – Give it up for Korn and the official intro video for the POT tour starts to play. With slow walks, without a word, the band members take their respective positions and then as they energetically plunge into performing their earlier tracks  Divine, Predictable, No place to hide, and Good God  the crowd comes alive, just like cumin seeds suddenly thrown on a hot frying pan, and theres panic in the pit, shutters firing like machine guns on/in a battlefield. 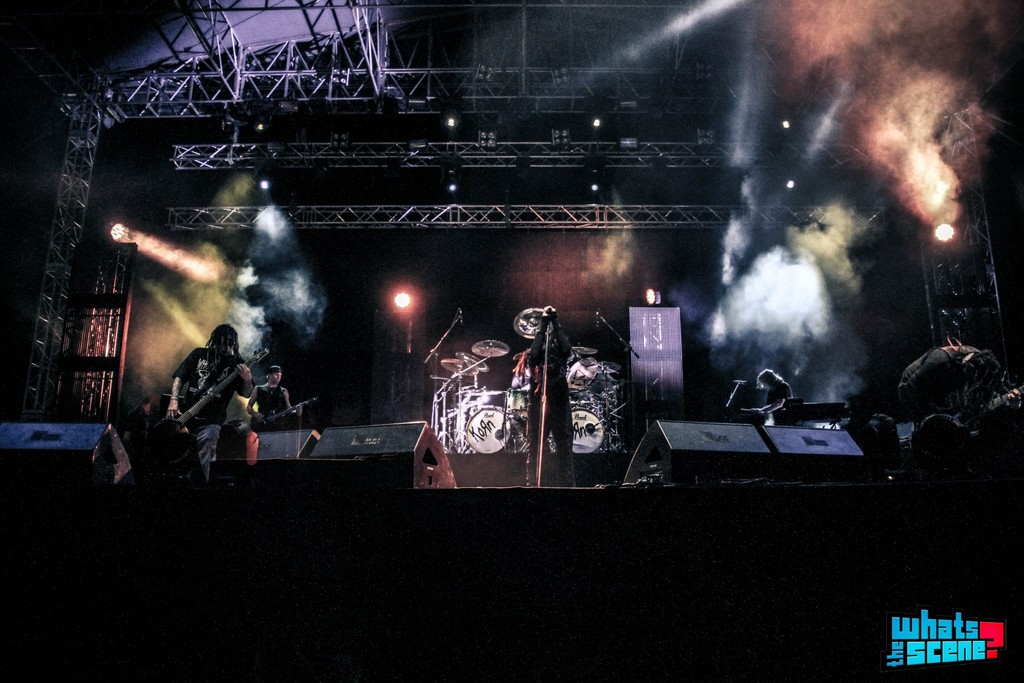 The crowd was still in a nodding mode, while Korn front-man Jonathan Davis, was instantly connected to the music, giving the mic stand a hard time, head banging, throwing his neck as if hammering a nail into the ground with it, while his long tresses looked like a hundred whips slapping the air.The digitally enhanced stage lights transcended an oversaturated spectrum, projecting convulsing, speedy images, every audible boom complemented by a visual blast.

Fieldys bass drove the initial groove making the highs flashy, Munkys guitars made the lows quirky, JDs high pitched voice varied from savage to vulnerable, garnished with piercing screams and curious grunts, and nothing changed when the set entered the dubstep part, only enhanced by Ray Luziers electronically enhanced beats. The pads were also a part of the drums-island he was sitting on anyway. The crowd cheered, with the enthusiasm of kids screaming at the arrival of the candy-man afterschool. 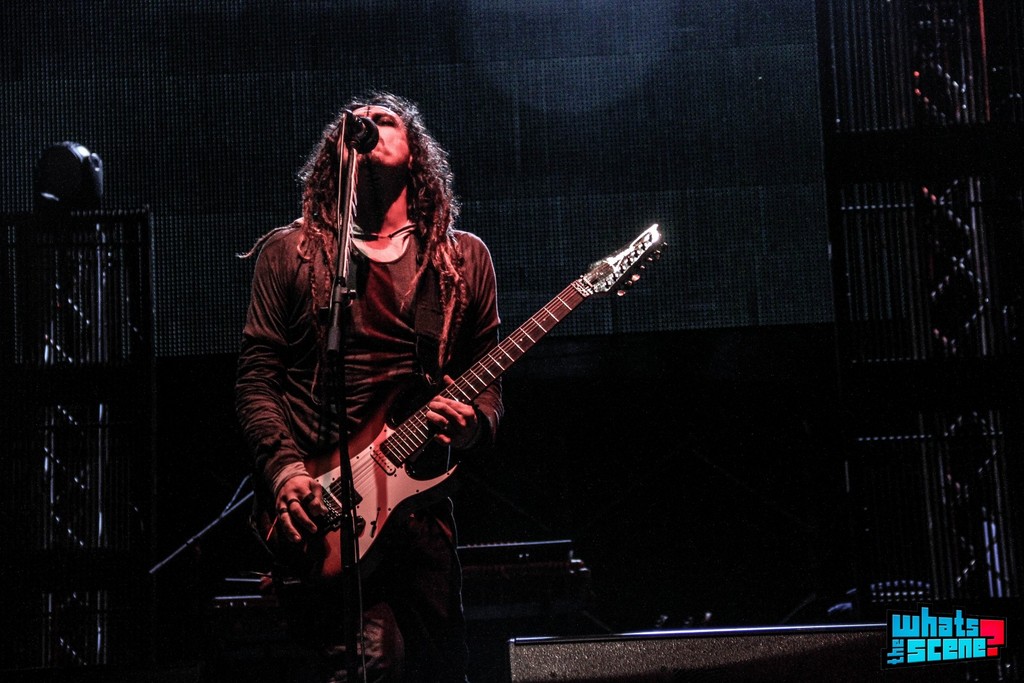 Narcissistic Cannibal, Kill Mercy Within, Chaos Lives in Everything, My Wall, Get Up, and Way Too Far were performed from the album Korn are touring to promote and I was pleasantly surprised at this live rendition of the dubstep record  it seemed far less dizzy and overwhelming, not over-simulated, to me than the CD versions. Inspired by their very lyrics I exclaimed  Chaos didnt live in everything here. In fact, thanks to the switch to dubstep at this concert, the dullness died and we witnessed the rise of the fits and banging of heads. This is where the band took a break, and also around the same time when the management decided to let general sections merge. Thankfully now there were more people around, to feel like a party.

After a rather long break, they returned with the hits, Here to Stay, Freak on a Leash and Falling away from me and then a familiar sound  one of their greatest hits, a cover  the intro of Another Brick in the Wall  I, II, III and the Good-bye Cruel World outro in tandem. We dont need no Korn to excite us really to sing our lungs and intestines out at this one, and so we did  enhanced moderately by one free can of beer (thanks to the premium class) and hugely by the rain Gods coming to the show. The bagpiper too came into play as the band just didnt want to mar the hysteria, the intro for Shoots & Ladders rigged with Metallicas One. Got the Life was another pleasant surprise, making the set running longer than usual. They concluded the proceedings with a well built-up, splendid but deceptively easy drum solo and Blind, followed with expression of gratitude for everyone who came to the show, and especially for Mooz, with lot of hugs and handshakes on the stage. 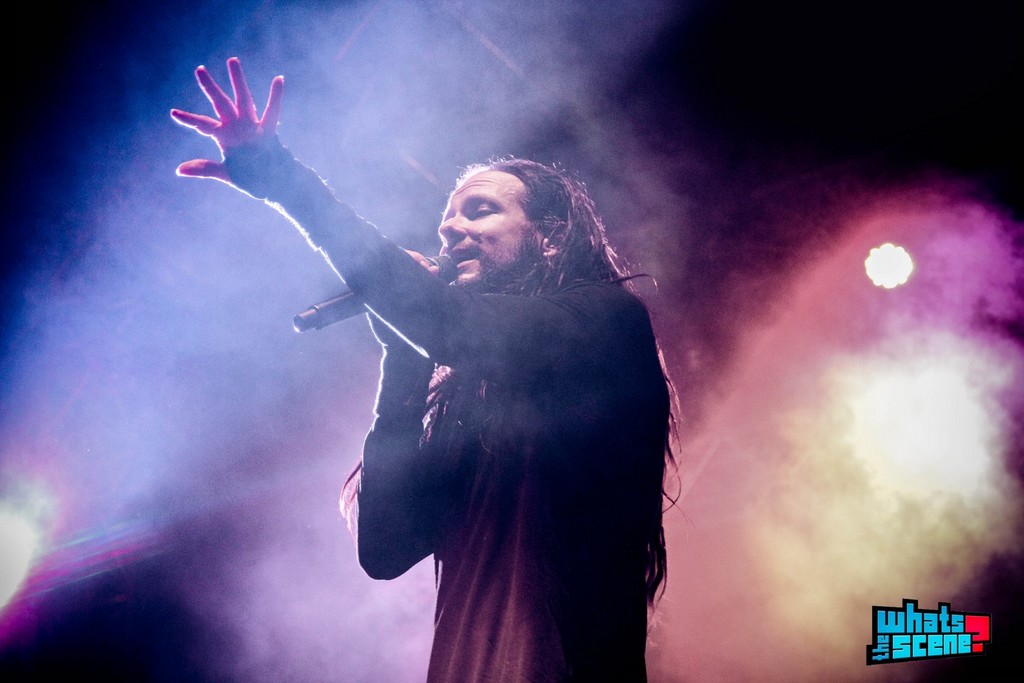 Poor crowd turnout was the only sour thing I remember about the show, but I wont say my interest in Korn has been revived. The curious path they have taken with a simulated totality may make the point that they still have got the life, but will there be no turning back to the roots  only JD knows. For now, dubstep takes a part of him.