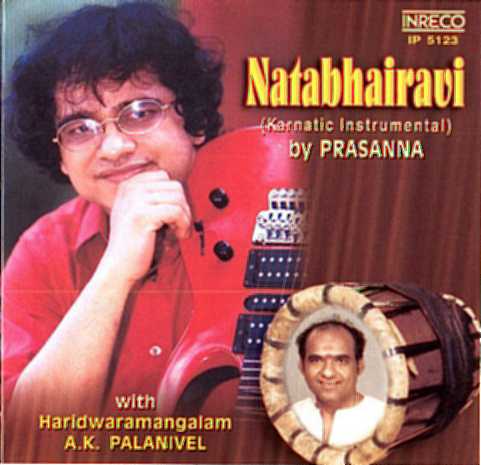 How do you make a carnatic album, pure carnatic that is, and yet lure the average blues-rock fan?Prasanna has the answer here in Natabhairavi. By carefully choosing raagas that have a cool, groovy, bluesy feel, he has made a near magnum opus here.

Opening up with the ‘Varnam‘ (Evvari Bodhana vini) in Abhogi, a pentatonic mode of the Dorian equivalent Kharaharapriya, Prasanna fluctuates immaculately between double time and triplets that are inherent in varnams. There is little soloing in this piece as varnams are strict compositions and are to be rendered with minimal improvs.

The second piece in Nattai, ‘Karimuga Varada‘ is a soulful yet tight jam. Prasanna however lets loose post the charanam(the third distinct melody in the Krithi form), flying two octaves with ease and also quoting in between from the Thyagaraja epic, ‘Jagadanandakaraka’.

Prasanna coaxes beauty from all sides in the third track, ‘Tholi Janma‘ in Raga Bilahari, which sounds like the whole guitar is brimming with immense joy. Khanda chapu, the cycle of 5 beats is charming, complex and groovy, and the accompaniment of A.K.Palaniel on Thavil, and Kaarthick on Ghatam is exlemplary. Bilahari is a mode of the western major scale that has a major pentatonic in the ascent and a major in the descent.

The happiness continues to be the centric theme going into the slower, complex-time Deekshitar krithi, ‘Kamalamba Samrakshatumam‘ in Ananda Bhairavi. Prasanna delivers an inch perfect rendition with minimum improvs, preserving the serenity surrounding the original.

The album reaches the climax in the 5th and largest piece, ‘Sri Valli Deva Senapathe‘ in Natabhairavi, the minor scale equivalent in carnatic. Prasanna drives through the raga extensively, creating tensions, environs and soundscapes with the custom-designed Guru Brahma amps with a violinesque delay to back the sustain. The highlight of the album being Prasanna’s improvs, majestic patterns and the percussion solo. AKP and Kaarthick take turns initially to solo on top of the 8 beat taala, and quietly move into a private battlefield of their own, shooting each other with bullets, arrows and what not, all while maintaining time (unlike western drum solos).

The penultimate track is a soothing noteswara or direct Major scale rendition without much carnatic flavour, ‘Shakti Sahita Ganapatim‘ reminds us of Bach and western influences in carnatic music.

The last track is a ‘Bhajan‘ in Raga Kalyanavasantham that seems to end before it begins.