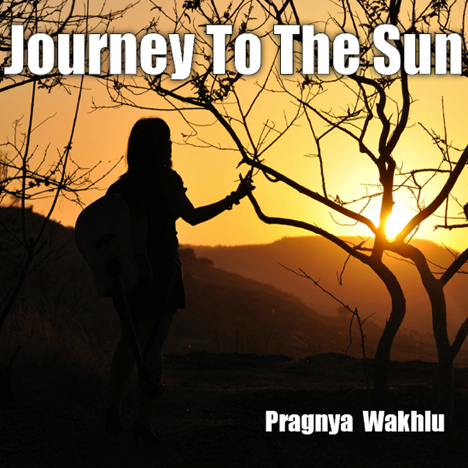 Before I start talking about the album, let me share the thoughts that ran through my mind when I first heard Pragnya Wakhlu. This could well be the start of another solid independent songwriter and performers journey. The sound that this lady offers is different, real, mellow and reminds one of the good old days of Indian pop when it was played with a band. I really wish that more people follow in her footsteps and take up music as a career.

Journey to the Sun is a great repertoire of some really good songwriting and is fantastic in patches. The album opens with the track Dream Catcher featuring Savio Sebastian (from Pune-based alt-rock band Silver). Pragnyas voice has that mystical and seductive element, and she brings it to the fore right from the word go.  I loved the way the song starts; it reminded me of those vintage bands that used to have beautiful acoustic starts. The bassist plays some real lip-smacking fillers in this number. This track is more of a narrative, but boy does it sound good!

The second song is Naïve featuring Praashekh Borkar on the sarod. The song again is chilled out and laidback, something you can play on the stereo and enjoy your beer to on a lazy Saturday afternoon. Pianos, bongos and some subtle cymbal work makes this a really easy song to listen to, however, what stands out is the sarod, which is tastefully executed.

The third offering on the album is Rise. This is my second favorite song on the album simply because the arrangement is simple and the chorus is something that will stay with you. Its characteristic easy vocals make this song a delight. I wouldnt mind listening to it on repeat a couple of times at a go.

The fourth song Flying High is perhaps a letdown after a song like Rise. I really liked the chorus in it though. But you dont always get an album full of great songs; some songs just dont strike the right chord with the listener. This was perhaps one of those songs.

The fifth song, featuring Soul Strings (a folk rock band that Pragnya sings lead vocals for), is my favorite on the album. Its called Free Hugs. This song completely convinced me that Pragnya Wakhlu should sing more Blues. Its as if she was born for this! Not only do the lyrics give me the impression that they were heartfelt, but the Blues just blew me away! I must also admit I am a sucker for Blues, but this song will stand out in my memory for some time to come, simply because of the way it is arranged and built. This for me is the best track on the album.

The sixth song is called Home to Mama, featuring Savio Sebastian again. Pragnyas vocals stand out like a chilled glass of Chavignon Blanc. I guess I can totally imagine listening to this song on Mothers Day. Kudos to the songwriting and the arrangement!

The last track on this album is In the Rain with Soul Strings. I loved this song for the Mediterranean feel. The flutes, the strings, the lyrics, and the way its arranged are what really appealed to me. I think this would be a pretty apt song for a walk on the beach on a day when it is drizzling.

All in all, I would say, Pragnya is well on her way. I am sure with the encouragement she is getting from musicians around the country, the time is not far when maybe we will have our own Alanis, Cheryl Crow and the likes!

People reading this, do give Journey to the Sun a listen for the soothing vocals that form the hallmark of this album.