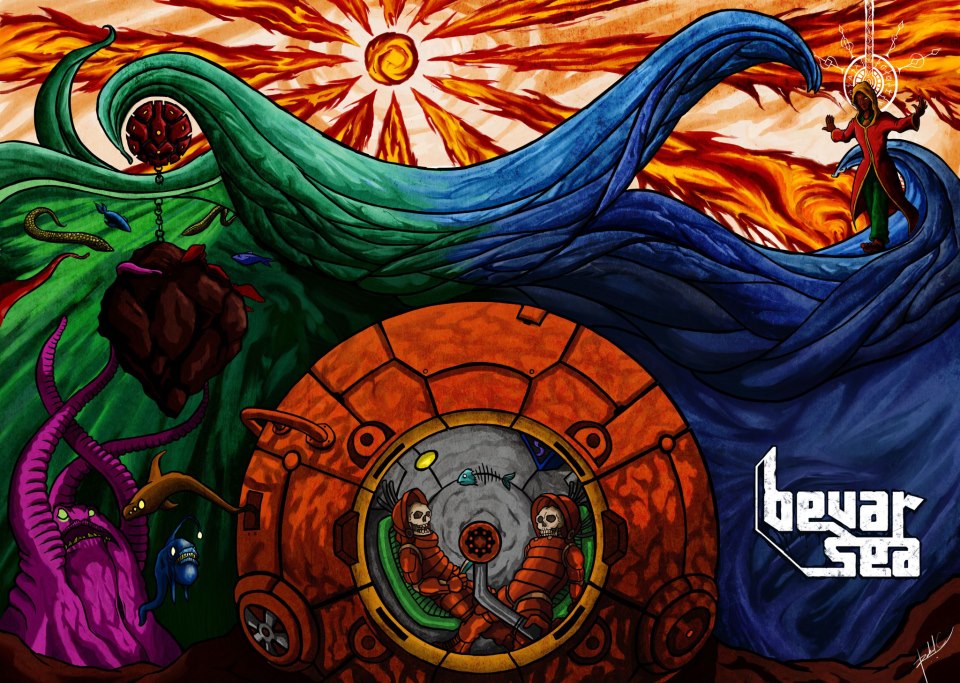 Firstly, to all the old school metal Nazis out there – I am no patron of old school metal. I happened to stumble upon the band Bevar Sea when I was in Bangalore this summer. The name, which means bastard in Kannada, immediately caught my attention. So I went to their Facebook page and was blown away by a lot of their art work, branding and promotion strategies, and of course their music.  This five piece Stoner/Doom metal outfit from Bangalore comprises of Ganesh Krishnaswamy on vocals, Srikanth Panaman on lead guitars, Avinash Ramchandar on bass, Deepak Raghu on drums and Rahul Chacko– who plays the guitar and does all the cool artwork for the band.

The band has been around for two years now and although they are almost unheard of up north, the band is making all the right noises in the city where it matters most  Bangalore. With their self-titled debut album, Bevar Sea has proved that they are no pushovers in the Indian metal space and have, beyond a doubt, played a key role in pioneering the stoner/doom metal genre in India.

The album consists of four tracks – no, its not an EP – and clocks in at a little over 40 minutes and is an intriguing mix of heavy, stoner, psych and doom metal. Srikanth and Rahul competently create thick, heavy tones with their low tuned guitars to create the soul of the song, while Avinash plays some massive riffs in accord to form a bass-heavy wall of sound. Another characteristic of the album is its focus on slow tempos and large amounts of distortion to produce a heavy, grinding sort of sound. However, the most fascinating part of the album for me is the lyrical themes adapted by Ganesh Krishnaswamy in the song writing process. The writing is generally pessimistic and includes various themes of suffering, gore, fear and anger.

The first track of the album, The Smiler, gives you the first glimpse of what to expect in the next 30 minutes or so. Much like the rest of the album, The Smiler almost takes you through a nostalgic journey through the 70s, but the track doesnt fall into the 70s genre: it is no nonsense modern-day music with massive riffs, 70s rock inspired clean vocals and enthused lyrical themes sung with a sense of desperation and despair.

The second track on the album is the anthemic crowd favorite – Abishtu(Brahmin term for a retard). The song is about a dwarfed serial-killing biker who goes around killing hipster douchebags without any remorse. If Bevar Sea gigs are anything to go by, this song already has a lot of takers. Musically, the song retains the characteristics of the album with long groovy riffs, heavy bass lines, minimalist guitar solos and heavy distortions. This song was my favorite Bevar Sea track for the longest time till I heard Mono Gnome.

The next track of the album is Universal Sleeper and the song clocks in at slightly under 10 minutes. This song arguably has the catchiest of all riffs in the album. However, the riff sounds too familiar for comfort. Every time I hear the song I get an uneasy feeling that Ive heard the riff before but still havent been able to put a finger on it. Musically, the song has a bluesy chilled-out feel to it, which adds depth and versatility to the entire album. Lyrically, the song is aspirational for people who like sleeping  which is probably everyone.

The next track on the album is my new favorite and also the album ender  Mono Gnome, which is 17 minutes long. In an era where the demographics of music fans are changing so rapidly and music is being produced according to what listeners want to listen to, hats off to Bevar Sea for writing this song. The song is about a gnome who has an enthralling affair with the devils mistress. This seventeen minute epic ends with the witch setting the world on fire after making love to the gnome on top of a mountain  what an end to a debut album!

If I had to rate this album out of 10, Id give it an 8 because theyve set the bar so high for other Indian bands in terms of production quality, branding, merchandising, art work and even distribution.

I would definitely recommend this album to anyone who has $3 to spare (for digital download, physical copy options start at $8). However, is this the best metal album of the year so far musically? Well perhaps – although I really liked Limit Zeros album too.