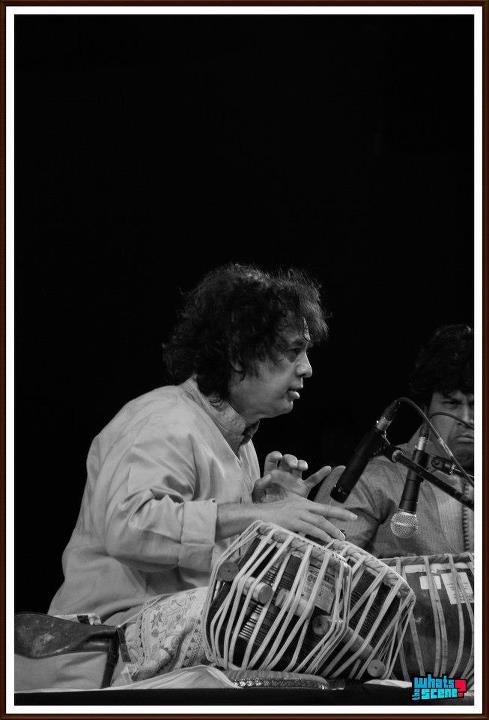 One doesn’t often relate a banjo with a tabla or an upright bass in the same setting. They originated from different corners of the world (the banjo originated from Africa, despite its popular country-ish sound associated with American Folk music) and are associated with styles that seem, on first impression, like chalk and cheese. Ordinarily, one does not see Bluegrass or American Folk music blending in with the groove of an upright bass, set to Hindustani beats from a tabla. But then again, banjo virtuoso Bela Fleck, double bass maestro Edgar Meyer and Tabla legend Ustad Zakir Hussain are not your regular, ordinary musicians.

The 147-year old Bishop Cotton Boys’ School was the venue, on the 10th of February, for the event titled ‘Confluence’ featuring these three pioneers of their respective instruments. An enormous crowd gathered in front of the auditorium at around 6:30 PM, most of them in great expectation of watching the Ustad play.

The event finally started almost 45 minutes late, understandably due to the difficulty in handling a frenzied crowd. Edgar Meyer started out with a short bass phrase and Zakir punctuated it with a Middle-eastern drum sound and Bela followed suit with a progression that segued into their popular tune ‘Bubbles‘ from their CD Melody of Rhythm, which had followed their debut show with a symphony orchestra in Nashville, around 7 years ago. Any doubts of the instruments and styles not blending together were wiped out, as the trio moved as a unit, seamlessly from the familiar opening phrase of the song to Bela’s solo and back, and to Edgar’s solo and back. My only gripe was that considering that this was one of the few groovier songs, this could have been delayed in the set especially since the organizers allowed a few noisy latecomers to pour into the auditorium, staining the experience.

Edgar then began the second song ‘Cadence‘, also from The Melody of Rhythm CD, with a tune in minor scale and Bela countered it with a poignant and minimal phrase that would go on to define a very Indian and solemn setting for the song. But when the tabla kicked in, the song proceeded through a few pleasant and happy-sounding sections before resolving back to the hook of the song, almost like a slow ballet where you can imagine the stage lights darkening, reminding the protagonist of an impending struggle. The musically interesting aspect was that Bela’s style in this song was hardly American Folk or Bluegrass which came to be associated with him. He adopted a drastically different style and he made it his own. Edgar’s slow chromatic arpeggios and Zakir’s differently-tuned dahinas ‘agreeing’ to the opening melody were the other crucial aspects to ‘Cadence‘ being one of the best compositions of the set.

Zakir followed it up with a light-humoured introduction of Bela and Edgar before introducing the guest artist, Rakesh Chaurasia, nephew and disciple of Bansuri legend Pt. Hariprasad Chaurasia, on stage for the third track ‘Happy Drum Drum Monkey Girl‘. Rakesh himself opened the song with a few impressive tunes on the bansuri, accentuating and sustaining wherever necessary. Edgar joined in with a groovy bass line in 5-4 after which Bela added the distinguishing bluesy tune and Zakir filled in the gaps with those little nifty fills that made knees buckle everywhere. Zakir’s solo which made use of some interesting rhythmic variations had music aficionados in awe, keeping up with the 5-4 count. Following this was a solo by Edgar Meyer, which despite visible scale changes, chromatic walks and pentatonic phrases, seemed to lack in its listenability factor. But regardless of the bassist’s reputation, there was a lot of annoying chitchat in the audience. Seriously, what is it with people and bass solos?

The next was an upbeat song in 12-4 but despite the rhythmic jumps and the seemingly tricky time signature, it was effortlessly performed even without the artistes tapping their foot to keep time! Being one of the more up-tempo songs, the solos employed crescendos that the audience duly applauded. After Edgar made some friends in the audience with a knock-knock joke [I’m-a-pilap], the trio performed a Canon in a cycle of 15 beats, again to the surprise of many, without any visible time keeping. The Canon was played with a phase shift the length of the cycle itself, with Edgar leading the way and Bela following accurately in tow. Zakir matched the duo’s chemistry with dextrous improvisations in the gaps. Edgar’s sublime musicianship came to the fore as each time he had to think of melodies in two adjacent cycles and how they match up to each other, producing magical counterpoints! Pt. Rakesh Chaurasia reappeared on the stage and had a slow jam with Edgar before they broke into a pleasant Abhang-like world music piece. The resting place in the song was Zakir’s oriental-style playing, using melodies from the differently tuned dahinas. And then came, arguably one of the high points of the show – Bela Fleck’s solo piece which started on the lines of Hamsadhwani and then proceeded to a few diminished and country style variations. This was one of the solos that had it all – exploration, technique, soul, dynamism and showmanship. Following this was, ‘E’hem in the key of E‘, a slow jazz standard composed by Edgar and ‘The B Tune‘, a standard in four chords; in the latter however, Rakesh’s solo at times did not sit well with the complex syncopation employed.

And then came the highly expected Zakir Hussain tabla solo with all its ebbs and flows, and there did not seem to be any particular sound of the tabla that Zakir had missed! He introduced a sound and then he made a story around it. Tabla players are not supposed to deal with melody lines, but apparently Zakir missed the memo. Using the tuning hammer and of course, his sleight of hand, Zakir even made the dagga sing the opening line of ‘Eine Kleine Nachtmusik‘ by Mozart! And when it ended, needless to say, jaws dropped to the floor amidst a raucous applause! Following two more standards, the artistes were felicitated and the performance came to a close.

There were a few sticking points, however. It was disheartening to see premature departures for a sizeable number of the audience, in the middle of such a great show. Zakir jokingly enquired if we were still around to listen to the last two numbers. The crowd didn’t refrain from chitchatting in the middle of the performances either and some even turned up for the event, an hour into the show. And if this wasn’t enough, following the show, a few disgruntled and self-proclaimed ‘music-lovers’ angrily demanded to be let into the room backstage where the artists had a few minutes to relax after the show. The well-behaved portion of the crowd will want to take back only the music with them on their way out, but sadly they will also remember these untoward incidents.

To end on a positive note, it is noteworthy to mention that as evidence of this performance, the artistes were definitely neither a slave to their technique nor particularly keen on speed to which they noticed the audience’s spontaneous appreciation. Bela’s triplets were simple yet contained the perfect harmonizing notes and one achieves such musicianship and speed of thought only after years of devoted practice. One would be quick to assign the handling of the groove to the rhythm section, but the trio had the musical acumen to share responsibilities and Bela ably provided the pulse to let Edgar and Zakir explore and venture into more improvisational territories. The difficulty of playing an upright bass is often overlooked, but Edgar Meyer proved that he is truly a virtuoso not just as a bassist but also as a musician. Then we come to Zakir, whose playing never ceases to amaze the audience. His beats are often conversational, he finds the right gaps to insert the odd interjection, yet he retains the groove and does not overplay. Even musicians who attended the concert and who do not play these instruments per se will take home a lot of lessons.

An ideal concert is probably one that gives people a lot to think about in addition to the music that they’ll remember for a while. This was probably one of those events.