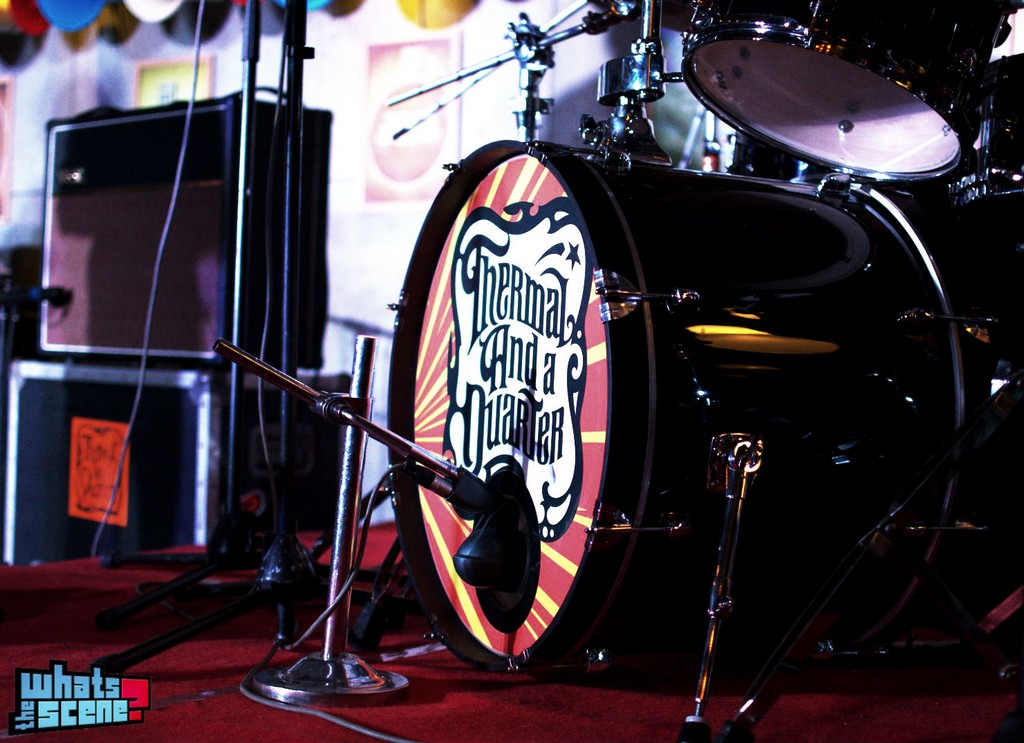 Thermal and a Quarter is a band based in Bangalore, notable for their focus on original music at a time when the nascent Indian rock music industry focused on cover songs, and their innovative use of the Internet to reach out to new audiences. Thermal and a Quarter (TAAQ to the impatient) is: Bruce Lee Mani (guitars & vocals), Rajeev Rajagopal (drums) and Prakash K.N (bass). WTS had an hour-long chat with the band and famous flautist Ravichandra Kulur at Hard Rock Café, Bangalore and here’s what they had to say… 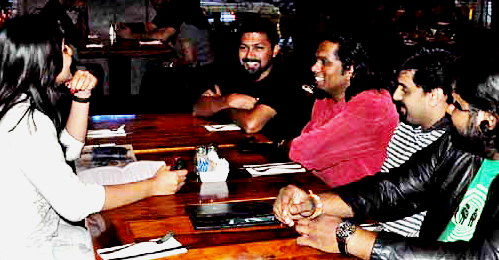 WTS: Your music is truly Bangalorean, yet it appeals to people from other cities as well as other parts of the world. What do you have to say about that?

Rajeev: Music is not limited. Any form of music that’s done with passion, with a lot of love, will not limit itself to one community or one area. It will really transcend to all kinds of people. I remember we played in Cochin once, at a.. it was like a fish market kind of place, with folk people over there…

Bruce: It was in port Cochin, in a place called the ‘Chinese fishing net’ and the majority of the people in the audience there were fishermen. There were probably about five people there, who spoke English as a first language kind of thing… We played an hour long gig. It took a little while for people to sort of settle in but after a while they were all grooving, all of them were like clapping along!

Rajeev: And it worked! It works in a place like HRC where the whole format is understood, it works in a corporate office, in colleges, in different countries…we’ve been to Islamic countries to completely western countries. Any kind of music for that matter! A lot bands come here also, who play different music in different languages, who play only instrumental.

Bruce: Exactly! That’s the whole point of music, music is supposed to transcend! 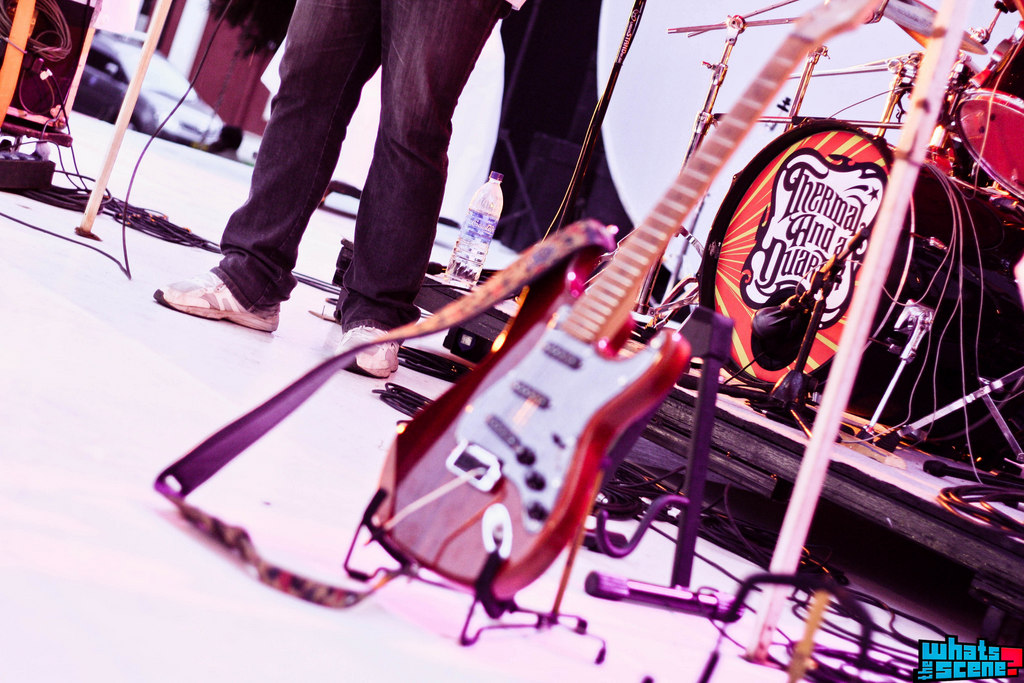 WTS: You “unfailingly surprise listeners and critics alike” – looks like you’d hate to be slotted! Is that a conscious effort you make while coming up with songs?

Prakash: Not really, but then after we’ve made the song we sit back and think, now what is this it has some reggae it has some rock, some progressive parts, so there is no label we ourselves can put to it.

WTS: We thought its Bangalore rock!

Rajeev: Yeah that’ what we call ourselves now!

Bruce: That is our label now! For the longest time, people had great difficulty in categorizing our music. You know… you had to put your CD on some shelf! Where do I put it? Do I put it in jazz, or rock, or pop, or jazz- funk-rock-pop-blues- something? Is there a shelf like that at all? Doesn’t exist, right? So we figured that if somebody had to come up with a label, it had to be us. I think we are a very Bangalore band. All of us are Bangaloreans. We’ve been here for a long time and there is a strong identification with this city and everything it stands for – the hangover British thing, the very cosmopolitan nature it has ,the kind of people who are in it and out of it all the time… so the label that we sort of put together is “Bangalore Rock”.

Rajeev: And actually you are probably the first media/website to hear from the band directly that “Yeah! We’re called Bangalore rock!” So yeah! Good one! This is truly historic! (laughs). 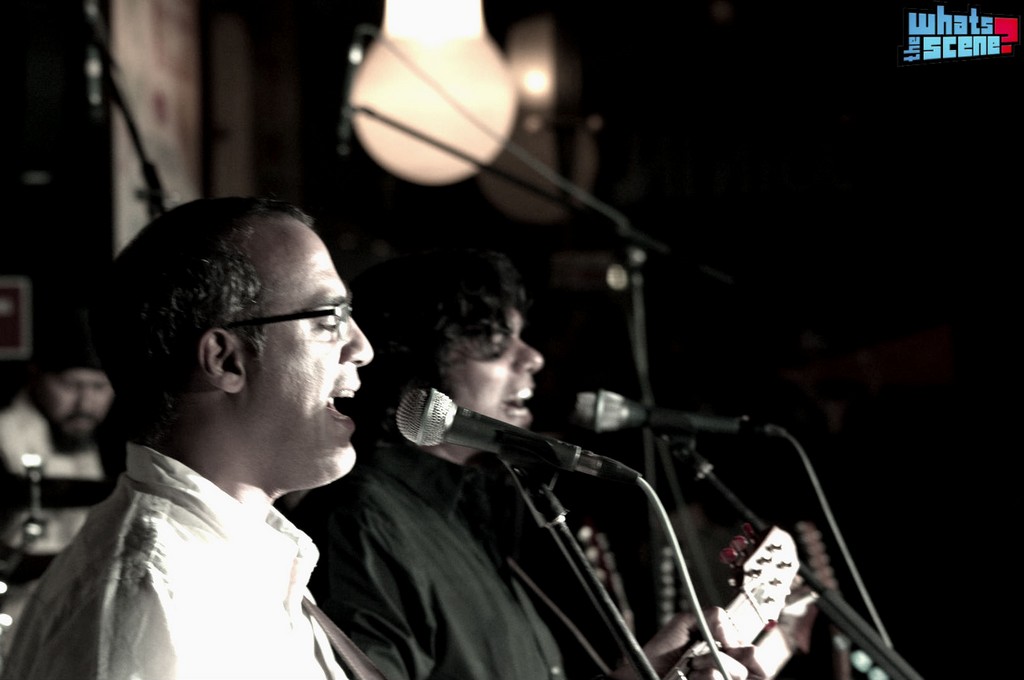 WTS: Rhzude sadly had to part with the band. So how that affected the band and the kind of music you make considering the fact that he was a part of it for 11 years? Must be a big void that he’s left?

Bruce: Ah well! I wouldn’t call it a void because big man is sitting over there right now. I must say he has very, very ably picked up what we do. I think as a band, it’s definitely different with somebody new like that coming in, especially when you had someone playing with you for 11 years, which is a long time by any standard. We are really lucky to be able to play with Prakash. As an accomplished bass player, he’s been able to fit in with what we do almost effortlessly. It’s gonna take a while for us to develop a new sound with him. Right now we’ll have to work out all the old stuff, and then slowly progress to writing stuff with him. That’s happening again organically, which is the way we like to keep it! It shouldn’t be anything forced or put upon. It should come naturally. And that means a lot of playing together and that’s what we’re doing!

Rhzude…well, he was with us for 11 years and it was a choice he had to make, simply because, I guess In everyone’s life there is one time when u have to decide that, “Hey! Am I gonna keep doing things this way, or another way”, and it also depends on what stage in life you are at that time. Rhzude’s much older than the rest of us and we figured that it’s a different stage in life that he’s in right now. It didn’t make sense for him at this point to do this and the job and things like that…it was a call he had to take.

Rajeev: It’s not easy for the band…We’ve had this feeling twice- first when Sunil Chandy left the band. It was suddenly this, “Folks! What’s gonna happen now?” Well, it was much, much more difficult. The beginning of this year and the end of last year… we knew there was a transition in place. It was a tough phase. 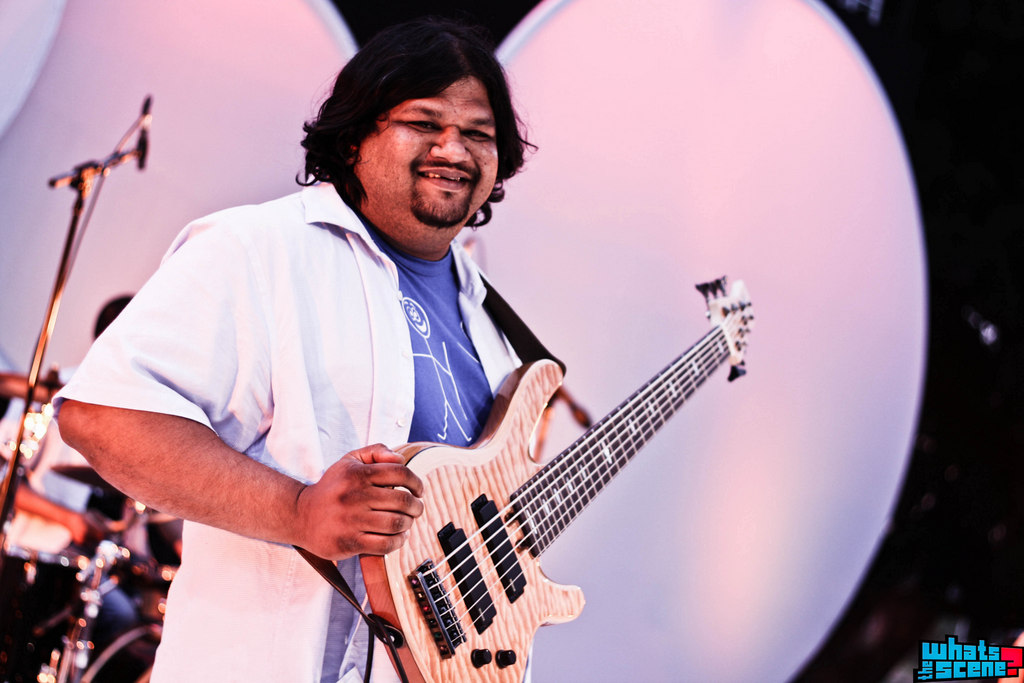 WTS: Was it a spontaneous decision to have Prakash on board or had you guys been planning on it for a long time?

Bruce: When Rhzude couldn’t make it for a few gigs, Prakash is like the first call bass player in Bangalore. People want a bass player, they call Prakash. He’s just the dude. We worked with him a couple of times and it was a good experience. Which is really great! Our music isn’t the easiest kind of music to learn immediately. There we say so ourselves again (laughs)! He was first on our mind. He can probably tell you how he felt. I don’t know if he was like “Oh no! Not them!”

WTS: Quoting from your website, its about one of your CD covers. It says, “The magnificent roach is a metaphor for determined longevity, the stubborn grit to be there in the future” – an impressive analogy – what is that one thing that makes you tick?

Bruce: I dunno…Ravi how many years have u been playing?

Bruce: Wow! Ok! That’s almost as long as we’ve been alive! (laughs) So have there been times when it was really difficult for you?

Ravi: Always! Sometimes it’s great sometimes it’s not very great! It’s all a part of any good musician’s journey. He has the power to go on!

Bruce: Yeah! So there are down times and there are up times – like the cockroach! There are times there when no one’s squishing you, there’s lots of food and it’s comfortable, and sometimes there isn’t and you have to survive! And survival takes tough skin. Takes determination. I think Sting put it really well – ‘It takes this sheer bloody-mindedness’. I just gotta do it. I don’t care! I don’t care what you say, I don’t care what you think. I’m just gonna keep doing it, then you survive!

Rajeev: You know the thing about the roach is, sadly everybody hates the roach. It’s really sad. (everybody laughs) I mean it’s just another thing there! Why should everybody look down upon something that’s so amazing as a creature! You nuke the whole planet and the cockroach will still survive! There are ways to look at things, so that’s how we looked at the whole roach thing! 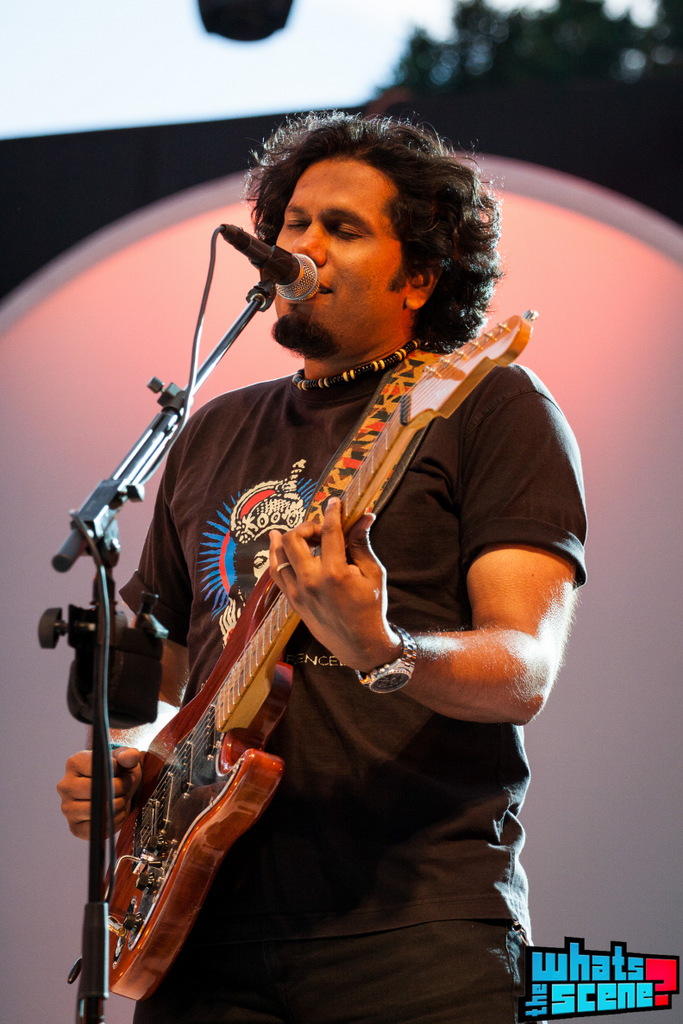 WTS: You guys seem to be a part of a lot of initiatives! Like ‘Shut up and vote’ and ‘One Small Love’. We don’t see many bands doing that. Do you use music as a medium for addressing social issues?

Bruce: From the beginning we’ve always tried to do so through our lyrics! The bands that turned us on, the bands that we all looked up to, they told stories, talked about typical music topics – love, falling in love, falling out of love, rebellion, rock, things like that. People like Bob Dylan, people like…umm… Pearl Jam wrote songs not just about every-day topics but also things that resonated strongly with a social message, saying that this is wrong, it should not be done this way or there’s a better way to do something. Music is very powerful that way! A song can stick in someone’s head and maybe it can change some aspect of people’s behaviour just because it’s so powerful. For us it’s always been important to try and be relevant.

People like Cat Stevens, I can quote from almost any of his songs. He wrote them 40 years ago. But even today the lines will mean exactly the same. They will still be as relevant now as they were then. That is something very special. It’s not something that u can enjoy for 6 months and after that it’ like, “Ah, that’s old!” It’s gotta be something that not just transcends race and language, but also time.

Increasingly in the entertainment industry, the way the people consume music evolved, there is this tendency to go for the short shelf-life but really high selling commodity. That’s what makes business tick, but through all this, there is still this undercurrent of music that’s been selling for the past 50 years and does not stop selling…it’s a small thing but it’s ALWAYS there. And they call it “the long tail” nowadays. It’s like, you might sell very few but you continue selling for a very long time. That just makes sense! I guess that’s what we’re at… we’re trying to be relevant, to sing or communicate in a way that people 10 years from now will say, “I can still listen to that song and it still makes sense!”, and not say, “Oh! That’s so ’96″ or “That’s so ’85!” It’s gotta be “That’s so …true!” 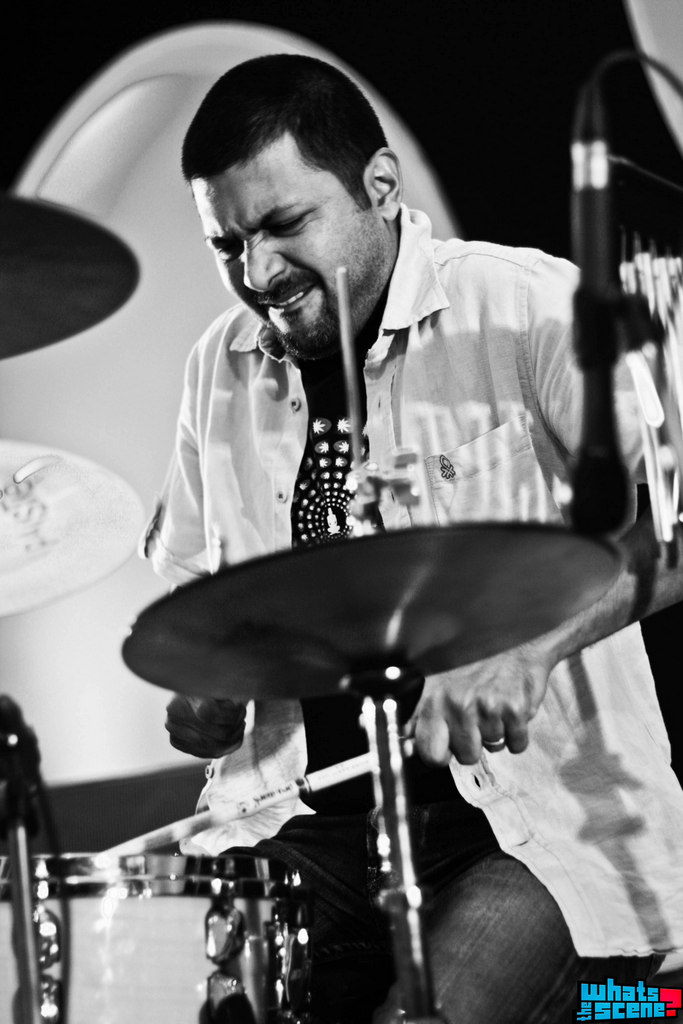 WTS: “TAAQ is not just about the music… it’s a bubbling revolution waiting to take shape.” How do you intend to stir up a revolution?

Bruce: It depends on what kind of revolution you’re talking about! We’re not asking people to get up in arms or trying to tell people to sack their government or do things like that I think the revolution is more in your mind, its about being open to lots of new things. The world is shrinking and shrinking, everybody’s mixing with everyone else and as Russel Peters said, soon we’ll all be brown! (laughs) Increasingly, people have to become more open minded they cannot hold on to racial, cultural, ethical, religious boundaries, they are all blurring and getting more mixed up. It’s sad in some ways, cos some people are losing things that they held close to them but it’s inevitable because evolution takes its own course. For us the revolution is more in your head, to open up and accept and do what you do best!