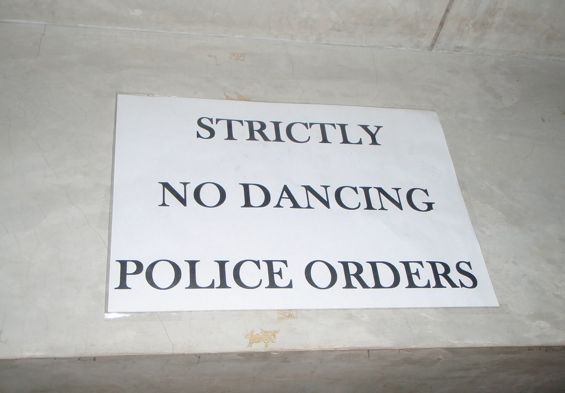 We have no reason to panic  there is no ban on live music in Bangalore. Not yet.

However, Bangalore has been a victim of several illogical and unnecessary rules and it angers me that each time we have had to bow under pressure and conform to them. Despite having more pressing concerns at hand, our local authorities seem greatly concerned about issues like renaming our city to Bengaluru, forcing a ban on dancing in places that serve liquor, issuing notices against loud music, flashy lights and live performances all in the name of preserving our culture.

Apparently, they slot venues conducting live music in the same category as dance bars. I dont wish to make this post a meaningless rant about how immature and irresponsible the local authorities are, but I would definitely love to highlight their ignorance and blatant disregard for something that is an integral part of Bangalore and plays a part in forming its identity  live music.

Recently, some venues in the city (not all of which were places that conducted live music performances) were slapped with a notice that claimed that these venues were using high intensity bright colored lights, playing loud Western music where clients come to drink alcohol, get drunk and dance causing disturbance to the neighboring houses in the locality and they have no clearances authorized in this regard; any such instance reported in the future would result in legal action being initiated as well as cancellation of excise licenses by the higher authorities.

Firstly, live music has nothing to do with dancing women, drunken men and prostitution. To break it down into simple terms, it involves a 3-7 piece band, fully clothed, and armed with nothing more than their musical equipment on a stage, making music. There is an audience on the other side of the room, enjoying the music with food and beverages. There is no dancing involved and no more scope for drunken men to rough up innocent bystanders than a venue that has only recorded music at low volume.

Heres where the problem really lies  today, the legal definition and identity of a ‘live band’ is vague. To avoid categorizing them under dance bars in the future, we must have a clear distinction between the two going forward. Accordingly, the rules have to be revised for live bands and venues playing live music. Venues should be provided with all the details about licenses required well in advance along with complete information about the preconditions of the license allocation, time-frame and the steps involved in procuring the license. The representatives of the live music scene in the city consisting of venue owners and musicians should be given a chance to voice their demands and a consensus has to be reached keeping in mind all the issues that concern them.

Bangalore has some of the most talented musicians and bands in the country and for the live music scene to prosper in our city we must seek amendments to the rules/orders that are in existence to protect venues and bands from suffering at the will of changing governments.

However, it doesnt end there  venues have to conform to certain conditions as well. It is imperative that venues procure the right licenses (public amusement license) needed and maintain a clean image giving little reason for the police to raid the venues or arrest customers. If the cops have reason to think that prostitution has cause to stem out of high-profile places as well as dance bars, then perhaps it is on solid grounds that they are trying to clean it up.

What we really need is clarity from the local authorities in terms of understanding where the problem really lies and cooperation from local venues in conforming to rules provided they are well thought-out and brought into action after reaching a consensus with venue owners and musicians from the local scene.

This article was originally published on Yahoo! – The Water Cooler: Today’s talking points