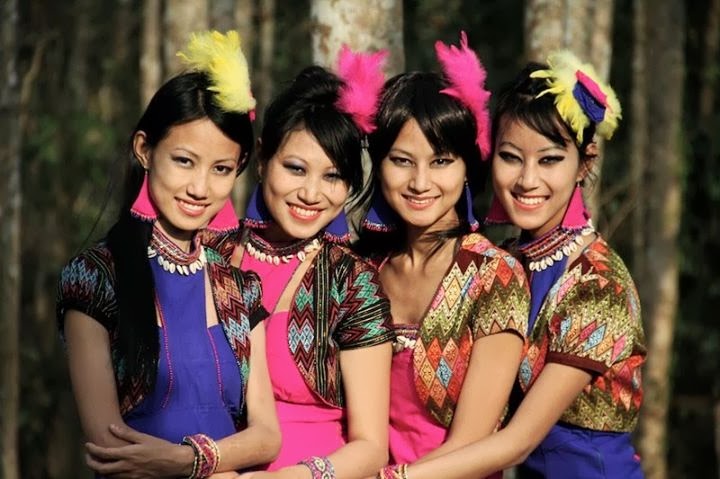 The expansive diversity of India is understood to a great extent, by the multiplicity of musical avatars presented by the seemingly unending forms of cultural creation in this country of contradictions. One such aural phenomenon that may strike many as beautiful, yet unfamiliar hails from the hill-studded state of Nagaland, much of whose traditional cultural practices and interests remain alien to those beyond its borders- a fact true for most of the North Eastern states that comprise The Land of the Seven Sisters.  But Naga songstresses and siblings, Mercy, Azi, Alune and Kuvelu  collectively, the Tetseo Sisters have spent their lives immersing themselves in the nearly forgotten music of the Chakhesang tribe that they have inherited. More so, they have brought the uncharted mysteries of their heritage to the world beyond their immediate own.

Before every song in their live performances, the Tetseo Sisters speak, briefly explaining the meaning and import of their song  a most necessary move, for they sing in the Chokri Naga dialect that has been struggling against a fading existence. As they explain : We perform Li or folk songs. Li is the Chokri Naga word for folk music or folk songs. Chokri is a dialect of the Chakhesang tribe of Nagaland. We perform original folk songs as passed on from our ancestors and some shorter versions too. We have rewritten and rearranged many of the old songs making it our own but the melody and themes are ancient and in its old forms.

However, their tales echo a universal relevance.  We sing about love, seasons, friendship, nature, peace, war and anything that falls between the themes of life and death. Li are stories within stories sung as a song and there is great depth to each song. It is beautiful verses in poetic symbolism and is the historical account of the lives of our people in many ways. Our performances are interspersed with storytelling and translations of our songs so that everyone can participate and enjoy the stories in each song.

The sisters were born into a culture entwined with music. No surprise, considering that Nagaland is the only Indian state with a Music Task Force, a governmental agency for the promotion of music and encouragement of artists.  We have been singing since forever. As far back as any of us can remember, we have been immersed in music. Our parents, family and our people, we are all music lovers so we grew up listening to music, performing and singing, at home, school and church. When it comes to singing Li or folksongs as group of sisters, it was in early 1990s. Lulu was barely a toddler when she performed Li on TV for the first time.

And they are irreversibly devoted to their art :We like to add an extra something to every performance, be it a song or our outfits and we are dedicated to making it a unique experience for our audience every time they come to watch us. We have performed on different stages across the country from clubs to a ledge on a mountain to a 10,000 + strong crowd and exclusive gatherings of State Heads and dignitaries. Every time we go up on stage, we give our 100+ percent. We have been invited to be a part of many events to showcase Naga Culture and culture of the North east states and India. It is always a proud moment to be ambassadors of our wonderful and rich culture.

While some would mourn the loss of indigenous Naga aesthetics in the shadow of American, Korean and Japanese influences (the latter tastes distinguish Nagaland more concretely from the usual Indian interests), the Tetseo Sisters have successfully held true to their roots and opened the world to the power of a centuries-old art form.

But they are not confined by their investment in the past, and welcome all genres and eras. They list flurry of artists and types with the likes of Janis Joplin, Elvis Presley, Yanni, Enigma, Mr. Big, The Corrs, RnB, blues, techno, and even K-pop [ Korean pop] as influences. They wield the Tati, a traditional one stringed instrument, bamboo shakers, mithun horn, tamborines (khro khro) and Naga drums while punctuating their songs with the guitar, piano and violin.

Adorned in the traditional garb of their tribe, these cultural ambassadors of the North-East and its innumerable originalities of custom and creation have been widely received and appreciated. They have appeared on countless stages, their audience ranging from school children in Delhi to those at the monumental Handshake Concert 2012 in Bangkok, the Queen Batons Rally for the Commonwealth Games 2010 at Touphema, Nagaland, the North East Trade Opportunities Summit in Bangkok, Thailand in 2008  or Prince Andrew Duke of York, for whom the sisters performed as part of the festivities commemorating the Diamond Jubilee of Elizabeth II in Kohima on May1st, 2012. They have been featured in numerous events and are regulars at the Hornbill Music Festival, which stands as Indias largest and most prestigious celebration of music in all its plurality.

The Tetseo Sisters have released one album entitled Li: Chapter One: The Beginning in 2011 and are in the process of recording the second, Chapter 2 that will, among other things, lean towards touches of fusion pop. Still brimming with the optimism and a rare authenticity of eagerness, they open to the world a more intimate understanding of the nuances of North Eastern Indias cultural and even genealogical preoccupations, helping to effectively dismantle myopic, generalized, unverified and unexamined assumptions the Seven Sister States that complement Indias claim to ethnic, religious, cultural and quintessential diversity. And their promise of melodic prowess anticipates endless more delight.

Hiyohey! Music is the language of the soul and it goes beyond language and borders tying up lives together. We are happy to be able to share our little bit of beautiful music to the larger fabric of art. We respect musicians of all genres and believe that there is an audience for all kinds of sounds and expressions and that music can change lives. We thank our well wishers for continuing to support us and we hope to keep making and sharing more beautiful music with you all.