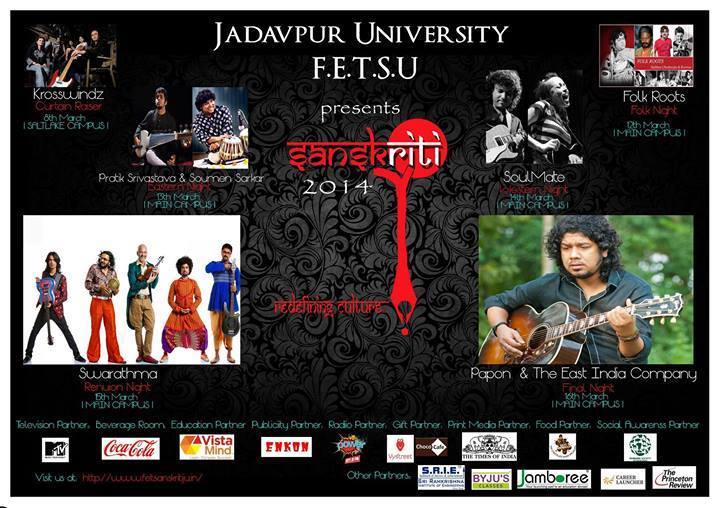 Jadavpur Universitys annual fest Sanskriti has run into an unprecedented hitch in 2014 when they announced the appearance of Soulmate, the iconic blues rock band from Shillong as part of their slew of headlining artists on the 14th of March. On March 12th, Tipriti Kharbangar posted a Facebook status update announcing To our fans in Kolkata….No one has confirmed us about our show at JU but these ppl have already put up posters of ours. How is it possible??? Don’t get fooled!

They werent exaggerating, for both the Sanskriti posters in and out of the JU campus, as well as the official website confirmed Soulmates presence. When we got in touch with Keith Wallang, manager of Soulmate, he said, That image was taken off the web, it is not an official picture. It is completely wrong for anyone to have used that picture in the first place. Rudy is now a Fender endorsee and the guitar in the picture is not a Fender so there again they have screwed up. This astounding portrayal of inefficiency by FETSU (Faculty of Engineering and Technology Students’ Union), Jadavpur University apparently began when event managers wrote to the band who replied with the associated Terms & Conditions. This elicited no further response from the organizers, terminating all contact between the two parties until the spate of advertising began, much to the bands surprise. Understandably, the band will not be performing on the 14th.

While the organizers have announced the cancellation of Soulmates appearance, fans of the band as well as of the fest itself have expressed disappointment, especially because Sanskriti has seen some of the most efficient managerial functioning in the Kolkata entertainment scene. When contacted, Rudy Wallang echoed his sentiments about the matter, Besides being disappointed I feel that for a festival of this stature, the least we expected was some semblance of professionalism. To keep us and our friends and fans hanging on till the very endSomeone didn’t want us there and the buck was being passed around. That’s what I feel. To prevent similar debacles, Soulmate has issued a legal notice, largely exasperated by the fact that the fans get taken for a ride.