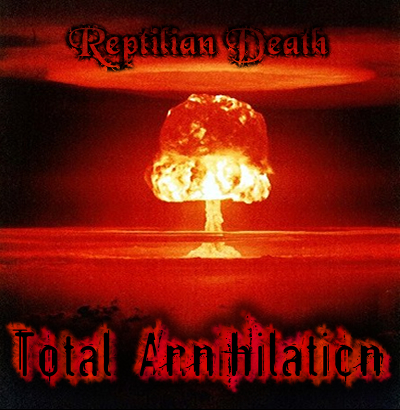 Reptilian Death have offered a free download of their debut album Total Annihilation to mark it’s 10 year anniversary. The album which was released in 2004 is now a decade old and speaking about it, Sahil Makhija says “It’s not a great album but it’s an important one given that it was released in a time where most bands in India were still playing cover music and those who played their own songs were almost at logger heads with the audience to get them to accept their own music. So for me this was something I always wanted to do and that was write my own music. The album has two parts, one being the slightly more serious old school style death metal that RD played as a live band and ‘Nursery Rhymes For Satan’s Children’ which was the more spoofy studio death metal project as RD originally was. The artwork was done by Mephisto the keyboard player of Demonic Resurrection and I released about 300 copies of this on CD-R. The album has been out of print for years now and it kind of made sense to put it out for free download now so that all the kids who are just joining the Indian Metal party can listen to an album that was important in those formidable years.”

The album can be downloaded from the band’s soundcloud page: https://soundcloud.com/reptiliandeath

Reptilian Death released their second full-length album ‘The Dawn Of Consummation And Emergence’ in 2013 almost 10 years after the debut on Old School Metal Records and Universal Music.