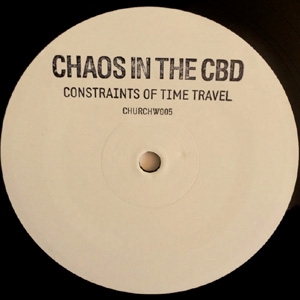 As January draws to a close, the pockets of potential for house and techno in 2016 are beginning to take shape. It’s difficult to ignore the duo from New Zealand, Ben and Louis Helliker-Hales. Last year’s release Midnight in Peckham, under the aegis of Rhythm Section, the ever-growing South London label headed by Bradley Zero, showcases Chaos in the CBD’s ability of habitually creating a smooth, accessible sound whilst also maintaining depth. The single has been hailed by many as an indispensable record in any house collector’s locker and has generated much excitement for their next release – Constraints of Time Travel. This excitement is echoed in its initial support, having reached second on Juno Records bestsellers chart. Released through Church’s white label series, the EP’s aesthetic fits the sub-label’s back catalogue, which has been host to “more melodic” endeavours since 2013. As the title suggests, this release marks a slight deviation from their jazz-infused ode to Peckham, as the two producers turn to some more futuristic sounds; something we’ve not heard from the prolific pair before.

The title track immediately illustrates said divergence, taking the form of a dream-like listening experience, as opposed to a DJ tool. Like many tracks of this format, there are various peaks and troughs; however, these never climb to reach extreme highs or lows. That being said, this piece does not lack direction. There is a constant feeling of steady progression so that the listener is never suspended. In the opening moments we’re introduced to the main motif on a bed of synths and surrealistic bleeps. This is then replaced by a short lived B section, consisting of spaced-out chords and a descending string melody supported by a cymbal driven percussion. The two sections are then brought together as the bass is cut out, leading to a moving final flourish. The B-side holds a shift from the journey-esque title track towards towards some more DJ friendly numbers. ‘Phantom Melodies’ is a marathon, not a sprint. The slow burner sees the pair draw from a more natural sonic palette as they deliver a gentle and fairly linear piece. It is certainly not them at their best, but it is by no means their worst work. It appears to plateau early, with subtle incremental developments. Whilst it purports to have completely unravelled, revealing everything it has to offer, it’s then picked up by sparse vocals and, none other than the signature Chaos in the CBD trumpet – both of which entrench the sedated feel. Warmth and other clear parallels can be drawn alongside ‘Midnight in Peckham’ which are noticeably absent elsewhere on the white label. The difference, however, is that ‘Phantom Melodies’ treads closer to the line between pleasant simplicity and fading into the background.

The first two tracks cover overlapping ground but the final track on the B-side stands alone. If the first B-side is heard on a sun-kissed roof top then you can expect to hear ‘Similar Stories’ as the sun is peering just above the skyline. The groove-laden finale is the triumph of the record as it immediately picks up the pace with a noticeable change in impact from the previous sedated tracks. It showcases a deeper and more grounded feel, evoking a certain darkness we haven’t heard since the pair flirted with techno in Trial Rider.

At the end of the month, Ben and Louis will have released Digital Harmony on Japanese label Mule Musiq. Having entered 2016 in good stride, we can only wait and see if the duo’s potential will translate, adding to the momentum rallied thus far.