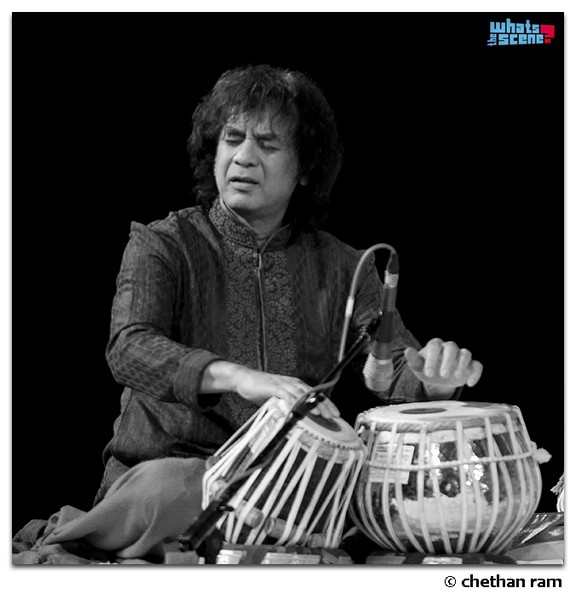 The last time Ustad Zakir Hussain recalls playing a similar concert was with the legendary veena maestro Vidwan S. Balachander, all the way back in 1974. Forty years on, on the 29th of January, 2014, the Ustad took the stage with a disciple of Vidwan Balachander, veena stalwart, Vidushi Dr. Jayanthi Kumaresh and together delivered a performance that could easily last another forty years in memory for its sublime skill, co-ordination and most importantly, beauty. 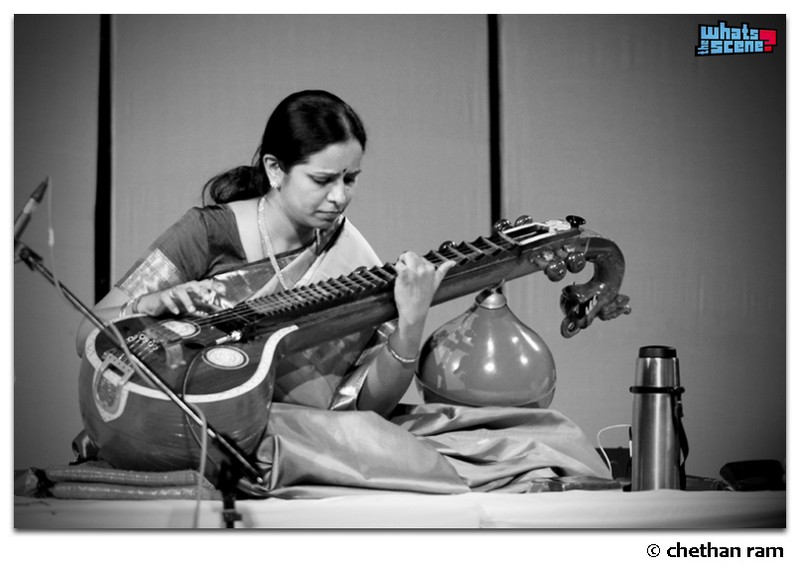 The event was titled Illusion of Pure Sound by event organisers Twaang in Concert, who are also the makers of one of the largest music library app Twaang that promotes Indian Classical music among other non-film music to over 60,000 users globally. By the end of the concert, the audience would come to realise that this was one of those rare situations where a classical event was named aptly.

Twenty minutes off the intended start time after the organizer promo and the introduction of the artistes by the MC, the curtains opened to a glittering view of the artistes on stage  Vid Jayanthi Kumaresh seated centrally and flanked by the Ustad to her right and Trichy Krishnan on the Talam, to her left. Vid Jayanthi started off with a relaxed and downtempo alapana of the evening raga Kamavardhini while also enjoying the freedom to drift into the Hindustani raga Puriya Dhanashree wherever poignant. While it was disheartening to see people still trickling into the auditorium well past 7PM, those already seated were riveted silent with attention to the subtle and soulful treatment of the raga. 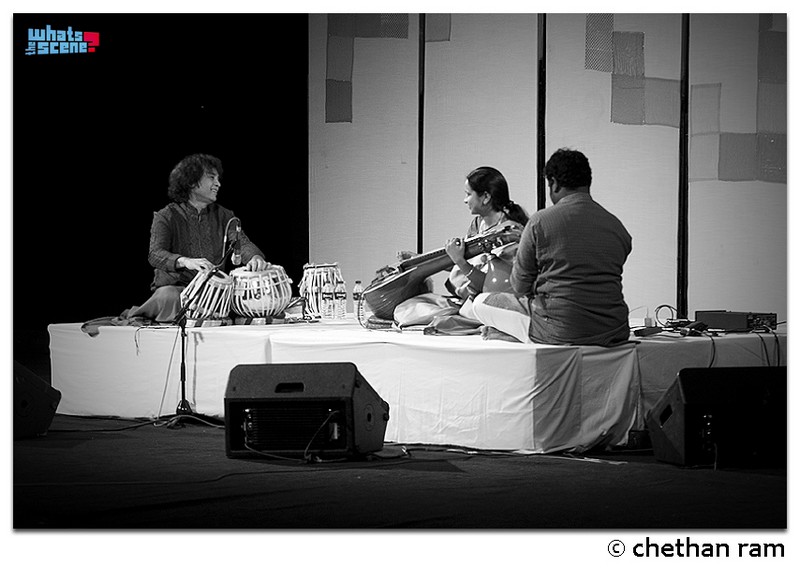 After the alapana, Vid Jayanthi began with a rendition of a Saint Thyagaraja composition, ‘Shiva Shiva Shiva Yana Rada‘ set to Aditalam (Teen Taal) and the Ustad weaved in and out of the intricate sonic patterns within the composition with extraordinary ease. Owing to no other melodic instrument present (Spoiler alert: there actually was), Vid Jayanthi performed kalpanaswaras to the chorus (pallavi) on her own highlighted by myriad variations within one measure of 8 beats (one avarthana) while Ustad Zakir Hussain demonstrated his renowned musicianship by following her lead and accentuating phrases at the right places. The artistes were in perfect sync as was evident from the air-tight stops and control of the volume, especially in the mukthaya towards the end where a crescendo finish awaited the euphoric audience.

The Ustad had mentioned in an interview prior that hell strictly be an accompanist to Vid Jayanthi and throughout the show he stayed true to his word, allowing the vainika to take the lead, which she did in their second piece of the evening through a touching alapana in the carnatic raga Nattai Kurinji (a variation of the Mixolydian mode), complete with natural movements resembling the flutter of butterfly wings and displaying an astounding control over the vibrato. The manner in which Vid Jayanthi had treated and moved notes around had glimpses of the playing style of her uncle, the late violin legend Vidwan Lalgudi G. Jayaraman. 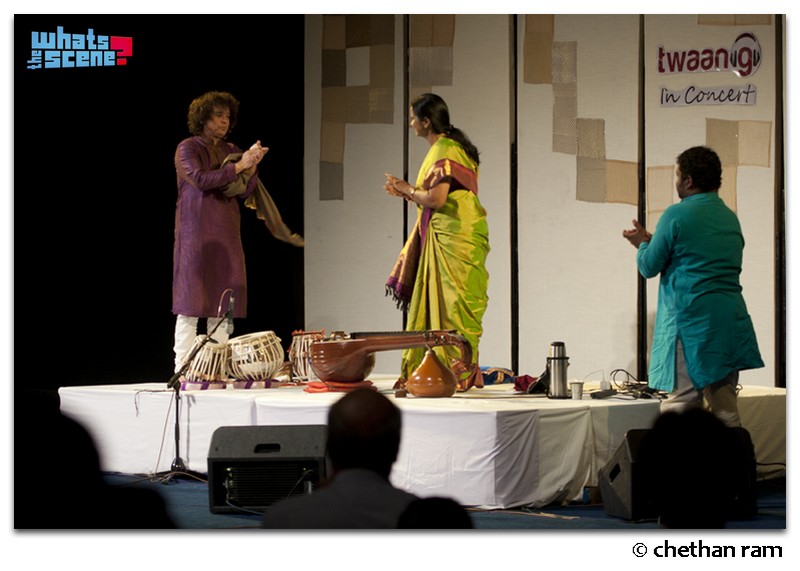 She then proceeded to a rendition of Muthuswami Dikshithars krithi ‘Parvati Kumaram Bhavaye’ in Rupaka Tala while she allowed plenty of pockets for the Ustad to improvise in. More than a leader-follower relation as normally is the case in conventional Carnatic, the music exhibited a relation between two close friends in a very intimate conversation. Another neat surprise was in store, as the composition switched from having 4 notes per beat, to 5 (khandagati) and the shift was masterfully seamless. An explosive improv section followed where a mukthaya again built up to what seemed like the end, before segueing to what the audience had waited for  a Zakir Hussain thaniavarthanam.

The Ustad took his time with his solo and infused it with a storyline of sorts by introducing characters in the form of recognizable phrases. The audience present among whom were noted percussionists Vid Ghatam Giridhar Udupa and Vid Arun Kumar, distinguished flautists Pt RavichandraKulur and Pt Pravin Godkhindi and dynamic violinist duo Vid Ganesh and Vid Kumaresh, oohed and aahed at not only the energetic and speedy sections, but also at the sheer fluidity of the story through its climaxes and anti-climaxes. A brisk mukthaya brought the second piece to its conclusion, amid a tumultuous applause. 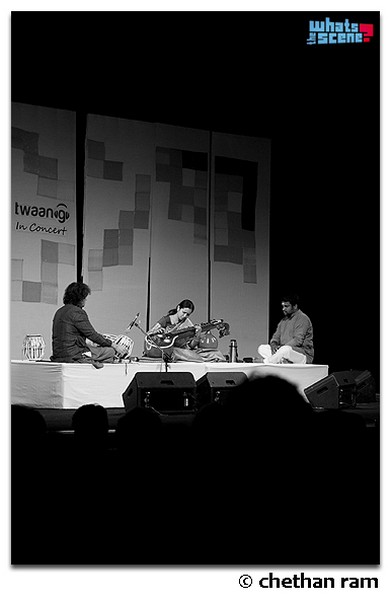 The central piece of the concert was a conventional Carnatic Ragam-Tanam-Pallavi. Vid Jayanthi rendered an alapana in the raga Keeravani (Kiravan in Hindustani or the equivalent of Harmonic Minor scale) and caressed it with her grace and elegance. Space and time seemed to stop by and take notice as she made the raga her own and the audience acknowledged a moment of dexterity as she produced sounds of ripples on the veena by only using her left hand. More than a focus on speed, Vid Jayanthi successfully produced an illusion of the sound coming in from many directions and from all possible distances. The audience made their admiration known and she took their ovation as a cue to adeptly drift into a tanam of increasing tempo, where she made use of rhythms commonly observed in nature like the gait of horses, frogs and elephants.

The highlight of the composition that followed in Adi Tala was a rare jugalbandi between the veena and the tabla which had taken the role of the second melodic instrument as the Ustad effortlessly churned out Keeravani phrases (were still talking about the tabla here) in responses to the ones Vid Jayanthi had raised and like the previous piece, a very elaborate mukthaya peppered with precise rhythmic co-ordinations and movements ended the song on a high note before proceeding to another Zakir Hussain tabla solo. 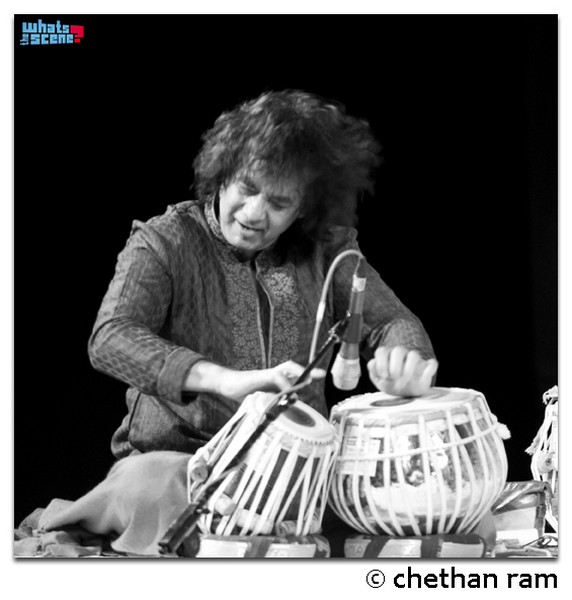 The second tabla solo of the evening had it all. If Vid Jayanthis alapanas provided an illusion of space, the Ustads gave an illusion of multiplicity. Complete with multiple rhythms, grooves, phrases, a sotte voce bassline and audaciously an improvisation section all running simultaneously, the solo evoked gasps from the audience who struggled to believe that a single tabla set was the source. Even within these sounds, the maestro had the time and the temerity to mimic the Doppler Effect and to be versatile enough to adopt a very classical mridangam style too. If there was still any doubt that the audience were witnessing one of the greatest percussionists of all time in his element, that was erased somewhere in the middle of that grand solo. After a pulsating end, the artistes acknowledged the standing ovation that lasted for a good minute and a half.

The encore performance was a Behag thillana in tisragati (3 notes per beat) in Aditala and despite it being the last piece of the show, the artistes did not let the level of the performance drop and the crowd recognized and appreciated their devotion.

It was important to know that in addition to the pure love and devotion to the instruments that the artistes had, both had perfect posture and efficient techniques which are some reasons why they keep getting better with age. There is no doubt that despite their success and longevity in the field, the effects of daily, dedicated practice is very visible in their playing. But in the light of the nights events, none of the artistes sacrificed soul for speed, beauty for technique.

The organisation of the event was expertly done and there will be an anxious wait for Twaang in Concerts next event. Makers of a classical music library app stepping out of their conventional line of work to organise such unique events is a huge step in the right direction for Indian Classical music.

Lastly, despite the event headlined by two worldwide acclaimed artistes, there never was a moment where it felt like a competition; such was the humility and integrity that they had carried themselves with.

No one but music was the big winner of the night.

Yamini – From Dusk to Dawn