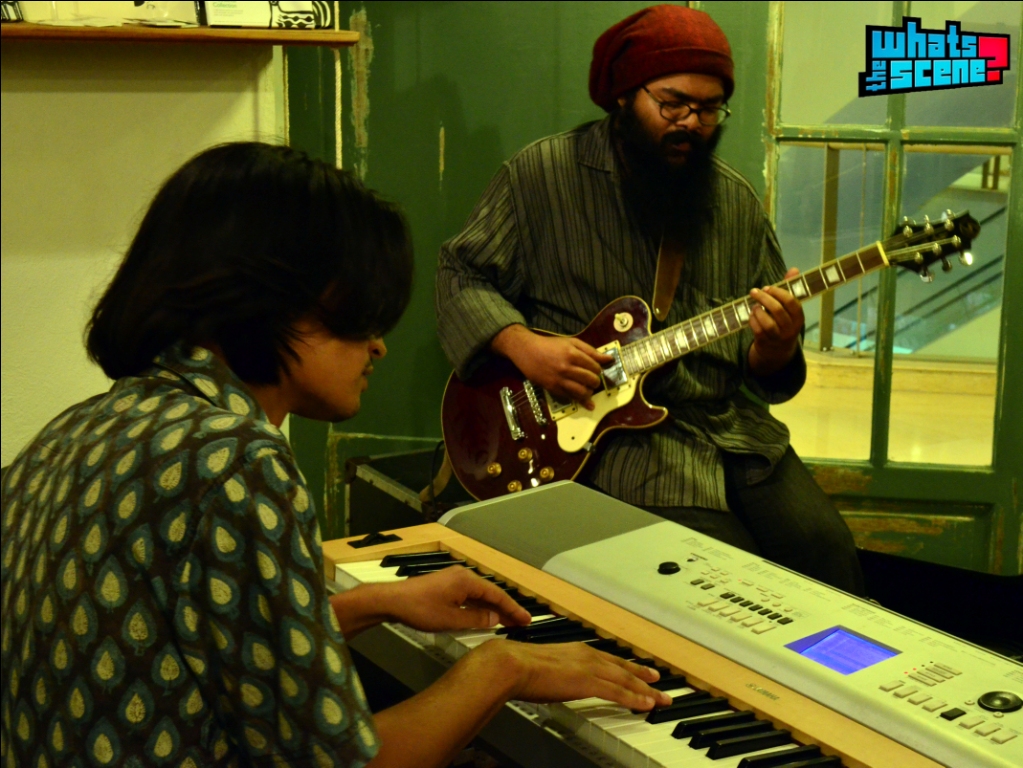 The poster read – Jazz Sessions at The Plantation House, Leela Galleria. It seemed all normal to me – a jazz gig probably at one of The Leela Palace’s posh restaurants, perhaps with a garden! On reaching the venue, I went up and down the Galleria looking for my posh garden restaurant, until I saw Aman Mahajan and Arjun Chandran in a clothes store.

I assumed they were buying clothes, and found the idea of purchasing clothes ten minutes before a gig rather bizarre, but that was only until I saw the keyboard and the amplifier in the shop. Turns out the clothes store was in fact the Plantation House! The store is a lovely little space themed as a sort of old-Bangalore shop with vintage looking wooden walls, soft lighting and surprisingly good acoustics. It has a lot of free space and one corner of the shop was dedicated to the musicians. 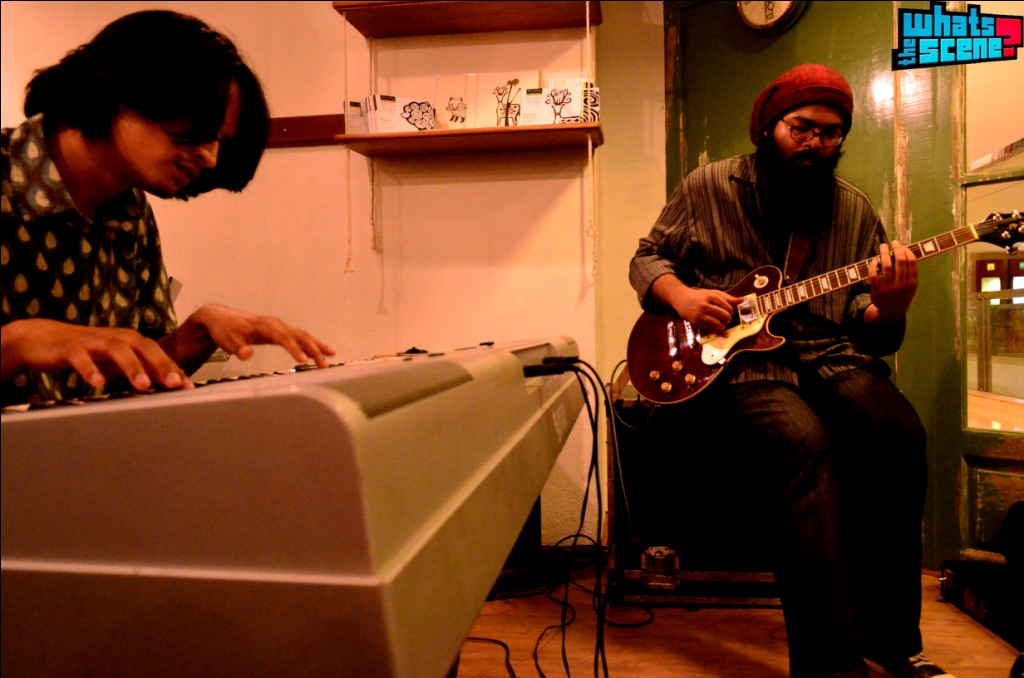 I walked in, apprehensive and feeling a bit out of place. The musicians plugged in their instruments, and with the first note itself they slapped the apprehension right out of my system and out of the store. Suddenly, the whole thing seemed to fit right in place and make sense! Visitors came in and left as they pleased, a few stayed for most of the gig and some even shopped for clothes. And let me add that this in no way seemed like a business trick to attract customers. It was clear that the focus was on the music. As Shalini Subramanian, the owner of the store explained, this was her little underground venue for musicians to play without the clatter of glasses and plates. 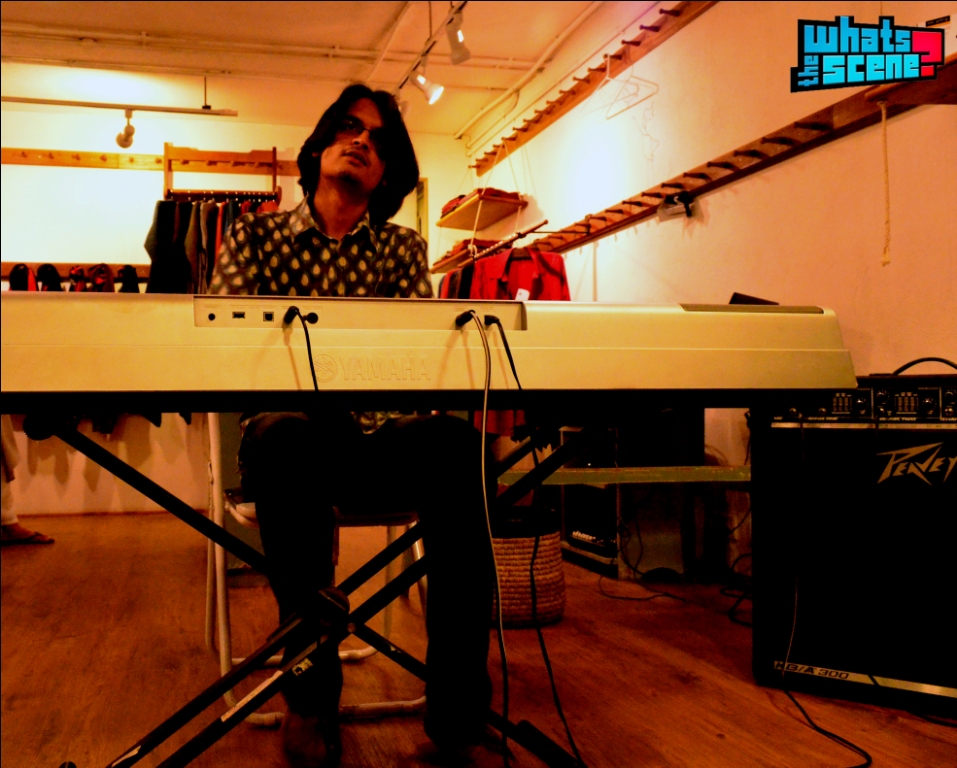 The gig started with Aman Mahajan playing the piano intro of ‘Blue Monk’, a very easily recognizable jazz standard by Thelonious Monk. Arjun Chandran kicked in with the most beautiful guitar tone possible. It was the perfect jazz tone, soft but with just the right amount of zing to accentuate all the nuances of his picking. As they both played solos and complemented each other with delicious walking basslines, it was clear that these guys knew their jazz!

This was followed by a few famous jazz standards including ‘Someone to watch over me’, ‘Solar’ and a fast paced rendition of ‘Oleo’. ‘Straight, No chaser’ had a really free and beautiful intro from Aman that went into a very soulful solo. All the songs had extended improvisational sections and both musicians showed tremendous command and also depth of emotion in their playing. Arjun Chandran played the archetypal jazz guitarist for most of the time, but every now and then, one could hear some BB King or Muddy Waters slip out of his fingers. 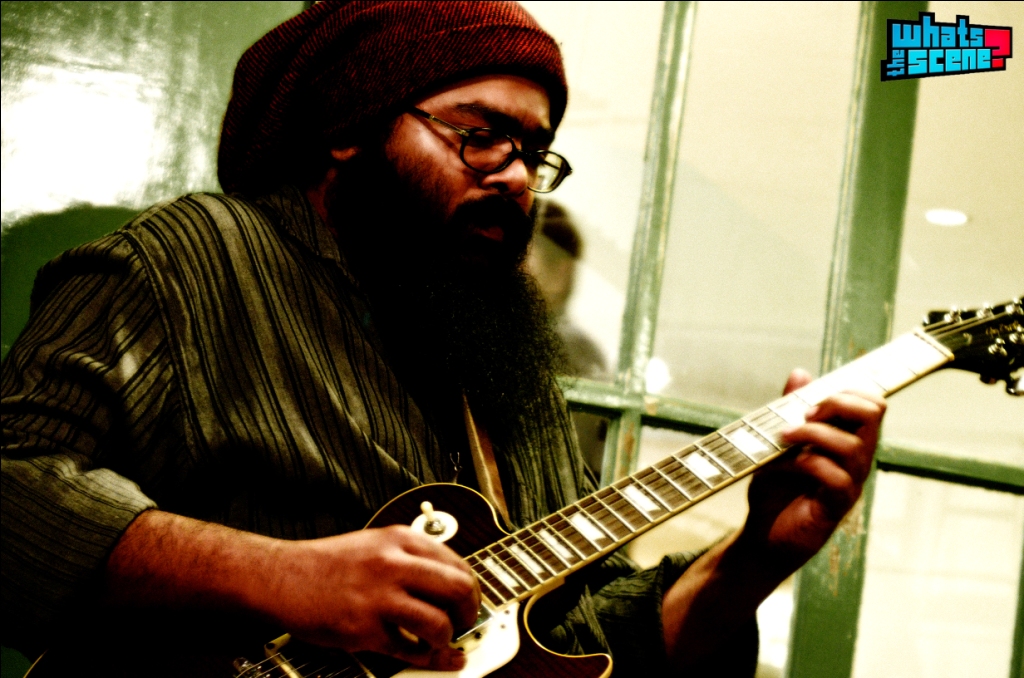 Many of the songs were spontaneous jams, bearing names such as ‘Let’s play something nice and then build it up and see where it goes’. What was incredible to watch was that the jams had many key changes and intricate rhythms that they effortlessly communicated with each other. There was great chemistry between the two which made listening to them all the more exciting. Their rendition of ‘Autumn Leaves’ was so filled with emotion that even the clothes seemed to be swaying to their sounds!

Apart from the music, I found the Plantation House to be a great venue for the quieter gigs. Though the gig was intended to be informal, it would be nice to see gigs here with more structured setlists that would make people linger around longer. But, overall, it was a good gig and an innovative idea that has the potential to turn into a popular concept for a gig in the Bangalore live music scene!