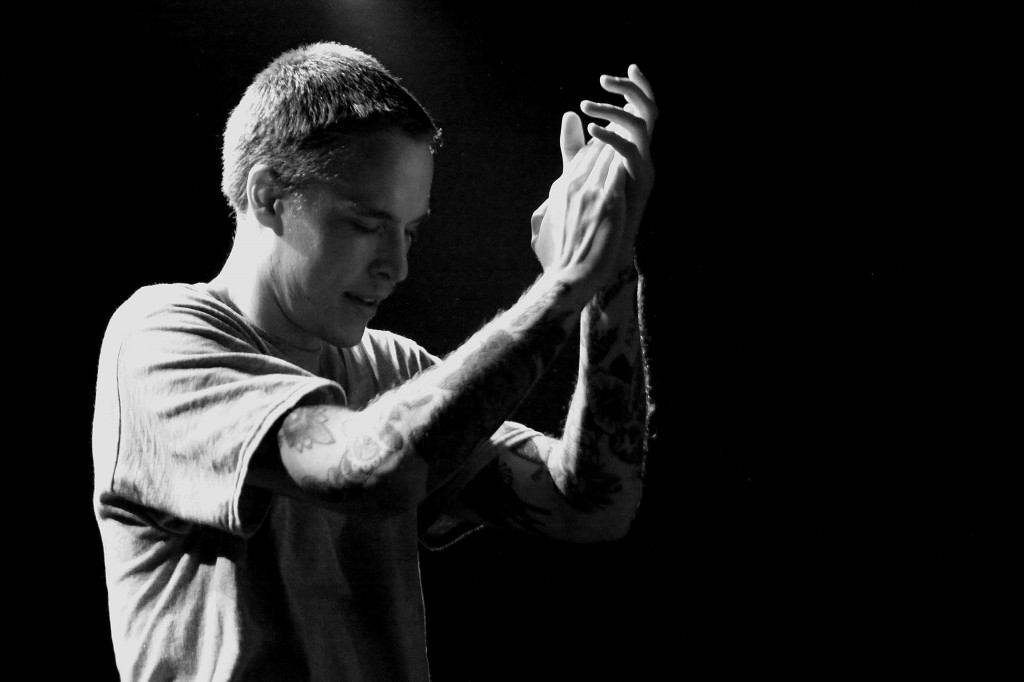 “Youre 2 years too late for that” chuckles Parker Cannon, lead vocalist with The Story So Far, in response to yet another plaintive cry for them to play early fan-favourite ‘680 South’. It is a very different band that stands before us this evening compared to the one which put out those early demos; surely Cannon and Co. couldnt have predicted as they recorded (whilst high) those early tapes that they would be heckled to play them from a stage thousands of miles from their home? Yet here they are, stronger than ever and headlining one of the best bills of the year.

As was the case with the Chunk! No, Captain Chunk! gig last night, the pop-punk masses were queuing round the block well before doors for the show. I always love it when people turn up for the support, and it makes a real sense of community out of what could simply be another badly assembled bill, and up first on said bill were the slightly incongruous Drug Church. Taking to the stage in a whirlwind of neck tattoos and unbuttoned shirts, Drug Church ploughed straight into a barrage of cacophonous noise over which lead vocalist Patrick soared. Half sung, half shouted the band seem to defy the artificial boundaries imposed by genre (and not in a lame, indie way either). Channeling the aggression of hardcore into the instrumentation of shoegaze, the result sat somewhere between the thoughtful noise-making of Title Fight and the humorous indie-punk of British stalwarts Art Brut. Peppering the set with amusing anecdotes, Drug Church easily won the hearts of the masses despite the best efforts of some hardcore kids intent on moshing at the most inappropriate junctures. Up next were the hottest property in hardcore today, Turnstile. From the first note the slam pit opened and was soon full of kicking, careering hardcore kids. What the Baltimore crew lacked in musical prowess they more than made up for in the precision of their groovy rhythms and the intensity of the performance. Vocalist Brendans frequent attempts to get the crowd to sing by throwing them the microphone were rewarded with some mass singalongs, whilst the chugging breakdowns elicited the predictable explosive response from the pit. Lyrically relatable, musically explosive and born performers, this ragtag gang of Baltimore misfits may well have stolen the show from under TSSFs feet. The Turnstile hype is fully justified, now lets have them on a nationwide headline tour of some more intimate venues. With the crowd at full hype it was time for the evenings headliners, The Story So Far. Launching straight into the immediately recognisable riffery of ‘Empty Space‘, the crowd-surfing and finger pointing was instantaneous. Standing clutching the microphone stand for much of the set, Parker Cannon hardly cut an imposing figure, and the band as a whole were shown up a little by Turnstile with respect to showmanship. Whilst Freaky Franz, bassist of Turnstile, was a ball of energy and spent more time jumping around than playing, the boys from TSSF were a lot more sedate. Yes you might get the riffs right, but were here for a punk rock show right? To be fair this barely mattered, as the crowd were more than capable of carrying the show on their own. The tempo barely let up as the Californian boys raced through a set that, to my personal relief, leaned heavily on older material. ‘Clairvoyant’ made for some seriously good singalong material, whilst the intensity of songs like Roam and Quicksand was undeniable. Turnstile might have brought the show this evening, but the crowds love of the boys from Walnut Creek is undeniable (and is surely humbling to a band who famously call themselves just a band).

Some might say that a bill this diverse is a risk (encompassing most points on the alternative music compass), but to judge from the crowds reaction the booking is entirely justified. Its also nice to see such a diverse crowd, and such a young one too. If tonight proves one thing, its that heavy music can be accessed by all, and is an indicator of a flourishing and thrusting scene.