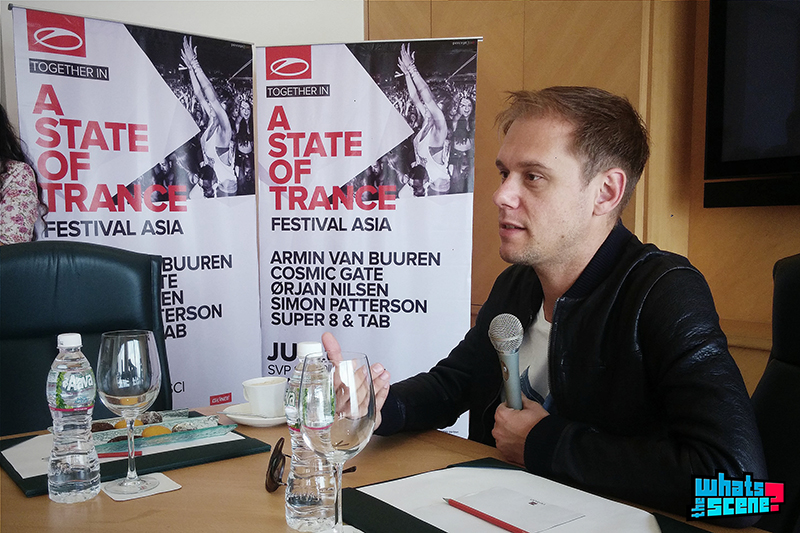 The first thing that strikes you about Armin van Buuren is the powerful positive vibe around him. Dressed in a plush black leather jacket and washed jeans, he walks into the rooftop conference room of Trident and even the panoramic views of marine drive in the afternoon sun can’t hold your gaze as it inadvertently travels to the man. Once he is in the room, he has everyone’s attention.

So gentlemen! We. Need. More. Money. We need gigs to be bigger, he announces. Why don’t you guys work harder? Just kidding! Welcome everybody, lets start!

Read on to find out which character Armin thinks he is from Game of Thrones, his thoughts(or none) on Mat Zos scathing Twitter comments and his clarification on how he never said he wanted to try Dal Makhani in an email interview with a certain leading Indian daily. 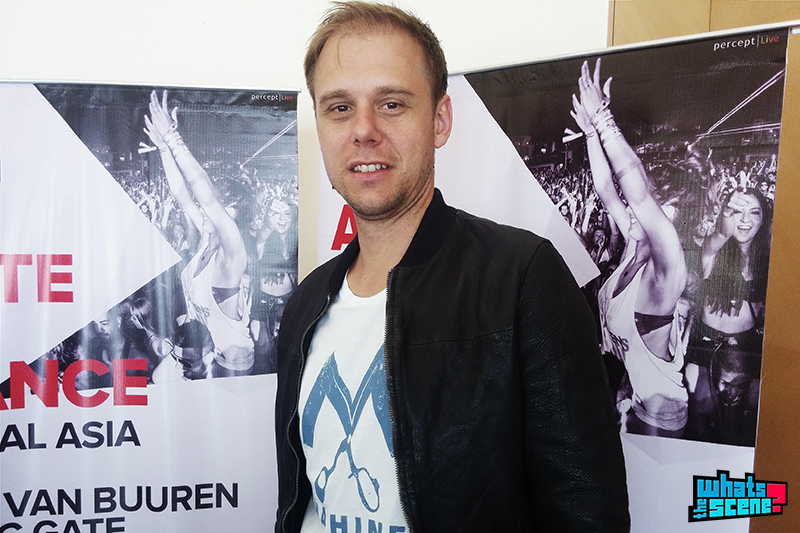 What does a normal day look like for Armin van Buuren?

AVB: When I’m travelling or when I am at home?

Tell us about both.

AVB: When I am travelling my days are spent very differently obviously. When I am at home I have children to look after, you know. My son and daughter, they need to be fed, bathed, taken to daycare or to grandma. I usually get up very early in the morning, because the kids wake up pretty early. So my schedule has changed from late studio nights to early studio mornings. I usually reach the studio around 9-9:30, work alone or with my studio partner, we work on all my music together. We have coffee, work more, we have lunch, finish around 5, go pick up the kids, play with them. In the evenings, I usually have to back to the studio to work on the radio show or I go work out. I should spend more time with my wife actually.

What has been your biggest inspiration in life?

AVB: I think life itself! It is a little bit complicated to answer that one, there is no definite answer to it, you know. But musically, my biggest inspiration is usually other music that I really like.

Any video games you love?

AVB: I really like Destiny, but I haven’t touched my Playstation in a couple of months, I have just been too busy.

AVB: Ummm… somebody from the Stark family I think.

You have performed in India before. Did you get time to go sightseeing?

AVB: I wish! I mean I have been here a couple of times, but when I go sightseeing I really want to have my wife here with me. I don’t really enjoy sightseeing on my own, you know. Or with my tour manager, because he is usually busy, we are always buying shoes.

A few days back we came across an article in a leading Indian daily, which mentioned that you wished to try the Indian dish Dal Makhani…

Tell us about the influence of EDM on Trance in current music scenario.

AVB: I play music because I love music. Right?  I don’t care if it’s EDM or Trance or Dance, you know! But I do like that fact that production techniques are constantly evolving, new sounds are being developed, new plugins are being used, so that for me is really inspiring. I don’t really look at one particular style or genre, it’s more of a feeling I try to bring across and many people like to call it Trance. That’s a sound I really love, and I get influenced by all the new producers that bring new sounds. The problem with genres is that there is a lot of music, and usually the best tracks, or tracks that move the scene forward, can’t really be captured in one genre. That’s why I find two whole discussion about what is EDM, what is Trance, what is Electro (futile)… because everybody seems to have a different definition of it all the time.

What do you think of the underground Trance scene as opposed to the mainstream trance scene?

Mat Zo has been talking about… 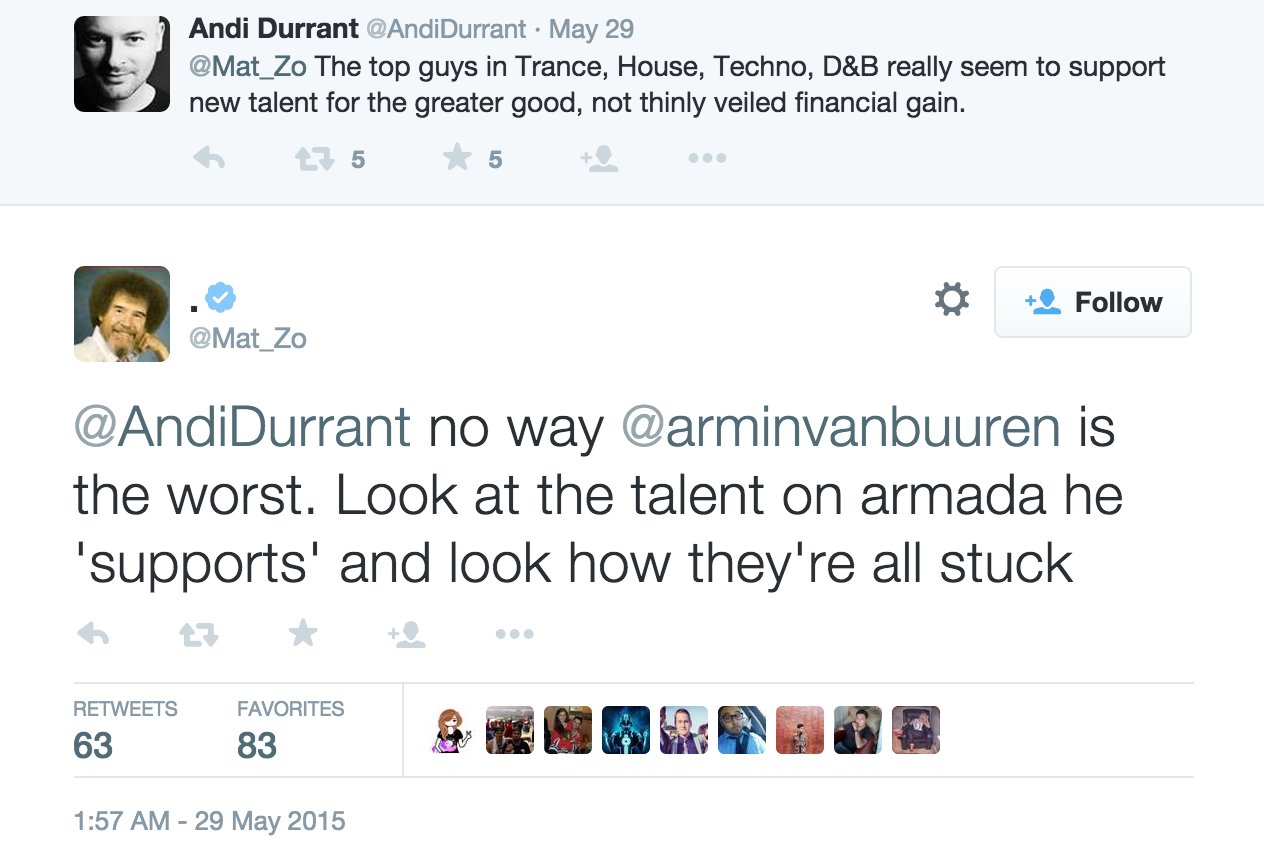 How do you see the present Trance music scenario across the globe, and what factors are making a difference?

AVB: Well, at the moment for me, if I look at my weekly radio show for example, I see that there is so much great new music coming. I have always said to myself that if I wouldn’t like the music or if I wouldn’t feel the emotion and I wouldn’t find the stuff that puts me in, you know, a state of trance, I would stop the show. But at the moment there is so much great music coming out. I have a hard time, a really hard time, every week to make a radio show; not because I don’t have enough tunes but because there are too many tracks. Every week I have about 50-60 tracks that I want to play, but I end up playing 30-35. Right now there are so many producers making Trance, and making great sounds, and there is a big development in everything which is very positive.

AVB: I found that with the change in music over the years, some producers abandoned that sound. Everything had to be 128 bpm or 130 or 132 all of a sudden, whereas a lot of DJs were playing a lot faster back in the days. I’m not judging by the way, I’m not criticizing, I am just saying that there are a lot of great tracks at that speed and I thought that they are a little bit put away, you know. So I just wanted to start a label that was home to that kind of sound, because so many DJs moved away from it and I still love the sound. It is not the only sound I play, but I just love that sound. Again, I’m not criticizing anybody specifically; I think every DJ can do what he or she wants.

ASOT666 was way beyond imagination. Will we see something similar soon?

AVB: I wanted to do something devilish with that episode, something different. In the future, we are looking forward to do other themed episodes. We have done a couple actually, not just the 666 episode. Yeah, there is a high demand for Who is afraid of 138? themed episodes, so let’s see. If I have enough good music, then who knows!

Some people call the radio show underground, while others call it mainstream. When you first started it in 2001, what did you envision?

AVB: I want ASOT to be home for all kinds of Trance. Back in the day you had one particular sound, but now you have all these sub-genres. If you look at my sets from 2001-2002, you can see I played a lot of progressive stuff, right up to the 138 sound. Basically, the formula of the show hasn’t changed that much, I just think that the sound has moved on a little bit. Through ASOT, you get a window to look at what my vision is on the current state of Trance.

Did you imagine the sort of success you would have? Almost every week ASOT is trending, and you receive a lot of positive messages on social media.

AVB: No! I mean, as a kid I grew up listening to dance music thanks to radio. While riding my bicycle to school, I would listen to radio shows which I had recorded on these cassette tapes. That’s how I listened to music, because I was not old enough to go to clubs. I was 16-17 years old and I loved listening to radio. That’s what educated me, if you like. So I always promised myself, if I ever get the chance, I would start a radio show. And I did in 2001 when I got the right opportunity. And I remember a lot of people, some of my best colleagues and friends, said I was crazy to do a radio show. I am not going to mention any names, but some of my well known colleagues said, “You are crazy! A two – hour radio show?” And now these colleagues have their own radio shows.

What is in store for the next ASOT birthday?

AVB: We are already working on a new concept for 750, which is approaching pretty fast already, it will be early next year. Yeah, it is going to be another milestone, I want to do something else, something different. Because we started this off with the numbers, and we had special somethings for the round numbers. Now couple of other people are doing it as well, which is fine. But I want to move on and bring a new concept this time. Like what’s different this year is we have a festival, I mean I would be the first DJ who has his own festival, very proud of it. I never thought that A State of Trance would be that big of course, from a small radio show to its own festival. I think we will keep continuing with the festival concept, but we have to move on from there. 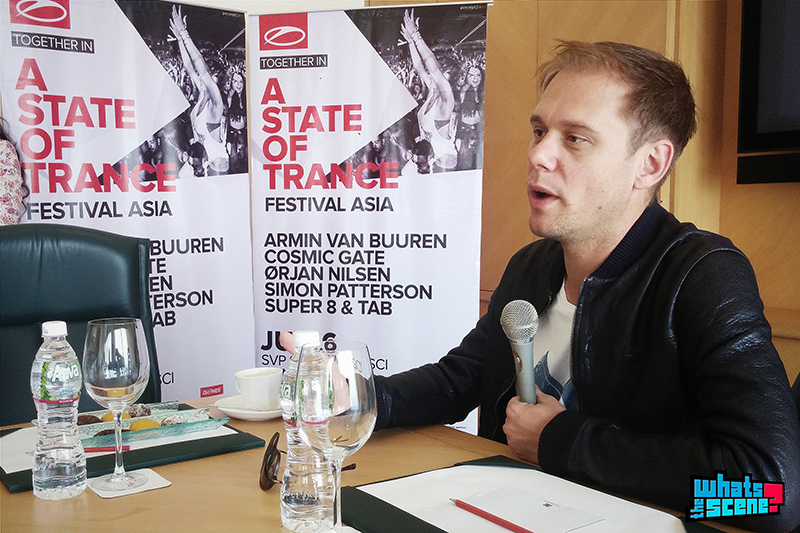 Have you heard of any Indian producers, and if you have, would you like to work with them in the future?

AVB: Yeah actually I have, in fact we just signed a guy; Sarthak his name is I think? We just signed him for Trice, which is a sub label of Armada. And I think there are many more Indian producers.

Anyone that stands out?

AVB: Not at the moment currently, from the top of my head. The thing is, when I play a track from a producer, I don’t care what country he or she is from. I am not looking at the name, like “Oh, this producer is from Spain! I should play him.” No, it’s because I like the music. So it doesn’t matter if the person is from India or Australia or America, if it’s a good track, it’s a good track, and that’s what I try to bring across.

What message would you like to give to the emerging trance artists in India?

AVB: Well, I want to start off by saying that it’s really amazing that there is so much support for Trance in India. Usually, a number of episodes for ASOT trend in several cities here in this country, which means there are many people listening to it online. And it really warms my heart because at the end of the day without the fans, without the Indian people, without you guys it would not be possible for us to be here, to do this radio show. It (the support) is a really great thing, and I’m really thankful for that. And for the upcoming Indian producers, I would say the same thing that I would tell any up and coming producer: Don’t be hung up on styles, try to be unique, look at others but try to make it on your own and hopefully I will see you soon at A State of Trance.