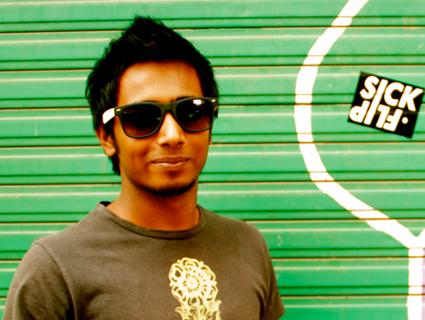 Sarvesh Srivastava is a 20 year old music producer and DJ from Mumbai, most famous for his work with Mental Martians. At the moment, Sarvesh is focusing on his collaborative solo project called Sickflip. Apart from playing shows across the country, hes also currently working on his album which will be released by the Dutch record label, Rub-a-duck records.

WTS: How did you get started in electronic music?

Sarvesh: I took a DJing and Music production course from this DJ friend of mine, after which I started making music electronically. I was making minimal and really experimental minimal sounds and when I listened to bass heavy music and when I heard it the first few times, I felt that this really gets me and I really want to do that.

WTS: Do you have any early training in music?

Sarvesh: Yeah, I learnt music rhythm and percussion instruments before I started electronic music but that led on to my interest in getting those sounds into electronic music.

WTS: The EDM scene in India is growing right now, what do you think needs to be done to bring out this kind of music more effectively?

Sarvesh: Well there should be more artists doing the same thing, more venues open for this kind of events and this kind of music, supporting the whole scene there should be more festivals and more awareness than there already is in the country about this whole bass heavy movement. The more the artists, the more the venues, and the better it is for us.

WTS: You spoke about festivals, there are a lot of festivals happening these days like the Sunburn Festival which is also the largest EDM festival in Asia; do you think such festivals are changing the trends in live music?

Sarvesh: Yeah, I think with all these festivals coming around, the exposure of live electronic music is increasing; its reaching out to more people. I mean, year after year youll see Sunburn having more and more people. So thats definitely a way of saying okay, there are more people getting associated and getting themselves accustomed to electronic music and other music, so its a good thing.

WTS: Last year, NH7 had a dub station although the music played there was more electronic music than just dub music. You (Mental Martians) were among the first artists in India to play dubstep, do you think people have gotten the idea slightly wrong?

Sarvesh: Well I think there needs to be a focus on this bass heavy movement and on the fact that this is not just any electronic music this is specially and specifically bass heavy music.

Dubstep would basically be the electronic dance music genre which was founded in the U.K. and most of the dubstep is 140 bpm, the signature styles of dubstep, the first beat has a kick and the third beat in a bar has a snare. Its basically bassline driven – the drops, the heavy intense drops. Now of course there are so many takes on dubstep from so many other producers in the world that its become a really big cult. But, when it started off it was really underground and really niche.

WTS: Recently Deadmau5 mentioned on his blog that when it comes to playing electronic music live theres no real skill involved, youre just pressing a button. What do you have to say about that?

Sarvesh: I think when it comes to performing electronic music, Id agree with the fact that you arent doing a lot apart from pushing buttons but you really need to know what buttons to push, when and how, because even though youre dealing with pushing buttons and not actually playing an instrument, there has to be a lot of thought involved in what youre doing behind the laptop. Youre not just pressing play and pressing stop.

WTS: What are the things you do when you go live to keep your set fresh?

Sarvesh: When Im playing under SickFlip, lets say, I have this guitarist with me who plays the guitar live, so Im actually manipulating his guitars live on this machine here, Im glitching up his guitars as soon as he plays anything live. With my machine there Im making fresh, live, impromptu sequences, loops and bars and beats and basslines and melodies, everything live. So its more or less like a semi live set where I am also playing different artists music and with the same button pushing, I am doing everything live.

WTS: Most EDM artists produce their record in the studio and play it on their live shows, is there anything you do differently to keep your live sets more interactive?

Sarvesh: To make my live shows interactive, I am not just playing tracks after tracks, say when I start off, its from the scratch, I start of from lets say two hi-hats and snare then I keep building on the grooves adding more sounds and everything on the spot and it builds on to a huge mesh of audio which I carry on, mix into other audio, etc. I like keeping my sets a little different from the usual DJ sets because I have played a lot of DJ sets only, but I like bringing the whole impromptu thing to the fore.

WTS: Weve seen EDM artists like Skrillex collaborate with Korn on their new album; can we expect such collaborations here with local bands and musicians?

WTS: Do you carry your own visuals for your live sets or is it something you leave to the organizer and the venue?

It should go completely hand in hand and complement each other, which is how you create a nice experience. Youre listening to something, grooving to something, experiencing something, looking at something, I want to incorporate all the visual elements in my sets but thats to come. I have visuals I pick out from the city whenever I have the freedom. I definitely do that, I prefer having them on board for my gigs.

WTS: So tell us, hows your album coming along?

Sarvesh: The albums coming along good. I have two tracks ready and its going to be released on Rub-a-duck records in Netherlands, which is a part of the Black Hole records.

WTS: Youve released an EP with them too, havent you?

Sarvesh: Yeah, Ive released an EP with them already which is a single of mine but I am also working on an album which is also on Rub-a-duck records.

WTS: So whats the road ahead for you personally from here?

Sarvesh: Well, I want to make a lot of music (which is not just centered on one genre) experimental as well as electronic, have a lot of collaboration projects, I wish to do a lot of shows – not just the usual shows but I have a lot of ideas for live gigs in mind.