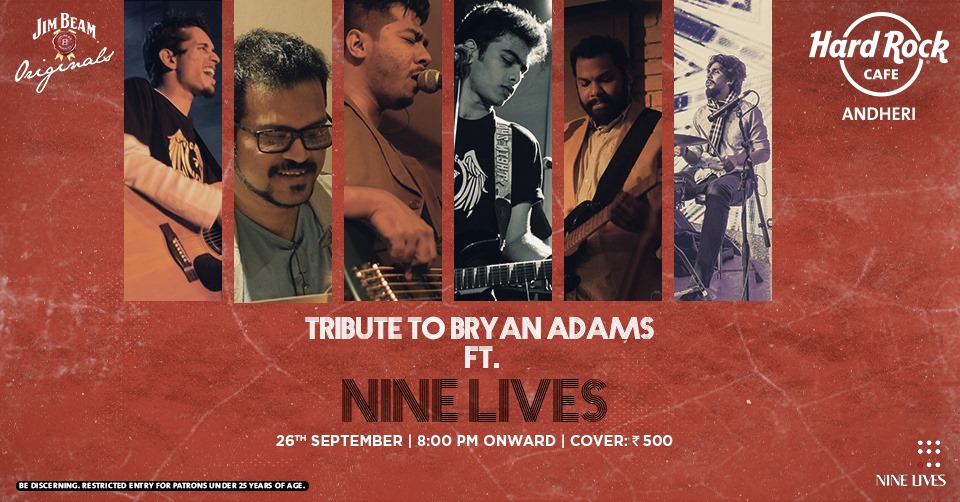 Nine Lives, a Mumbai based band is making music with a message! Enthralling its audience with the finest eye for detail in sound, presentation and approach. Watch them pay their respect to one of the greatest musicians of all time, Bryan Adams, only at Hard Rock Cafe, Andheri on September 26th, 8:00 PM. 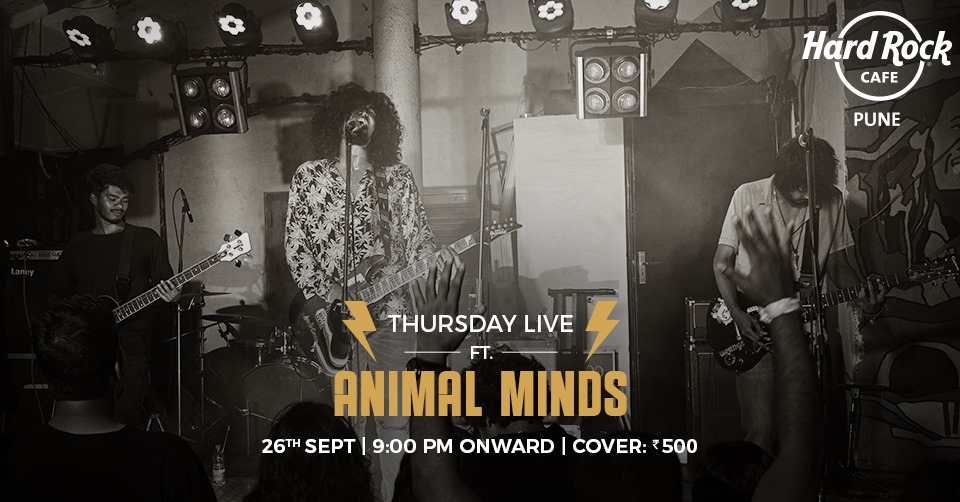 Pune based band – Animal Minds is a mix of grunge, Stoner Rock/Desert Rock and Funk. Nirvana, Pearl Jam, Alice in Chains, Soundgarden, Aerosmith, Zeppelin, Sabbath, STP, Hendrix Experience, RHCP, Oasis are the few bands they dig and study. The band is coming to Hard Rock Cafe, Pune and bringing the whole vibe from the 90s’. Come figure out the Animal Minds on the 26th of September! 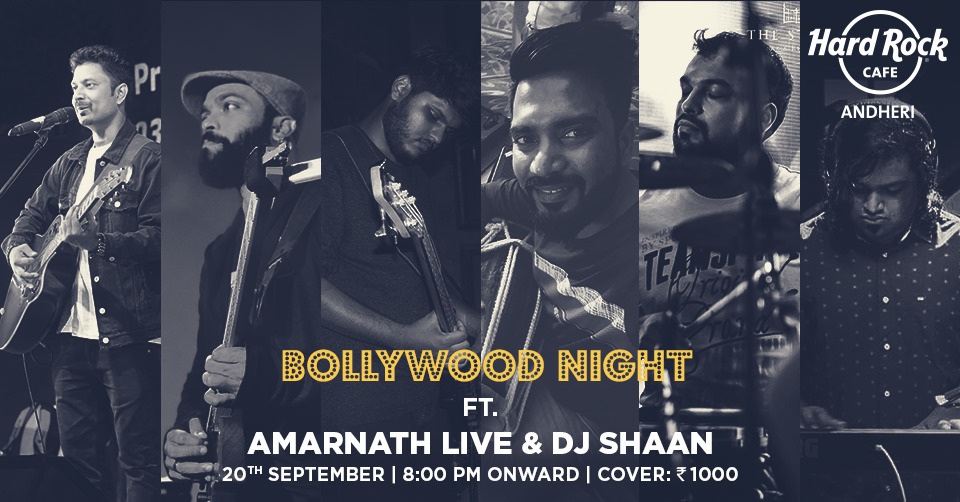 Amarnath, an Indian singer and live performer, along with DJ Shaan is coming to Hard Rock Cafe, Andheri for our Bollywood Night on the 20th September. Join us for the best of Bollywood music. 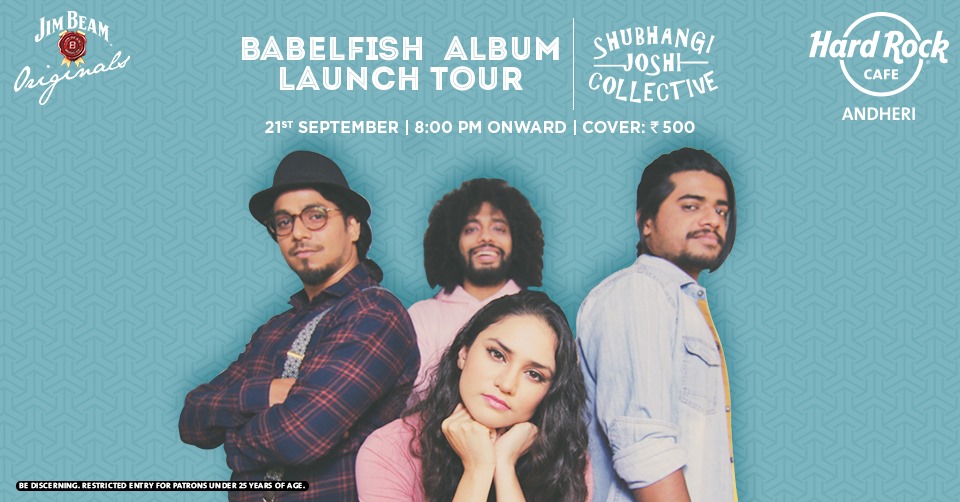 Treat yourself to a night of fresh indepedent music with one of the country’s most exciting indie acts, Shubhangi Joshi Collective, and celebrate the launch of their much-awaited debut album, Babelfish!
Having performed in cities across India and the US, The band enjoy engaging their listeners with fresh and often unexpected songwriting themes. Having completed a successful pre-launch 3 city tour (Los Angeles, San Francisco, Utah) of the US for Babelfish late last year, they’re coming to Hard Rock Cafe, Andheri on the 21st of September. Don’t miss out on this!

The Shubhangi Joshi Collective is: 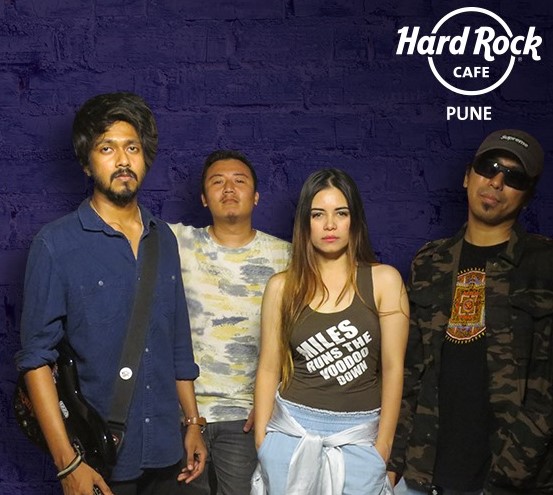 Pune based roots/rock/reggae, funk, dancehall band with a fresh, organic, soul driven sound, best experienced live. Join us to watch them perform live on the 19th of September, 9:00 PM onward. 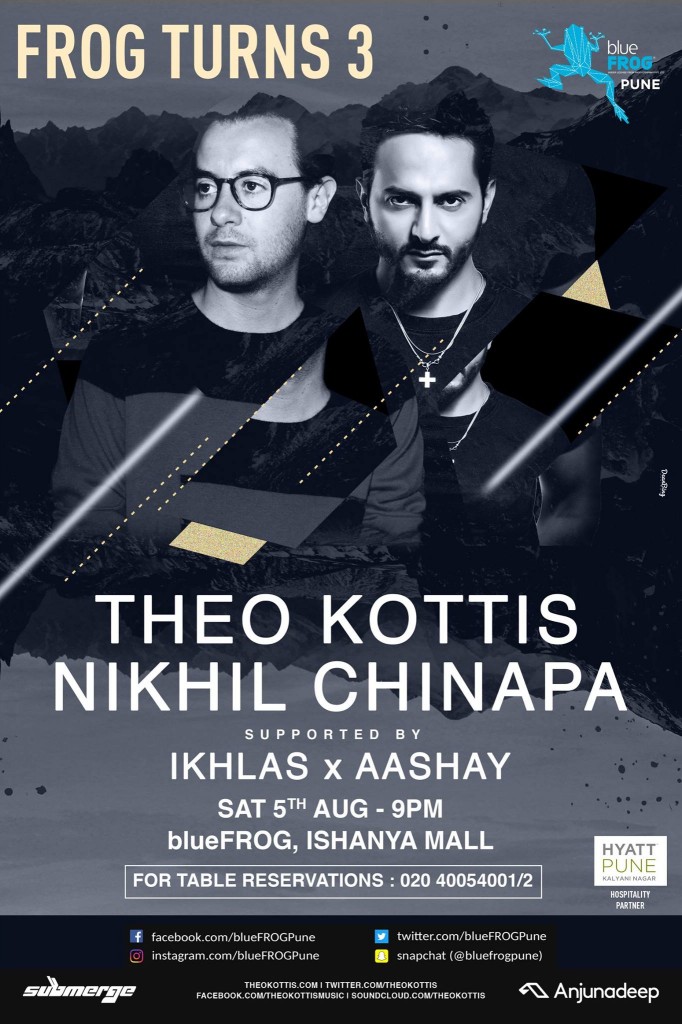 Nikhil Chinapa
To say that Nikhil Chinapa has donned many an avatar during his career, is like saying it snows in Alaska; a bit of an understatement. He morphs from DJ to VJ to MC to Music Promoter to Festival Director some of his best known avatars  with amazing fluidity.
He studied Architecture and graduated with a Thesis in Hospital Design. A year later and for reasons that scientists are still trying to understand, Nikhil joined MTV. He said, “I think it’ll be fun.” For once, he was right. At MTV, Nikhil has hosted almost every show the channel has aired. From MTV Select – MTV’s longest running show, (it aired continuously for 10 years) to being the host of Splitsvilla, a judge on Roadies as well as Rock On and now host of MTV Mashups. Nikhil’s Mom still thinks he’s an idiot though and should get a real job. As a popular VJ, Nikhil got to spend a lot of time around his first love, music. In 2001, a conversation between friends resulted in the launch of Submerge  India’s first, and now largest Indian Electronic Dance Music (EDM) company in India.By now, Nikhil had begun to DJ professionally and plays, well… whatever he feels like. His sets are moody, varied, often erratic but usually fun. Most of his sets feature frantic foot-stomping and the random flailing of arms – sometimes by him. They also feature music – the kind that has a repetitive monotonous beat and is best enjoyed at dangerous decibel levels.
Nikhil was also the co-founder of Sunburn. He is now the Festival Curator and partner of Vh1 Supersonic, Goa’s brand new beach music festival.

Theo Kottis –
Summer 16 is shaping up nicely for Theo Kottis; with upcoming EP releases on Anjunadeep, Moda Black, and Sashas Last Night On Earth, plus a slew of festival dates scheduled  he is certainly living up to the hype, created by none other than Pete Tong. Coming from humble beginnings, he has learnt his craft amongst legends at renowned venues, including as a resident at Glasgows Sub Club. Having DJd alongside Jamie Jones, Tale Of Us, Seth Troxler and David August and being able to count the likes of Pete Tong, Solomun and Simian Mobile Disco as fans, Theo has established himself as one of the UKs most exciting emerging talents.
Gradually gaining the recognition he deserves from the likes of Solomun, Skream, Adam Beyer and Pete Tong, 2014 saw Theo Kottis make an exciting entrance onto the scene, with his EP Waiting Game storming the Beatport Electronica top 10.
Based in Edinburgh, Kottis, who’s a key cohort for dance music collective, Moda Black, not only dropped his debut EP, Waiting Game, on the Jaymo & Andy George he..
Sometimes dark, sometimes uplifting, always emotive; Theo is truly obsessive about his approach to music. As a DJ hes already performed at Rockness, T In The Park, Hideout and Glasgows legendary Sub Club, and thats purely down to his talents in the booth. Now, with a blossoming production career, Theo has found a whole new way to convey his passion for music and convert his wide range of influences and experiences into substantive club compositions. 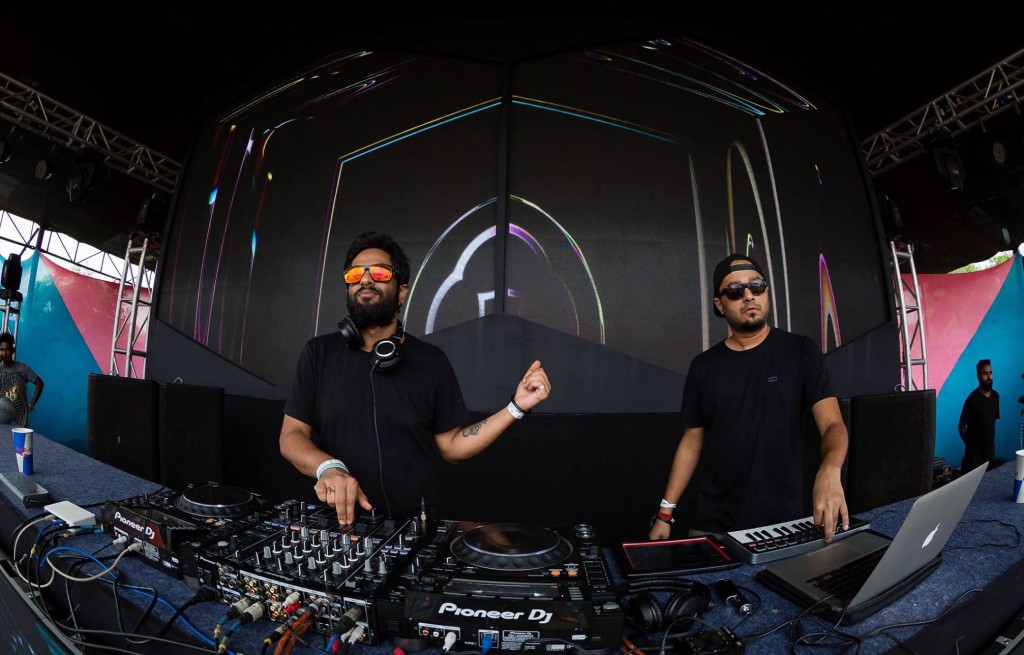 Loose is a project consisting of Arjun Gandhi and Vaibhav Bhavsar. The objective of the project is to amalgamate a distinct mix of House & Techno music beautifully layered with deep groovy live sounds. Now these forces combine to create a totally different experience with lots of live samples and loops. They recently performed at Amsterdam Dance Event (ADE) in Holland apart from playing other gigs there, The GO:MADRAS Electronic Music Festival (2015 & 2016) and also in the 2015 edition of SUNBURN Festival.

?Loose Toons will be accompanied by Akhil. 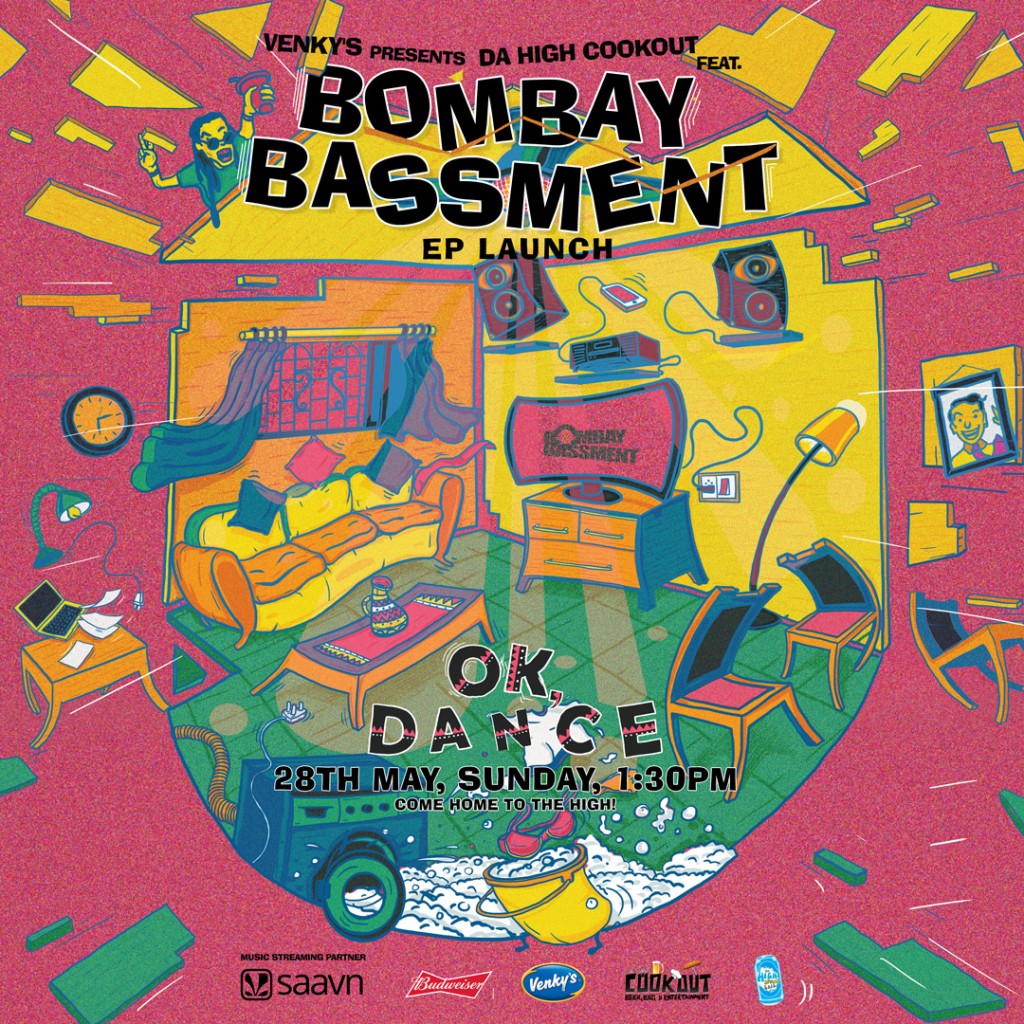 Bombay Bassment is a 4 piece eclectic band from Bombay, India formed in 2010. The lineup consists of MC/Rapper Bob, Drummer Levin, Bassist Ruell and Chandu (DJ/Samples). Their music is an upbeat blend of Hip-Hop, Rap, Reggae, Funk & Drum n Bass. Each member has varied influences & backgrounds making the sound of the band very unique.

Bob is a veteran MC and DJ originally from Kenya, his destiny led him onto the Mumbai scene over 12 years ago. Formulating his lyrics and sound around the rhythms of his life, Bob brings a distinctive flavor to the dance-floor. Levin & Ruell are the original founders of Bombay Bassment and have been active on the Indie scene for the past 8 years! With 15 years of experience, Chandu started off as a resident DJ at landmark clubs in Mumbai and is currently the co-producer of Bombay Bassment along with Deep, founder of Indiaudio (an Independent music label). 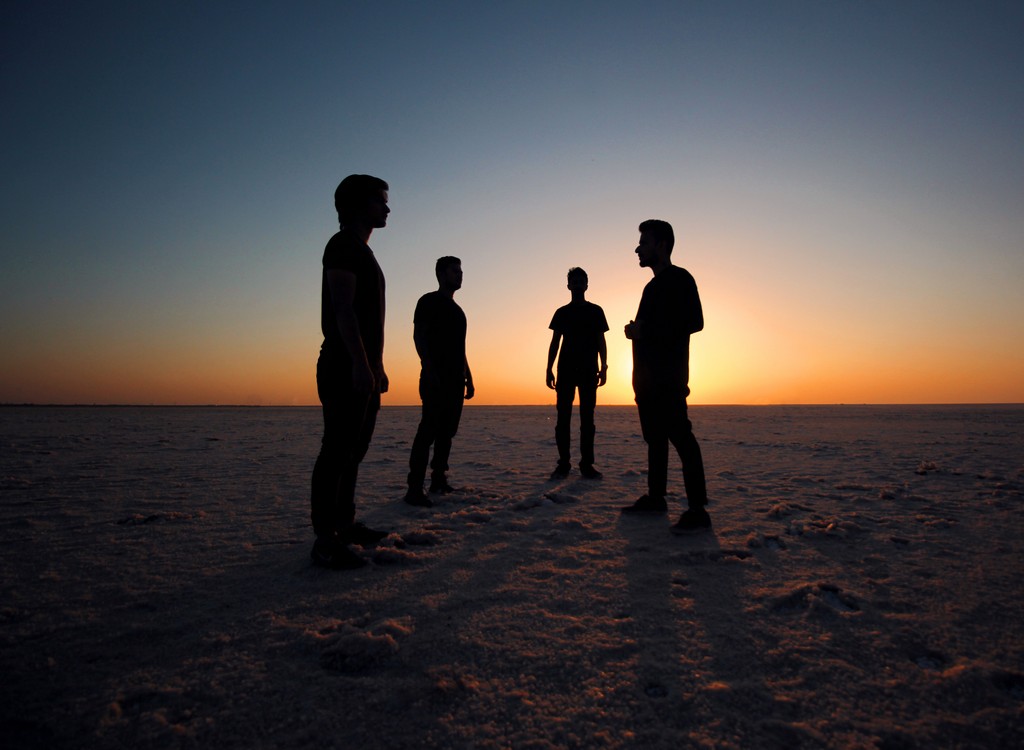 Aswekeepsearching has been turning heads and perking up ears over the world for a while now, spreading a message of positivity and good times in a way only they can, while keeping their feet planted firmly on the ground. Hailing from sunny Ahmedabad, Gujarat, formed in 2013, the outfit comprises of vocalist/guitarist Uddipan Sarmah, guitarist/keyboardist Shubham Gurung, bassist Bob Alex and drummer Gautam Deb.
2015, the year of the launch of aswekeepsearching’s first full length release titled ‘Khwaab’, was the start of a change in Indian independent music. Intriguing and enamouring all that they touch with their sound, the band has joined ranks amongst the most sought after acts in the country. Their music is an aural painting, cathartic and unbiased, vividly colourful and infinitely kind. From the first bar of the music till the curtain drops, it is apparent that the four members, fuelled by idealism and the drive to build something beautiful, are set out to move mountains.
The quartet brought us Khwaab, and Khwaab brought them Zia. The newest album, Zia was conceived over the following year the band spent touring and promoting  Khwaab, and it is the culmination of their shared experiences  the wonderful, the bittersweet, the hell and high water has been funnelled into the eleven track album. The album also sees the use of instruments like the Violin, Viola, Cello, Sitar and the Tabla, having collaborated with like-minded artists on some songs, who’ve added their own unique colour to the bands soundscape.
aswekeepsearching have a plethora of memorable highlights, having performed at notable music festivals, some of which include all three editions of the NH7 Weekender 2016, Ctrl Alt Del, Into the Void, Indie March, and many more; sharing the stage with the likes of Steven Wilson, 65daysofstatic, Tides From Nebula, Blackstratblues, Karsh Kale, I am waiting for you last Summer, and many more. The most engaging  experience was the launch tour for ‘Khwaab’. Right after the album came out under the Russian record Label ‘Flowers Blossom In The Space’, the band went on a 5 city tour in Russia performing in venues like the St. Petersburg Opera House and the Red Concert Hall in Moscow, immediately followed by a 6 city tour in India.