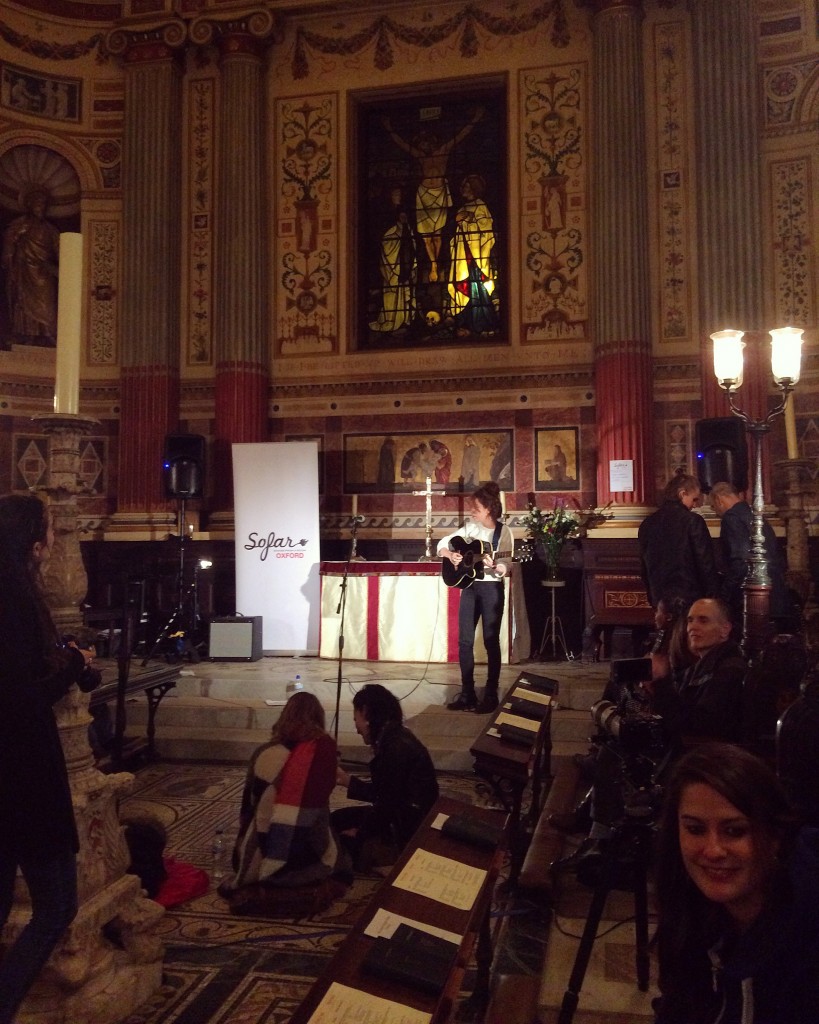 On Tuesday night Worcester Colleges darkened grandeur lit up. Since its set up in 2010, Sofar Sounds  or Songs from A Room  has exploded into a global organization, and now spans 300 cities worldwide. The format is secret, unplugged performances for audiences and artists jaded by the conventional gig experience. Past lineups have ranged from the undiscovered to James Bay: anything can happen.

The Oxford branchs January edition was underscored by the intricate beauty of Worcester chapel. Its golden interior is adorned with illustrations on the theme of creation (including, allegedly, a flying dodo), and encourages a generous, reverberant acoustic.

Up first, London girl Maggie Zenwa (MagZen) describes her sound as Psychedelic Acoustica folk. Her style encompasses spoken word and melodic chants, accompanied by harmonies and a hammering beat from the strings of her guitar (which she holds horizontally). Last night perhaps wasnt the greatest demonstration of her unique musical character. In the magnificence of Worcester chapel Zenwas artistic conviction appeared shaky and haphazard. Her haunting style is potentially hypnotic and bewitching, however the delicate techniques werent kindly received by the acoustics, nor were they particularly polished in their execution. Catch her on another day, in a different space and she may charm you, but yesterday her delivery dulled the fire her lyrics were trying to ignite. She might want to free the mind/kick the grind, but MagZen didnt quite spark the uprising she spoke of.

In contrast, self-proclaimed Sofar addict Marie Naffah next took to the stage with confidence, and for good reason. Naffahs song writing is without a doubt her greatest asset, and she performed her originals with quiet pride. Lyrically shes intelligent, earnest and unpretentious, and theres something very Ellie Rose about her approach.

Her opening number Peter and Wendy (a futuristic take on the childrens story) instantly charmed the Oxford audience. A heart-wrenching tale where the two characters fall out of love, Naffah pitched fairtytale innocence against brutal reality. This she followed up with an angsty mash-up of Shes a lady (Jones) and Señorita (Timberlake), and two further originals (David Gray and This Road). All gorgeously crafted, save for one lyrical mishap.

Unfortunately Naffahs vocals and guitar skills sometimes dont quite match her abilities as a songsmith. Her gentle lower-range tone is mellow and warm, but sporadic brassy top notes often intrude. On the whole however, her performance was slick, suave and sassy.

Six-man band, The Fusion Project delivered the nights third set to whoops and cheers from the Sofar audience. Nothing beats the originality of their formula, which combines elements of Indian classical music with western pop.

Once the initial novelty had subsided, however, technical weaknesses in the Western elements (particularly the lead vocals and cello) tarnished the performances shine. The group played it safe with accessible covers of I See Fire (Sheeran) and Hallelujah (Buckley), which frustratingly managed to make a cliché of a unique concept. By the arrival of their finale (a unimaginative rendition of Adeles Hello), we reached overkill. Their original material however, was a much better illustration of the ensembles strengths, in particular the beautiful Carnatic and Hindustani vocals from Krishnaprasad K.V. and Dhruv Sarma.

That said, The Fusion Projects passion and joy of their art was amazingly potent, and held the performance tightly together. Front man Rushil Ranjan explained that exposing people to Indian classical music is a really big part of what we do, and that they do incredibly well.

If you were to boil down the sounds of Stornoway, Fleet Foxes and Bon Iver youd get the musical essence of Duotone, the evenings finale. Knowing how to play is a skill. But knowing when not to play is an even greater one, and folk singer-songwriter Barney Morse-Brown topped the bill with a set of wholesome simplicity.

Having previously collaborated with the likes of multi-platinum artist Birdy, he demonstrated his skills as an accomplished guitarist, cellist and loop pedal wizard alongside effortless vocals. Morse-Browns lyrics are intimate and pure. At one point he captured, oddly but poignantly his love for a Little White Caravan. Understated but self-assured, Duotones charisma stole our hearts.

The beauty of Sofar is its mission to offer supportive, appreciative platforms for emerging musicians across the globe. This freedom to experiment produced a January lineup full of refreshingly new, explorative ideas. Perhaps they were executed with varying degrees of success, but that didnt matter. Informal really works – big respect to Sofar.