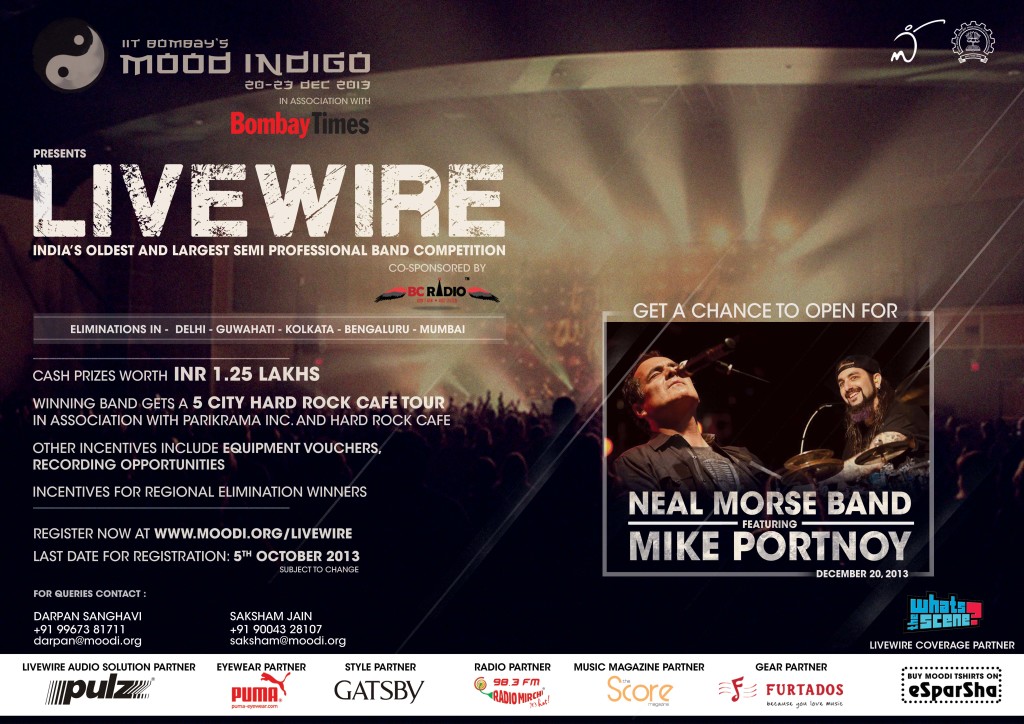 One of Indias best semi professional rock band competitions  Livewire, is all set to rock the nation once again this year. A part of Mood Indigo, the cultural fest of IIT Bombay which happens to be Asias largest of its kind, Livewire has completed over 3 decades and churned out some of the best rock music talent in India which includes bands like Parikrama, Bhayanak Maut, Zygnema, Slain, Demonic Resurrection, Vayu, Zero, Something Relevant.

Apart from the very lucrative cash prizes, the highest in the college circuit, this year there is something in store even for the regional winners. The finalists will get to open for the Neal Morse band featuring Mike Portnoy in the Livewire Nite of Mood Indigo, go on a 5-city Hard Rock Café tour apart from an opportunity to record its album and equipment vouchers. The regional winners will get to perform in some of the best concerts in their city and will also get to record their own albums.

Adding Guwahati to its list, the competition will hold regional eliminations for the first time in North East. Darpan Sanghavi, the head of Pronites which conducts this competition said, We believe that North East is a storehouse of the best talent in music and this year we will go out of our way to get them into our competition. Our ideology this year is to increase the level of the competition as a whole and provide a great experience for the audience as well. He expects a much greater turnout as compared to last year in the cities of Mumbai, Bangalore, Kolkata and Delhi.

There are plans to bring in the headliners in the regional eliminations as well. The regional eliminations have a backing of an well-planned publicity campaign with both on ground and online components. Street publicity teams have been formed which consists of bands, musicians and jam room owners. Sanghavi adds, These teams will help us penetrate this competition deeper into the music circuit. A series of online mailers and association with platforms such as Whats the Scene will help spread the information across to the masses.

The competition has a four tier structure. The first is the online eliminations in which the bands will have to upload their music on www.bcradio.in after which will follow a series of eliminations, regional rounds, the semi finals in IIT Bombay and the finals in the Livewire Nite.